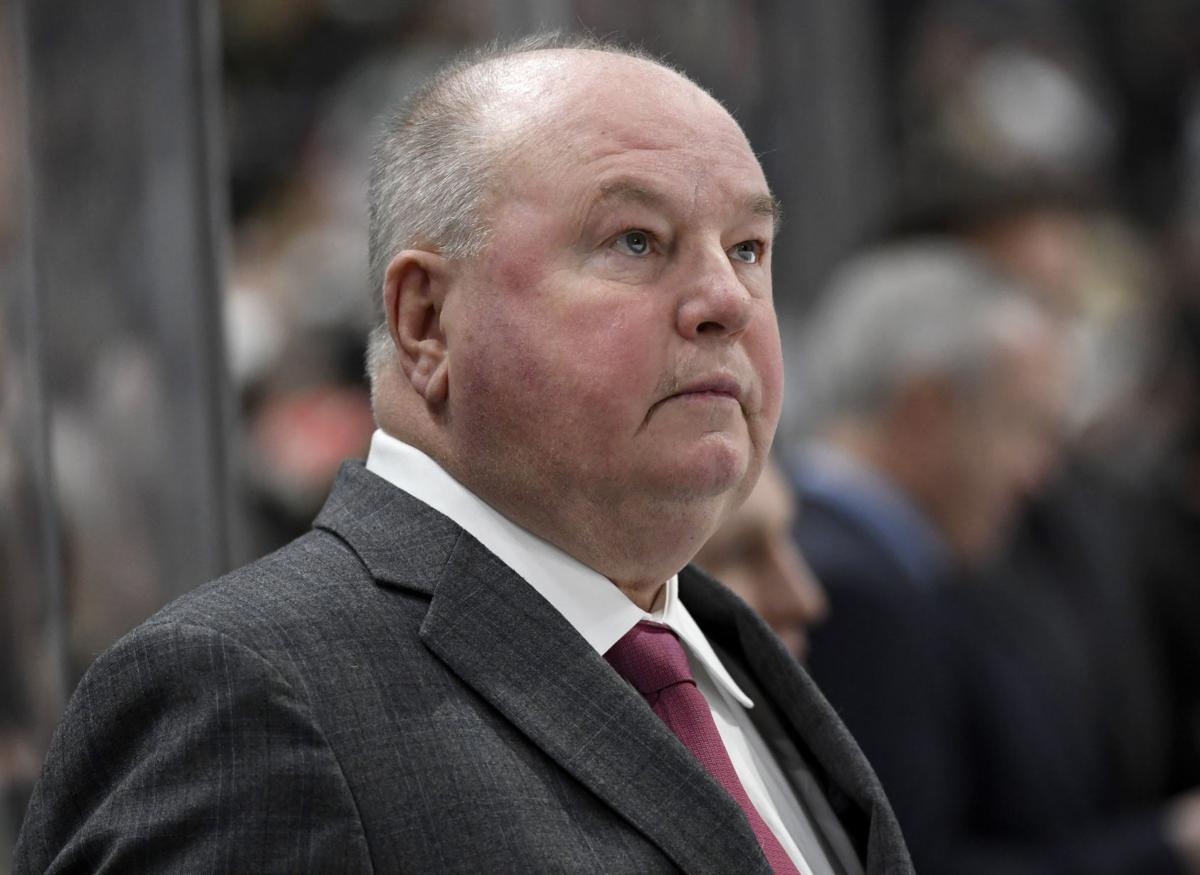 Minnesota Wild head coach Bruce Boudreau watches from the bench as his team plays against the Tampa Bay Lightning on Jan. 16. Boudreau was fired Friday morning after the Wild blew a two-goal lead to the Rangers Thursday night.

ST. PAUL — Wild coach Bruce Boudreau was fired Friday morning and will be replaced, on an interim basis, by assistant Dean Evason.

Boudreau, in his fourth season, got the word he was being dismissed at Tria Rink from first year general manager Bill Guerin.

“The most important thing is the players are going into this stretch run on a high, and I felt like they just needed a different voice right now,” Guerin said at a news conference.

“I expect this team to compete for a playoff spot. I think maybe some adjustments or a different voice that Dean will bring will help the guys.”

The Wild, which has points in eight of its past 11 games, blew a 3-1 third period lead Thursday night at Xcel Energy Center and lost 4-3 to the New York Rangers in a shootout. It is 27-23-7 this season and has 61 points, three short of the final playoff spot in the Western Conference.

“Last night was a game we should have won,” Guerin said.

“It’s not one win, one loss, one week, it’s a series of things. I just felt the timing was right. … If players are hurt by this, then maybe they’re players we shouldn’t have here.

“There has to be accountability, and people are going to be held accountable.”

“You have to be who you are and you have to do what you believe in when you get these opportunities,” said the 55-year-old, who has been a head coach in juniors and the minors, but never in the NHL.

Players were surprised by Boudreau’s firing.

“We didn’t really expect that,” said defenseman Ryan Suter. “The team had been playing well.”

“We have a lot of respect for Bruce. He was a great guy and a great coach. It’s sad to see him go. ... We were still responding to Bruce. At the same time, if Billy thinks other guys need to get going more, maybe a new voice will help certain things.”

Leaving a legacyThe 65-year-old Boudreau, who declined to comment Friday, is one of the most popular coaches in NHL history. He has the second-best winning percentage (.576) all-time at among those who have coached more than 600 games, behind only Hall of Famer Scotty Bowman (.581).

In 984 games behind the bench for Washington, Anaheim and the Wild, Boudreau has 567 victories (22nd in NHL history), 302 losses and 115 overtime losses ... the latest of which was the last straw for Guerin and Wild owner Craig Leipold.

“Bruce had an outstanding four years here,” Guerin said. “He’s done a lot of good things with this team. He brought them to a different level, I believe.”

The team missed the playoffs last year, and Leipold fired GM Paul Fenton after one season.

Serving out the seasonGuerin said Evason would coach the remainder of the season and a full coaching search would take place; Evason would be a candidate for the full-time job.

“The one thing I really do like about Dean is his passion, his fire for the game,” Guerin said. “I am hoping that that translates to the players. I think these guys really like Dean a lot.

“He goes at the game just like he played, and that’s aggressive and with a lot of passion and emotion. I have confidence in him.”

Boudreau, who is the eighth NHL coach to lose his job this season, made the playoffs four times with both Washington and Anaheim.

He was in the final season of his four-year coaching contract with the Wild; there was a contract clause for Boudreau to continue as a consultant for two seasons after the four years as coach.

Stressing accountabilityEvason played for five NHL teams and had 139 goals in 803 career games. The native of Flin Flon, Manitoba, was head coach of the Milwaukee Admirals for six seasons before becoming Boudreau’s top assistant last season.

The Admirals were Nashville’s top affiliate in the American Hockey League.

“We want the group to be accountable and aggressive,” he said. “If we make a few mistakes because we’re aggressive we can live with that, but not if we are passive. Last night as an example, we were too passive.”

After Thursday night’s loss, Boudreau said, “We need 18 players and a goalie to play great, and we didn’t have all 18 players playing at their best.

“It seems like we have a tendency to sit back and let the other team bring the play to us. When that happens, prevent defense doesn’t prevent anything.”

The Wild has the eighth-worst goals-against average (3.19) and seventh-worst saves percentage (.897) in the league.

“I kind of feel responsible,” said Alex Stalock, who was in goal Thursday night. “I let a two-goal lead get away. Makes you wonder that if I had made that last save, maybe this would have just been an upbeat practice day.”

Said goalie Devan Dubnyk: “Understand that part of it is on us as players. I know if I played better this year then we’d be in a different scenario and Bruce might still have a job.”

A police standoff in a Winona neighborhood that reportedly lasted several hours Saturday evening could be the result of multiple shots fired, …

A police standoff in a Winona neighborhood that reportedly lasted several hours Saturday evening could be the result of multiple shots fired, …

Minnesota Wild head coach Bruce Boudreau watches from the bench as his team plays against the Tampa Bay Lightning on Jan. 16. Boudreau was fired Friday morning after the Wild blew a two-goal lead to the Rangers Thursday night.