Get the daily forecast and severe weather alerts in your inbox!

If it’s going to be cold, it’s probably right now.

On average, mid- to late January sees our coldest temperatures of the year in the Midwest. Right on schedule, it’s been pretty cold across the region this last week and below normal temperatures look to continue into the coming week.

But it could be worse. Let’s look back at the some of the coldest arctic outbreaks to ever hit the Midwest, based on data from the National Weather Service and National Centers for Environmental Information.

Since each location has seen its coldest temperature at different times, there’s no good way to specifically rank cold waves. However, by looking at the lowest temperature ever recorded in each state, you get a pretty good idea of which arctic blasts were the worst. These five, listed in order of occurrence, stand out above the rest.

While it’s not the coldest for all, this cold air outbreak probably has the strongest case for being classified as the worst.

The arctic air pushed south and set record cold temperatures in Texas, Louisiana, and Florida that still stand to this day as well. In total, it’s responsible for more low temperature records than any other cold spell in U.S. history. It was so cold that the Mississippi River was completely frozen over north of Cairo, Illinois, and ice flowed all the way into the Gulf of Mexico. Snow fell all along the Gulf and East Coast, including Florida, where snow was reported as far south as Fort Myers, Florida.

This is the only December arctic outbreak to make the list. It’s certainly worthy though, due to its length and extent. Frigid air was already in place in mid-December, but the coldest was yet to come.

Ninety years after setting its state record, Nebraska would again see thermometers hit minus 47, this time in Oshkosh on Dec. 22. Scottsbluff, Nebraska, wasn’t far behind with a low of minus 42 that morning.

Other cities in the Midwest saw their all-time coldest temperatures including Kansas City, Missouri and Topeka, Kansas. Many more cities saw their coldest December temperatures, particularly across Central Illinois, where most cities reached 20 below zero or colder Dec. 22 and 23. This cold blast drew the most headlines for what it did across the South though. Freezing temperatures reached all the way to Miami on Dec. 24 and 25, and the Southeast Coast saw its largest snowstorm in history.

Perhaps the worst cold wave for the eastern part of the Midwest came in 1994. The temperature fell to minus 36 in New Whiteland, Indiana, on Jan. 19, setting the record for the lowest temperature ever recorded in the state.

Large parts of Indiana and Ohio saw temperatures of minus 20 or colder that morning. Indianapolis (minus 27), Columbus, Ohio (minus 22), and Cleveland (minus 20) saw their coldest temperatures ever.

The rest of the Midwest was not spared. Minneapolis-St. Paul stayed at or below zero for 142 hours, and all public schools were closed across Minnesota on Jan. 18.

In Chicago, the temperature dipped to minus 21. Thousands lost power and water in the city after multiple water lines burst. The cold and snow impacted the Mid-Atlantic and Northeast as well. Over 100 deaths were caused across the U.S. by this arctic blast.

This cold air outbreak was particularly bad in Minnesota, Wisconsin, and northern Iowa, with many locations seeing temperatures fall into the 30s below zero for lows and staying in the teens below zero for highs.

On Feb. 2, temperatures tumbled all the way to minus 60 in Tower, Minnesota, and minus 55 in Couderay, Wisconsin. Both of these set new records for the coldest temperature ever recorded in their respective states.

From Feb. 1-4, the average four day temperature was minus 18 in Wisconsin and minus 24 in Minnesota. In Rochester, Minnesota, temperatures stayed at or below zero from 6 a.m. Jan. 29 until midnight Feb. 5.

The most recent arctic blast on this list, it’s the only one so far this century to match the intensity of those in the 1990s.

After a significant snow for many, frigid air poured in across the region setting up two very cold days. On Jan. 30, the combination of very cold temperatures and gusty winds caused astounding wind chills that morning. From Central Illinois to Eastern North Dakota, many saw “feels like” temperatures reach 50 to 60 degrees below zero.

Chicago hit a low of minus 23 with a wind chill of minus 52, the coldest since 1985. The morning of Jan. 31 saw lighter winds, but even colder temperatures for some.

The states with the most expensive natural gas prices

States With the Most Expensive Natural Gas Prices

Matt Holiner covers weather and climate across the Midwest. Matt has eight years of professional meteorology experience and has forecast every type of weather for cities across the country. He holds the National Weather Association's Seal of Approval.

Get the daily forecast and severe weather alerts in your inbox!

With a warm front and slow moving cold front working across the state, the weather is looking quite stormy through Friday. Severe storms are expected in spots. Here's everything you need to know.

A Tornado and Severe Thunderstorm Watch have been issued for parts of Minnesota and Wisconsin until 10 p.m. Thursday. Damaging wind, hail, and tornadoes are expected in spots. Here are the details.

Watch now: Not much rain today, but showers and storms likely across Wisconsin Wednesday with a big temp difference

With a warm front moving across the state, temperatures are going to vary significantly on Wednesday. Rain also looks likely with a small chance of severe storms. Here's the latest information.

Showers and storms likely across the state today, but the rain chance won't be going away completely for the weekend. See when rain is most likely and how cool it will get in our updated forecast.

Rain likely for all of Wisconsin today. Storms are expected in the southern part of the state and a couple could produce hail and damaging wind. Chief Meteorologist Matt Holiner has all the details.

Bad news for hurricane season: Loop Current, monster storm fueler, looking a lot like it did in year of Katrina

With La Niña helping clear the way for a busy hurricane season, this wide current of warm water could spell disaster for the northern Gulf Coast.

Temperatures in the 60s are expected for the Winona area. It should reach a comfortable 69 degrees. Today's forecasted low temperature is 44 d…

Today's temperature in Winona will be warm. It looks to reach a mild 76 degrees. A 57-degree low is forecasted. Rain is expected for this Thur…

Folks in the Winona area will see highs in the 60s today. It looks to reach a pleasant 60 degrees. Today's forecasted low temperature is 40 de…

Highs in the 50's are expected today in the Winona area. It looks like it will be a chilly 57 degrees. 39 degrees is today's low. We will see … 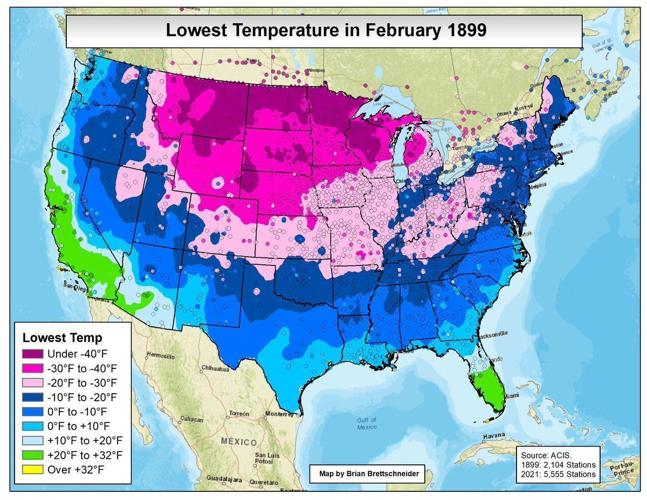 The lowest temperatures recorded across the country during the February 1899 cold wave. 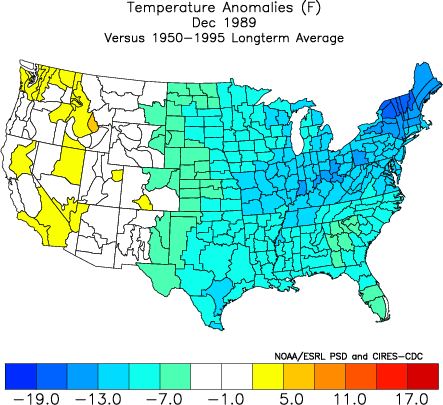 December 1989 ranks as the fifth coldest December on record in the United States. Average temperatures were well below normal for the eastern two thirds of the country. 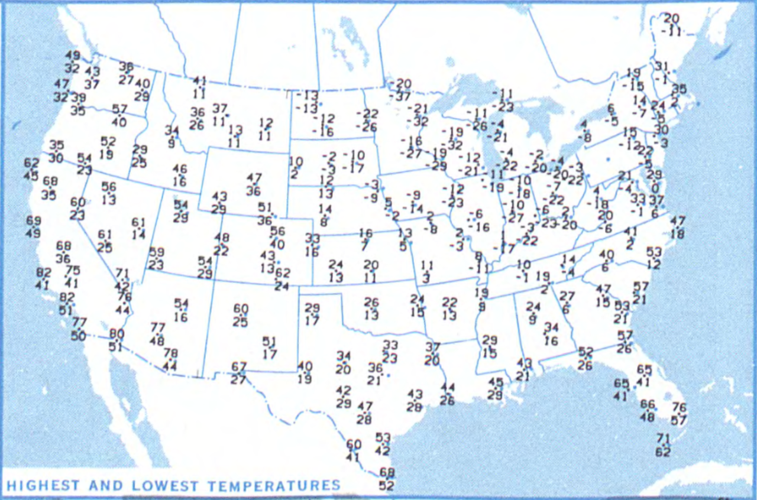 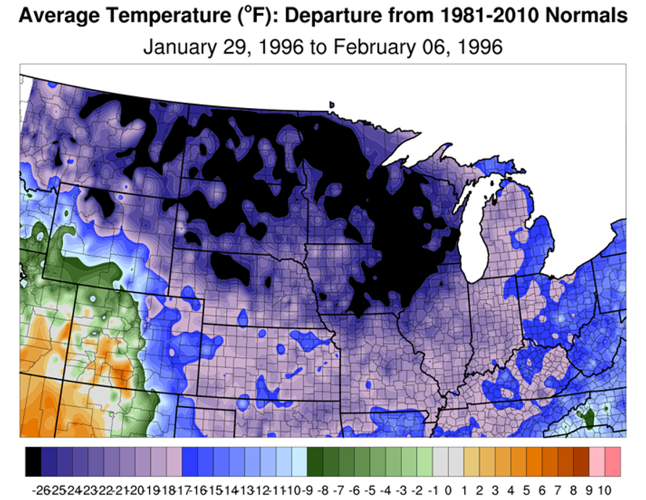 Temperatures were well below normal across the Midwest during the February 1996 cold wave, especially in North Dakota, South Dakota, Minnesota, Wisconsin, and Iowa. 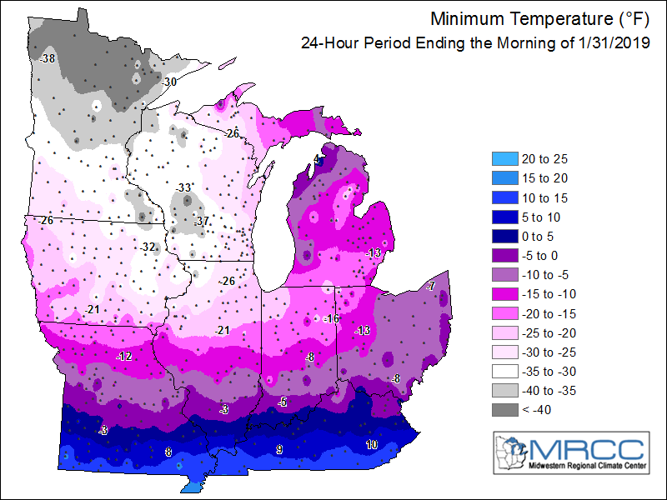 The coldest temperatures recorded during the January 2019 cold wave. 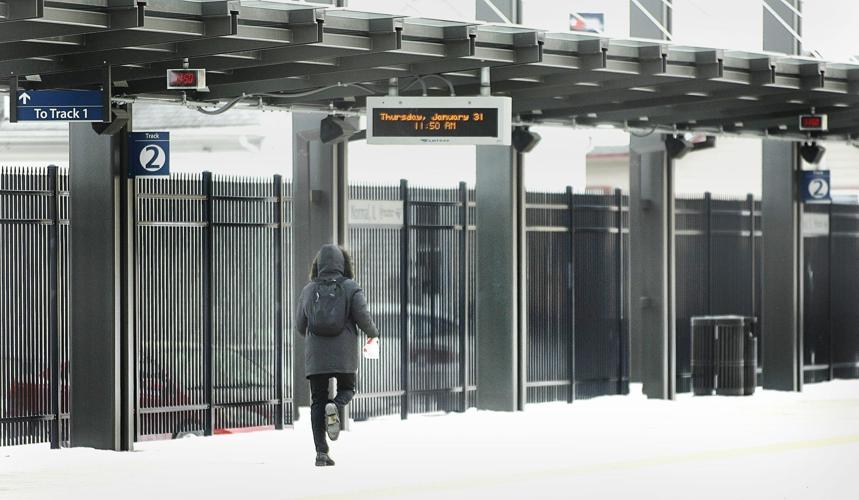 A commuter runs through the cold with his lunch along the board ramp at Uptown Station in Normal, Illinois, on Jan. 31, 2019. 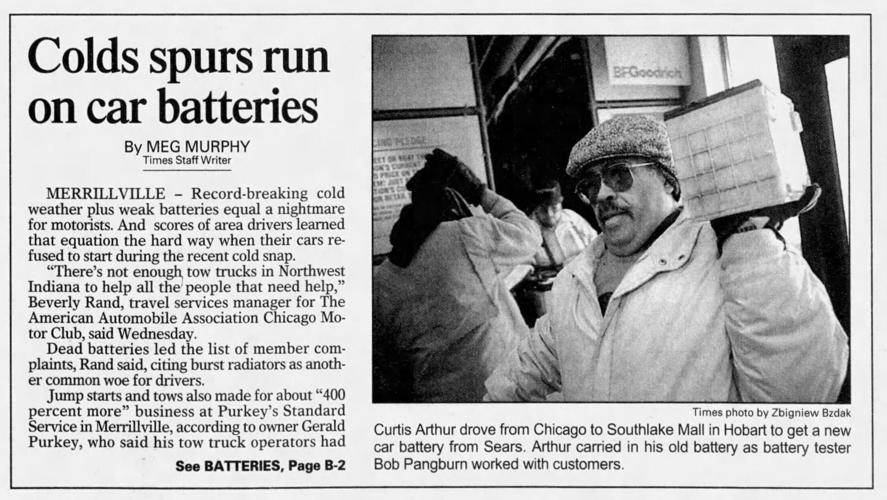 This article from The Times of Northwest Indiana on Jan. 20, 1994, shows effects of extreme cold in the area. 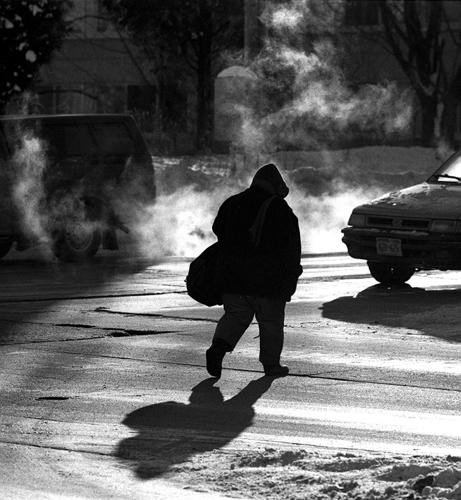 A pedestrian walks through the intersection of Johnson and Park Street in Madison, Wisconsin, on Feb. 2, 1996, when the region was experiencing a bitter cold snap. 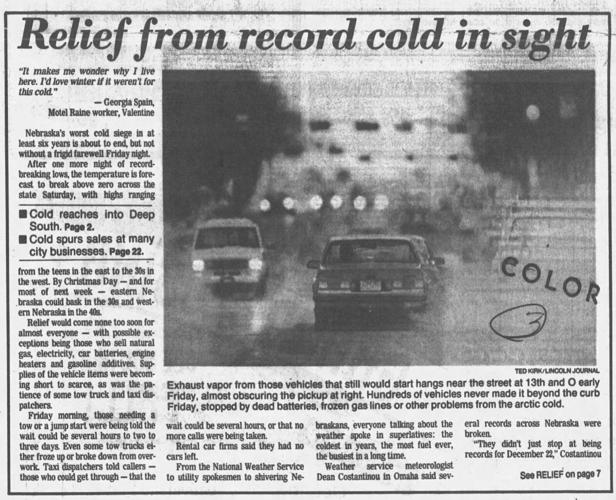 This clip from the Lincoln Journal Star on Friday, Dec. 22, 1989, shows coverage of record-breaking cold weather. 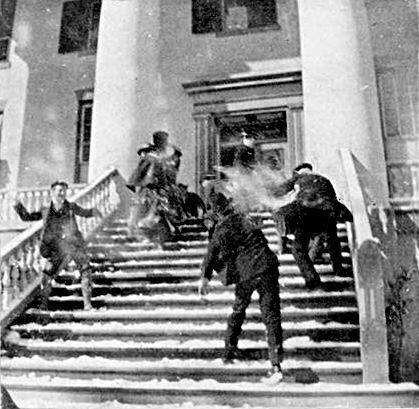 A rare snowball fight broke out on the steps of the Florida State Capitol in Tallahassee on Feb. 13, 1899. 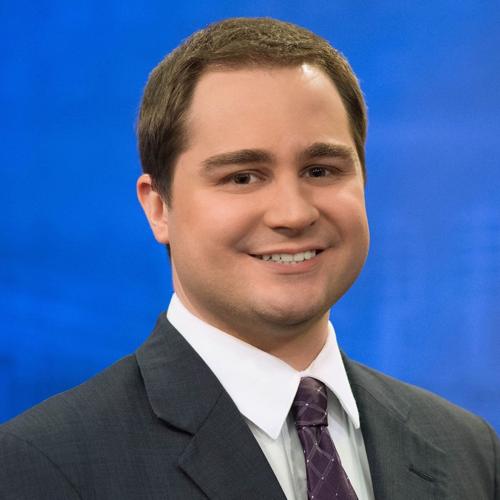