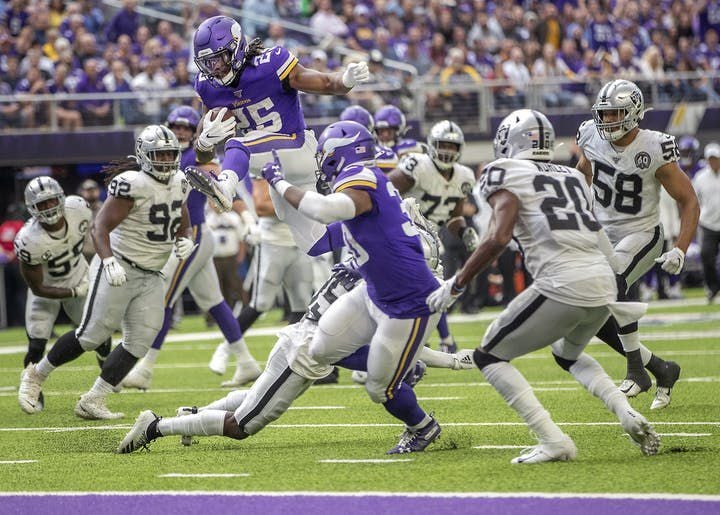 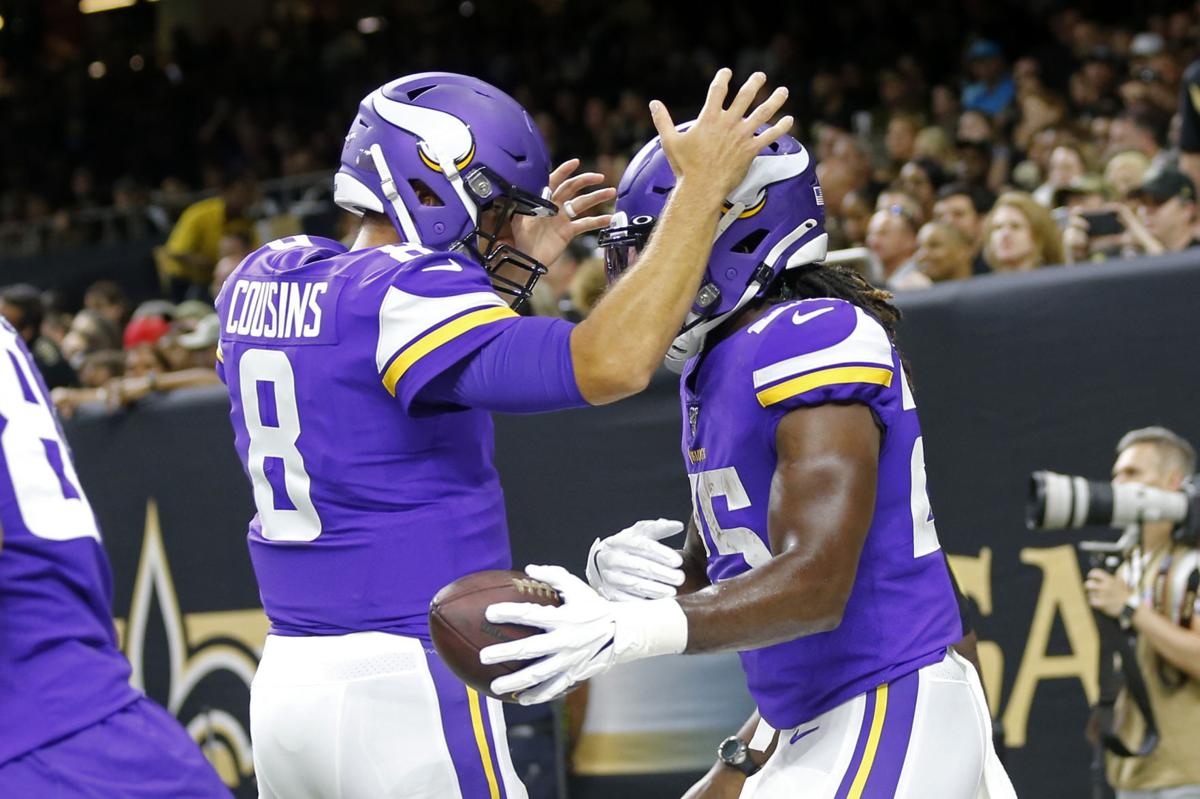 Minnesota Vikings quarterback Kirk Cousins (8) celebrates his touchdown pass to running back Alexander Mattison (25) in the first half of a preseason game against the New Orleans Saints last season. 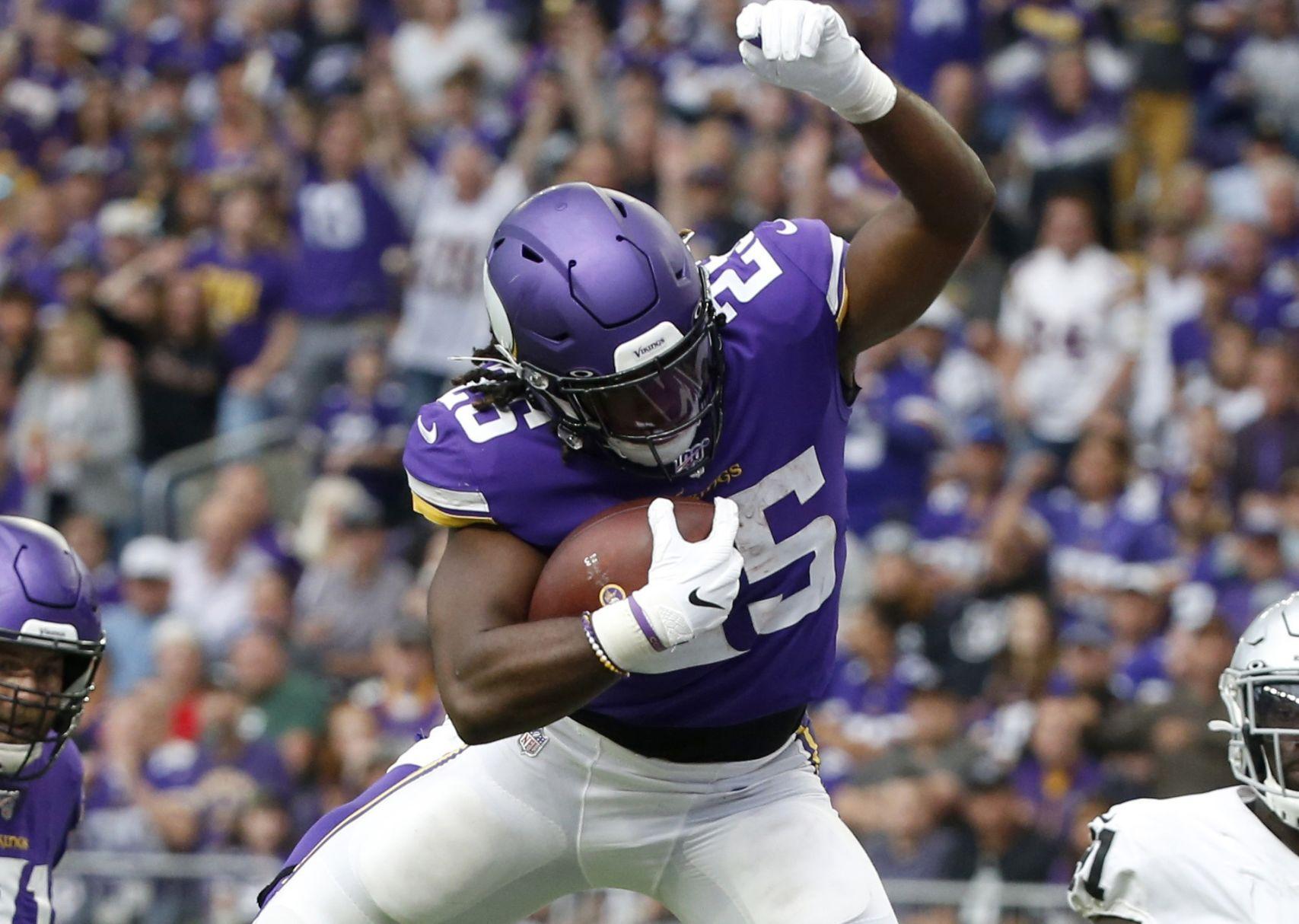 Minnesota Vikings running back Alexander Mattison (25) scores on a 10-yard touchdown run during the second half of an NFL football game against the Oakland Raiders, Sunday, Sept. 22, 2019, in Minneapolis. (AP Photo/Bruce Kluckhohn)

EAGAN, Minn. — A picture of Alexander Mattison’s first NFL touchdown hangs on a wall in his living room. The image shows him hurdling an Oakland Raiders defender as he soars toward the end zone, gliding so gracefully through air.

That snapshot has become something of a signature move for the Vikings second-year running back. Leaping over defenders while trying to avoid a tackle. He has other pictures of himself performing that trick going back to his college days, all displayed together. He calls it his “hurdle wall.”

In many ways, that move also serves as a metaphor for his life. Whenever something stood in his way, he leapt over it. Over time, Mattison built this personal hurdle wall, an invisible testament to a family’s love and devotion to each other, the power of perseverance, and one kid’s refusal to allow difficult circumstances influence his outlook or success.

Raised in a city with high poverty and violent crime rates, Mattison didn’t stumble. He flourished, both in athletics and the classroom in San Bernardino, Calif., where he graduated from a dual immersion program with a 4.57 grade-point average.

When his family struggled financially and experienced brief periods of homelessness, he kept charging forward with the help of a support system that included relatives, coaches and a community that offered its embrace.

Mattison became a nice revelation in the Vikings offense as a rookie backup to Dalvin Cook, whose unsettled contract situation could create an even larger role for Mattison at some point.

He has achieved his childhood dream of playing in the NFL, and in the process, become a role model for kids in his hometown, not by accident, but by the guiding force of discipline and hard work.

“It was a challenging upbringing,” Mattison says, “but it’s something that I cherish and take with me because it’s made me the man that I am today.”

before practiceTo fully understand that, one must begin in his birthplace, a city of 215,000 residents that filed for bankruptcy in 2012 and frequently is included in rankings of the most dangerous cities in America. His parents moved from Ohio to San Bernardino in 1997 to join other relatives there after his father left the Air Force.

Alex — as he’s called by those who know him — is 20 months younger than his twin brothers. Their parents, Darrell and Pearl, worked at group homes for at-risk kids. Money was tight. The city’s dangers were always lurking. The parents allowed nothing to interfere with education and family.

Their rules were nonnegotiable. C’s on report cards were not tolerated. No practice or games until homework was finished. Friday and Saturday were the only days they could play video games, and only two hours per kid. Sunday was for church, homework and family functions.

More than once as a youngster, Mattison showed up to football practice, dressed in full pads, and sat on the bench doing homework while his team practiced. Rules are rules.

Punishment always had purpose. A late school assignment or missed curfew triggered what was known in the house as “standards.” They might have to write “I shouldn’t talk in class because …” 25 times. Or their mom would tell them to open their Webster’s Dictionary to any page, take the first 10 words and write down the definition and parts of speech.

“Everything was always a learning situation,” Pearl says.

Alex was an easy child. Never in trouble, loved school, always respectful to everyone. People marveled at his maturity, even at a young age.

His mom enrolled him in a dual immersion program in first grade. He stayed through high school graduation. Most of his classes were in Spanish, and he’s now fluent.

“I get big reactions when people hear that I took chemistry and biology and geometry, Algebra II, trigonometry, all of that was in Spanish,” he says.

Yale contacted him early in his recruiting process. Four different academic and community service organizations awarded him scholarships as a senior, even though he received a full-ride athletic scholarship to Boise State.

The family’s “No C’s” rule was never a problem.

“You get a taste of straight A’s,” Alex says, “you start getting paranoid of B’s.”

The village principleHis dad had a particular saying whenever times got tough for the family. Your job is to be kids, he’d tell his boys.

Kids should be worry-free. Parents will figure out the hard stuff, such as how to pay bills or afford birthday presents.

Mattison’s parents shielded the kids, as best they could, from their financial struggles, which hit especially hard when a rare form of leukemia left Darrell unable to work in 2010 while he underwent aggressive chemotherapy. Pearl worked multiple jobs, but their finances stretched thin. Once, Alex told his dad that he didn’t need anything for his birthday because he didn’t want to cause more money worry. They bought him a skateboard.

Relatives and friends provided a cocoon of support. When a housing complication forced them to move in with Darrell’s sister and her family for several months, they treated it as a “slumber party,” says aunt Angela Brantley, who has two kids — a son and daughter — around the same ages as her nephews.

The kids slept on the floor in the den. They had movie nights and family dinners. The Brantleys took the boys on camping trips and taught them to fish. The grown-ups made every situation seem normal, just family spending quality time together.

The cousins became more like siblings. So close that all five got identical tattoos when each turned 18: “MB5,” for Mattison Brantley 5.

“We’re family, we’ve got each other’s back,” Brantley says. “Whoever is struggling, it doesn’t matter, we love each other.”

Pearl’s sister, Sherri Kilby, became her rock, too. When the boys were little, she would wire money to buy formula, diapers, clothes and household necessities. If Pearl needed to vent, her sister had the right words to make her feel calm. Mattison’s youth football coach opened his home for weekend stayovers on occasion. The family barber reinforced messages that Darrell and Pearl preached to the boys.

This is how the village principle works. “The power of the collective,” Brantley describes it. No one does it alone.

“A strong family bond is something we take pride in,” Mattison says. “It’s our stronghold.”

Mattison’s first coach still remembers his scouting report on the 6-year-old: He was big, smart and clumsy. The third part worked itself out in no time.

Mike Aragon had quite the peewee backfield back then. His two running backs were Mattison and his Vikings teammate Nate Meadors, a second-year cornerback.

Mattison was soft-spoken but a brute force with the ball in his hands.

“He was a man playing with boys out there,” says Aragon, who coached Mattison until ninth grade. That year, San Bernardino High coach Jeff Imbriani watched Mattison play in a recreation game after receiving a tip from a P.E. teacher.

Mattison did just that in a backup role as a sophomore, showing enough potential that several high-profile programs in the region recruited him with the hope that he would change schools. Mattison stayed loyal to his school and became a star. His exploits on the field and dedication in the classroom are renowned in San Bernardino football circles.

Aragon is now head coach at a rival high school. His team recently marked one month of being back in school, which prompted him to do a status report on his players’ grades. He stopped before completing the roster after finding more than a dozen F’s. He fumed.

Look at Alex, he told his team. He wasn’t the best athlete San Bernardino has ever produced, but he might be the smartest, and now he’s an NFL player, and you won’t follow in his footsteps with those grades.

That got everyone’s attention.

“He’s got this whole city proud of him,” Aragon says.

Mattison carried the ball 100 times as a rookie backup to Dalvin Cook, rushing for 462 yards and one touchdown. Four of his carries covered 20-plus yards, another promising marker.

Mattison says he feels more comfortable with the offense now, but he’s also made a point to push himself by diving deep into the intricacies of defenses.

“I’ve been challenging myself,” he says.

His support system is in a good place, too. His father, who has been in remission for nearly 10 years, used an educational program for veterans to return to school. He earned a degree in business administration from California State, San Bernardino at age 43.

Darrell and Pearl divorced last year. Darrell moved to Texas and found a job as an account manager. Pearl moved to the Twin Cities to live with her son and help his transition as a pro athlete.

“It’s awesome,” Mattison says. “She does what moms do. She looks out for me. I appreciate her love and her company.”

Pearl isn’t one to sit idly. She works full-time at a Walmart as a customer service manager.

Her son embodies that same spirit. This spring he donated $1,000 to each organization that awarded him a scholarship as a high school senior. He wanted to pay it forward. Mattison sat in on some of the Zoom meetings when the seniors received his gift.

“I want to be in a position where I can come back and help be the change in the city and be that hope for kids growing up,” he says.

He knows he didn’t get in position to have that impact all by himself. It took a family’s love, a village’s open arms and the courage to leap when charting a path.

Winona Senior High athletes took matters into their own hands on Friday.

Minnesota Vikings quarterback Kirk Cousins (8) celebrates his touchdown pass to running back Alexander Mattison (25) in the first half of a preseason game against the New Orleans Saints last season.

Minnesota Vikings running back Alexander Mattison (25) scores on a 10-yard touchdown run during the second half of an NFL football game against the Oakland Raiders, Sunday, Sept. 22, 2019, in Minneapolis. (AP Photo/Bruce Kluckhohn) 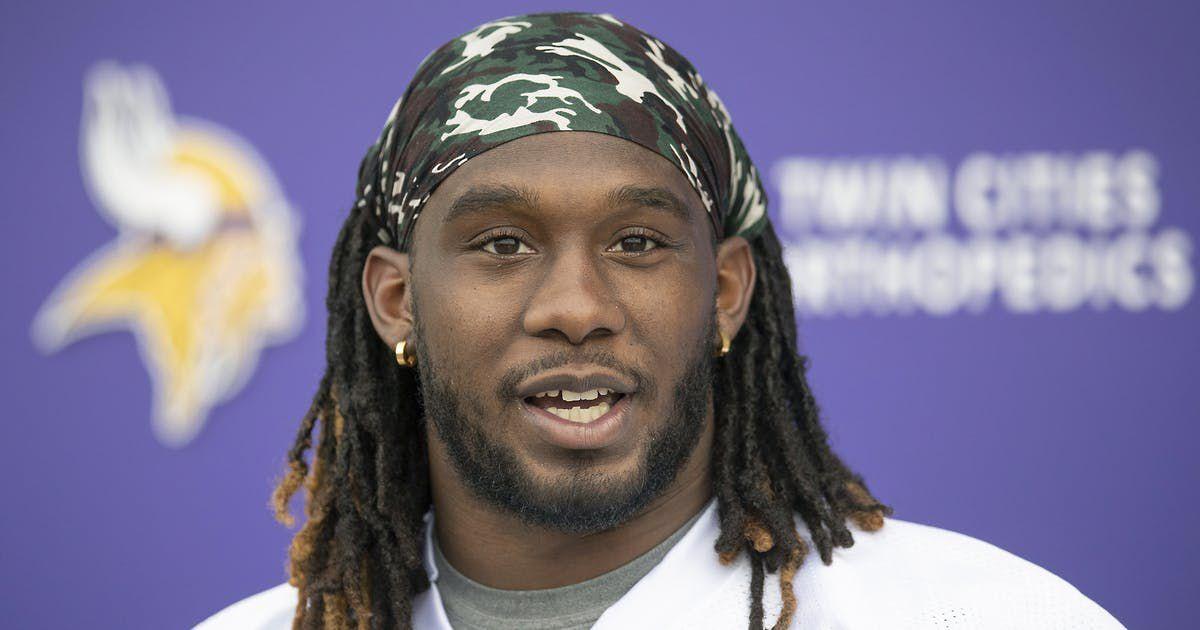