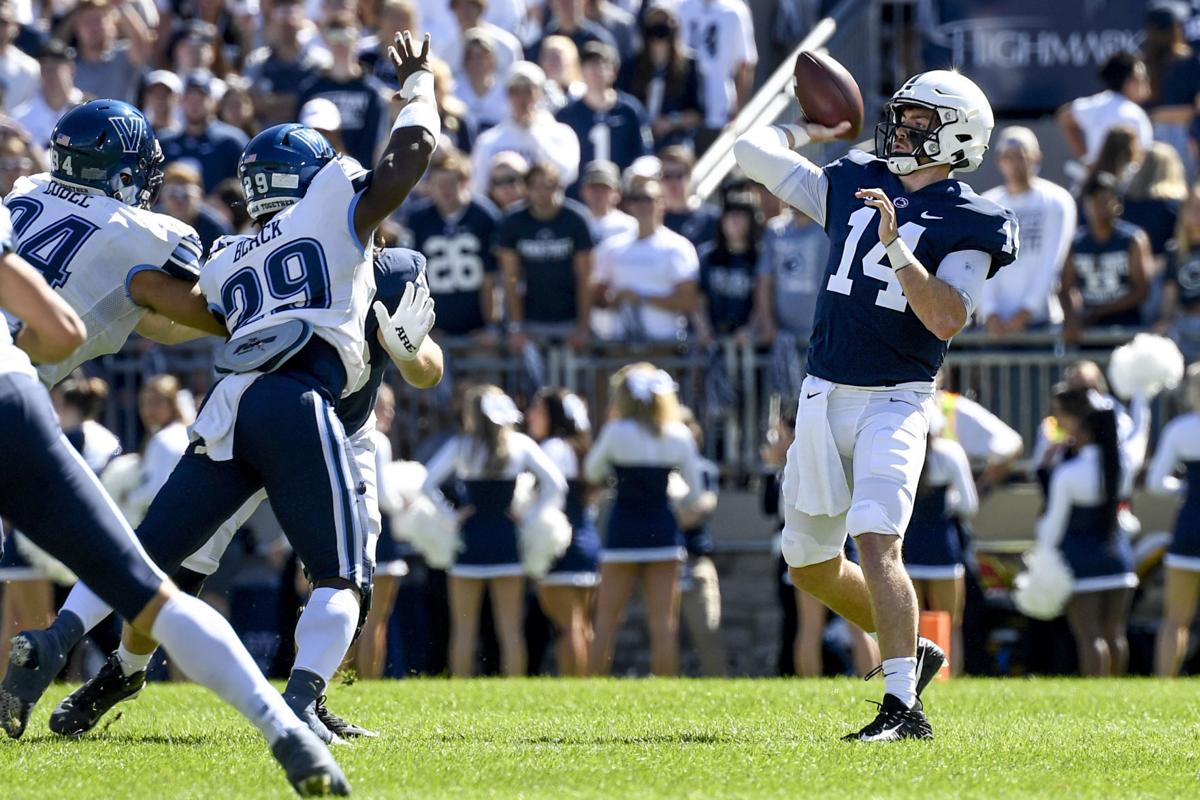 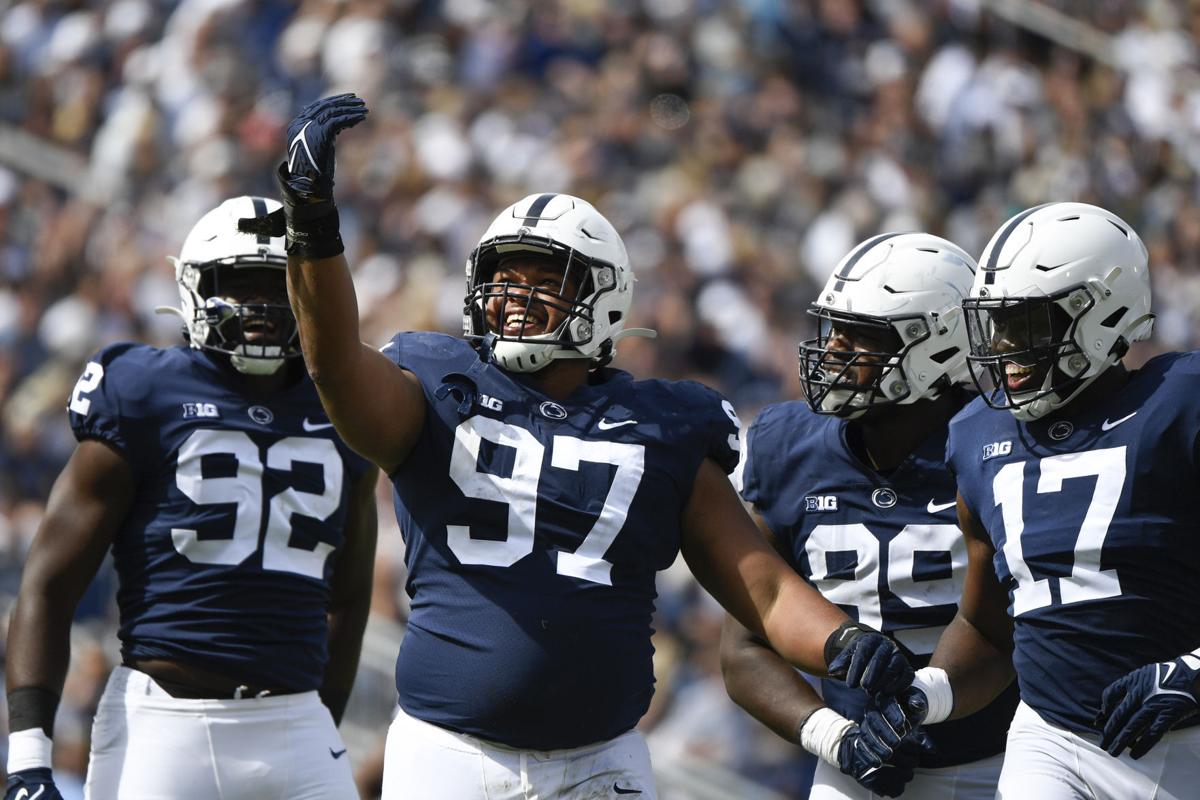 Sure, the No. 6 Nittany Lions (4-0) might have put up plenty of points and a gaggle of yards in their 38-17 win over Villanova on Saturday, but they did so without the intensity Franklin believes has fueled their eight-game winning streak.

Maybe there was a hangover effect after Penn State outlasted Southeastern Conference foe No. 23 Auburn in a back-and-forth, marquee slugfest a week ago?

Franklin saw it as early as Wednesday when practice was flat and uninspired.

“I feel like our guys a little bit were enjoying people patting them on the back,” Franklin said. “We talked about it all week long. I don’t know if we had the same edge today that we’ve had for the previous three weeks.”

But they did have a big edge talentwise against their in-state FCS opponent and Sean Clifford took advantage. He passed for four touchdowns and a career-high 401 yards on 19-for-26 passing. Clifford found Parker Washington for two TDs and Jahan Dotson and KeAndre Lambert-Smith for one apiece. Tyler Warren rushed for a touchdown and Jordan Stout kicked a field goal for the Nittany Lions, who led 17-3 at the break.

It didn’t take long for Penn State to showcase its speed advantage.

Early in the second, the Wildcats pressured Clifford and brought him down at midfield for their first of three sacks on the afternoon. But the fifth-year senior popped up and fired to Washington crossing over the middle on the next play. Washington sliced through the Villanova secondary for a 52-yard score that made it 14-3.

Stout added a 29-yard field goal before halftime, but Penn State missed an opportunity for an even bigger lead.

Cornerback Johnny Dixon dropped what could have been a Pick-6 midway through the first half, and the Nittany Lions’ final two possessions were spoiled by a holding penalty and a sack.

“Good enough to win the game,” Clifford said. “I felt like we left a lot out there.”

Clifford continued to hook up with his receivers for big plays in the second half. Lambert-Smith caught a quick pass and beat the Wildcats for an 82-yard score on the second play of the third quarter. Later in the third, Washington found a hole in coverage and Clifford found him for a 23-yard touchdown pass and 31-3 lead.

Warren added a 3-yard touchdown run off a direct snap in the fourth quarter.

No. 2 Georgia 62, Vanderbilt 0: NASHVILLE, Tenn. — JT Daniels threw for 121 yards and two touchdowns playing only the first quarter as No. 2 Georgia dominated Vanderbilt 62-0 Saturday in the Bulldogs’ biggest win in a series that started in 1893.

This game was effectively over when Georgia (4-0, 2-0 Southeastern Conference) led 35-0 after the first quarter. The Bulldogs started three of four drives in Vandy territory. They recovered a fumble on a kickoff to set up one TD, then Christopher Smith intercepted a pass to set up a second TD less than 30 seconds later.

Bulldogs’ fans turned this into their home away from Sanford Stadium with Georgia red even in seats behind the Vanderbilt bench. They got to watch the Bulldogs post their first shutout this season, forcing Vandy three-and-out nine times.

Vanderbilt (1-3, 0-1) lost its fourth straight to Georgia and its 14th straight SEC game, a skid that could be longer if COVID issues hadn’t forced Vandy to cancel its visit on Georgia’s Senior Day last season. A program that won in Athens in 2016 showed how much rebuilding first-year coach Clark Lea faces.

“We came out flat, we turned the ball over, we made mistakes especially in the special teams area,” Lea said. “And look. It doesn’t matter who you play against. You’re setting yourself up for disappointment. For me, this isn’t about them. It’s about us. It’s about how we perform.”

The Chanticleers started 4-0 for the second straight season and have won 15 of their past 16 games the past two years. They also cranked things up after a subpar offensive showing in 28-25 win at Buffalo last week.

McCall was again at the center of things. He opened the scoring with a 3-yard TD run and added scoring passes of 25 yards to Isaiah Likely and a 23 yards to Javion Heiligh. By then Coastal Carolina led 36-0 and the only drama left was whether the defense could claim its first shutout since a 51-0 win over Georgia State last season.

Coastal Carolina had little trouble igniting its offense, especially with the help from Minutemen special teams.

A high snap on a UMass punt led to a block as George Georgeopoulos tried to kick it away as he scrambled. That set up McCall’s scoring run.

His team down 20-0, Georgeopoulos couldn’t get a handle on a snap deep in his end zone that went out of bounds for a Coastal safety.

In all, the Chanticleers scored on all five of their first-half possessions for a 36-0 lead at the break. They added two touchdowns and a field goal the next three times they had the ball. The run ended on the UMass 2 when Coastal Carolina knelt down with 25 seconds left and the clock ran out.

McCall finished 10 of 14 for 162 yards, taking a seat for the second half. Heiligh caught five passes for 118 yards. It was his fifth time in the pass six games surpassing 100 yards receiving.

2 killed in small plane crash in wooded area near Waukesha

Two people were killed Tuesday when a small plane crashed in a wooded area near a suburban Milwaukee neighborhood, authorities said.

The Mississippi auditor is seeking $828,000 from former Green Bay Packers quarterback Brett Favre and an employee of his business, Favre Enterprises.

With 43 new COVID-19 cases announced in Winona Tuesday from the weekend, the county is very quickly approaching 6,000 cases.

A federal judge won't block a COVID-19 vaccine mandate for scores of Minnesota health care workers, at least for now.