Get the latest in your inbox!

We're delivering updates and highlights on the Summer Olympics daily to your inbox, including What to Watch, live coverage, schedules and medal counts.

A British skier crashes through wooden fencing on a downhill corner and slams into a pole, breaking his leg. An American hits an icy patch at the bottom of a hill and crashes into a fence, breaking one ski and twisting the other, also breaking his leg.

Another American, training before a biathlon race, slides out on an icy corner and flies off the trail into a tree, breaking ribs and a shoulder blade and punctures a lung.

These were not scenes from high speed Alpine or ski cross events. They happened on cross country ski and biathlon tracks made with artificial snow.

Many top Nordic skiers and biathletes say crashes like these are becoming more common as climate change reduces the availability of natural snow, forcing racers to compete on tracks with the manmade version. Olympic and World Cup race organizers have come to rely on snow-making equipment to create a ribbon of white through the hills since natural snowfall is less reliable.

“Artificial snow is icier, therefore faster and more dangerous,” she said. “It also hurts more if you fall outside of the course when there is no fluffy snowbank, but a rocky and muddy hard ground.”

Manmade snow has a higher moisture content, making it ice up quickly, skiers and experts say.

“It can be really rock hard out there and falling can feel like falling on concrete, and so it does make it a little bit more dangerous than if it was natural snow conditions,” said Chris Grover, head cross country coach for the U.S. Ski Team.

Some venues even make snow and then store it under wood chips through the summer and spread it around a track when it gets cold. Artificial snow, welcome as it may be, does not get better with age. Race organizers should take that into consideration when designing courses, skiers and experts say.

“It’s pretty universally recognized that courses are firmer and faster than before,” said Gus Schumacher, a member of the U.S. cross country team. While racing in France, “there were a couple crashes where people slipped out on the icy corners because that snow is super unforgiving. Like, it’s really sharp crystals that don’t bind together that well.”

John Aalberg, a former Olympic cross country skier who designs Olympic Nordic ski courses, including for the Beijing Games, said they always consider icy conditions when designing a course. He said a bigger safety issue was the change in race formats from individual starts to mass start races.

“When you ski one-by-one like they used to do in the '90s, you could have gnarlier downhills and corners because they came one at a time,” he said. “What’s important in terms of safety is that downhill corners aren’t too tight in terms of width.”

Unlike Alpine equipment, cross county skis don’t have metal edges. They’re designed to be thin and lightweight for climbing hills and gliding over flats. The boots are flexible and connect to the ski with a single metal bar under the toe. Nordic skiers don’t use the edge of the ski to navigate around a corner. Instead, they take fast baby steps to get around the curve.

All of that is more difficult on manmade snow.

“We go very fast on the downhills,” said Olympic gold medalist and U.S. Nordic ski team member Jessie Diggins. “I’ve gotten up to 76 kilometers per hour (47 mph) on the downhills on manmade snow and it is scary because most of our race trails are built for natural snow, which is a little softer. You have a little more padding on the side of the trail where you have snowbanks, not just drop-offs.”

The International Ski Federation, which oversees ski racing around the world, keeps track of injuries going back to 2006. The FIS Surveillance System was created to “monitor injury patterns and trends in the different FIS disciplines” and to “provide background data for in-depth studies of the causes of injuries.”

The reports track Alpine skiing, freestyle skiing, snowboarding and ski jumping. But there’s no data for injures in the Nordic events, which include cross country skiing, biathlon and Nordic combined.

When The Associated Press asked if the organization kept track of crashes in cross country ski and biathlon races, a FIS spokesman said: “We do track injuries during our races, but we do not make our researches public at the moment.”

When asked about the concerns about manmade snow, FIS did not respond. Martti Jylha, a Finnish cross country skier and co-chair of the Athletes' Commission on the FIS Council, did not return messages.

There are other factors in play.

John Morton, a two-time Olympic biathlete, a certified FIS course inspector and founder of Morton Trails, a Vermont company that designs ski trails, said there are international standards for Nordic ski races. He recalled attending a conference where they discussed banking turns on fast downhills, but there was resistance from some European officials who said it would make it too easy.

“There's this constant drive to make it more exciting and more dramatic,” he said. “It's very clear they want challenging courses, they want to push the athletes to the limits.”

In that context, he said, considerations must be made.

“We have to recognize that the way they were designed and groomed and built for natural snow may have to be modified now because everything is faster - the skis are faster, the wax is faster,” he said.

Manmade snow “isn't really snow at all,” said Jim Steenburgh, professor of atmospheric sciences at the University of Utah. “What it is is water that’s blown through nozzles that break up the water into extremely small and tiny droplets that then freeze. While the structure of natural snow is fundamentally different."

Manmade snow has a higher water content so it has a high-density and tends to be really durable, making it good for ski racing, at least for Alpine ski racing, he said.

British skier Andrew Young was on the fourth lap of a 15-kilometer mass start cross country ski race in Sweden in January when he crashed on the downhill and went through a fence, breaking his leg. He was rushed to the hospital and struggled through six weeks of recovery time, which ended his hopes for the 2021 World Championships.

Young said climate change has “definitely changed” cross country skiing, but it’s not the only reason the sport is more dangerous.

Racecourses are shorter partly due to limited snow, but also to bring the skiers through the arena more often for the spectators and television cameras. As Young put it: “Shorter loops mean more corners, which means more crashes.”

Soldier Hollow Nordic Center in Utah had about 17 kilometers (10.5 miles) of trails for racing during the 2002 Winter Olympics, according to Luke Bodensteiner, the center’s general manager. But the shorter loops used for racing these days means they only need 11 or 12 kilometers (6.8 or 7.4 miles) for the 2030 or 2034 Winter Games.

They like to keep the tracks about 1 meter (3.2 feet) deep to ensure the tracks hold up, he said. But that means a longer fall when a skier leaves the course.

“The problem I see is when there is absolutely no natural snow and just a ribbon of artificial snow for a race course,” Young said. “If something is then to happen and someone crashes, the consequences of exiting the track become actually quite serious.”

EXPLAINER: Why does Beijing have the Olympics again?

WHAT CITIES OR AREAS WITHDREW FROM THE 2022 BID RACE?

WHAT WAS THE FALLOUT?

Get the latest in your inbox!

We're delivering updates and highlights on the Summer Olympics daily to your inbox, including What to Watch, live coverage, schedules and medal counts.

US women's hockey once again led by a shining Knight

Cammi Granato had never forgotten the young girl she lent her stick and gloves to during one of the former U.S. Olympian’s first hockey camps in Chicago in the late 1990s.

The new guy: Marco Odermatt is the Next Big Thing in skiing

The disappointment of the NHL not participating in the 2022 Winter Olympics quickly turned to excitement for a handful of U.S. players at the world junior championship.

U.S. figure skaters who win national championships get their names inscribed on a plaque and trophy. It's something they relish.

Pressure on Dutch to continue winning ways at Olympic oval

Thomas Krol believed he was going to the Olympics four years ago. The speedskater finished third at the Dutch trials, and then politics intervened.

David Quinn walked into Boston University coach Jack Parker's office in the summer of 1987 and got news that destroyed his Olympic dream.

Column: 'Games must go on' spiel grows weaker by the day

The Olympic Charter runs 112 pages and reads like something Gwyneth Paltrow would have written if she were in charge of the Games instead of Goop. 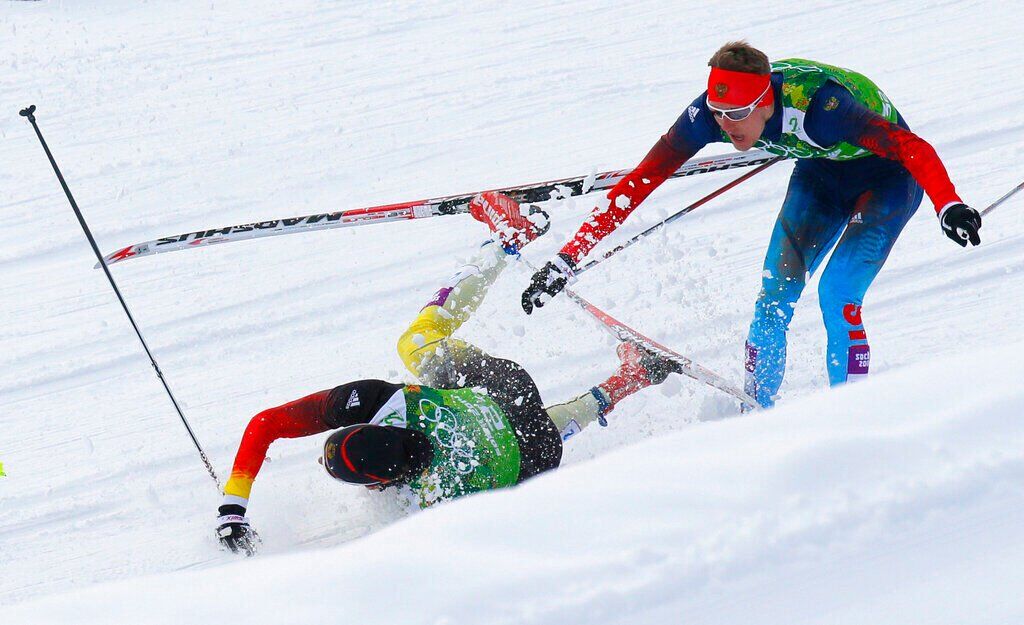 FILE - Germany's Tim Tscharnke falls in front of Russia's Nikita Kriukov, right, after making contact with the skis of Finland's Sami Jauhojaervi in the men's classical-style final of the cross-country team sprint competitions at the 2014 Winter Olympics, Feb. 19, 2014, in Krasnaya Polyana, Russia. Olympic and World Cup race organizers are already used to needing snow-making equipment to create a ribbon of white through the forests as natural snowfall becomes less reliable. Skiers and experts say manmade snow has a higher moisture content, making it ice up quickly.(AP Photo/Dmitry Lovetsky, File) 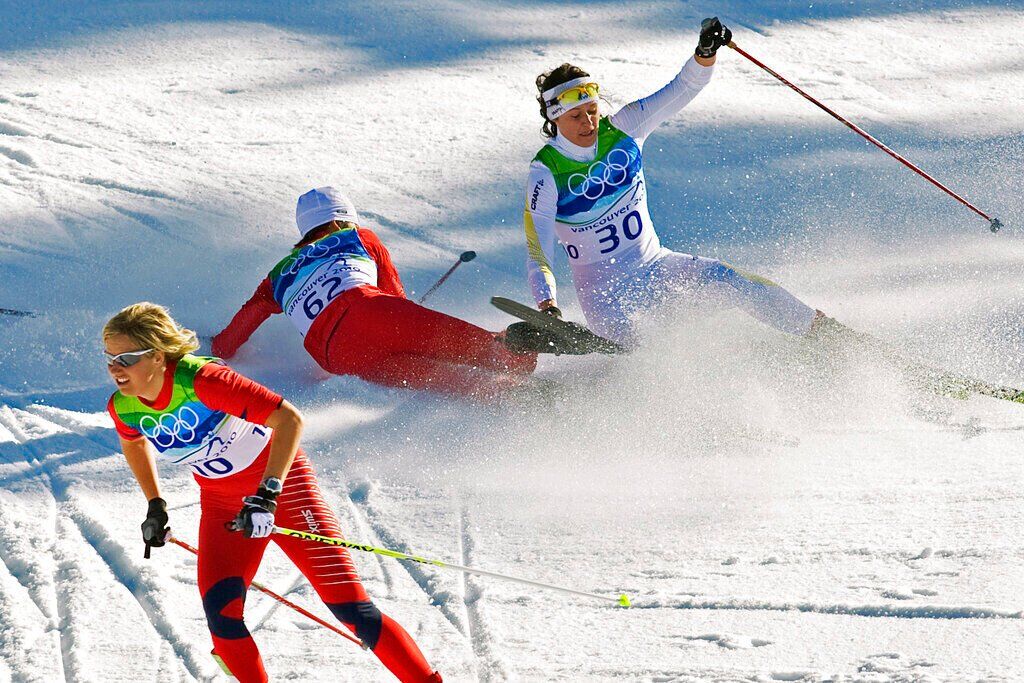