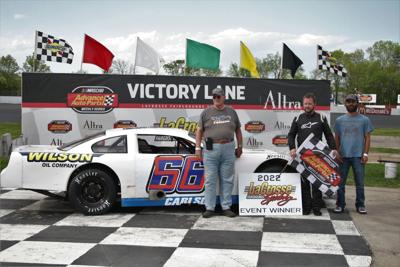 After the suspension of his No. 50 car broke in practice earlier in the day, Mike took the reins of the newly made No. 66 meant for track veteran Steve Carlson that Mike helped build and wrap.

Mike, with a makeshift No. 50 on the right side in orange tape, drove the car to a win in his heat race and then led every lap of the 25-lap Late Model Series feature.

“The past few months we’ve been working on the 66 for him to race this year and we basically go it done Friday night,” Mike Carlson of West Salem said. “(Steve) isn’t really in it for points, per say. We’re trying to work some of the bugs out of it and let me run it because he wants to see me go for points.”

Mike expects to be back in his No. 50 late model next week, but said he’s plenty proud of the early success of the new car in his family’s stable.

“I’m happy about the competition,” Mike Carlson said in victory lane. “Whether I win or dad wins, I’m happy to have made this a better car either way. I’ll get mine fixed, it’s probably only a day or two worth of fixing. I’m just thankful I don’t have to work on this one.”

Former national champion Jacob Goede of Carver, Minnesota finished second in the No. 72 car. Brent Kirchner of La Crosse finished third in the No. 8K.

Qualifying saw a new track record from Adam Bendzick of Prior Lake, Minnesota. Bendzick’s qualifying lap of 19.463 seconds was the fastest of the day and broke the previous track record set by Ty Majeski in 2016.

Bendzick will return to La Crosse next week, but his schedule is up in the air after that with his home track of Elko Speedway starting their season on May 28.

“I’m still trying to wrap my head around (that lap),” Bendzick said. “We’re running the season week to week. We’re undecided but everyone here has been great from the announcers to the officials and track staff. It’s been great to come here where they appreciate you.”

Bendzick finished sixth in the No. 21B car.

It wasn’t just on the 5/8th mile oval that saw record-breaking speeds. The re-paved 1/4th mile oval saw new records in the Hobby Stock series. Charles Vian Jr. recorded a time of 15.399 in group qualifying and finished fourth in the 15-lap feature despite a spin.

Martin Luethe was the fastest among six drivers who broke the previous Hornet series lap record in qualifying with a time of 15.780. Like Vian, he’d finish fourth in the feature.

Jimmy Bjorken won the 15-lap Hornets feature, driving his No. 28 car past Joseph Johnson with three laps to go.

Matt Moore won the 15-lap Street Stock feature in the No. 90 car.

Fort beat Niles in qualifying by a thousandth of a second with a lap of 22.009.

La Crosse Fairgrounds Speedway will be back in action at 7 p.m. Saturday with twin features in both the Late Model and Sportsmen series. Racing from Hornets and Mini Vans are also scheduled.

James Krause can be reached at James.KrauseJr@lee.net or on Twitter @jkrausepro.