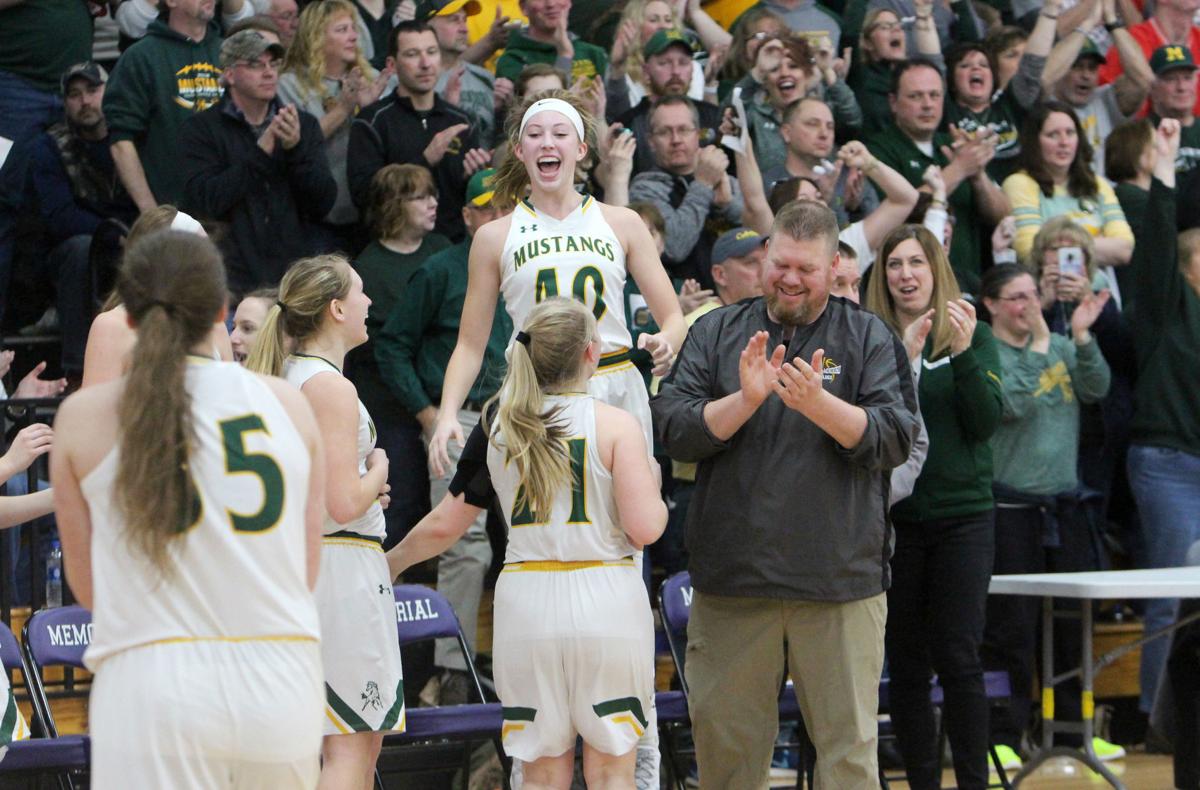 Melrose-Mindoro celebrates its 61-32 win over Colfax in a WIAA Division 4 sectional championship game on Saturday. 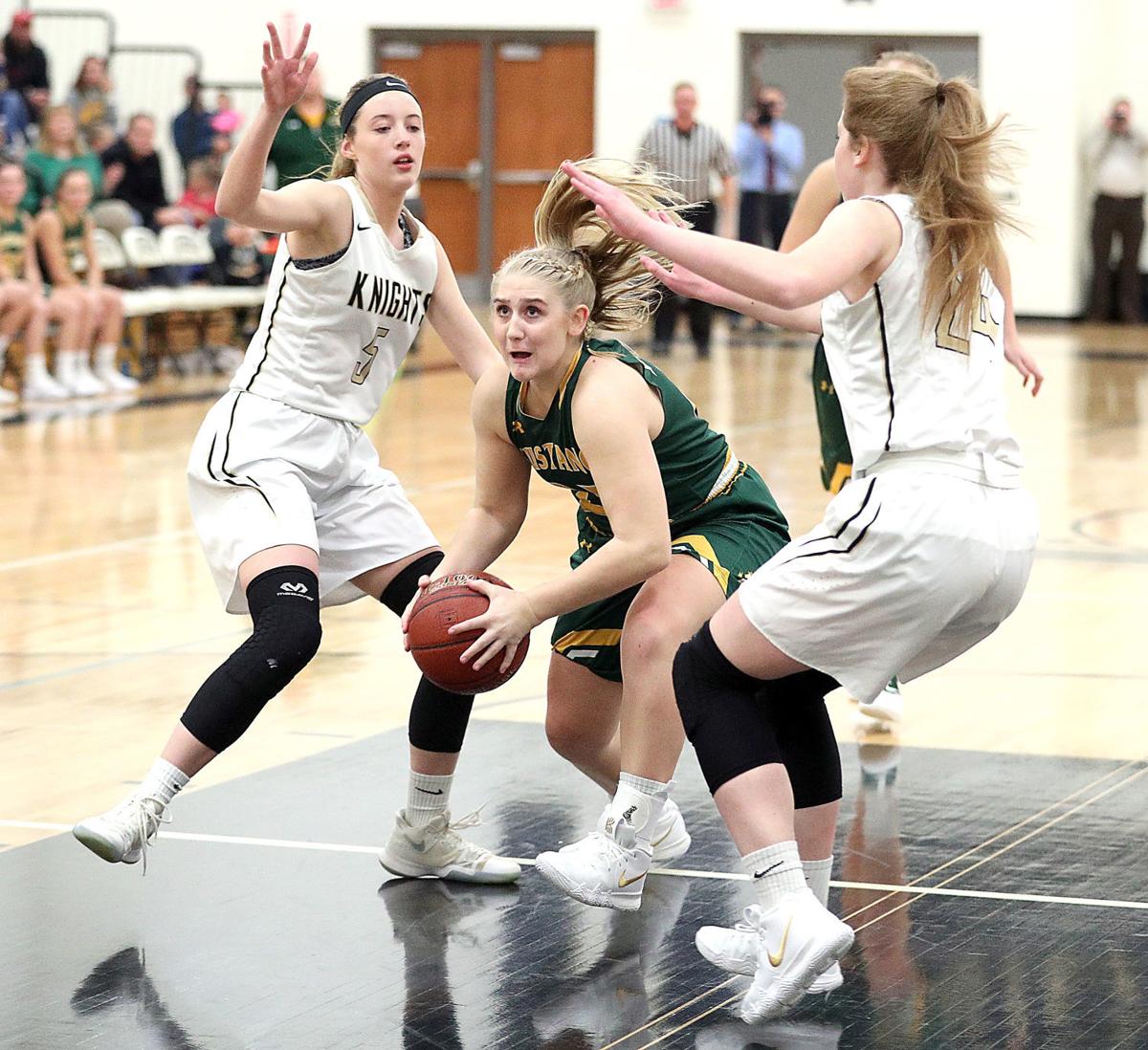 Melrose-Mindoro's Katie Christopherson drives between a couple of Onalaska Luther defenders during a regular-season game this season.

Melrose-Mindoro celebrates its 61-32 win over Colfax in a WIAA Division 4 sectional championship game on Saturday.

Melrose-Mindoro's Katie Christopherson drives between a couple of Onalaska Luther defenders during a regular-season game this season.

MELROSE — As she took the corner, Mesa Byom’s car found a bit of ice.

The Melrose-Mindoro High School junior used her steering wheel to correct for the slippery road before the tires found more ice.

“It happened really fast, but I remember everything about it,” Byom said on Monday. “There must have been shade blocking the ice. When I hit the second patch of ice, I rolled the car.”

Byom was fortunate and escaped serious injury while trying to drive to school that morning. She banged her knee on the dashboard and was held out of two basketball games as the Mustangs began to build a new chapter to a book that already included a Division 4 runner-up finish in the WIAA state tournament.

Melrose-Mindoro had a game at Gale-Ettrick-Trempealeau that night, and it was a legitimate battle of the titans with both teams having aspirations of playing at the Resch Center in Green Bay this weekend.

The Mustangs, without Byom, beat the Red Hawks 50-45 to conquer a bit of adversity that never really surfaced when they put together the most successful season in program history last winter.

Fortunately, they have had minimum impact as third-ranked and second-seeded Melrose-Mindoro (25-1) prepares to play third-seeded and second-ranked Colby (25-0) in a state semifinal that will begin at approximately 8:15 p.m. Thursday.

The Mustangs that show up to the Resch Center this time are more experienced, more sure of themselves and readier than they have ever been to add to program history already created.

They have won 76 of their last 79 games with the same starting five — Byom, fellow juniors Emily Herzberg and Calette Lockington and seniors Katie Christopherson and Erika Simmons — and haven’t lost twice in a season since 2015-2016.

But two outcomes this season may tell the most about this year’s version of the Mustangs, and what happened the day of Byom’s injury played a role in how this season has played out.

Beating the Red Hawks, even though it was the second game of the season, would have been significant with Byom and became even bigger without her.

Byom, one of two Division I South Dakota State recruits on the team — Herzberg is the other — only missed a couple of games after her accident and has been a consistent double-double threat all season with averages of 13.6 points and 8.9 rebounds, but none of that production was available against the Red Hawks.

“That’s a game we always look forward to every year anyway,” Simmons said. “G-E-T always pushes us, and that sets a good tone for the season.

“Missing Mesa in that game was big, but it was the first chance to see how much our bench could help us this year. It was go time for our bench right away, and I think that set the tone for us having a stronger bench this year.”

Simmons, who averages 12.4 points and 8.3 rebounds, avoided a scare when she turned her left ankle on a drive to the basket during an 80-30 win over Alma/Pepin. The initial fear was that it was broken, but a visit to a doctor the next day revealed only a sprain. It slowed the UW-Whitewater recruit down but didn’t keep her off the court.

Christopherson, a UW-Stout recruit, tweaked a shoulder injury against Colfax on Saturday, but she still managed to score nine points in the 61-32 victory. Christopherson, who averages 11.8 points and shoots 35.1 percent (26-for-74) from the 3-point line, was shooting fine during Monday’s practice.

She expects the team’s second state experience to be one of focus after seeing what it was all like a year ago.

“I think nerves set in a lot last year because it was the first time we went through it,” Christopherson said. “I remember how nervous we were watching the game before us, but we were OK a couple minutes after our (semifinal) game started.”

But even the balance that exists — Herzberg and Lockington add 11.8 and 9.6 ppg, respectively — couldn’t keep the Mustangs unbeaten for a third consecutive regular season.

That leads to the second game of the discussion.

Melrose-Mindoro traveled to Wisconsin Dells, Wis., in January to play Black Hawk, which placed second to Bangor in last year’s Division 5 state tournament. The Mustangs were beaten by a surprising score of 60-42.

“For two days, there was no way that you could convince me it was a good thing that we lost that game,” Arneson said. “But now I feel like we got a lot out of it. It showed us things we have to do better even though these players have played a lot of basketball together.”

Simmons said playing Black Hawk, which is undefeated and in the Division 5 state tournament again this season, was important.

“I think we learned that we weren’t as invincible as we thought,” she said. “We were used to coming out victorious, and I think we needed that game to get where we are now.”

Todd Sommerfeldt can be reached at todd.sommerfeldt@lee.net or via Twitter @SommerfeldtLAX.

VIDEO: Go to lacrossetribune.com to see coach Joey Arenson and players talk about the season

A collection of the Tribune's preview coverage of the WIAA state girls basketball tournament.