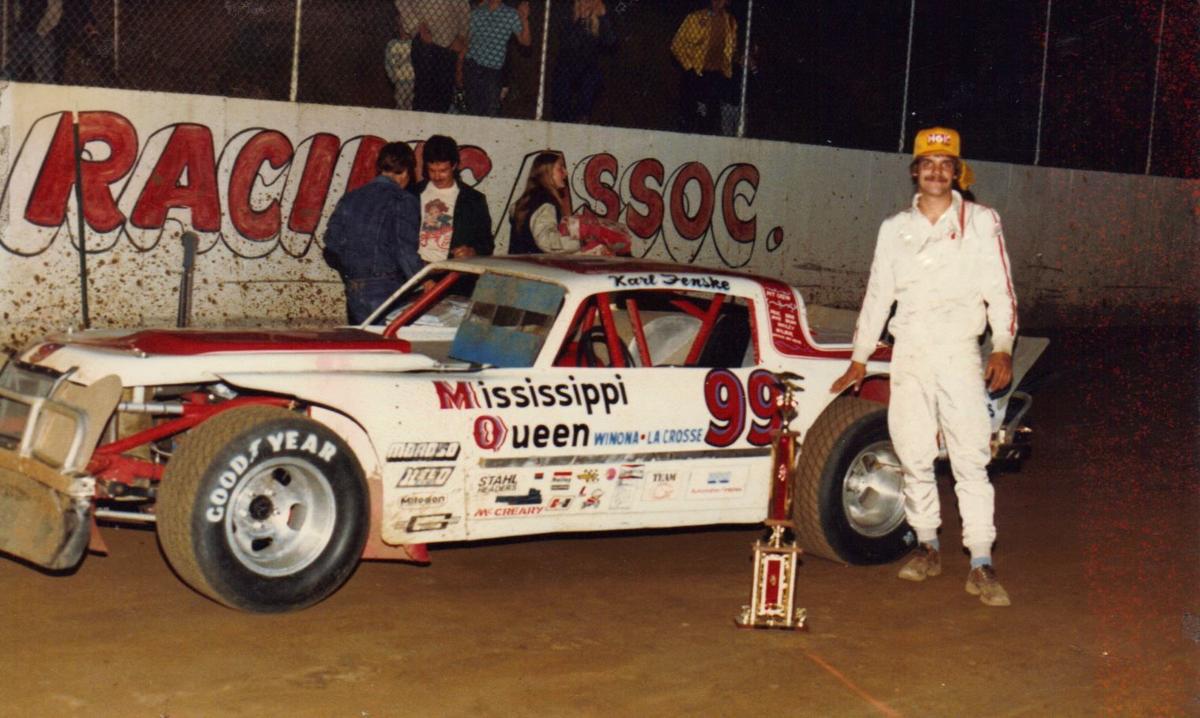 Karl Fenske stands in front of his car 'The Mississippi Queen' after winning the NGK Spark Plug Late Model Invitational in 1980 at the Rice Lake Speedway in Rice Lake, Wis. 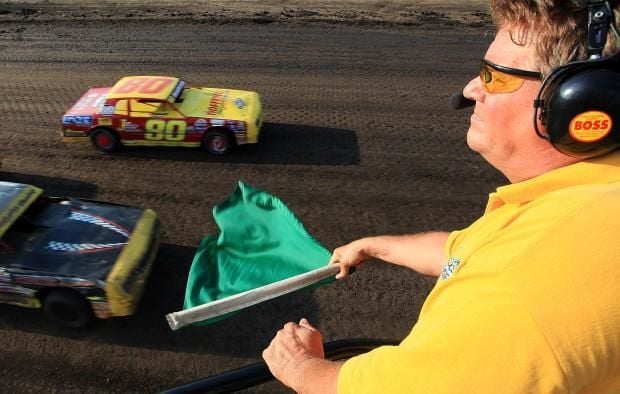 Get breakfast at the Hy-Vee, where he would always wait until the last minute to order his food so he could talk to everyone. After, he walked around town, popping in to see how his fellow gear heads were doing and how they did at the Mississippi Thunder Speedway the night before.

“Every Saturday morning, he came over to ask how we did on Friday night,” four-time MTS Modified season points champion Josh Angst said. “If I didn’t win, he was never happy. What do you have to do to get better? If you got second, he would go ‘Well, why did you get second?’”

Fenske unexpectedly passed away July 3, 2019, at the age of 63 after complications to a surgery removing a cancerous growth on his neck. His death left behind a large void in the racing community.

For decades, his No. 99 car was a mainstay in tracks across southeastern Minnesota and southwestern Wisconsin, and his impact on the sport was second to none. The effect he had will be on full display Friday when the Mississippi Thunder Speedway honors him with the inaugural Karl Fenske Memorial Race. Gates open at 5:30 p.m.

“We wanted to do something to be able to honor his memory and what he did for the sport in our area,” speedway owner Bob Timm said.

Fenske was the ultimate competitor.

In fact, according to longtime friend and former pit crew member Dave Thill, instead of settling for second, he’d sometimes wreck the car on the last lap.

“Second place was never the answer,” Thill said. “He would do anything for a win.”

Timm knows that from experience.

“We had lots of heated moments on the track,” Timm said with a laugh. “I can remember one time, I think we were at Deer Creek Speedway. We ended up running into each other so much during the race, a yellow came out. I ran into him, and then he ran into me and we were just destroying our own equipment. It got to the point where I was like, ‘Man, I’m not going to have anything left after tonight.’

“I remember driving up on the infield just to get behind an official just to make sure he would quit running into me. I don’t think that was the first time that ever happened either.”

For that, it seemed people either loved or hated him. But always the ultimate showman, people always came to see him race.

“When I was five-years-old, my dad would race street stocks (in Fountain City), and I remember watching Karl and I knew back then there was two types of people, those that loved him and those that hated him,” Timm said. “And it didn’t matter whether you were a fan or not, you still came to watch because he was there. Love him or hate him, he brought people to the racetrack and raised awareness and made fans of the sport.”

Fenske was known to lose his temper at times, and it sometimes landed him in trouble — like when he flipped off the grandstands at Kasson, including the Budweiser sponsor that was there.

“He was a hothead no doubt about that,” Thill said with a laugh.

But for those that knew him off the track, Fenske was a special person.

Few could match his work ethic, as he worked tirelessly at the family’s auto body shop — Fenske’s Auto Sales and Auto Body Shop — always ensuring he had his car’s body looking brand new. Few could also match his infectious smile or his compassion for others, something that many didn’t get to see.

“He wasn’t the guy I thought he was at all while we were racing each other,” Timm said. “He had a lot of compassion for people, animals and what was going on in the community and all things you would think he would have nothing to do with.

“He was just an overall good guy.”

If you needed something, he would provide it.

“When I made the move from go karts to stock cars, he was always there to help us,” said Eric Thill, Dave Thill’s son. “We didn’t have a trailer to go pick up our car or for the first few races, so we used Karl’s truck and trailer. I didn’t have a set of scales to help set up the car, so I would go and borrow Karl’s almost every weekend. I think a lot of people maybe didn’t see that side, but he was always willing to help young and upcoming racers like myself and many others.

“But even after his racing career, he’s well known in the community just for his smile and laugh and his ability to be very friendly with people.”

The impact he had on racing is evident in just the amount of money people have donated for Friday’s race. Originally the payout for the winner of the USRA Modifieds feature on Friday was scheduled to win $1,999. Now, after donations, the winner of the Modifieds feature will win $5,099, with second through ninth place also seeing a significant bump in prize money. The top racers from around the country, including Rodney Sanders from Texas, are expected to deliver a top notch racing experience.

“It’s been exciting to see the amount of people that clearly either really had a lot of respect for Karl or really liked Karl,” track promoter Tyrone Lingenfelter said. “It’s going to be a great turnout.”

“I would expect a lot of cars with that pay,” said Angst, who has been working with Fenske’s family on a special surprise for Friday’s race. “We should get a lot of extra cars, and I would think the fans are going to come. I talked to a few that are coming just because it’s the Karl Fenske Memorial Races.”

Is Sean Payton an early frontrunner for Coach of the Year?

Karl Fenske stands in front of his car 'The Mississippi Queen' after winning the NGK Spark Plug Late Model Invitational in 1980 at the Rice Lake Speedway in Rice Lake, Wis.