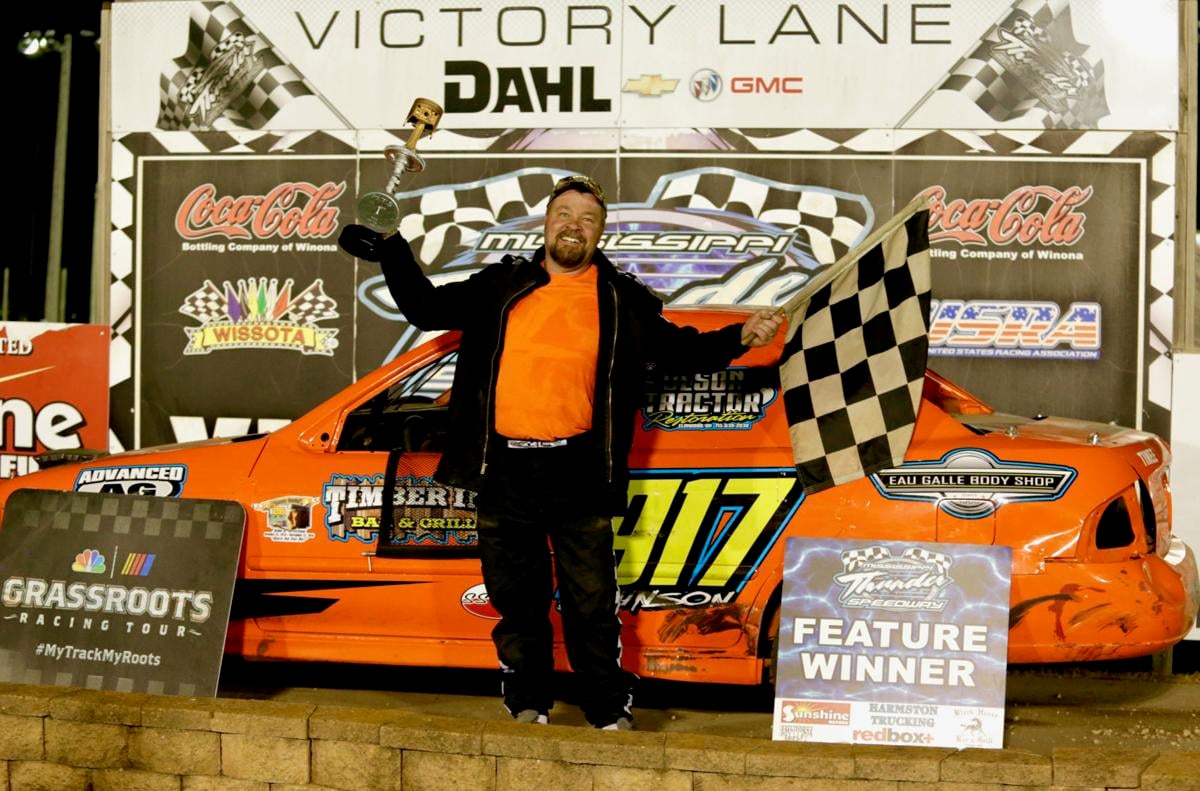 Jeremy Johnson of Elmwood, Wisconsin, enjoys his time in victory lane as he takes the checkered flag in the Hornets division during the feature race at Mississippi Thunder Speedway on Friday. 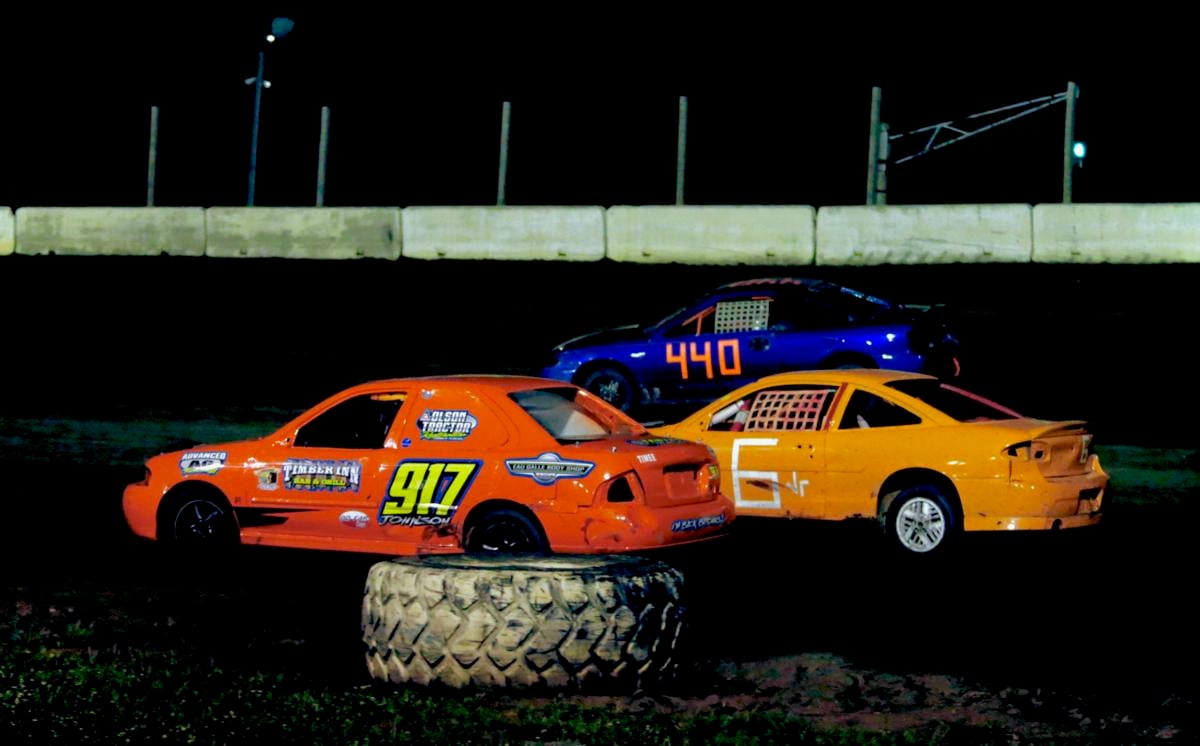 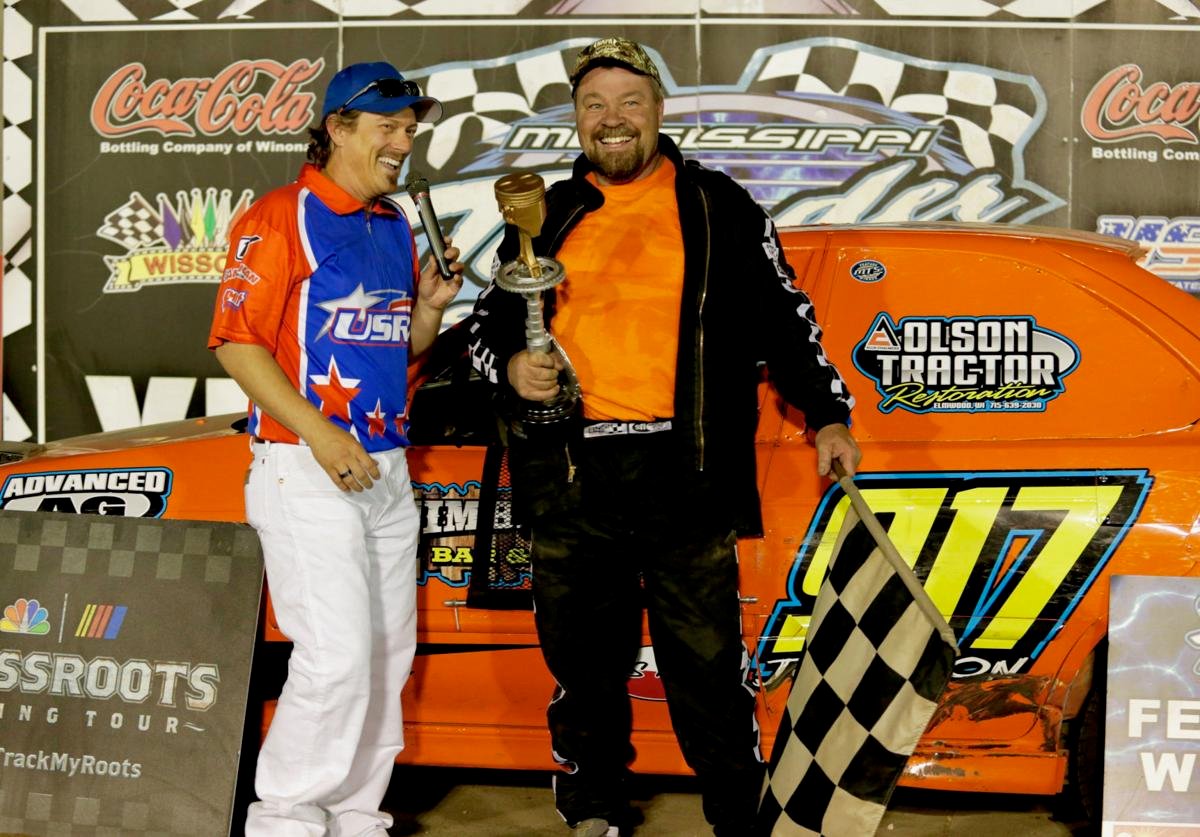 Jeremy Johnson of Elmwood, Wisconsin, enjoys a laugh with Dan Bailey in the winners circle as he takes the checkered flag in the Hornets division during the feature race at Mississippi Thunder Speedway on Friday, June 12th, 2020.

FOUNTAIN CITY, Wis. — Fresh off of a victory the week before, Jeremy Johnson thought he would try his luck again at Mississippi Thunder Speedway in the Sunshine Refuse MTS Hornets class.

But Friday night’s race was a different animal.

The Baehman Law Redneck 100 Challenge is 100 laps with zero caution flags in cars that aren’t exactly the comfiest to race in. The Hornet class features any four cylinder vehicle that has front or rear wheel drive with a maximum wheel base of 104 inches.

But once again it was Johnson that found himself in victory lane, as he was able to hold off Denny Berghahn Jr. in the final lap to take home a nice $1,000 payout in front of an estimated crowd of 500 people Friday night at Mississippi Thunder Speedway.

“I’m going to take my wife on a trip,” Johnson exclaimed in victory lane.

Johnson led for most of the race, pulling ahead of the pack around lap 32. It quickly became a two car race from there with Johnson and Berghahn separating themselves from the 18-car field. Berghahn tried his best to get around Johnson, but everytime he made his move, Johnson was there to block him off.

“I kept counting down the laps, waiting for something to go wrong,” Johnson said. “But it never did.”

Berghahn made one last effort on the final lap, giving Johnson a little bump on turn four to try and get inside position, but Johnson was able to hold on just long enough to win by a nose.

“He hit me really hard the last three laps, but I managed to hold it,” Johnson said. “He was going to have to go around the outside if he wanted it.”

Chris Hovden got the night started by winning the Jailhouse Saloon USRA Hobby Stocks class, holding off La Crosse’s Steve Dwyer in the 22-car field. The two were in control of the race early on before cautions on laps 14 and 15 made it tight again. Yet, Hovden’s confidence never wavered.

“I’m pretty confident in myself,” Hovden said. “I have been doing this for 15 years, so it comes second nature to me.”

The Black Horse Bar and Grill USRA B-Mods class got off to a bit of a rocky start with three cautions in the first five laps, including a three car pileup on lap one. But they quickly found their footing — specifically Kadden Kath — who leapt out in front early. He and Eric Thill — who won the B-Mods race the week before — were battling out before the two got caught up with one another between turns one and two on lap 12. It knocked Thill out of the race and Kath thought he was done as well.

“When he hit me, the car jumped on the right front and it dug into the ground and I thought I broke something in the left rear,” Kath said. “I mean it was a weird jump because our tires bound up. I thought I broke something and thought, ‘well there goes the race.’ This is a brand new car this year and we had been struggling with it. This is the ninth night out and glad I got a win on night nine with it.”

Kath led 23 of the 25 laps to clinch his first ever feature win at MTS.

“I had raced here quite a few times and hadn’t gotten a win yet,” Kath said. “This feels really good, especially on a night like tonight.”

Jake Timm knows the Mississippi Thunder Speedway like the back of his hand.

Track owner Bob Timm said they typically have 90 to 100 cars, but have averaged 165 the last two Fridays.

Jeremy Johnson of Elmwood, Wisconsin, enjoys his time in victory lane as he takes the checkered flag in the Hornets division during the feature race at Mississippi Thunder Speedway on Friday.

Jeremy Johnson of Elmwood, Wisconsin, enjoys a laugh with Dan Bailey in the winners circle as he takes the checkered flag in the Hornets division during the feature race at Mississippi Thunder Speedway on Friday, June 12th, 2020.