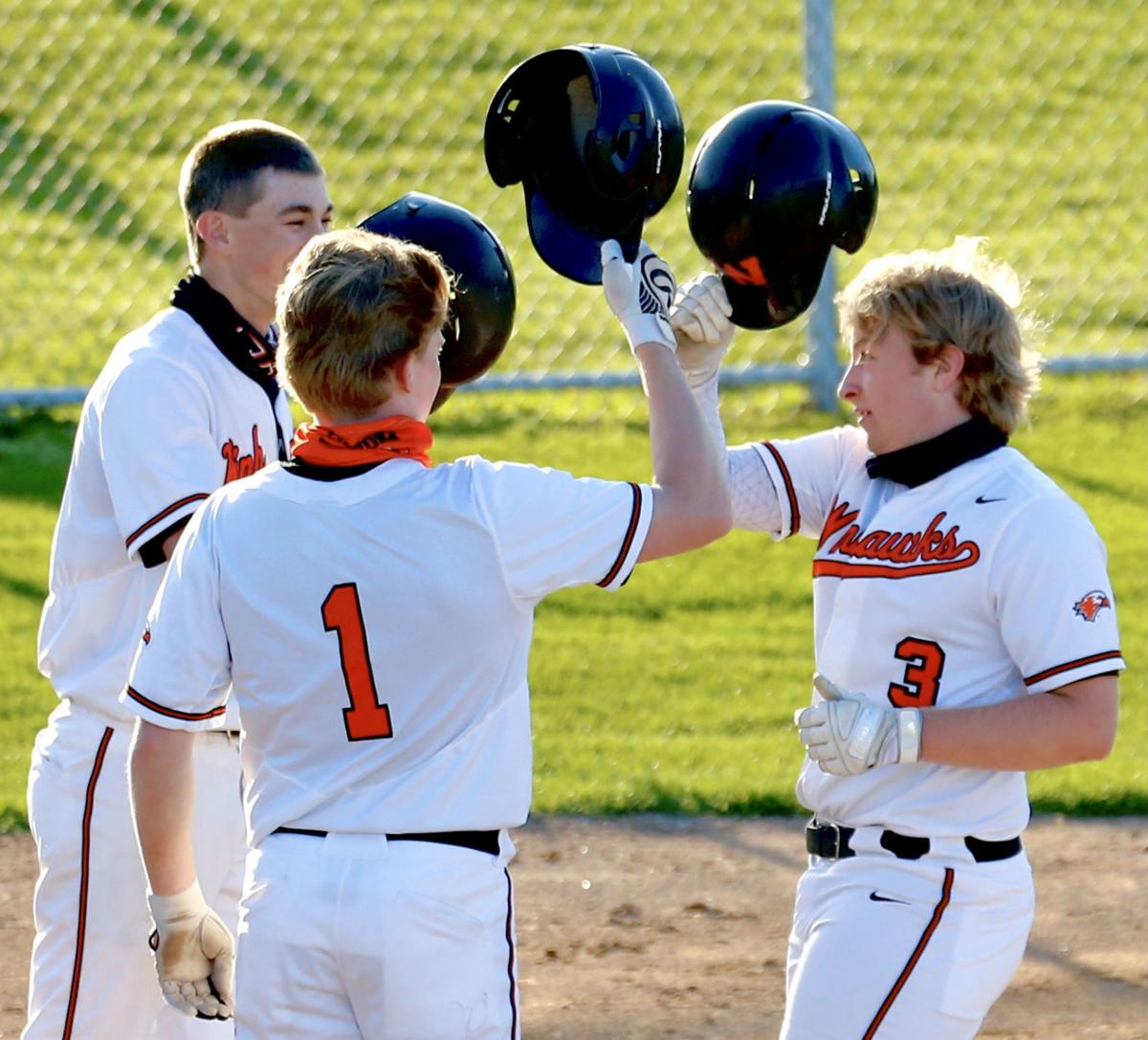 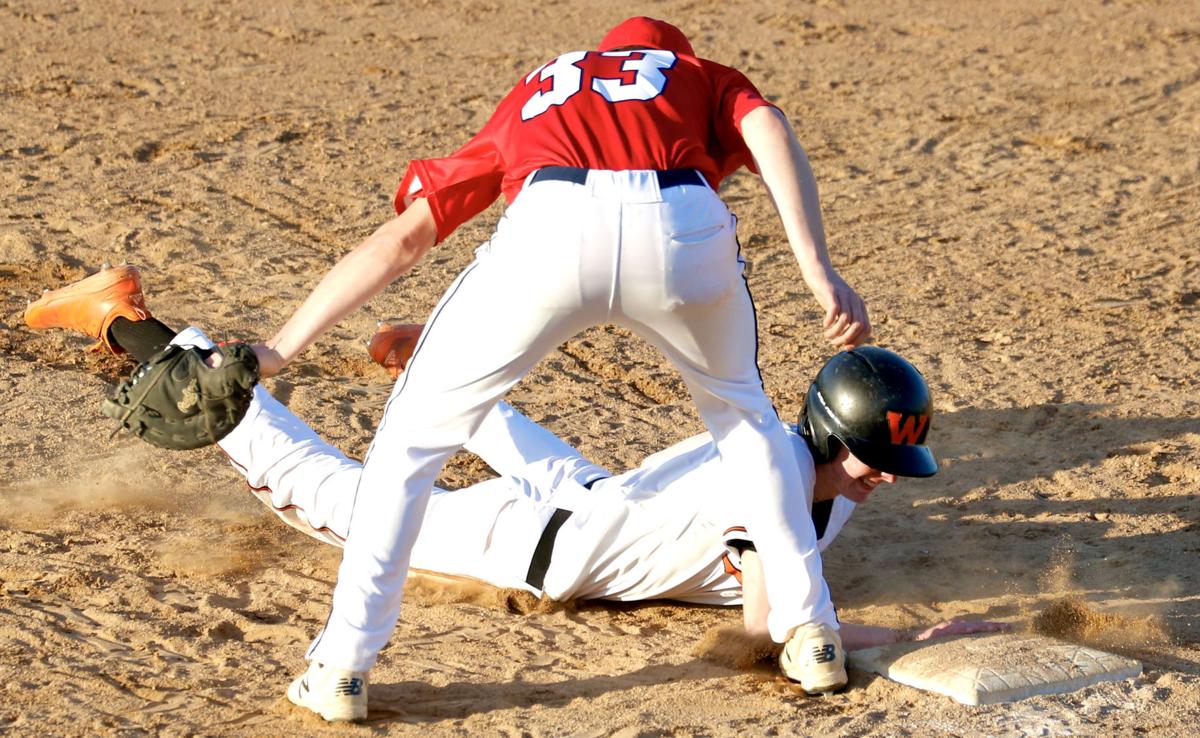 Winona Senior High's Christian Kamrowski dives back to first base as Albert Lea's Trevor Ball looks to apply a tag during baseball action on Thursday, May 6th, 2021.

RUSHFORD — The Lewiston-Altura High School softball team won its fourth and fifth consecutive games, as it swept rival Rushford-Peterson 18-0 (4) and 5-4 in a doubleheader on Thursday in Rushford.

In Game 1, the Cardinals (7-5, 3-5) drew an eye-popping 14 walks, while collecting seven hits. An 11-run fourth inning ended it. Olivia Funk tossed three hitless innings in the circle, while also going 2-for-4 with two doubles and two RBI at the plate. Morgan Jackson went 2-for-3 with a double and four RBI, while Mia McGuire went 2-for-2 with two walks and two RBI to help pace the Cardinals.

Game 2 was a closer affair, but a five-run fourth inning proved to be the difference for the Cardinals.

Funk once again came through for the Cardinals.

She had a three-run double in the fourth and earned the win in the circle by allowing four runs — one earned in — on just three hits, while striking out 13 in a complete game effort.

Tiegan Prigge went 2-for-3 with an RBI as well for the Cardinals, who were able to hold off a Trojans late rally.

R-P scored two in the seventh, but Funk was able to work out of it to secure the Cardinals seventh win their past eight games.

Aviana Anderson-Ingram went 2-for-2 with two walks and two runs scored for the Trojans (1-11, 0-8), who received two scoreless innings in relief by Isabelle Olson.

Grace Miller and Madison Hazelton each added three hits, with Hazelton picking up the win in the circle, allowing just three hits.

Game 2 was a different story as the Ramblers pulled off a rally in the fifth thanks to Allison French, who blasted a three-run homer to give Cotter a 5-4 lead.

Hazelton locked it down from there, tossing three innings of scoreless relief to pick up the save, allowing just one hit in the process. Dana Augedahl gave the Warriors a 2-0 lead with a two-run homer in the first. Mallory Elenfeldt’s two-run double tied it at 2.

ALBERT LEA — Makayla Steffes and Grace Fricke went a combined 14-for-17 with four doubles and six RBI between the two games for the Winhawks (10-2, 9-1).

Steffes also picked up the win in Game 1, striking out 13 in six innings.

Paige Grafton went 5-for-9 with a double and three RBI, while Macy McNAlly went 4-for-8 between the two games.

Ava Hamsund tallied six RBI at the plate and picked up the win in the circle in Game 2 with five shutout innings, allowing just one hit with eight strikeouts.

LA CROSSE — Lindsey Lettner was 3-for-4, and Genna O’Neill 3-for-5 with a pair of doubles for the victorious Red Hawks (1-2). O’Neill was also the winning pitcher for G-E-T after striking out nine and walking five.

Tucker Merchlewitz was solid on the mound for the Winhawks, allowing just two unearned runs on three hits with six strikeouts, but the Winona offense was silenced by Albert Lea’s Blake Ulve.

The Winhawks (6-7, 5-7) only run came in the seventh on a sacrifice fly from Merchlewitz.

In Game 2, the Winhawks took a 5-4 lead thanks to a four-run fifth inning, but Albert Lea responded with five runs in their half of the sixth.

Winona had just four hits with one of those being a three-run homer from Quinn Larsen.

VIROQUA — Senior Evan Hubatch was 3-for-3 in the first game and 2-for-3 in the second for the Blackhawks (5-1, 4-0), who ran their winning streak to four games by sweeping the Red Hawks.

Clayton Slack was 3 for 4 in the first game and the winning pitcher of the second. Kamden Oliver was 2 for 3 for Viroqua in the second game.

Lanesboro won the meet with a team score of 348.

Andrew Hoiness led LARP, finishing third with an 85 behind Fillmore Central’s Jake Fishbaugher (82) and Lanesboro’s Hayden Lawstuen (82). Anders Shurson tied for sixth with a 90 for LARP.

WABASHA — Led by Hallie McEllmury’s fourth-place finish with a 99, Lewiston-Altura/Rushford-Peterson finished third out of seven teams with a 439.

Caledonia won with a 381 with Jenna Wiebke earning medalist honors with an 81.

The Winona Winhawk baseball team loses both games of a doubleheader against the Albert Lea Tigers by scores of 2-1 and 9-5 on Thursday, May 6t…

Winona Senior High's Christian Kamrowski dives back to first base as Albert Lea's Trevor Ball looks to apply a tag during baseball action on Thursday, May 6th, 2021.