MINNEAPOLIS — Annalese Lamke went home to Galesville last summer eager to attack the to-do list from her coaches on the University of Minnesota women’s basketball team.

It only took a few weeks for Lamke’s plans to change. What she hoped would be an offseason of hard work that would help her build on 14 starts as a freshman for the Gophers instead began with her out of action.

Lamke, a 6-foot-3 center, suffered a broken right foot in late May, and a protective boot kept her from shooting, running, and footwork drills until September. She reported to pre-season workouts with a clean bill of health, but her three months off, combined with Minnesota’s depth in the post, made it difficult to push for a starting job.

“I was just playing on the court at home, then I stepped funny and broke my ankle,” Lamke said. “It’s been a recurring thing, they said I fractured my foot before and I just played through it, and it finally broke really well.”

Lamke, the 2015 Daily News Girls Player of the Year, has played in three of Minnesota’s 12 games this season and is behind centers Jessie Edwards and Karley Barnes on the depth chart. The Gophers will add 6-foot-5 Bryanna Fernstrom after she becomes eligible in the second semester following her transfer from Iowa State.

That means an uphill climb for Lamke, who hardly ever saw the bench as a four-year standout for G-E-T.

“I’m back in the flow of it now, but the lineup has kind of been set,” Lamke said. “I’ve been on the scout team, going against the starters and making sure they’re playing their best while I’m getting back my skills and confidence. Mostly it’s just trying to focus on getting better and helping the team win.”

Lamke set a strong foundation for herself last season. She played in all 25 games, and Gophers coach Marlene Stollings trusted her enough to start in 14 Big Ten games. Lamke averaged 1.5 points and 1.4 rebounds while getting a good idea of what kind of Division I player she could be and what she needed to improve on.

“My freshman year, I was just to happy to be here,” said Lamke, who was released from a commitment to Northern Illinois after its coach, Kathi Bennett, left the program in the summer of 2015. “Especially what happened at the beginning of my recruitment. I was so happy to be here and so ready to follow what the program had and do what they wanted me to do, so if they wanted me setting screens and rebounding, I was totally fine doing that.”

Plus, she got to play with senior Rachel Banham, the 2015-16 Big Ten Player of the Year and a first-round WNBA draft pick.

“That was one of the most exciting parts,” Lamke said. “Just being able to witness what Rachel did, it was crazy.

Stollings praised Lamke’s willingness to accept a backup role, and her determination to find a way to earn more playing time.

“We told her we’re not going to compare you to a more athletic post player in our conference, we’re going to compare you to people that are similar,” Stollings said. “We want you to use your body and your strength. She made a pretty strong commitment to just her conditioning and really transformed that part of her game. I think next is the agility piece and being able to finish at the basket against someone with the same size. That’s going to be a big key.”

Lamke is having as much fun as she can with her new role. She’s one of the leaders of the Gophers’ bench mob, providing energy by shouting and cheering rather than setting screens and rebounding.

“Our team loves doing that,” she said. “We were at New Mexico, and it was us versus their fans in The Pit, and we were just kind of fighting with one of their fans who was yelling at us to be quiet. Celebrating and watching my teammates do great is so much fun for me.”

Said Stollings: “Even though she’s not playing the minutes she wants to, she’s been a good role model for our team, she’s one of the loudest on the bench, and most engaging with fans, and that means something.”

STATS: In three games, Lamke has played seven minutes and scored two points for the Gophers (8-4). She averaged 1.4 points and 1.4 rebounds while starting 14 of 25 games as a freshman.

At a practice after the meet, coach Shunta Paul said, they've discussed making sure shoelaces are tied and snug. But Talaya's win has been a teaching moment  in other ways. "It teaches you to never give up."

Among the World of Outlaws Late Model Series field to run this weekend in the at Mississippi Thunder Speedway, there’s countless combined championships and feature winners. There's also a local driver looking for an upset. 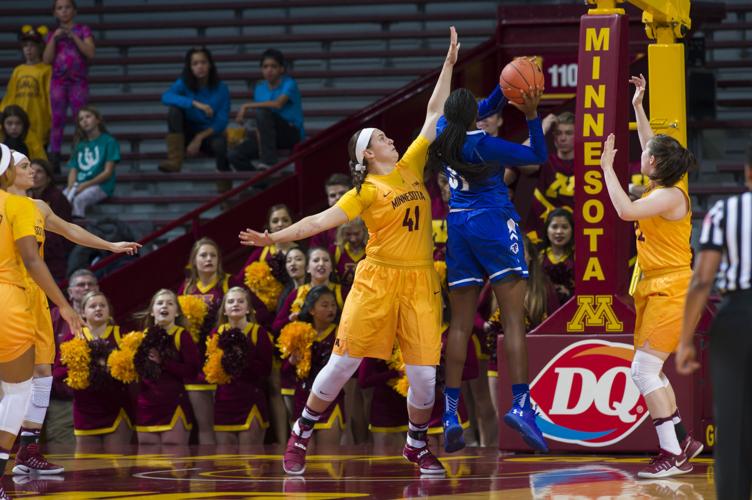 University of Minnesota’s Annalese Lamke defends during a nonconference game against Seton Hall. Lamke, a graduate of Gale-Ettrick-Trempealeau, is a sophomore for the Gophers. 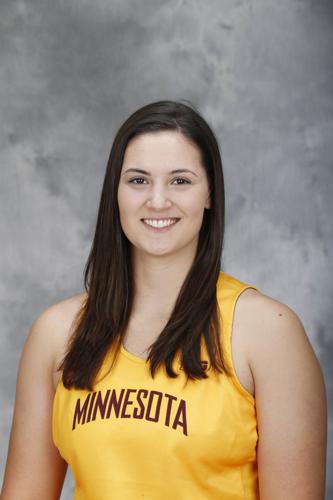