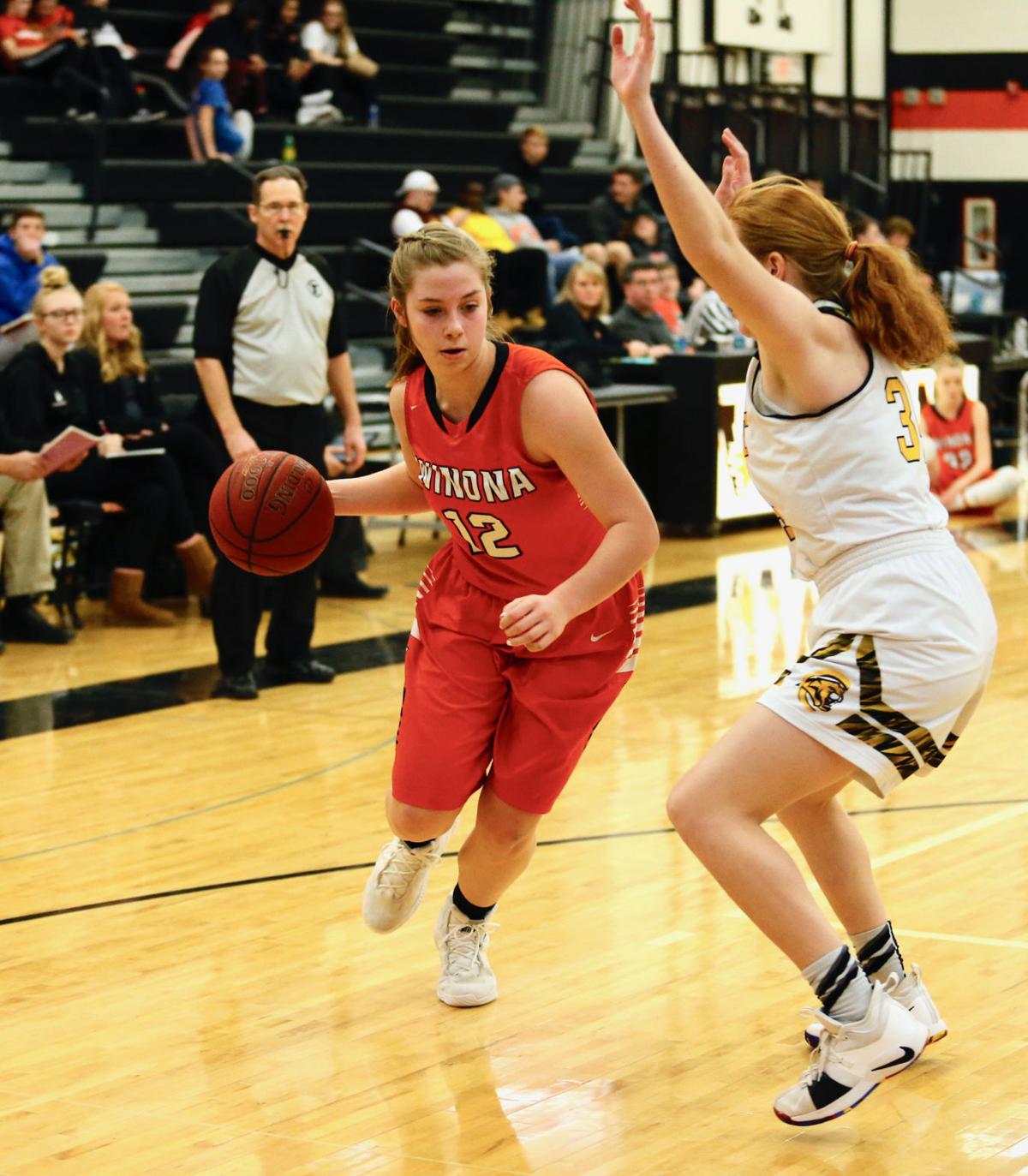 Winona Senior High's Phoenix Matthees (12) dribbles toward the basket during a game in 2019 against Mankato East. Matthees returns after missing last season with a torn ACL. 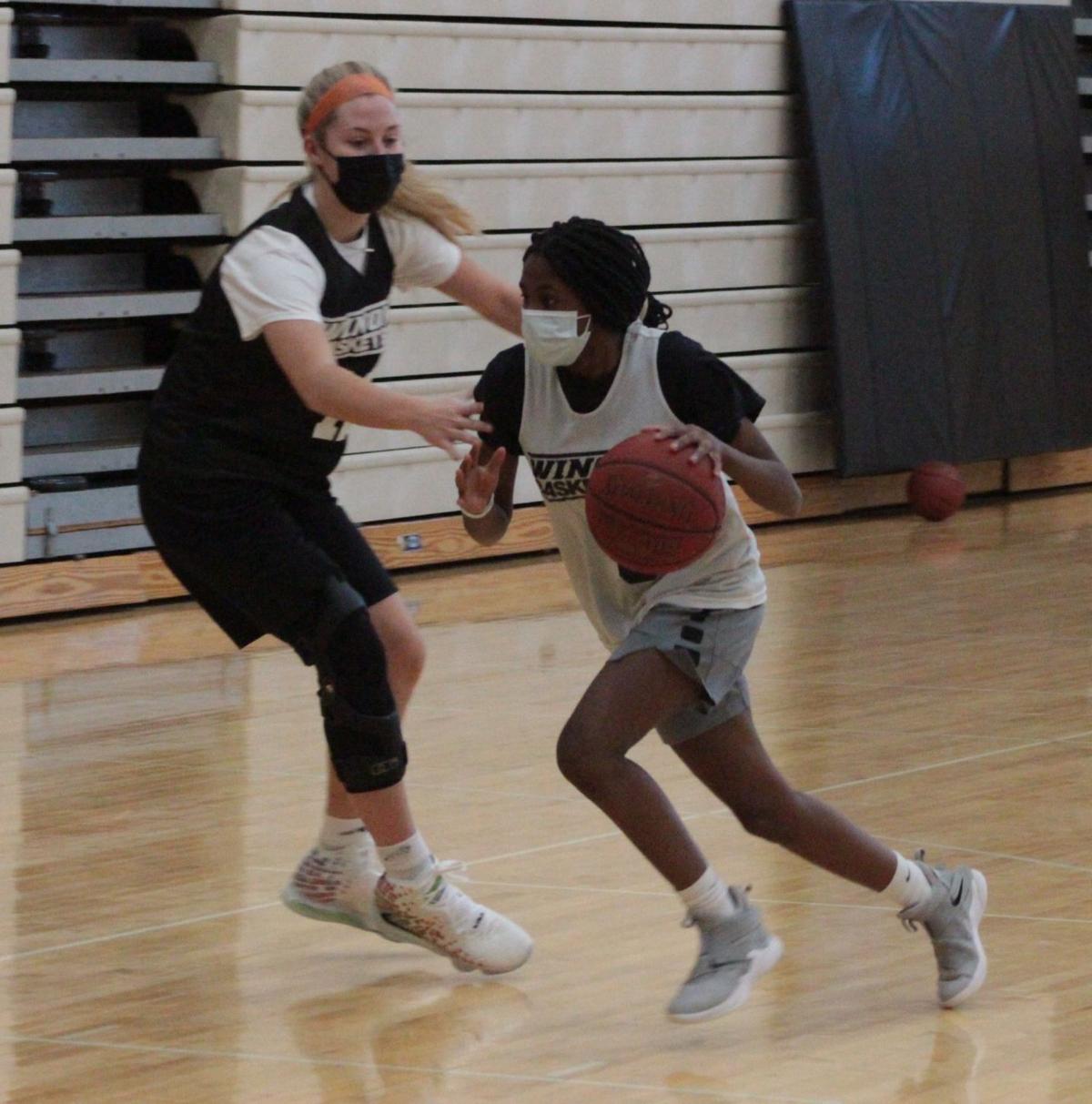 That was the last time Phoenix Matthees suited up for coach Tim Gleason and the Winona Senior High girls basketball team.

The senior tore her right ACL during the final set of the final volleyball match of the 2019 season, forcing her to miss her junior year of basketball.

It’s been a long road back, but extra strength training on top of physical therapy has Matthees feeling better and stronger than ever as she prepares to make the most of her final high school season.

“Now it seems like it’s just as strong, if not better than the other leg,” Matthees said.

The Winhawks missed Matthees last year for not only her scoring prowess and her ability to rebound, but also just the physical presence she offers on both the offensive and defensive ends of the floor. It’s something that is crucial in an always physical and tough Big 9 Conference.

“I don’t even know how to put it into words. She means so much to us,” senior Izzy Goettelman said. “We really needed her last year and not having her was really tough. Most teams are taller than us and she just brings such a physical presence.”

She is one of 12 seniors that will look to help the program regain its reputation as a perennial Big 9 contender.

That’s right, that wasn’t a typo.

The Winhawks have 12 seniors this season, all of whom were contributors last year.

“I’ve never coached a basketball team that’s had 12 seniors,” Gleason said. “I don’t even know if that has existed in girls basketball in the state of Minnesota. I just think they’re in many ways an anomaly. They’re rare. … They’ve got a confidence about them.”

It’s a testament to who they are, too.

With the program in a bit of a rebuilding phase since the 2016-17 season that saw the Winhawks finish with their second straight state runners-up finish, this group has stuck out the bad times. Now they want to leave their own legacy behind.

“We want to leave a mark,” Matthees said. “All of us have been playing together for so long. We want to do something that everybody will remember.”

“They have fond memories of watching the people before them put that uniform on and got to play in the acclaimed Williams Arena,” Gleason said. “These girls were seventh and eighth graders and when I listen to them talk about those girls, they do it with reverence. That’s pretty cool. One of the things they know is that there’s a lot of impressionable people in the gym, and that next group is going to look at you the same way. You are going to plant those seeds for the next generation of Winhawks coming after you.”

Matthees will obviously be a key part in that happening, but so are seniors Katie Clemons and Julia Kronebusch. And if the volleyball season was any indication, then so will Izzy Goettelman. Another name to keep an eye on is Marquetta Berlin-Burns, who was singled out by Matthees and Goettelman as someone who could take a big leap this season. The track and field star has the potential to wreak havoc on the defensive end with her speed and quickness.

“She’s going to be on the ball, and she’s going to get so many steals,” Goettelman said. “She’s so fast, obviously. She could lap me about 50 times.”

Fellow speedster Annissa Lee, along with seniors Emma Heinert, Emma Koehler and Paige Grafton, are also expected to be key contributors for a season that is unlike any others.

A shortened 18-game season with the playoffs still to be determined are only a part of it. The enforcement of wearing masks during play will be a challenge as well. But it’s worth it as they just want to be on the court — where they expect to surprise some people this year.

“I think it will be special,” Goettelman said. “I think it will be better than most people think. It’s just the connection we all have. We don’t have drama on our team. In the past we had some splits and I just feel like all of us get along so well. We’ve been playing for so long. We all know how each other works like what we do great, where we have our weaknesses in and how we, can help each other.”

KEY RETURNERS: Winhawks welcome back 12 seniors, including Phoenix Matthees, who missed all of last season with a torn ACL.

For years, the Cotter girls basketball team has hung their hat on their ability to play defense.

Get one percent better everyday: Mindset for Winona/Cotter wrestling stays the same in unprecedented season

It will be a much different look for wrestling season this year.

New faces in new roles is nothing new for Kyle Martin and the Winona Senior High boys basketball team.

Thursday kicked off a new era for the Winona Senior High boys swimming and diving team.

“We might surprise some people,” coach Fran McDevitt said. “I think people are expecting us to take a step back this year, but I don’t think we are. We might be better than we were last year.”

Winona Senior High's Phoenix Matthees (12) dribbles toward the basket during a game in 2019 against Mankato East. Matthees returns after missing last season with a torn ACL.