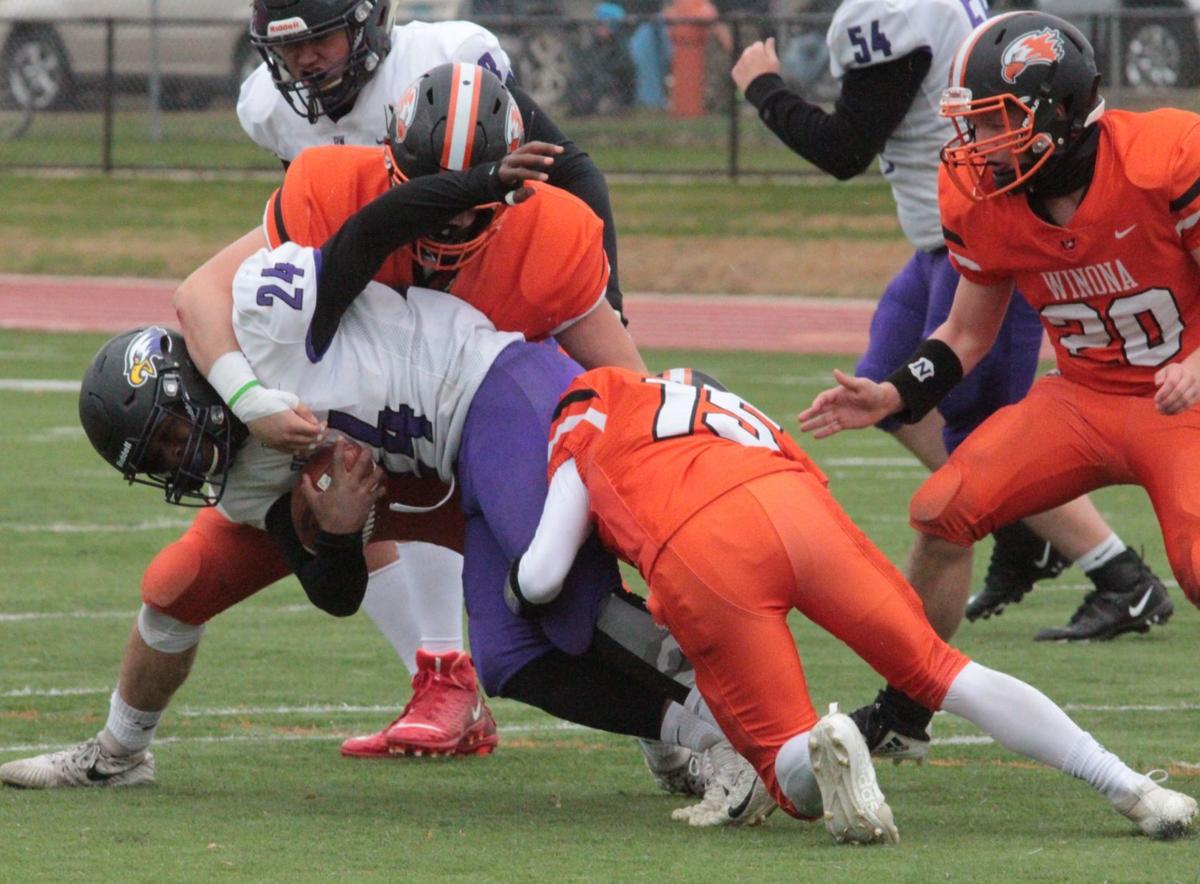 Winona's Thomas Modjeski (15) and Jack Thompson combine to bring down Red Wing running back Antonio Finley during Saturday's game at Paul Giel Field. The Winona defense held the Wingers to under 200 yards of total offense. 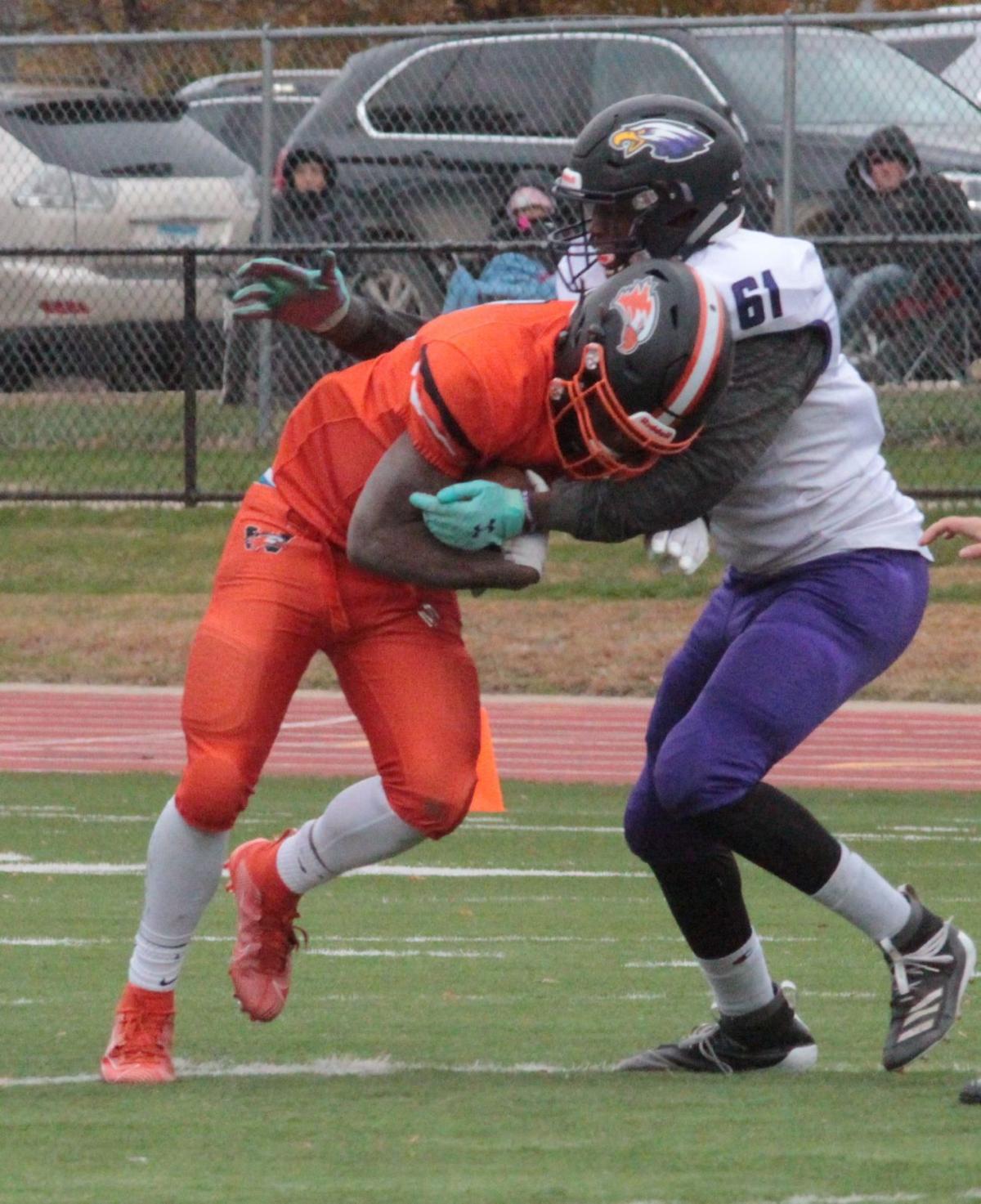 Winona running back Dominic Davis tries to shed a tackle during Saturday's game against Red Wing. Davis finished with 101 yards rushing and a touchdown. 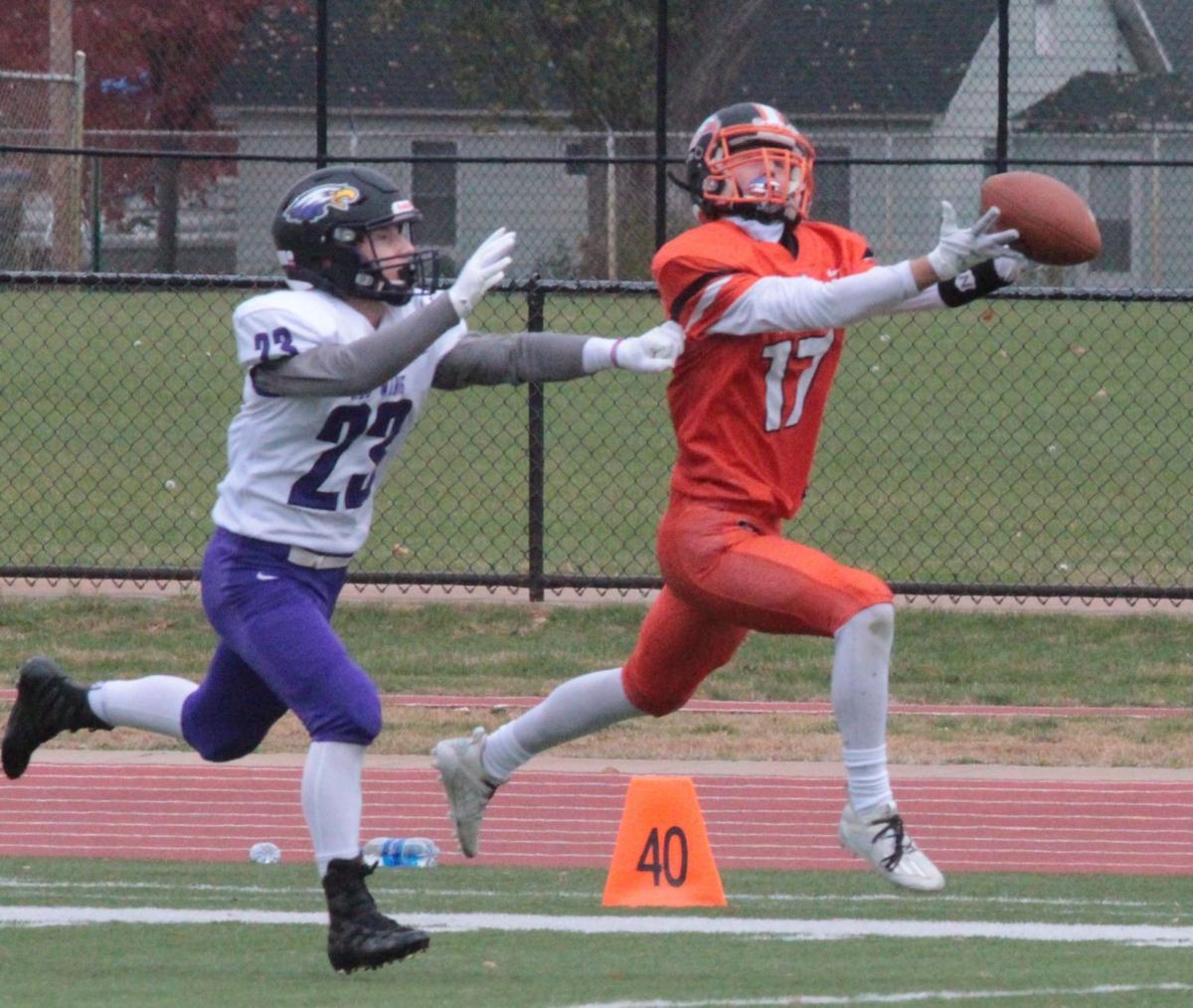 Winona receiver James Molitor has a pass just go off his hands during Saturday's game against Red Wing.

Not even 24 hours after their originally scheduled game against Albert Lea on Friday night was canceled because of a Tigers player testing positive for COVID-19, the Winhawks turned in a gritty defensive effort against an opponent they did not prepare for in Red Wing.

They intercepted the Wingers three times and forced three turnover on downs to shut out Red Wing 24-0 at Paul Giel Field.

The Winhawks have now won 24 straight at Paul Giel.

“We talk about adversity and dealing with adversity,” Winona coach John Cassellius said. “Adversity can be a turnover or missing a block or doing something wrong, but for us adversity right now is having a game canceled and then picking one up and playing less than 24 hours later. I thought our kids did well in how they responded.”

Just eight days after giving up nearly 200 yards to Byron running back Austin Freerksen, the Winhawks defense came to play against Red Wing.

Winona (2-1) held the run-first Wingers (0-3) to just 120 rushing yards on 37 carries, good for just 3.2 yards per carry. Considering Red Wing likes to mix up different formations while utilizing the option, it was a stellar performance from a Winona defense that had little time to prepare.

“It was definitely tough because we were studying for Albert Lea all week, and then we had to switch to Red Wing,” senior lineman Jack Thompson said. “It was tough, but we were just happy to play this Saturday.”

The Winhawks’ defense once again showed on Saturday that when its back is against the wall, it has the ability to buckle down the hatches. Twice it turned back the Wingers on a fourth down attempt on its side of the 50. And after the offense fumbled inside its own 10 — setting up a goal-to-go situation for Red Wing midway through the fourth quarter — it was the Winhawks’ defense that answered the call with a Trent Langowski interception.

Offensively, the Winhawks got their day started with a 13-play, 74-yard drive that was capped off by a 1-yard plunge from quarterback Jacob Heftman.

On their following drive, the Winhawks appeared in great position to add to their lead, but after a dropped pass on third down, the Wingers picked off Heftman on fourth-and-4. That began a string of eight straight incompletions for Heftman.

Heftman regained his groove after the Winona defense forced a turnover on downs with about 1:30 left in the first half — giving the Winona offense the ball at the Red Wing 46. Heftman connected with Langowski — who made a leaping grab — for a 38-yard catch and run on third-and-10. The next play, those two connected again with Heftman delivering a perfect pass to the corner of the end zone for an 8-yard score. Heftman finished the day 8-of-17 passing for 92 yards.

Langowski believes the offense is just scratching the surface.

“We played well,” Langowski said. “I think it’s just another game of younger guys getting reps. They are still learning and getting better every week. Even the older guys, everyone is just getting better. This is only our third game and we didn’t even know we were going to play these guys until last night at six o’clock, so I think we played really well. We took the aggression to them — which was kind of opposite to last week.”

After not being real pleased with the running game the first two games of the season, the Winhawks made it a priority to establish the ground game against Red Wing.

The results were impressive.

Led by Dominic Davis’s 101-yard performance on 16 carries — that included an impressive 38-yard touchdown run that made it 24-0 early in the fourth quarter — the Winhawks finished with 194 rushing yards on 37 carries for a 5.2 average.

“Our communication was better up front ,” Cassellius said. “I feel like it was good building block for us and a big step in the right direction.”

Seeing his first significant action at running back, sophomore Mason Langowski added 70 yards on 12 carries, while Heftman chipped in 21 yards.

“Today felt really good,” Thompson said. “We were moving people and we were communicating better this week definitely. We were able to get our running backs a lot of good holes that led to big plays.”

The Winhawks will look to make it two in a row on Friday when they host Rochester Century.

Winona's Thomas Modjeski (15) and Jack Thompson combine to bring down Red Wing running back Antonio Finley during Saturday's game at Paul Giel Field. The Winona defense held the Wingers to under 200 yards of total offense.

Winona running back Dominic Davis tries to shed a tackle during Saturday's game against Red Wing. Davis finished with 101 yards rushing and a touchdown.

Winona receiver James Molitor has a pass just go off his hands during Saturday's game against Red Wing.