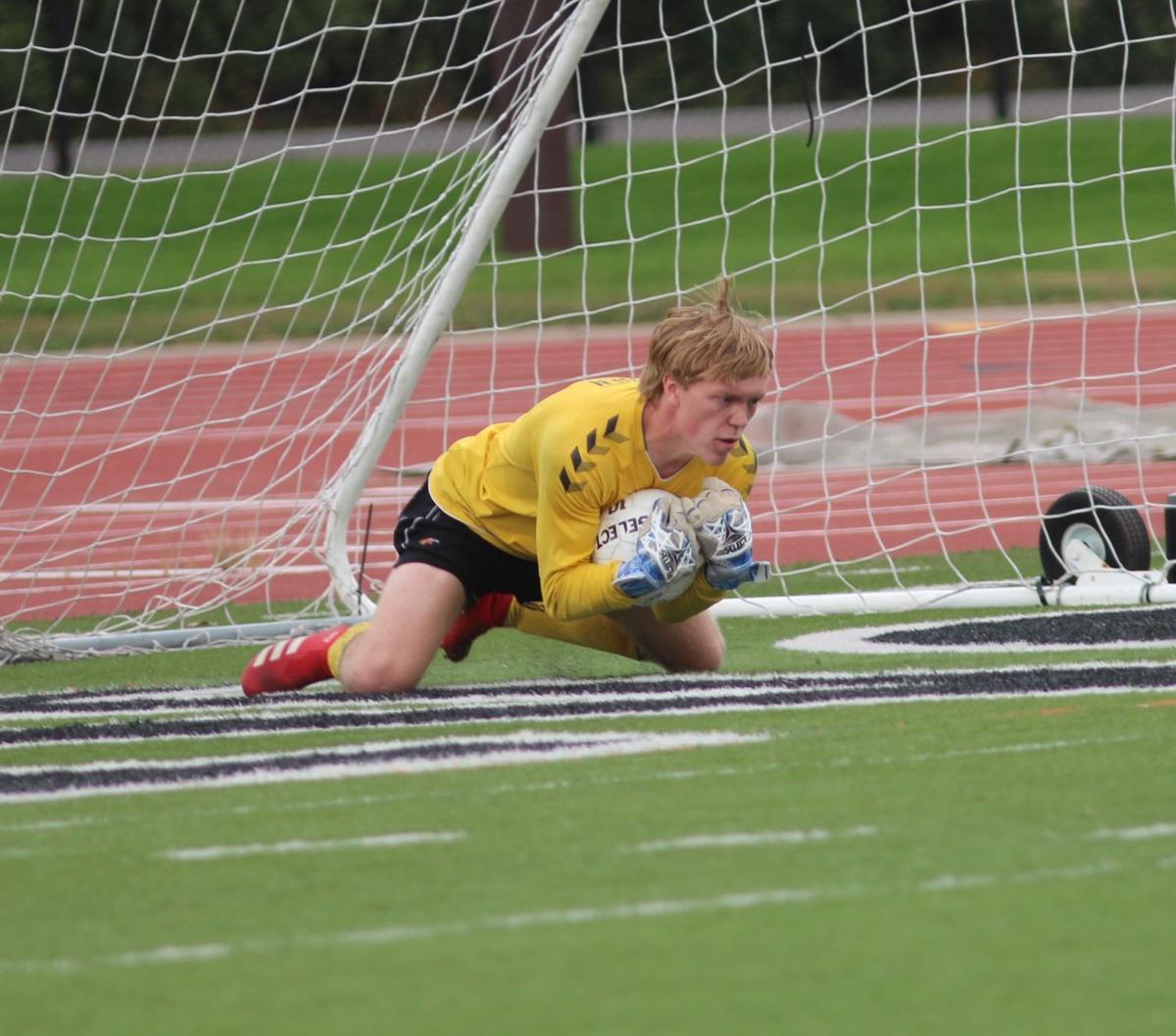 Winona Senior High goalkeeper Hans Larsen makes a save off of a free kick late in the second half against Mankato West Saturday. 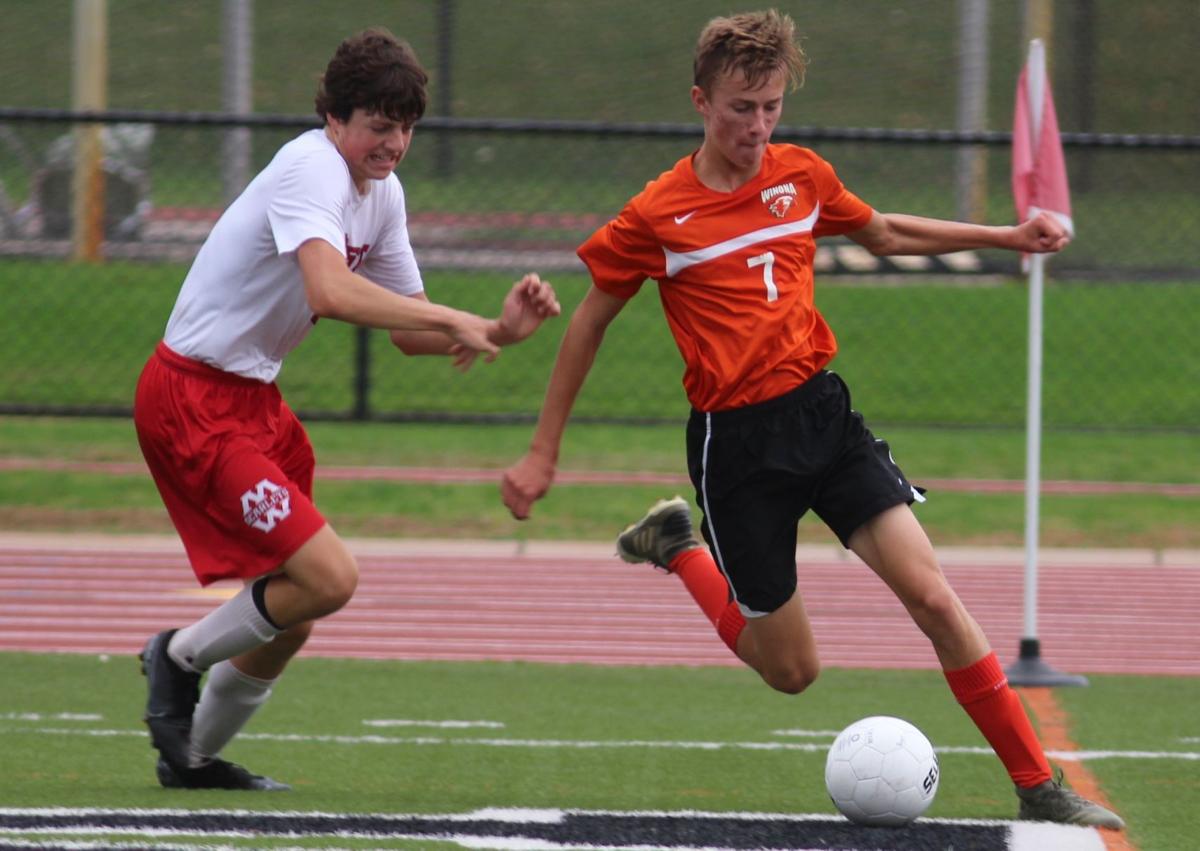 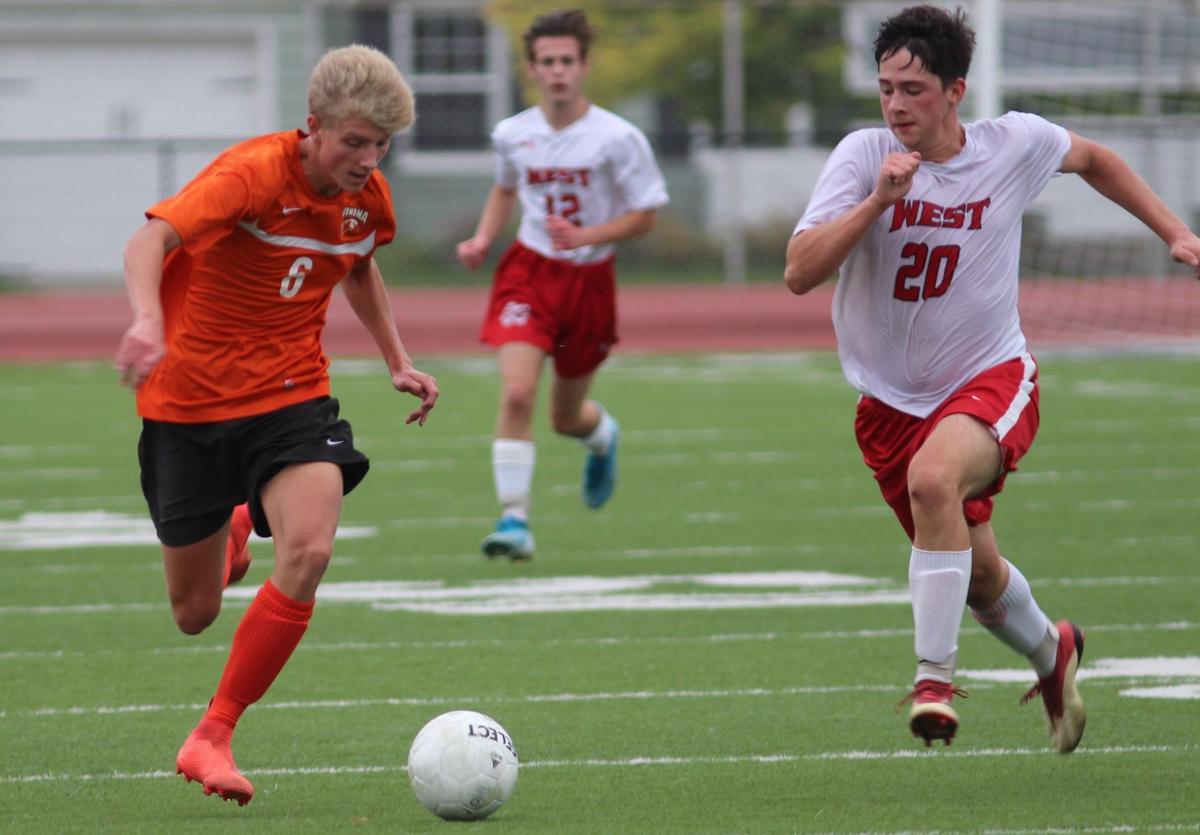 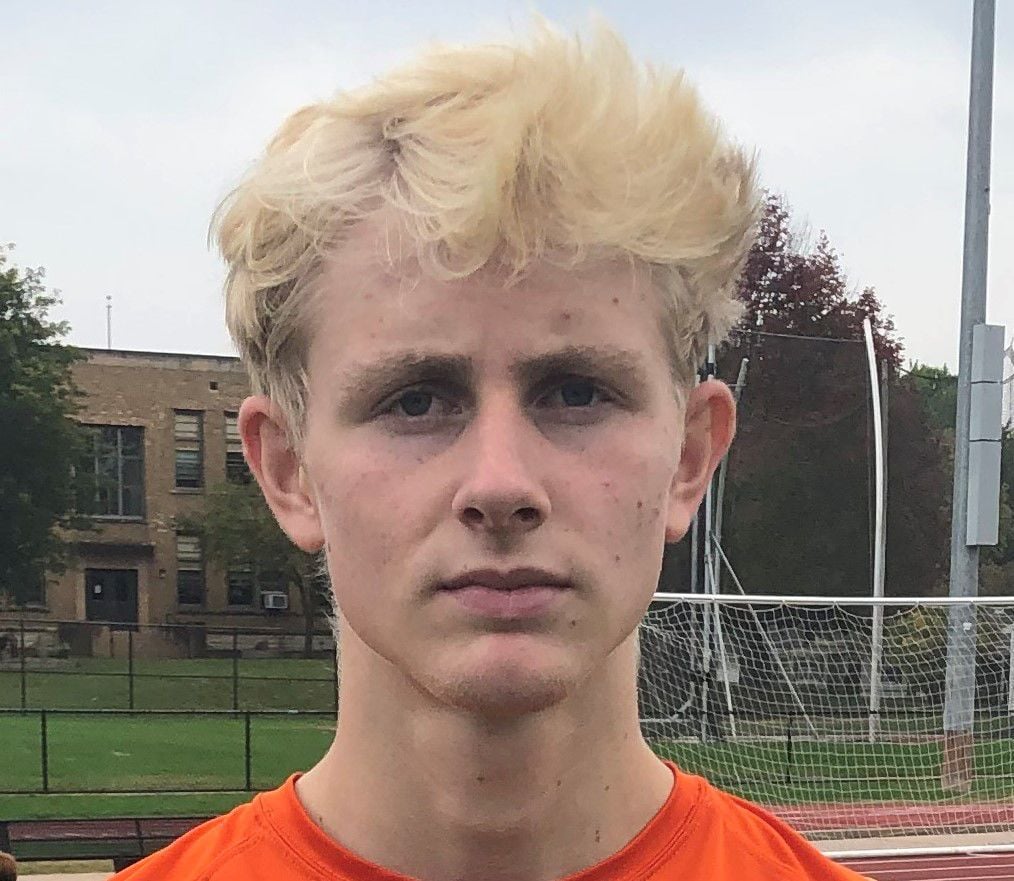 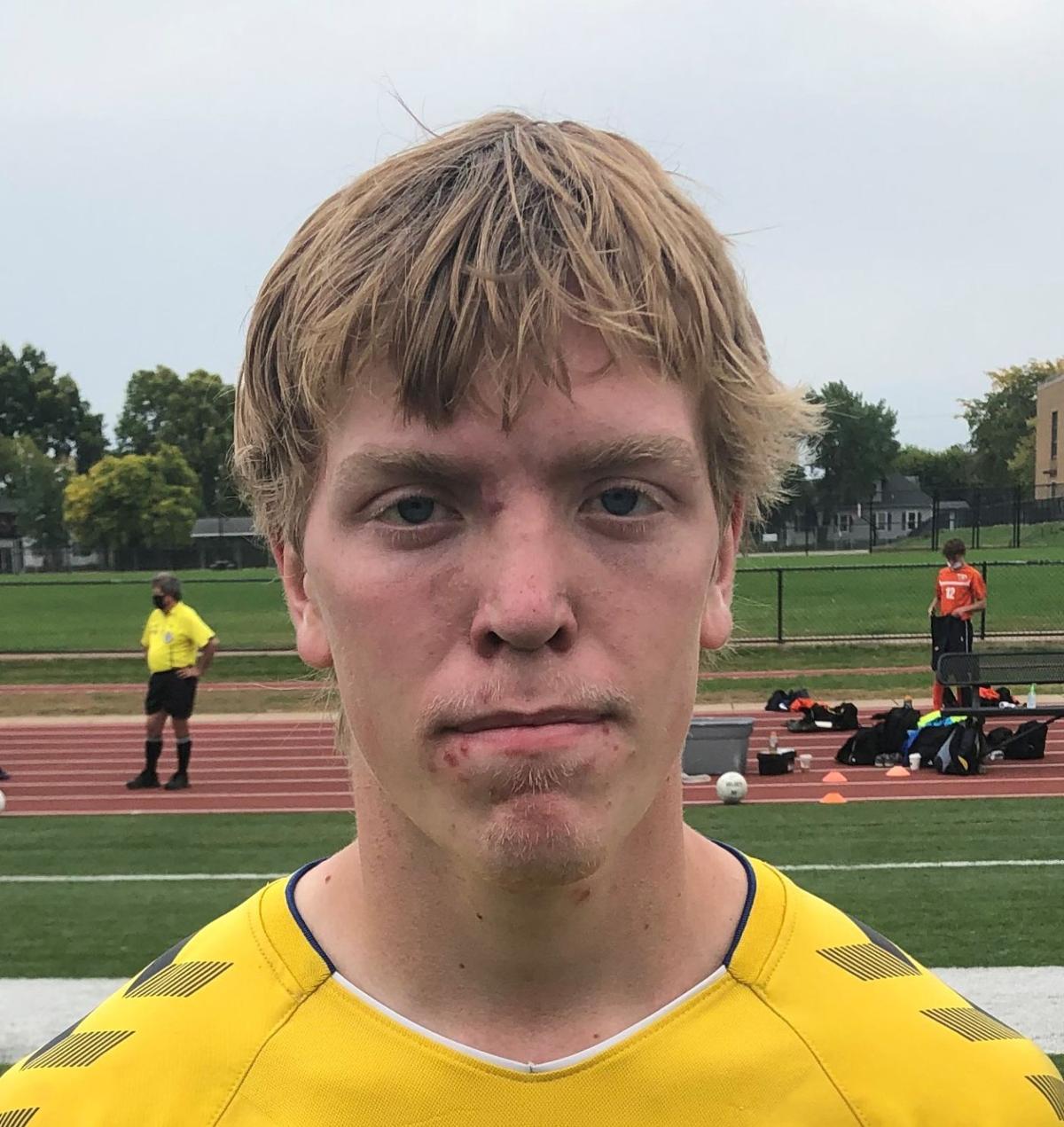 With the youth up front, the Winona Senior High boys soccer team knew its experienced defense would be its backbone this year.

So far this season, it has not disappointed.

The Winhawks pitched their second consecutive shutout, and although the offense couldn’t scratch out a goal, Winona was happy to walk out with a 0-0 draw against the Scarlets at Paul Giel Field.

The Winona backline was a little shorthanded with Florness Jr. missing Saturday’s game to take the ACT, but the Winhawks (2-1-2) didn’t skip a beat with Rasmussen in the lineup thanks in part to that nucleus off Larsen, Appicelli and Motz in the back end.

“Hans has been tough all year. AJ and Zach in the center … have been fantastic and that’s really been our rock,” coach Garrett Ping said. “We gave up two goals to Mayo, and other than that we have given up one goal a game or zero. The back four being seniors, and Coltan stepping today, have just been rock solid and keep us in every game.”

It’s a responsibility the defense takes pride in.

“They are young and are going to make some mistakes,” Larsen said. “We have the experience to back them up when we need to. At least we try, but I think we are doing pretty well so far.”

“We are very understanding, because they are young,” Appicelli added. “A lot of us defenders have a lot of experience so we are kind of used to this. We know we have to do our part and do it the best that we can.”

They were asked to do a lot Saturday, as the physical Scarlets (3-3-1) controlled possession and won seemingly every 50-50 ball, specifically in the first half. West had a great chance to take the lead in the eighth minute when Leo Demars’ pass found Jackson Robbins wide open in the box, who flicked a nice shot before Larsen was able to just deflect it away. Larsen made another nice save eight minutes later with a diving stop to his right.

“The last two games he has kept us in it,” Ping said of Larsen, who finished with eight saves. “He made some fantastic saves that’s for sure.

That was because, like in Thursday’s win, the offense had a hard time finding its rhythm. But unlike Thursday it couldn’t find the back of the net. Its best chance came midway through the second half when sophomore Mason Mueller connected on a pretty through pass to freshman Teis Larsen, who hit it well but just to the right of Mankato West keeper Nicholas Lundberg, who made the save.

“In the second half we definitely bounced back,” Ping said. “Halftime we talked about challenging for 50-50 balls, not just assume they are going to win it. Go up for headers, try to challenge.”

West did put the pressure on late with a couple of free kicks from just outside the box in the final 20 minutes, but the experienced backend never backed down for the Winhawks.

“We are all just really pumped,” Appicelli said. “We don’t know if every game is going to be our last so we have just been putting it all out there every time.”

“It was cool to see this group do it on their own and take that next step,” coach Mike Costello said. “And I think they’ve really developed a culture within the group that is a great example for the younger kids."

LEWISTON — The Lewiston-Altura High School football team forced four turnovers and averaged over eight yards per rush, as they bounced back fr…

The Winhawks will now play in the Section 1A quarterfinals 7 p.m. Thursday against top-seeded Austin.

OWATONNA — With teams being split into five separate sessions due to COVID-19, the MSHSL cross country Section 1AA meet looked much different …

Elsewhere, the Winona boys soccer team saw their season come to an end in Austin.

Winona Senior High goalkeeper Hans Larsen makes a save off of a free kick late in the second half against Mankato West Saturday.