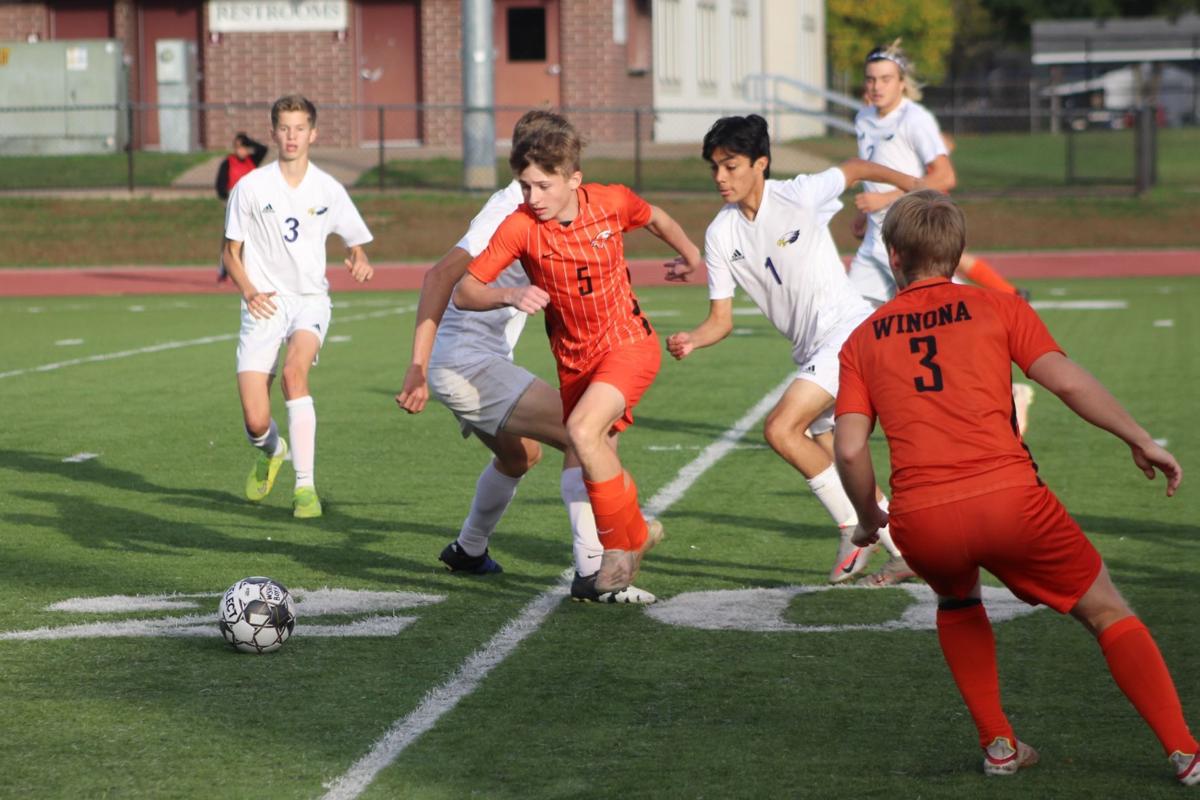 Winona junior Mason Mueler, center, weaves through a pair of Red Wing defenders in the Winhawks' 5-1 playoff victory on Tuesday. 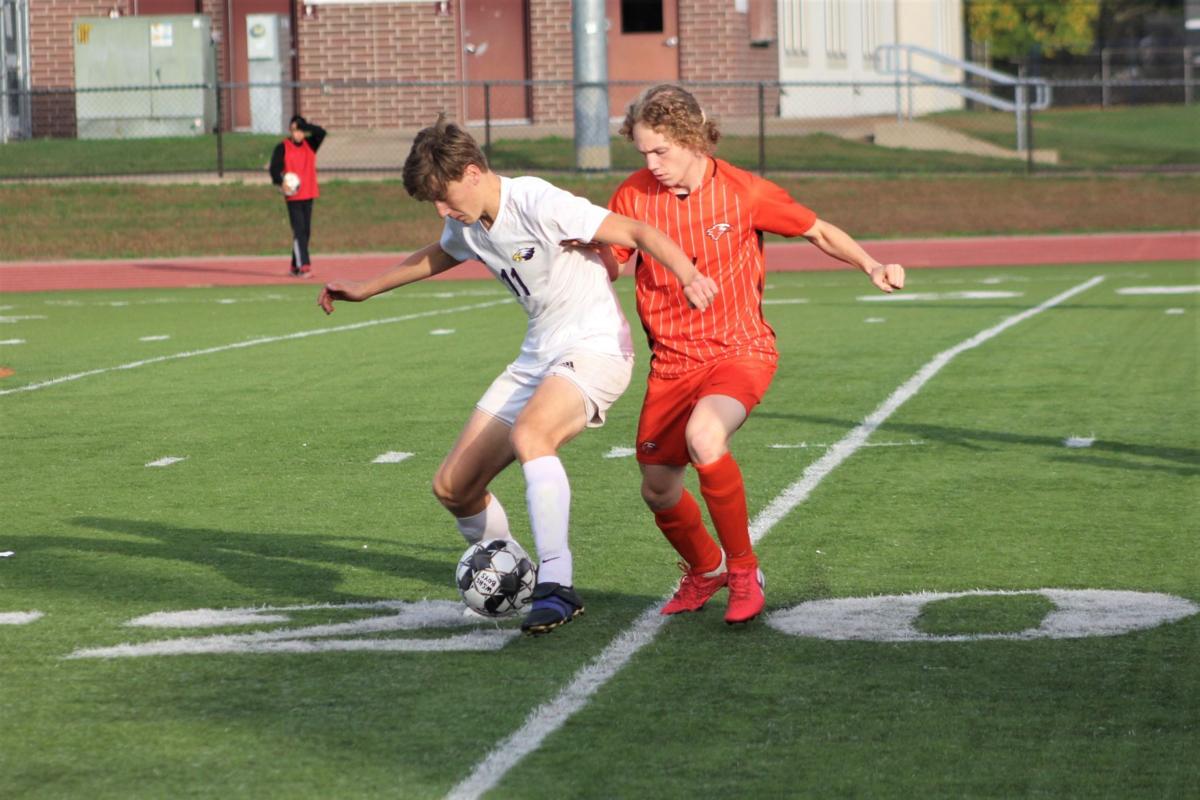 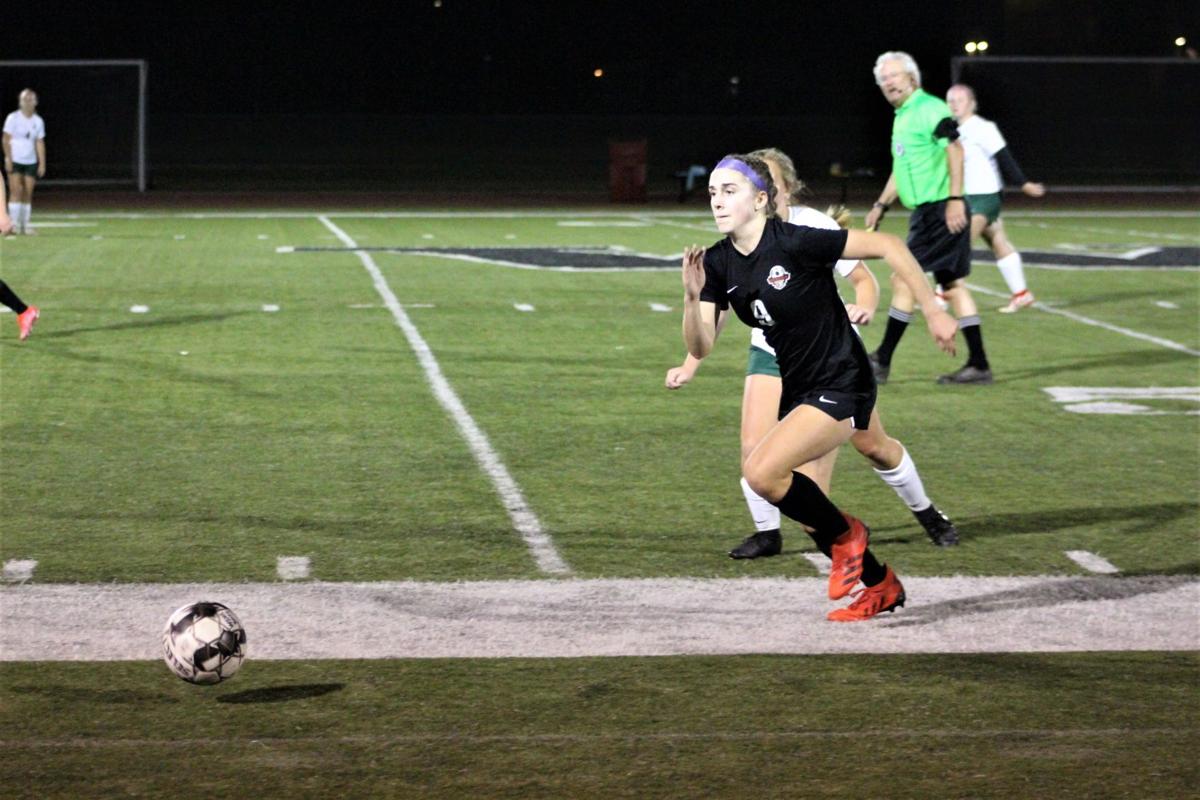 Winona freshman Anna Gilmer, shown chasing the ball above, had a goal in the Winhawks' dominant 12-0 playoff win over Faribault on Tuesday. 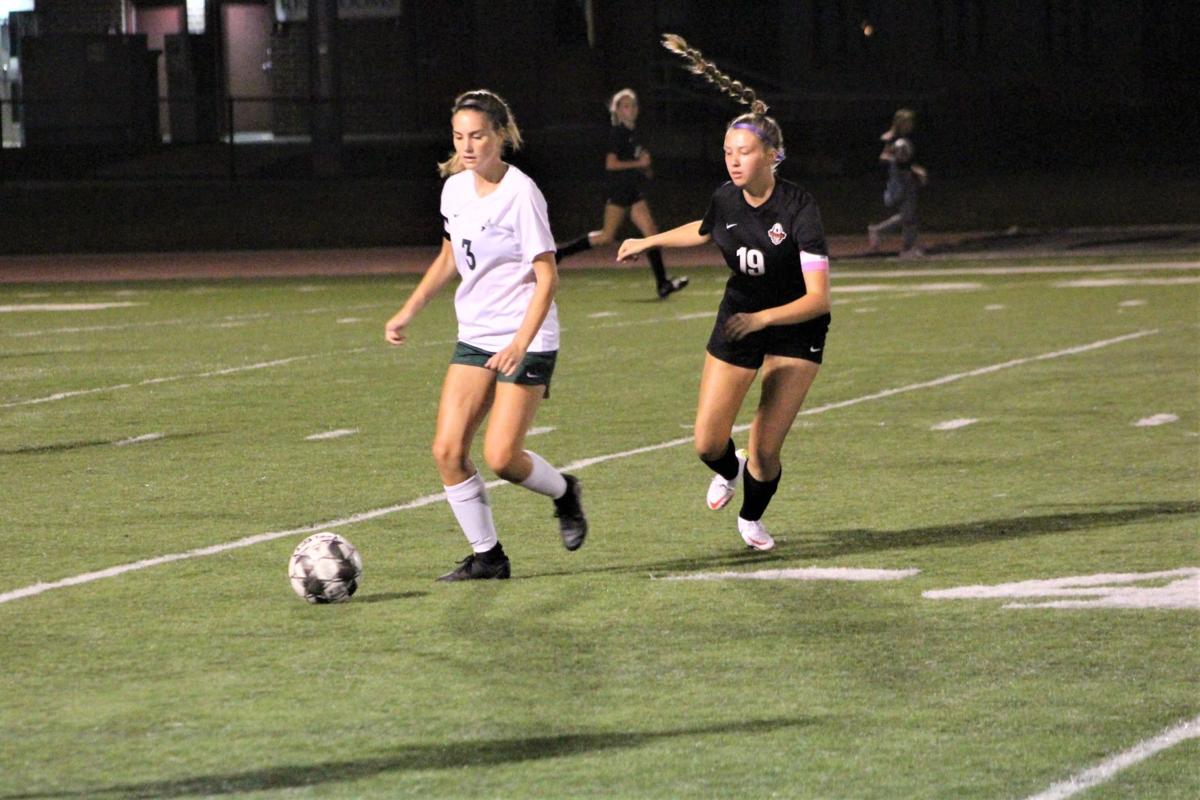 First up were the boys, who defeated Red Wing 5-1 in a 5 p.m. game, which the girls followed up at 7 p.m. with a 12-0 thrashing of Faribault, as both teams advanced to the section semifinals.

From the start, Winona’s boys were dialed in offensively.

It took just under three minutes for the Winhawks to open the scoring, as junior Mason Mueller fired a cross pass to sophomore Teis Larson, who fired a shot past the Red Wing keeper to go ahead 1-0.

Winona’s next goal came 13 minutes later, when junior Rory Biggs chipped a pass forward to senior Adam Kimmerle, who sent it home for a 2-0 lead.

The Winhawks went ahead 3-0 about 16 minutes later when Mueller dished his second assist of the game on a goal by senior Owen Ping.

When Red Wing and Winona faced off earlier this fall in the regular season, the Winhawks won easily 7-1. However, the lone goal allowed came from the Wingers’ star player senior Noah Morgan.

So in the rematch, the Winona defenders were particularly dialed in on stopping Morgan. That plan backfired as they got a bit too physical in the goal box at the 36-minute mark, which awarded Morgan a free kick that he sent to the back of the net to cut Red Wing’s deficit to 3-1.

Winona was able to bump its lead back to three goals before halftime with a penalty kick of their own, as senior Jasper Hedin was successful on a try to make it a 4-1 game with 1:29 remaining until the break.

While a three-goal lead by halftime is typically a cause for celebration, the lead did not come without a cost.

Both Larson and Kimmerle tweaked their knees following their goals, sending them to the bench to miss the remainder of the game, and Ping was fouled hard to earn the late penalty, sustaining an injury he would not return from in the process. It is unclear currently if any of the three will be forced to miss Thursday’s semifinal matchup against Austin.

After only losing one player to injury in the first 16 games of the year, the Winhawks lost three key goal scorers in the first half of the playoffs.

“Today we were hoping to get an early lead and then get guys rest. They got rest, but not the way we wanted,” head coach Garrett Ping said.

In the second half, Winona’s depleted offensive attack could not generate quite as much pressure as in the first. However, the junior Mueller remained on the field and he made his presence felt, scoring a goal after his two first-half assists to put the Winhawks ahead 5-1 in the 62nd minute.

He may not have been surrounded by the typical cast of offensive compliments, but Mueller thought that the Winhawks’ reserves played well once pressed into action.

“They did step up big for us, and they created opportunities because I wouldn’t have been able to do what I did without them there,” Mueller said.

In the remaining 19 minutes of the game, neither teams scored, in part thanks to solid defensive play by Winona’s starting defenders, who played nearly the entire game without a break to help stabilize the team with uncertainty up front.

Even if the injury situation put a damper on the total number of goals scored, the Winhawks still accomplished their number one goal and advanced in the playoffs.

When the Winona girls stepped onto the field less than a half hour after the boys game ended, they matched their male counterparts’ early offensive aggression.

Adriana Brenengen scored in the third minute, the first of three goals in the game for the freshman, and it was off to the races from there for the Winhawks. Sophomore Faith Quinn scored two minutes later for a quick 2-0 lead.

Senior Ella Mueller scored one more goal before halftime to give Winona a 9-0 lead at the break.

While it may sound like WSHS was pouring it on against an underwhelming opponent, it was not without cause — the Winhawks were trying to make sure they tuned up their weak spots for their upcoming slate of playoff matchups against tougher teams.

Winona’s defensive acumen throughout the year cannot be questioned, with the Winhawks winning nine shutouts and allowing only one goal four additional times. However, the team also scored more than three goals only four times in the regular season, so the players and coaches felt they needed to try to find a groove in terms of scoring any way they could.

“We struggle with our crosses and finishing, and that’s what we kept doing on repeat,” Mueller said. “We finally got some in-action, game-time speed practice with crosses.”

In the second half, the Winhawks took their foot off the gas and still scored three more times, with sophomore Maddie MacLennan, freshman Kasja Kovala and junior Rylie Liston all scoring for a 12-0 final score.

With the lopsided victory, Winona coach Katie Pearce said her team did exactly what she asked of them: stay dialed in and stay alive.

“This week we were really trying to give it our all and focus on the fact that it’s sections, and we want to win every game until we get to state,” Pearce said.

Both Winhawks teams will host section semifinals matchups on Thursday night, with the girls playing four-seed Kasson-Mantorville at 5 p.m. and the boys facing off against Austin at 7 p.m.

Neither matchup is against a new opponent, as Winona’s girls won a 2-0 game against K-M on Sept. 9 and the boys lost 2-1 against Austin on Sept. 23.

Winona junior Mason Mueler, center, weaves through a pair of Red Wing defenders in the Winhawks' 5-1 playoff victory on Tuesday.

Winona freshman Anna Gilmer, shown chasing the ball above, had a goal in the Winhawks' dominant 12-0 playoff win over Faribault on Tuesday.