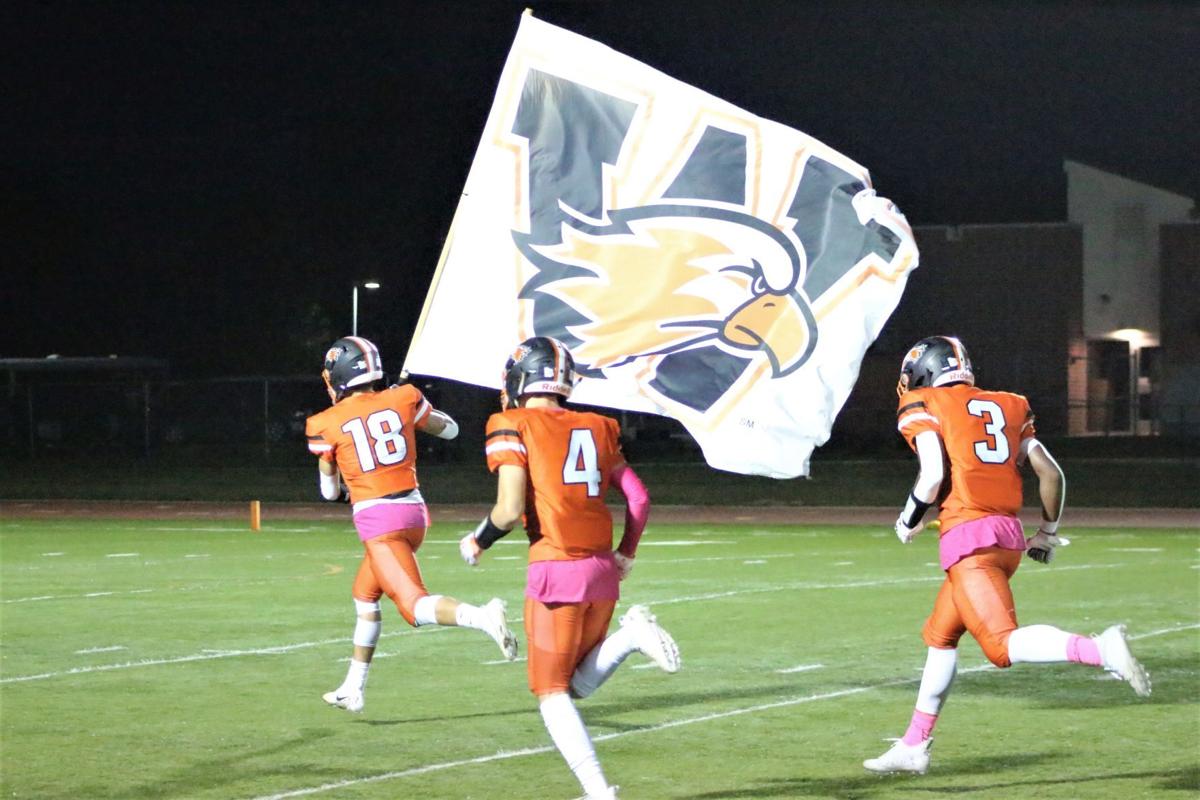 The Winhawks charged onto the field carrying a team flag prior to the team's 41-14 loss to Stewartville on Friday. 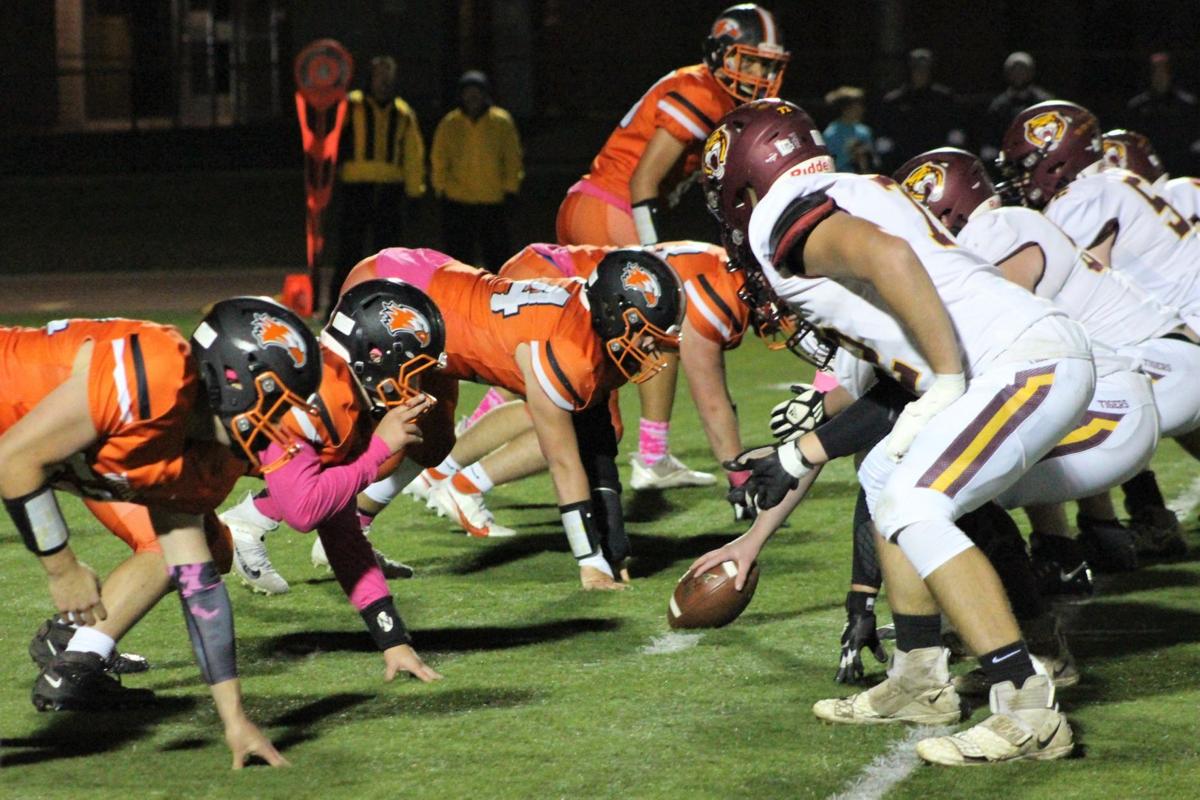 Winona's defensive line gets set prior to a play against Stewartville on Friday night. 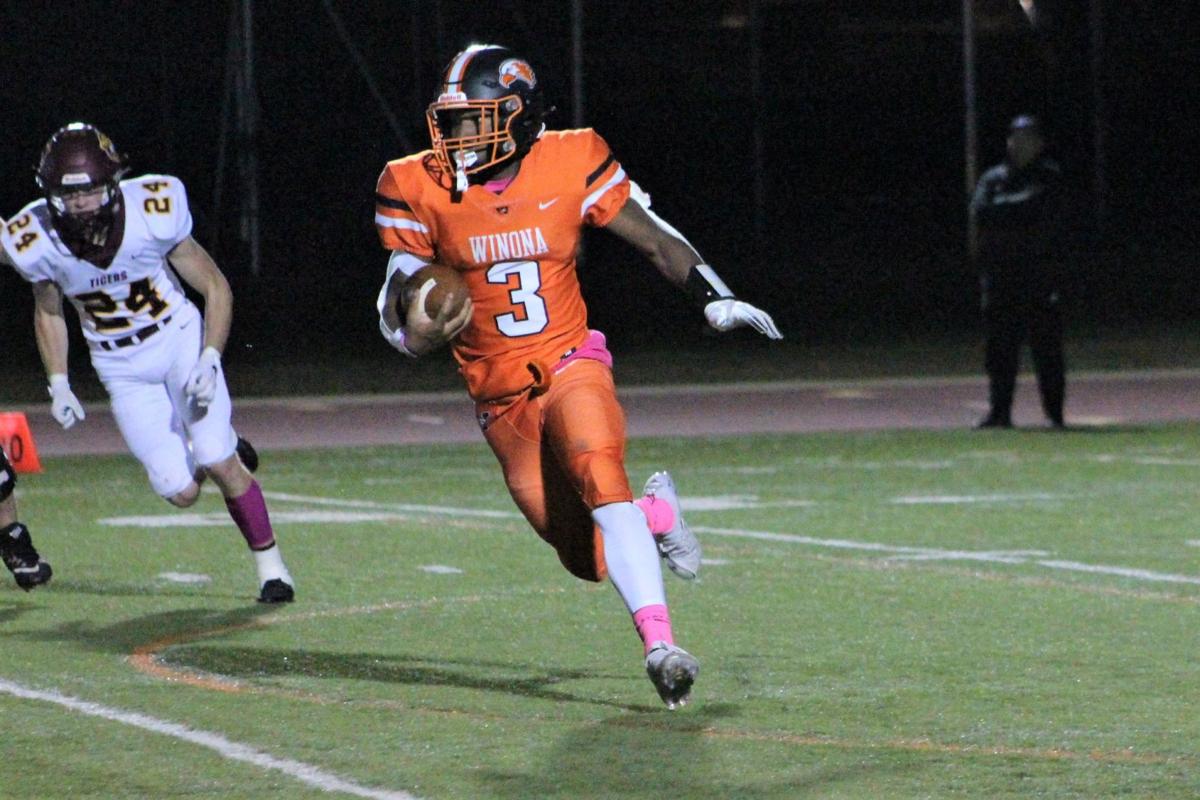 Junior Dominic Davis had a 90-yard touchdown on Winona's biggest play of the night in a 41-14 loss to Stewartville in Friday. 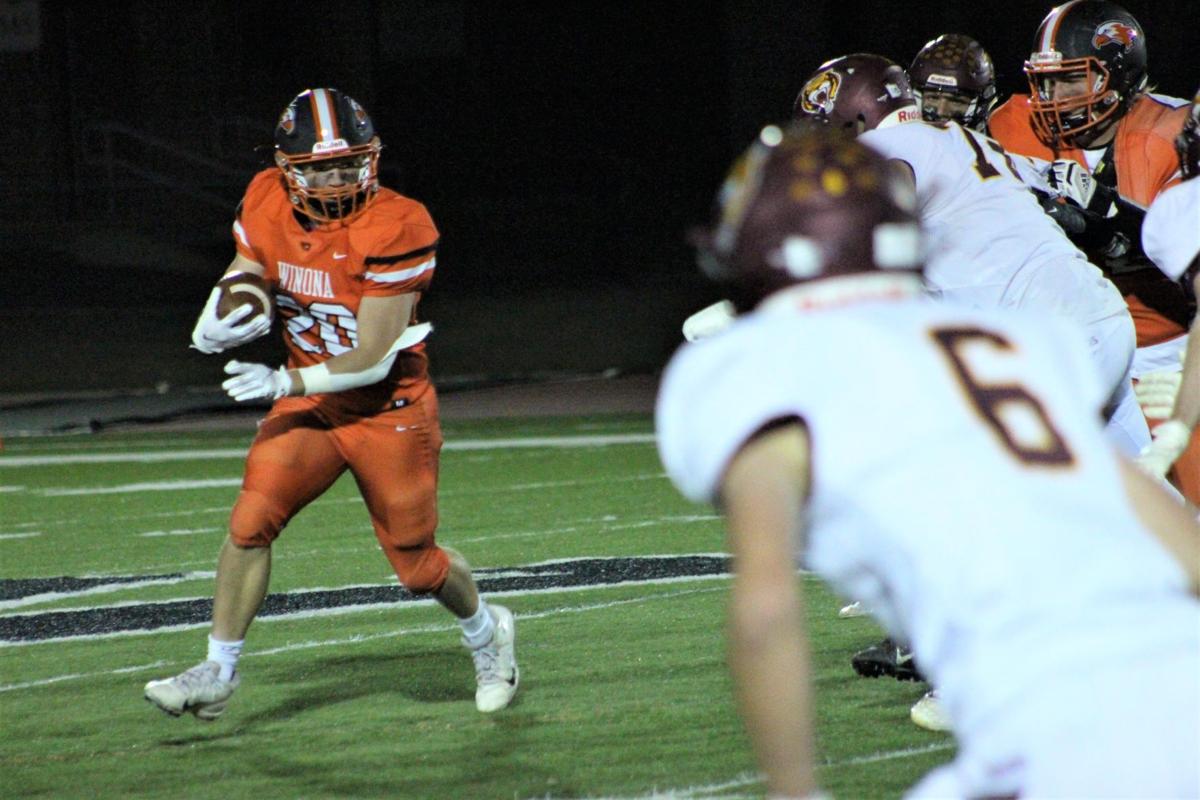 Junior running back Peyton Hoff scored one of Winona's two touchdowns on Friday in a 41-14 loss to Stewartville.

Instead, the Winhawks (3-4) had a handful of inopportune penalties and a pair of special teams gaffes that allowed the Tigers (7-0) to show their strength and stay unbeaten in a 41-14 win.

“They’re a good team and we’ve just got to clean up our stuff and get after it,” Winona head coach John Cassellius said.

It was a rough start to the game for the Winhawks, who quickly fell into a 12-0 hole.

Stewartville marched down the field efficiently on the game’s opening drive, capping things off with a six-yard rushing score by senior Alex Wood. The extra point fell short, though, so the Tigers’ lead was just 6-0.

On Winona’s first drive of the game, the Winhawks failed to get a first down after a holding penalty nullified a big gain on a jet sweep by senior Thomas Modjeski and were forced to punt.

The Tigers blocked the kick, though, and junior Braden Nelson scooped up the loose ball and returned it for a touchdown. Yet again, the PAT was no good, and Stewartville led 12-0.

The Winhawks’ offense moved the ball well on their next drive, getting just outside the red zone. On fourth-and-seven at the 38-yard line, WSHS lined up to go for it, though a false start moved the team back five yards. Then an unsportsmanlike conduct penalty prior to the snap moved the ball even farther back to a fourth-and-27 that forced the Winhawks to punt.

After that poor first quarter, Winona started to find its groove in the second.

Stewartville moved into the red zone with ease, though the Winhawks defense stiffened up inside the 10-yard line and forced the Tigers to attempt a 25-yard field goal. Winona junior Dominic Davis blocked the kick, and Winona’s sideline seemed rejuvenated by the play.

When the Winhawks offense returned to the field, it Davis was under center. After losing senior starting quarterback Jacob Heftman two weeks ago, Winona has been trying out different players at the position.

Davis, typically the team’s running back, ran a wildcat-style option attack that was effective as the Winhawks took less than two minutes to move down the field and score on a four-yard rush by junior running back Peyton Hoff to make it a 12-7 score at 7:09.

The Tigers responded to the score by methodically moving down the field, scoring at 2:44 on a one-yard rush by Wood. With two missed PATs already, Stewartville attempted a two-point conversion and an illegal man downfield penalty nullified a successful pass, which the Tigers then followed up with an incompletion on their second try for an 18-7 score.

Following an incomplete pass and a fumbled snap, Winona was in a dire situation facing third-and-25 on their own 10-yard line. Cassellius had faith in Davis, calling a quarterback draw, and the play paid off as the junior weaved through the Stewartville defense until he found open space and then he turned on the jets for a 90-yard touchdown.

“He makes things happen. We didn’t know exactly what was going to happen, but we needed to get some room and he’s electric and he can make things go,” Cassellius said.

After the extra point, Winona was only trailing 18-14 with 1:52 remaining until halftime.

Stewartsville executed their two-minute drill very well, moving to the 10-yard line in just over a minute, giving themselves 30 seconds and four downs to try to regain some breathing room.

Just like earlier in the quarter, Winona’s defense stiffened up as junior defensive back Mason Langowski intercepted a pass in the end zone to prevent a score and keep the deficit at four points heading into halftime.

When play resumed in the second half, it seemed like the Winhawks were picking up right where they left off.

The offense moved to midfield with ease on the opening drive, and Davis busted free for a 42-yard touchdown run. However, the score was called back due to holding at the line of scrimmage, and the WSHS offense stalled from there, failing a fourth-down conversion a few plays later.

That penalty was the Winhawks’ costliest of the game, but it was far from the only one in a messy game for the team overall. If they had not made so many mental mistakes, Cassellius thinks the final margin would have been more in their favor.

“I think we’re definitely a lot closer because it changes the way we can call our offense and the things we can do if we don’t put ourselves in those long situations,” Cassellius said.

Wood scored his third touchdown of the game later in the period, and a two-point conversion made it a 26-14 score heading into the fourth quarter.

While the score was not quite out of reach at the start of the fourth, Stewartville quickly iced the game. Wood scored one more time, and Tigers’ junior return man Owen Sikkink scored on a punt return for a 41-14 lead midway through the fourth that would hold until the end of the game.

"This leg will never be what it used to be", but Tiger is 'on the positive side'

"This leg will never be what it used to be", but Tiger is 'on the positive side'

The Winhawks charged onto the field carrying a team flag prior to the team's 41-14 loss to Stewartville on Friday.

Winona's defensive line gets set prior to a play against Stewartville on Friday night.

Junior Dominic Davis had a 90-yard touchdown on Winona's biggest play of the night in a 41-14 loss to Stewartville in Friday.

Junior running back Peyton Hoff scored one of Winona's two touchdowns on Friday in a 41-14 loss to Stewartville.