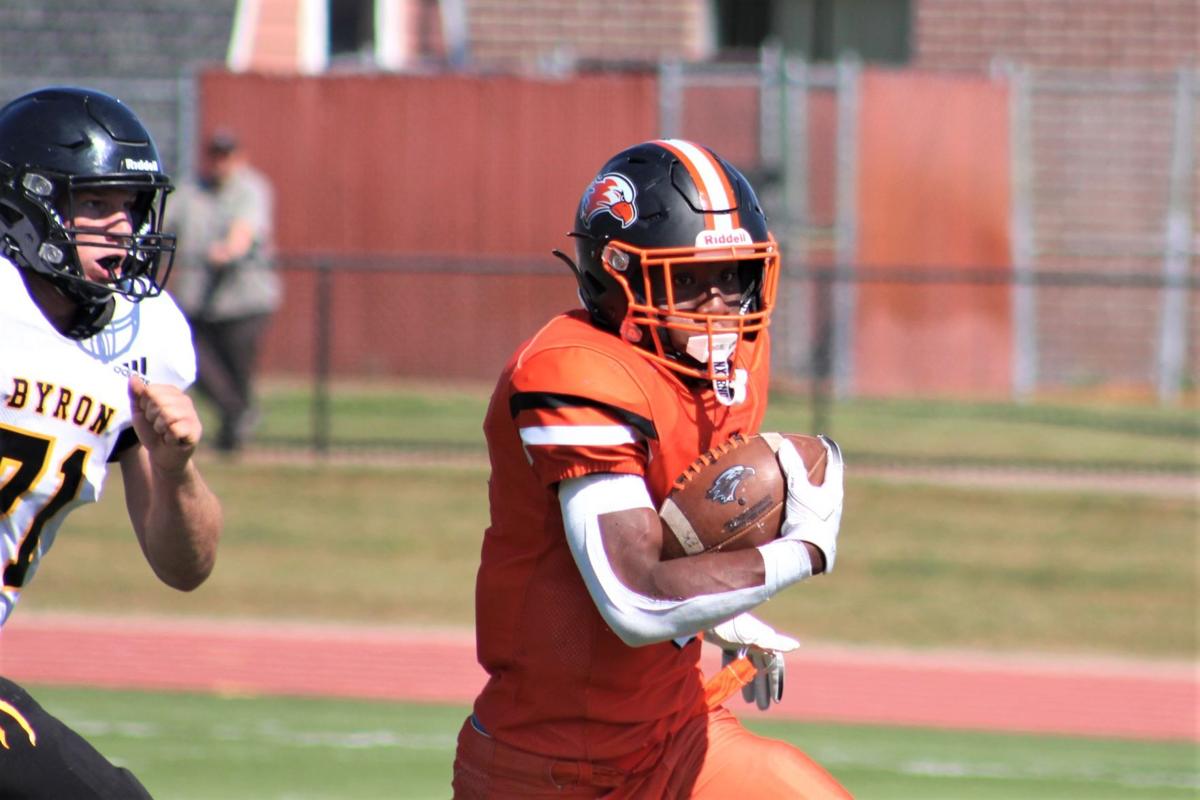 Winona junior running back Dominic Davis scored a pair of touchdowns in the Winhawks' 23-16 win over Byron on Saturday. 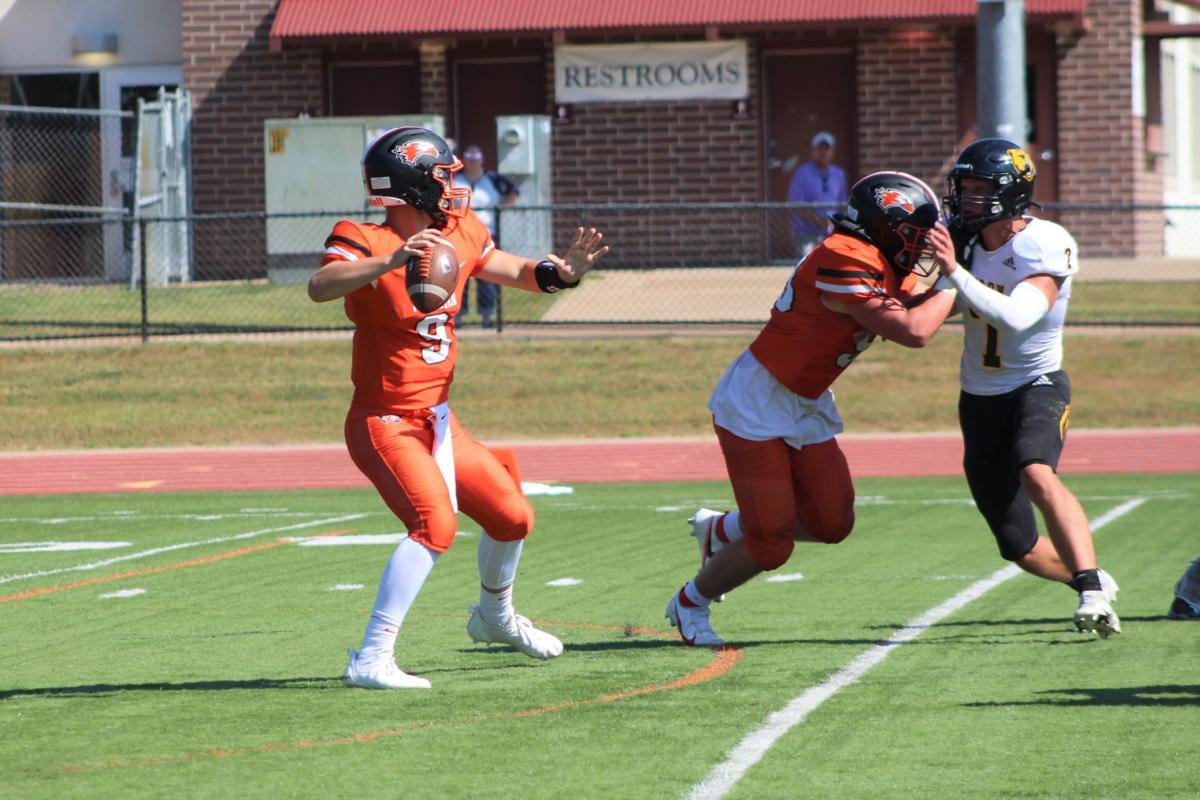 Winona senior quarterback Jacob Heftman reaches back to throw in the Winhawks' 23-16 victory over Byron on Saturday.

It was a tale of two halves at Paul Giel Field on Saturday, when the Winona Senior High School football team overcame a 16-point halftime deficit for a 23-16 win.

The game got off to a terrible start for the Winhawks (2-1, 2-1), with a muffed punt and a muffed kickoff that gave Byron (0-3, 0-3) fantastic field position on a pair of drives. Those were turned into a 10-0 Bears lead at the halfway point of the first quarter ... before the Winona offense had stepped onto the field.

Despite the obvious uphill climb, Winona coach John Cassellius had to make sure his team did not let its poor play snowball.

“We can’t hang our heads when we make a mistake,” Cassellius said.

Things settled down for a bit, with neither team gaining much ground until Byron scored on a 54-yard touchdown catch by senior James Durst with 6:55 remaining in the second quarter. The snap on the extra point was botched, though, so Byron’s lead was only 16-0.

At the time, it seemed like a minor miscue, but by the end of the game, that single point loomed large.

The final minutes before halftime were sloppy, with a missed Byron field goal and a pair of Winona interceptions that kept the score 16-0 heading into the break.

While Cassellius admits he wishes his team had not taken better care of the ball, the halftime margin could have been much worse.

“We told our guys at half, we had four turnovers in the first half and we’re only down by two scores, so believe that you can come back and get a W here,” Cassellius said.

The tide started to turn as soon as play resumed after halftime.

Winona held the ball for just over seven minutes on a sustained opening drive that went into the red zone and resulted in a 32-yard field goal by Bryan Casselius to cut the deficit to 16-3.

After the defense forced a quick punt, the Winhawks’ offense moved down the field in chunks and found the end zone for the first time of the afternoon. Senior quarterback Jacob Heftman hit junior running back Dominic Davis on a short passing route, and Davis weaved through the defense to score a 23-yard touchdown to make it a 16-10 game with 10:32 left.

In a nearly identical turn of events, Winona’s defense forced another quick punt and the offense began methodically marching down the field as the clock wound down. Davis found the end zone again, this time punching in a 1-yard run to give Winona a 17-16 lead with just 1:22 to go.

Byron’s offense started to move down the field, though with little time left, the Bears were forced to attempt a 45-yard field goal with 8 seconds left.

Winona called a timeout just before the play so the Winhawks staff could give a couple pointers to their special teams players.

“That’s a longer field goal, so we knew the trajectory was going to have to be a little lower. So we were hoping to get our hands on it,” Cassellius said.

Sure enough, the Winhawks blocked the kick and senior Thomas Modjeski scooped up the ball and returned it for a touchdown as time expired to bring the final score to 23-16.

While it may not have been the prettiest win, Cassellius was happy to see his players overcome a bit of adversity early in the season.

“We did some nice things for us to look at that we know we have to continue to work on. Always there’s stuff to build upon, and I am proud of the kids for believing in each other,” Cassellius said.

Winona will be back in action with a road matchup against Mankato East on Friday Sept. 24. Kickoff is at 7 p.m.

IN PHOTOS: Winhawks pull off comeback win over Byron 23-16

The Winhawks had a handful of inopportune penalties and a pair of special teams gaffes that allowed Stewartville to stay unbeaten in a 41-14 win.

Many area football teams are hitting the road this week, though the Winhawks host a tough foe at home.

The Winona boys and girls soccer teams both lost upsets to see their seasons come to a close in the section semifinal round at home on Thursday.

The Trojans overcame a 2-1 deficit to beat La Crescent-Hokah 3-2 on Thursday night.

The third-seeded St. Charles/Lewiston-Altura girls soccer team had its season come to a close on Saturday in the Section 1A semifinals, losing…

Winona junior running back Dominic Davis scored a pair of touchdowns in the Winhawks' 23-16 win over Byron on Saturday.

Winona senior quarterback Jacob Heftman reaches back to throw in the Winhawks' 23-16 victory over Byron on Saturday.