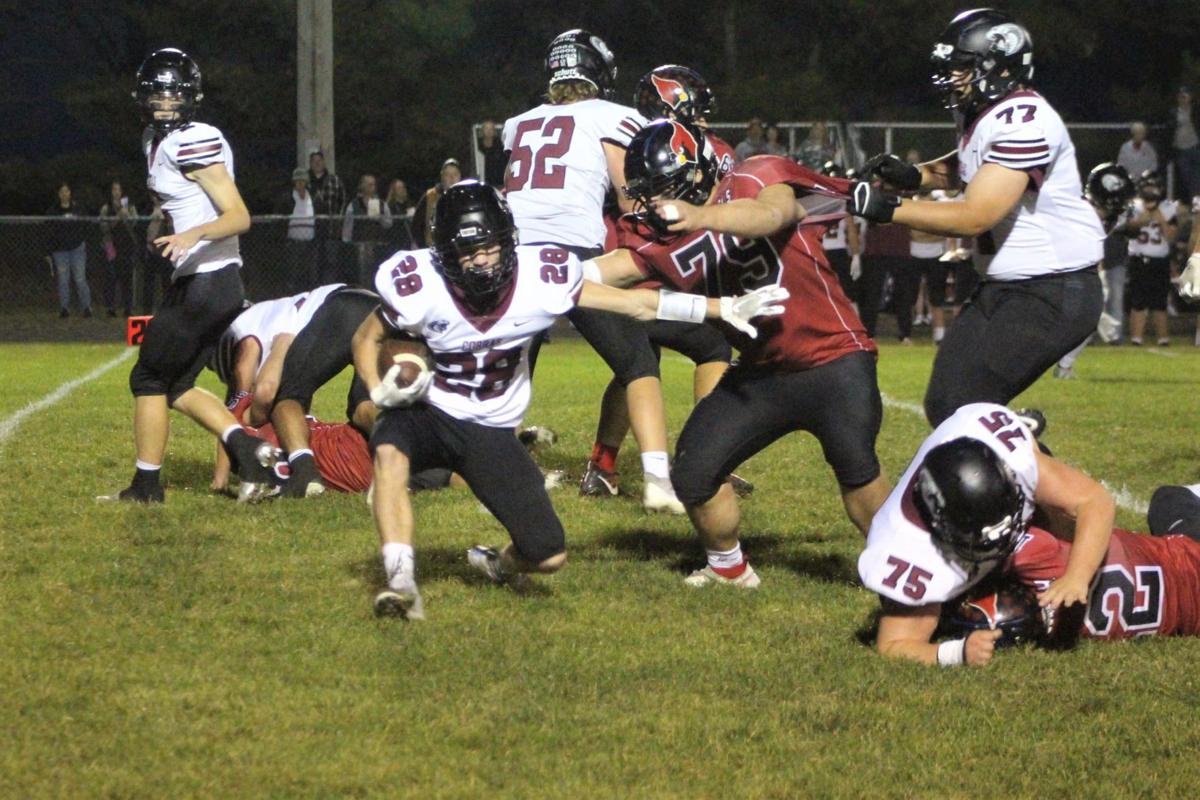 Lewiston-Altura senior Jaydon Boynton forces a Triton lineman into a holding penalty while making a tackle in the Cardinals' 43-42 double-overtime loss on Friday. 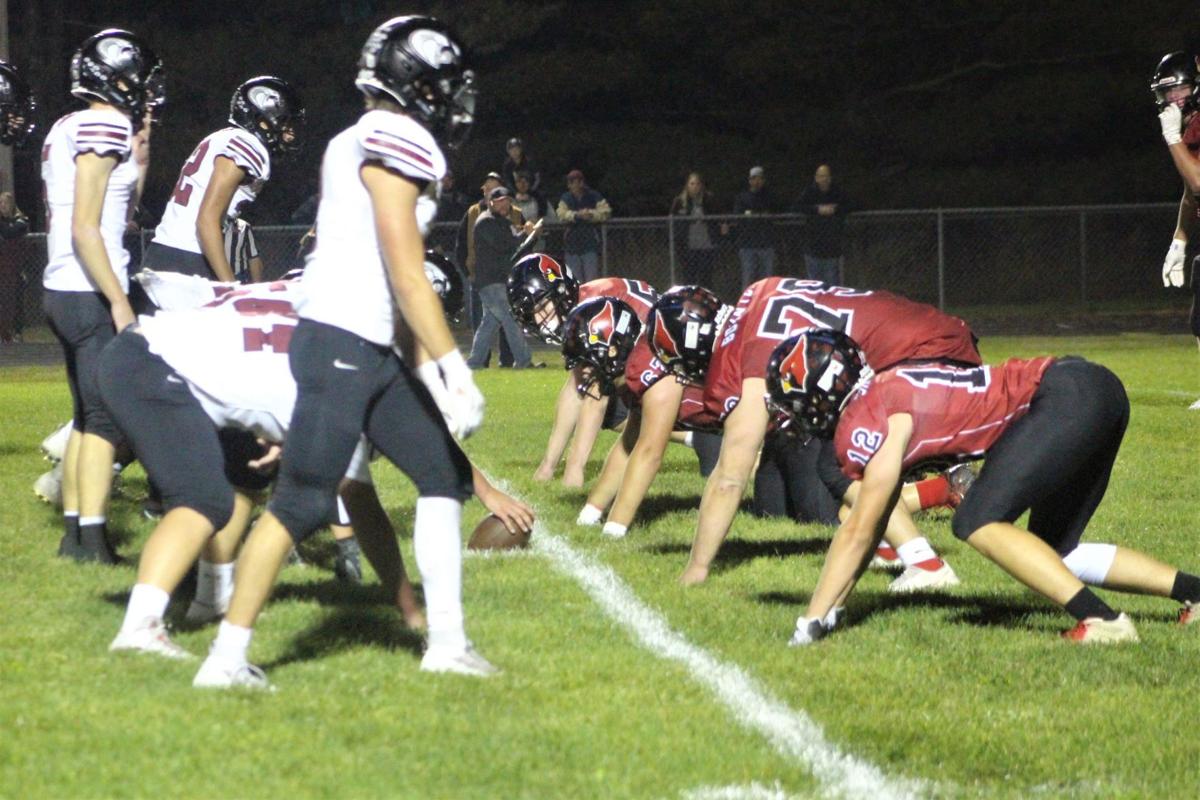 Lewiston-Altura's defensive line gets set before a play in the Cardinals' home loss on Friday.

However, a couple key plays were the exception to that, and those few mistakes ended up outweighing the many more positives.

“We made some plays, didn’t make others, and that was the name of the game,” Olson said.

The Cardinals lost their homecoming game 43-42 to Southeast White rival Triton in a game that went into two overtime periods.

Despite the high final score, it took a bit of time for both offenses to get rolling at full speed, with L-A leading 7-0 at the end of the first quarter.

Lewiston-Altura forced the Cobras to punt on the game’s opening drive, then the Cardinals chewed clock as they moved down the field with their ground-and-pound offense.

At 4-minutes, 19-seconds, the Cardinals offensive line picked up a pair of pancake blocks, which left nothing but green grass in front of senior running back Collin Bonow, who rushed 35 yards for a touchdown to take a 7-0 lead.

After the low-scoring first quarter, the second offered more in the way of offense.

Triton got on the board for the first time a minute and a half into the period, with quarterback Owen Petersohn rushing for a 10-yard score to tie the game at 7.

The Cardinals moved into the red zone on their next drive, though quarterback Caleb Mueller threw an interception that the Cobras returned out to the 10-yard line at 7:15. Just a few plays later, Triton coughed up a fumble at the 19-yard line that L-A senior Mason Sikkink jumped on to give the Cardinals the ball in the red zone once again.

This time they capitalized, with Bonow rushing for his second score of the day on a four-yard run to go ahead 14-7 with 3:14 remaining until halftime.

Though Triton did not have much time, the Cobras moved quickly down the field anyway, scoring on a 14-yard scamper by senior running back Braxton Munnikhuysen to tie the game at 14-14 with 52 seconds left until the break.

L-A utilized its two timeouts effectively while also moving down the field with ease, setting up a 38-yard field goal as time wound down, though the attempt went wide left and the score stayed 14-14 at halftime.

It did not take long for that tie to be broken when play resumed, as Bonow scored for the third time on a 57-yard rush less than a minute into the half for a 21-14 Cardinals lead at 11:05.

The senior runner has been the workhorse for the Cardinals all season, running over the first defender he meets and using speed to beat the rest as a dual-threat back.

“We always tell our guys it’s the hardest thing to do in football, tackle a guy that’s in the open field. When you get Collin in the open field it’s really tough for teams to bring him down,” Olson said.

Triton chewed six minutes off the clock on its ensuing drive, coming away with seven more points when Munnikhuysen punched in an 11-yard score to tie the game at 21 with 4:56 left in the third.

After Bonow had terrorized the Cobras on sweeps and off-tackle powers for the first three quarters, Olson had an ace up his sleeve that he unleashed early in the fourth quarter — senior fullback Jackson Koverman.

Koverman caught a screen pass and had a trio of important rushes, capping off the drive with a 15-yard rushing score at 11:13 that Olson saw coming before the ball had even been snapped.

“We noticed their linebackers had widened out over the tackles instead of over the guards where they’re typically supposed to be, and we knew as soon as I saw them move, we’re going to trap and Jackson’s going to go untouched for 15 and sure enough he did,” Olson said.

On the ensuing extra point, Triton blocked the kick, and Lewiston-Altura’s lead was only six points at 27-21.

Both teams stalled on their next few drives, and Triton took over at the 36-yard line with 3:18 remaining in the game still trailing by six points.

Much like at the end of the first half, the Cobras quickly moved down the field and Munnikhuysen scored on a three-yard rush for his third touchdown of the game with 54 seconds remaining. Triton’s extra point attempt went wide right, squandering their chance to take the lead with less than a minute remaining, and keeping the game knotted at 27-27.

Lewiston-Altura moved down the field in chunks, and it seemed like the Cardinals were putting themselves in prime position for a game-winning field goal as time expired. With 22 seconds left, Mueller ran a bootleg option and made a smart decision to tuck the ball and scramble, though the ball was punched out of his hands at the 14-yard line and the Cobras recovered to thwart L-A’s attempt to win the game in regulation as the game went to overtime tied 27-27.

Both teams were clearly out of gas in overtime.

Munnikhuysen scored a 10-yard rushing touchdown on the first play of the period, and Triton executed a fake field goal for a two-point conversion to go ahead 35-27.

Bonow responded with a first-play touchdown rush of his own, and Mueller tucked another bootleg on the two-point conversion, this time bowling over a pair of Cobra defenders to reach the end zone for a 35-35 tie to head to a second overtime.

With the Cardinals starting on offense, Bonow scored his fifth touchdown of the game on a 6-yard rush on the second play and L-A went up 42-35 after an extra point kick went through the uprights.

Triton’s Owen Garness scored his only touchdown of the night on the Cobras’ second play, punching in a four-yard run for a 42-41 score. When Triton called a timeout following the touchdown, it was clear the Cobras intended to go for two yet again.

The Cobras attempted a similar bootleg play to the one that L-A had success with, and Triton’s design worked as well, with Petersohn charging into the endzone to seal the 43-42 victory.

Bonow was the game’s leading rusher, totaling 218 yards and five touchdowns on 19 carries. Koverman added 101 yards and a score on 16 carries.

Munnikhuysen led the Cobras’ ground game with 167 yards and four touchdowns on 25 rushes.

Neither team went to the air much, with Mueller going 3-for-6 for 33 yards and an interception and Petersohn going 4-for-7 for 77 yards.

The one-point win was far from the first close game that Triton has played in so far this season, losing a 21-20 game to Chatfield in Week 2, while winning 31-29 against Pine Island and 22-20 over St. Charles in the past two weeks.

Now that the Cardinals have had such a roller coaster game under their belt, Olson hopes his squad can apply what it learned the next time the stakes are high.

“It’s good for them to be in that pressure situation where they have to make some plays when the game’s on the line,” Olson said.

Lewiston-Altura senior Jaydon Boynton forces a Triton lineman into a holding penalty while making a tackle in the Cardinals' 43-42 double-overtime loss on Friday.

Lewiston-Altura's defensive line gets set before a play in the Cardinals' home loss on Friday.