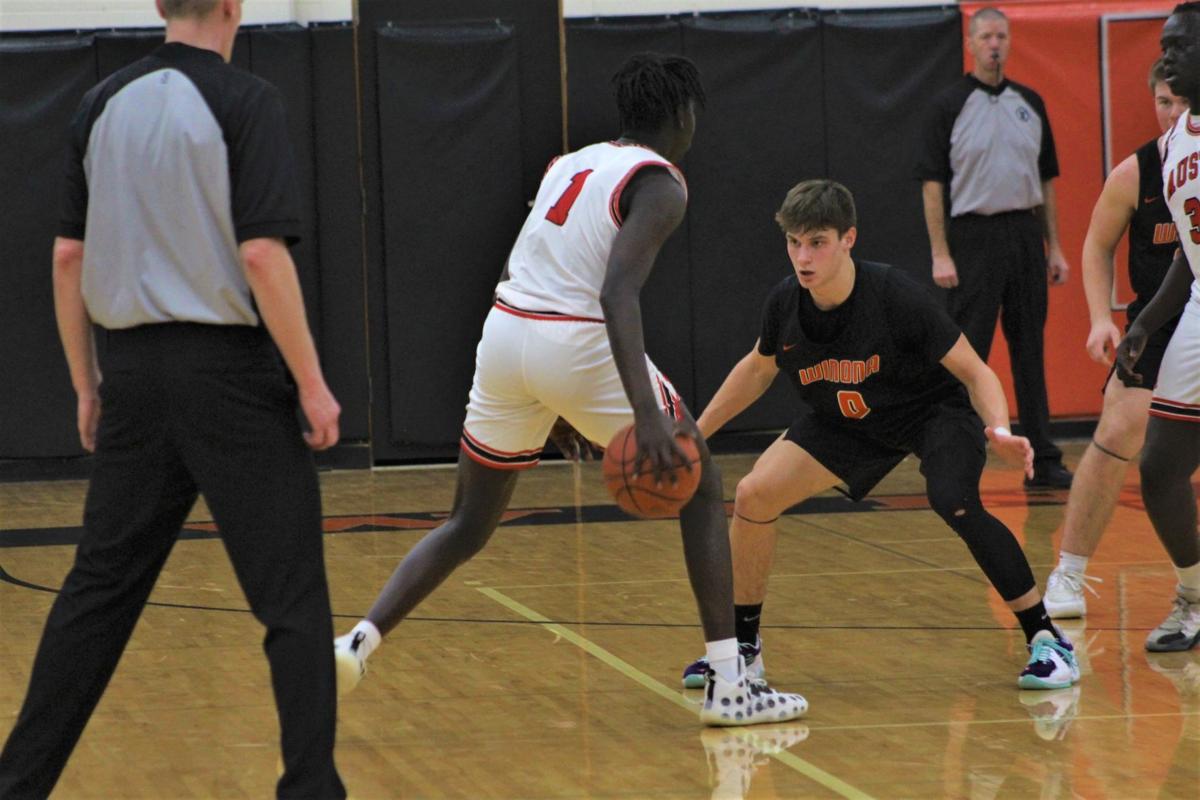 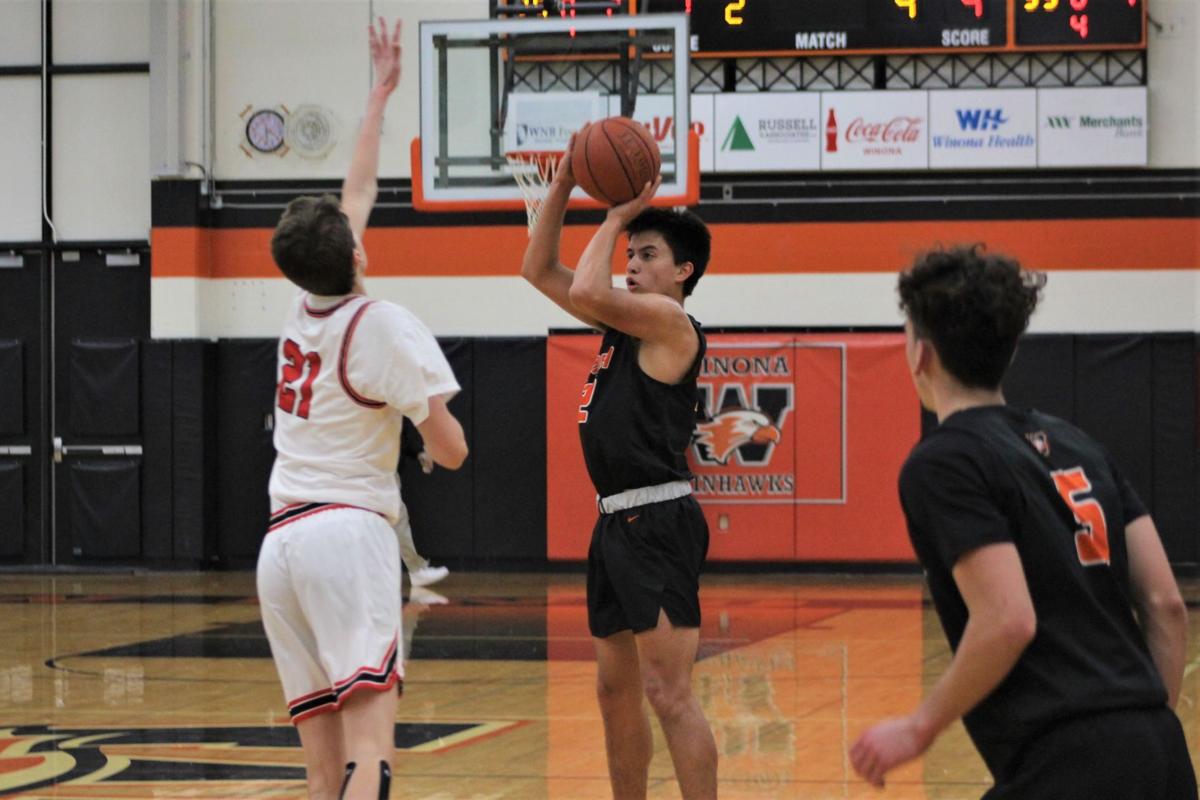 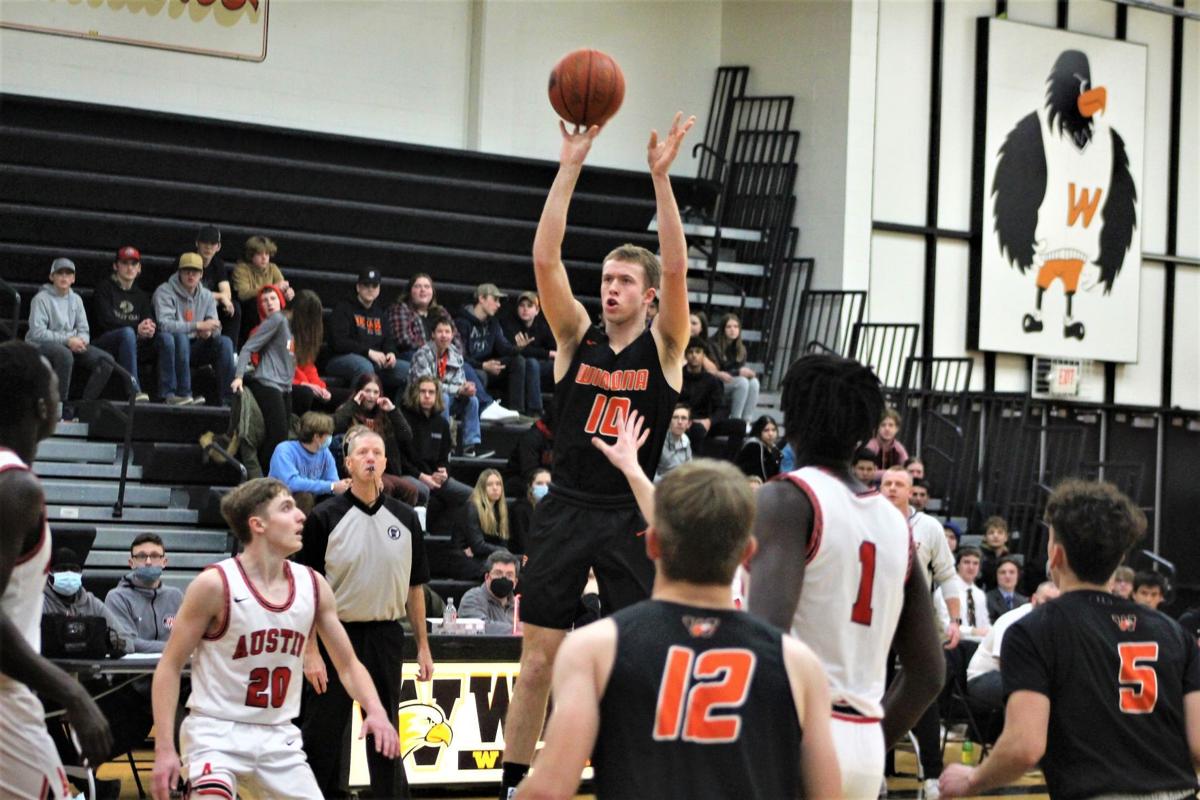 Winona's Jasper Hedin rises up in traffic for a shot in the Winhawks' 55-48 loss against Austin on Tuesday. 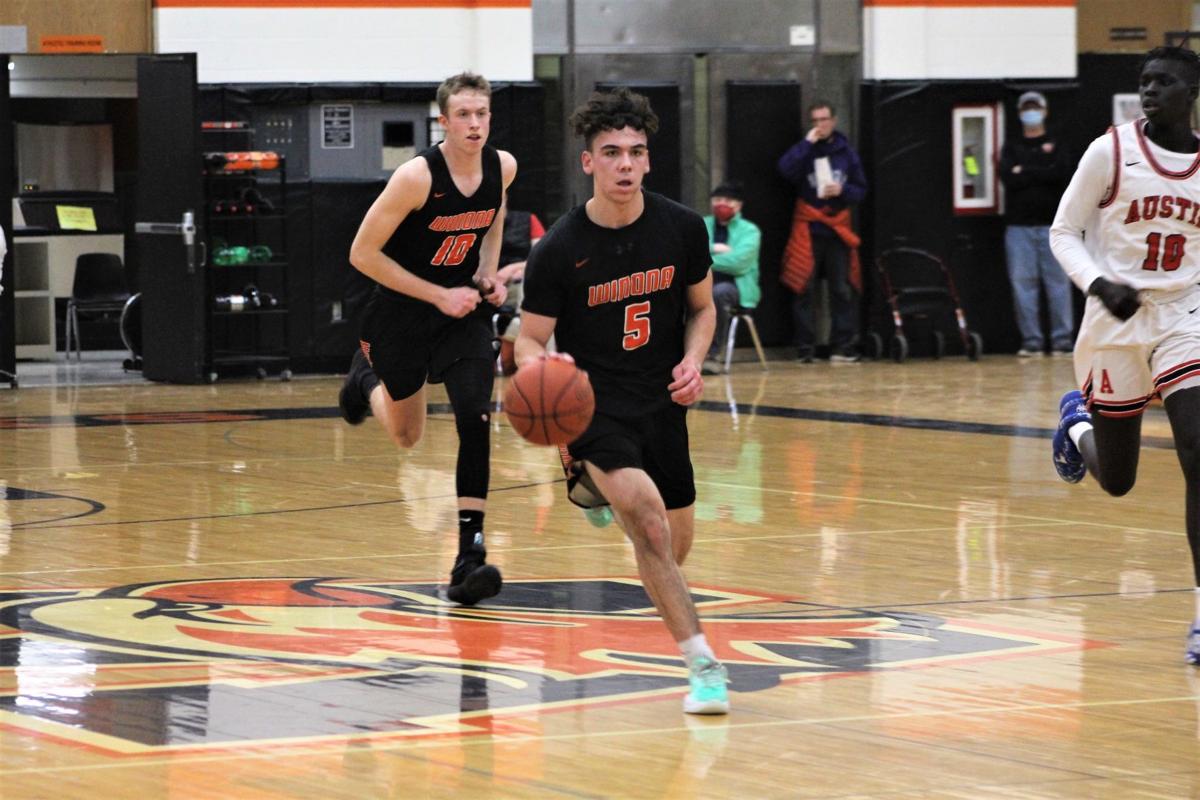 Shane Scharmach, center, brings the ball upcourt for the Winhawks in the team's Tuesday night los against Austin.

Over the last decade, Austin’s boys basketball team has had Winona’s number.

Since the Winhawks won three meetings between the teams during the 2010-11 season, the Packers had rattled off 22 straight wins in the series heading into the two squads’ Tuesday night Big 9 Conference matchup at WSHS.

While it looked like Winona might finally break the streak in the first half, Austin played a strong second half to make it 23 in a row with a 55-48 victory.

Despite a strong half of play, head coach Kyle Martin knows that his team needs to be consistent for the full game to win against an opponent that has dominated the series recently.

“It’s going to take every minute, every possession, not turning the ball over, to win these type of games,” Martin said.

Austin (5-6, 4-3) scored a couple quick buckets at the start for a 5-2 lead, but the Packers offense went dormant for nearly seven minutes as the Winhawks (4-4, 3-3) played lock-down defense. In that time, Austin played strong defense as well, and Winona was only able to go on a 13-3 run for a 15-8 lead at eight-minutes, 48-seconds.

The tables turned from there, as Austin went on an 11-3 scoring streak to go ahead 19-18 for its first lead since the opening minutes, capped off by a layup by Buai Duop.

Winona was able to jump back ahead with a pair of free throws by senior Marcus Winter to take a 20-19 lead into halftime.

As has been the case in many of the team’s games this year, the Winhawks came out cold at the start of the second half.

Austin rattled off a 13-0 run in the first three minutes, and Winona did not score its first point until a Jasper Hedin layup at 13:57 cut the score to 32-22.

The Winhawks were not rattled by the slow start, though, and they fought back over the next three minutes as a layup by Shane Scharmach cut the deficit to 35-31 at 10:55.

For Martin, that stretch says a lot about his team’s mental fortitude.

“One of the hardest working teams I’ve ever coached. They’re able to reset, able to gather themselves,” Martin said.

After the two teams traded streaks for the first 25 minutes of the game, the remainder of the game was a back-and-forth battle.

From the 10:55 mark until there were just 48 seconds on the clock, neither team scored on more than two possessions in a row, and Winona trailed 51-48 with the game within its grasp.

In the final 48 seconds, Austin hit four free throws while holding Winona scoreless to close out the seven-point victory.

While the Winhawks ran just a six-man rotation in the game, Martin did not think his team was too tired by the end of the contest. However, he admits his players would have been more well-rested if they took better care of the ball.

“We can play a lot better and save a bit more energy if we’re not turning the ball over so many times, hustling back, playing a lot of transition defense. We’re going to cut that down and we’re going to come back better,” Martin said.

Winona’s Hedin led all scorers in the game with 21 points and 10 rebounds for a double-double, and Winter also hit double digits for the Winhawks with 10 points, adding eight rebounds.

Austin was led by a 19-point night from Cham Okey, while Victor Idris added 17 points.

The Winhawks celebrate after a buzzer-beating shot

Charlie VandeBerg dribbles along the sideline

Winona sideline huddle during a timeout

The Winhawks celebrate after a buzzer-beating shot #2

Winona’s boys hockey team picked up its second win of the season in a key rivalry game, beating Big 9 Conference foe Red Wing 4-3 on the road …

Rushford-Peterson’s boys basketball team picked up another strong win on Thursday night, hitting the road and beating Chatfield 69-55 for only…

When Rushford-Peterson’s girls basketball team hosted Chatfield on Thursday night, the Gophers were the favorites despite R-P’s home court advantage.

Winona’s boys basketball team started off both halves with energy in a home game against Big 9 rival Owatonna on Thursday, but in both halves …

When undefeated Lewiston-Altura traveled to Winona to face off against winless Cotter, on paper it seemed like the Cardinals were set to troun…

Winona's Jasper Hedin rises up in traffic for a shot in the Winhawks' 55-48 loss against Austin on Tuesday.

Shane Scharmach, center, brings the ball upcourt for the Winhawks in the team's Tuesday night los against Austin.