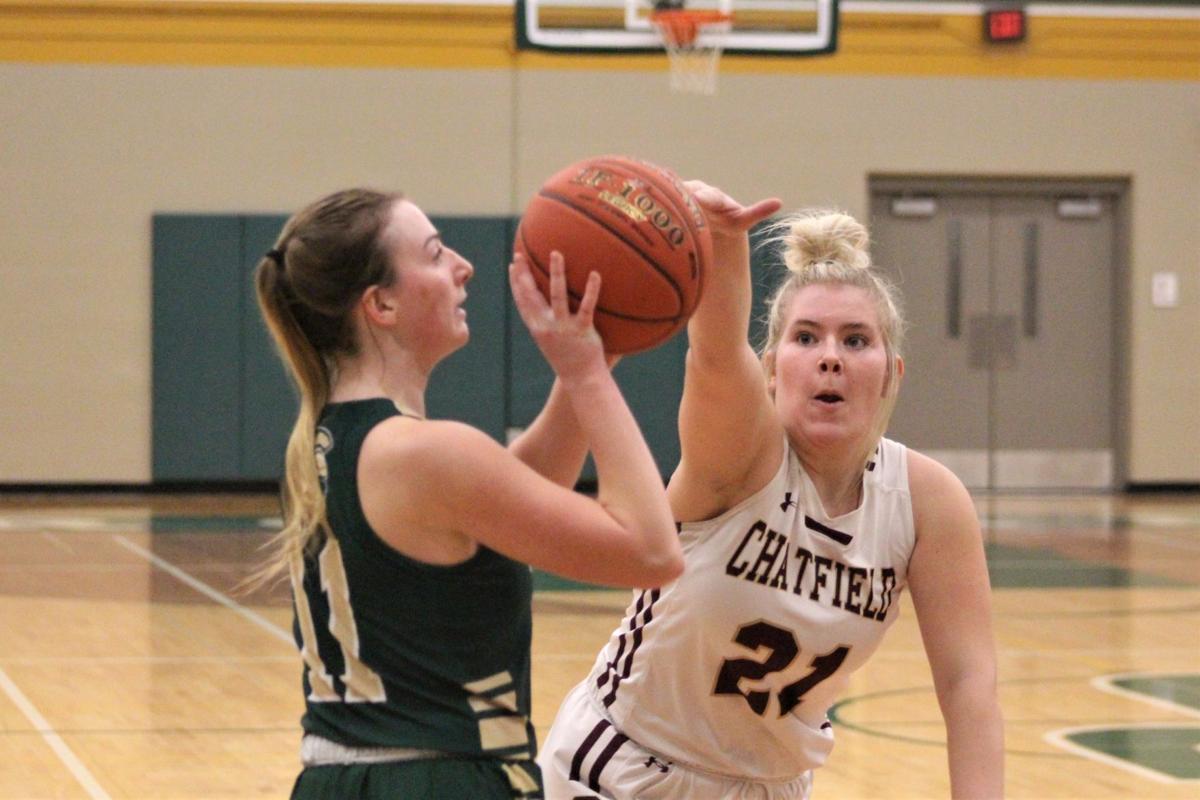 Chatfield senior Peyton Berg, right, goes for a block on R-P's Hannah Ronnenberg. Berg led all scorers with 24 points in the 76-57 Chatfield win. 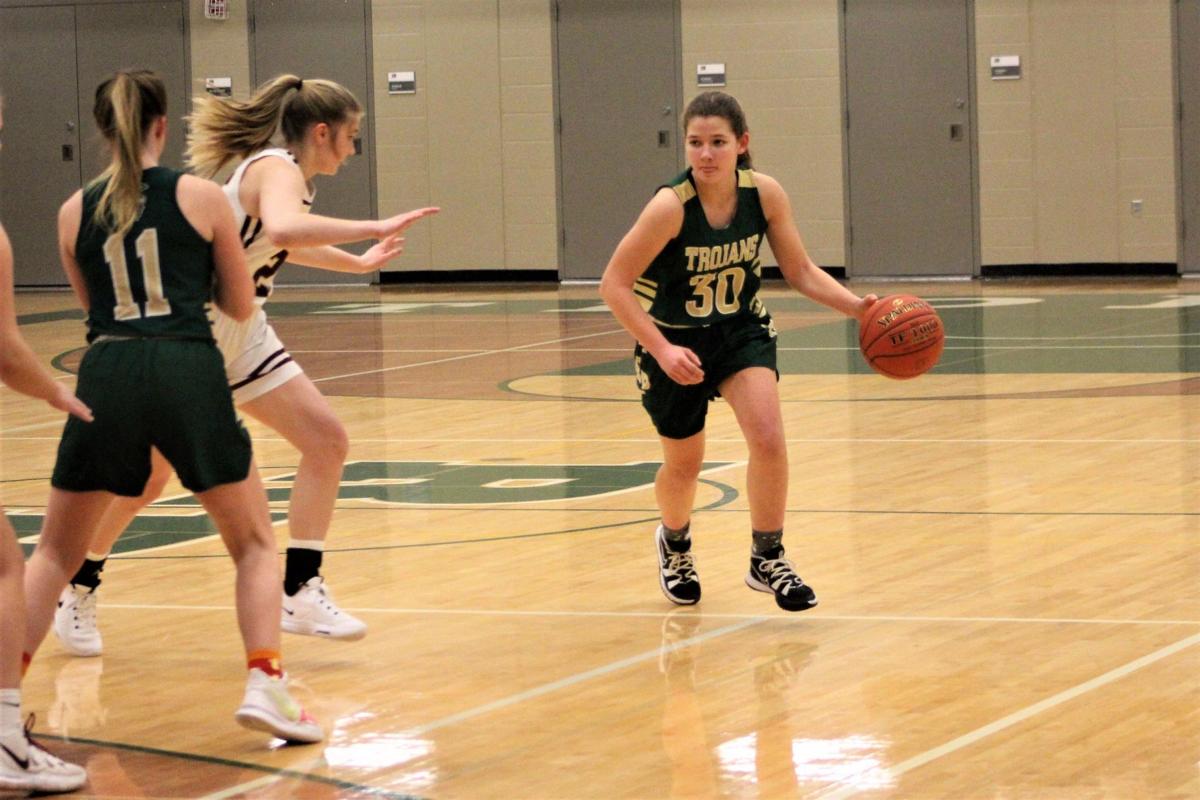 Rushford-Peterson sophomore Ellie Ekern led the Trojans with 18 points in their 76-57 loss to Chatfield on Thursday. 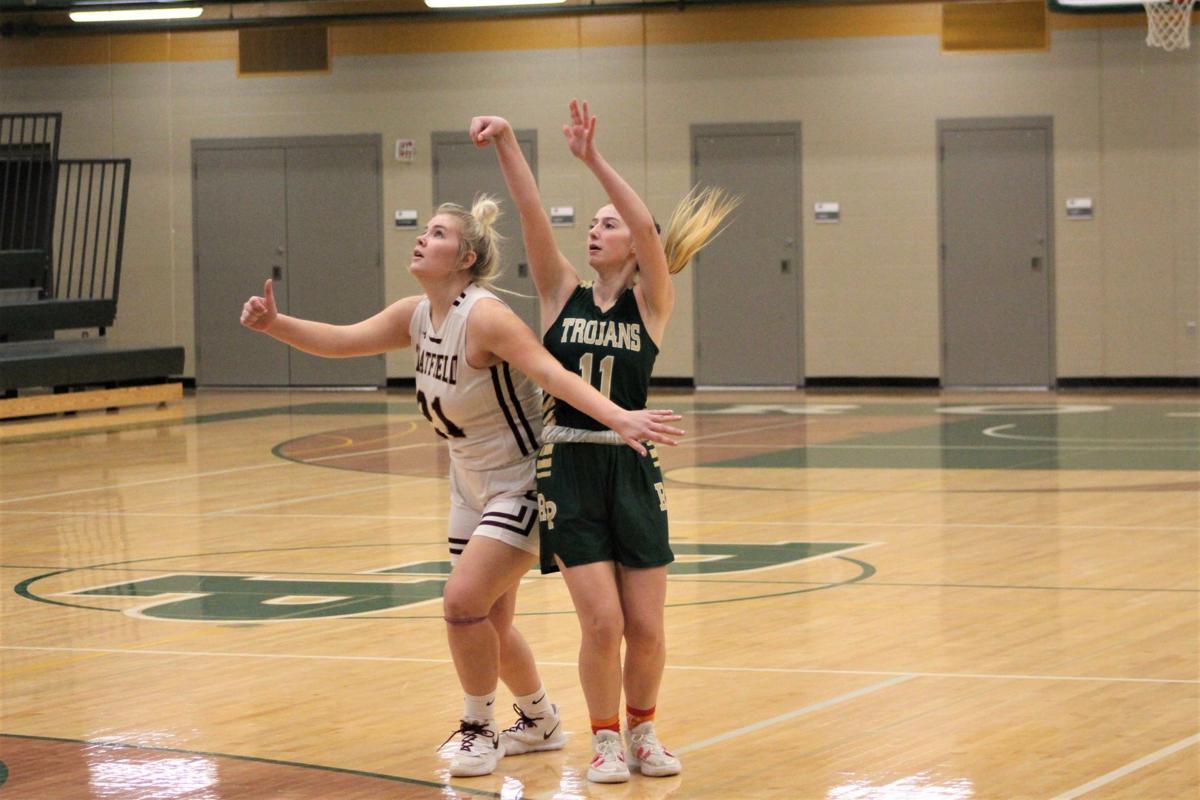 Trojans junior Hannah Ronnenberg, right, follows through on a three-point attempt as she hit three triples in Thursday's 76-57 loss to Chatfield.

When Rushford-Peterson’s girls basketball team hosted Chatfield on Thursday night, the Gophers were the favorites despite R-P’s home court advantage.

Chatfield came into the game with a 10-4 overall mark that ranks among the best in the Three Rivers Conference, while the Trojans sat in the middle of the pack at 6-6. Sure enough, the Gophers ended up with a convincing 76-57 victory.

However Rushford-Peterson was not intimidated by the difference in records, and the Trojans started the game red hot.

After Chatfield won the opening tip, R-P sophomore Ellie Ekern quickly stole the ball and was fouled as she sank a layup. Following the free throw, the Trojans had a quick three-point lead.

Following an empty Chatfield possession, the Trojans doubled their lead when junior Hannah Ronnenberg hit a three-pointer for a 6-0 lead less than a minute into the game.

About a minute later, Ronnenberg hit another triple for a 9-0 score that forced the Gophers to call a timeout at 16-minutes, 23-seconds.

In R-P’s prior two losses the Trojans had started slowly, so head coach Joe Hatch was glad to see his players come out of the gate with a bang.

“It was good for us to get a good start, hopefully we can build on that moving forward, starting with confidence,” Hatch said.

The Gophers settled down in their timeout and started playing the way they have all year, going on a 20-2 run over the next seven minutes for a 20-11 score at 9:53.

That lead continued to expand for the rest of the half, and at the break, Chatfield led 36-20.

After their hot start, the Trojans were inconsistent on both ends of the floor, but it was not anything that was particularly surprising for the R-P coaching staff.

“We struggled after that, but we’re playing a really good team, so you’re going to come back to reality a little bit,” Hatch said.

For the first 11 minutes of the second half, the two teams traded buckets one or two at a time, and by the 7:16 mark Chatfield’s lead had only increased by one point up to 17 at 55-38.

The Gophers barely bumped up their lead again in the closing minutes, increasing their tally by two points for a 19-point margin of victory at the final buzzer.

After being outscored by 16 in the first half, the Trojans hung tough with a 40-37 second half in which both team’s starters played the majority of the minutes.

“We got a lot of good looks, but we had a hard time finishing around the rim. I was happy with our shot selection overall,” he said.

Ekern was R-P’s leading scorer with 18 points, with junior Kaylee Ruberg next with 15 points and Ronnenberg also hitting double digits with 11 points, including a trio of three-pointers.

Only a sophomore, Ekern has been progressing throughout the season thanks to her dedication. Hatch says she stops by school early multiple times per week to get some extra shots in before heading to class.

As a result of all her hard work, Hatch says he has been putting more and more on her plate. Even if she may not feel she is ready to take those steps forward, Hatch can tell she is and her performance Thursday proved his point.

“I’m pretty hard on her a lot of times in the games, trying to make her do more because I’m confident in her ability. Sometimes she gets mad at me for that, but I’ve got to keep challenging her and keep having her improve,” Hatch said.

Emarie Jacobson shoots a layup in the lane

Sera Speltz goes up for a layup

Ellie Ekern with the fadeaway jumper over Ava Killian

Brie Papenfuss with the layup

Megan Morgan drives to the basket

Ellie Ekern with a contested layup

Kaylee Ruberg gets open for a layup

Ellie Ekern with the breakaway layup

R-P and Cotter battle for a rebound

Ellie Glodowski with the floater in the lane

Kallie Eide defended by Madison Hazelton on the inbounds play

Winona’s boys hockey team picked up its second win of the season in a key rivalry game, beating Big 9 Conference foe Red Wing 4-3 on the road …

Rushford-Peterson’s boys basketball team picked up another strong win on Thursday night, hitting the road and beating Chatfield 69-55 for only…

Over the last decade, Austin’s boys basketball team has had Winona’s number.

Winona’s boys basketball team started off both halves with energy in a home game against Big 9 rival Owatonna on Thursday, but in both halves …

When undefeated Lewiston-Altura traveled to Winona to face off against winless Cotter, on paper it seemed like the Cardinals were set to troun…

Chatfield senior Peyton Berg, right, goes for a block on R-P's Hannah Ronnenberg. Berg led all scorers with 24 points in the 76-57 Chatfield win.

Rushford-Peterson sophomore Ellie Ekern led the Trojans with 18 points in their 76-57 loss to Chatfield on Thursday.

Trojans junior Hannah Ronnenberg, right, follows through on a three-point attempt as she hit three triples in Thursday's 76-57 loss to Chatfield.