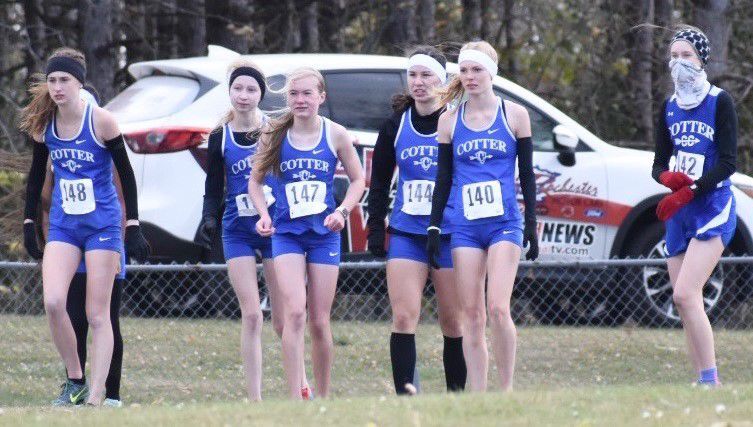 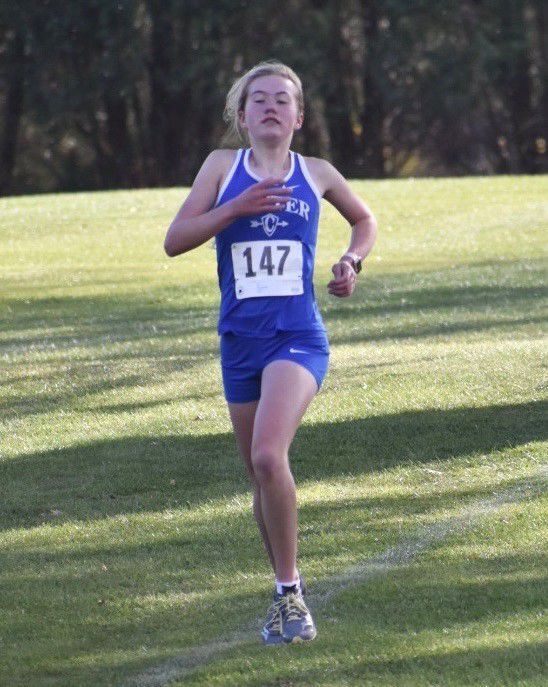 Cotter eighth-grader Sonja Semling led the Ramblers with a fifth-place finish on Friday.

Rightfully so, as the Pings set records and won multiple state titles during their time at Cotter. But when the Pings moved away a second time — this time for good — in the summer of 2019, many around the cross country community thought that would be it for Cotter’s success.

Little did they know a new group of Ramblers were hungry and ready to begin their own legacy.

They did just that on Friday, as they braved 20-30 mph winds and chilly temperatures to cap off a perfect season with a dominating performance at the MSHSL Section 1A meet at Northern Hills Golf Course.

Zumbrota-Mazeppa/Kenyon-Wanamingo sophomore Natasha Sortland won the race with a time of 19 minutes and 8.4 seconds.

It was a proud moment for coach Mike Costello to see the group succeed.

“It was cool to see this group do it on their own and take that next step,” Costello said. “And I think they’ve really developed a culture within the group that is a great example for the younger kids. And I think that will really be an inspiration to our seventh-, eighth- and ninth-graders.

“... But I’m just really proud of them. They really handled coming in and out of practice with masks, triangular meets instead of some of the big meets we’re used to. Just a lot of tricky stuff to navigate, and I thought they really did it well. I’m just very happy that they’re rewarded for their efforts.”

With no fall state tournaments in Minnesota this year, the Ramblers knew this was going to be their final race of the season and they left it all on the course. They had a number of inspiring performances, whether it was senior Aubrey Williams battling through an illness — not COVID-19 related — to finish 15th (21:19.4) or junior Ellie Glodowski, who collapsed at the finish line after placing 19th (21:37.3).

“It feels fantastic to be section champions,” Williams said. “In a way, it’s even more memorable this year because it represents a culmination of perseverance from an extraordinary group of girls. Our team always found a way to succeed this year despite so much uncertainty. This will truly be a season to remember.”

After finishing 30th last year at the section meet as a seventh-grader, Semling improved 25 spots, placing fifth (20:23.5) to finish off a stellar season that saw her win a pair of meets and be crowned the Three Rivers Conference champion.

“The relationship between our runners is so strong, it makes every run memorable,” Semling said. “Even with injuries on our team and unexpected setbacks, we still worked hard as a group and pushed through in the end to reach our ultimate goal.”

Semling wasn’t the only eighth-grader who drastically improved from a year ago, as fellow eighth-grader Hazel Freyre placed 23rd (22:03.6) after finishing 98th last season at the same race. The thought of Semling and Freyre being around for another four years is a scary thought for opponents. The baton has been passed down to them and the fact, too, that they had a core of upperclassmen in Ebertowski, Williams and Glodowski is a major factor moving forward.

“It was a really nice kind of handoff from older kids to younger kids,” Costello said. “That’s one of the cool things in cross country is you get seven through 12 practicing together — at least for us, anyway — and you can kind of see the next generation coming in. We had a really good group of junior high boys and girls this that made it fun.

“Hazel and Ellie, the improvement that they showed was pretty remarkable. As well as Sonja.”

Although, it’s bittersweet that the Ramblers won’t get the chance at state, the fact that they had this opportunity is enough for them.

“To be honest, we’re just really happy we had a season period,” Costello said. “Yes, it would have been fun to keep moving. But I think given everything, like La Crescent was shut down and Winona was suspended for a while and all that. So looking around at what happened we felt pretty fortunate to have what we had.”

The bond, too, was one that made this unprecedented season a truly memorable one.

“If I could sum up the season in one word, I’d say proud, because of all the dedication and the hard work every single lady put in,” Glodowski said. “We aren’t just runners or teammates — we are family.”

Brian Semling contributed to this report

Why is there still so much doubt surrounding the Atlanta Hawks?

Cotter eighth-grader Sonja Semling led the Ramblers with a fifth-place finish on Friday.