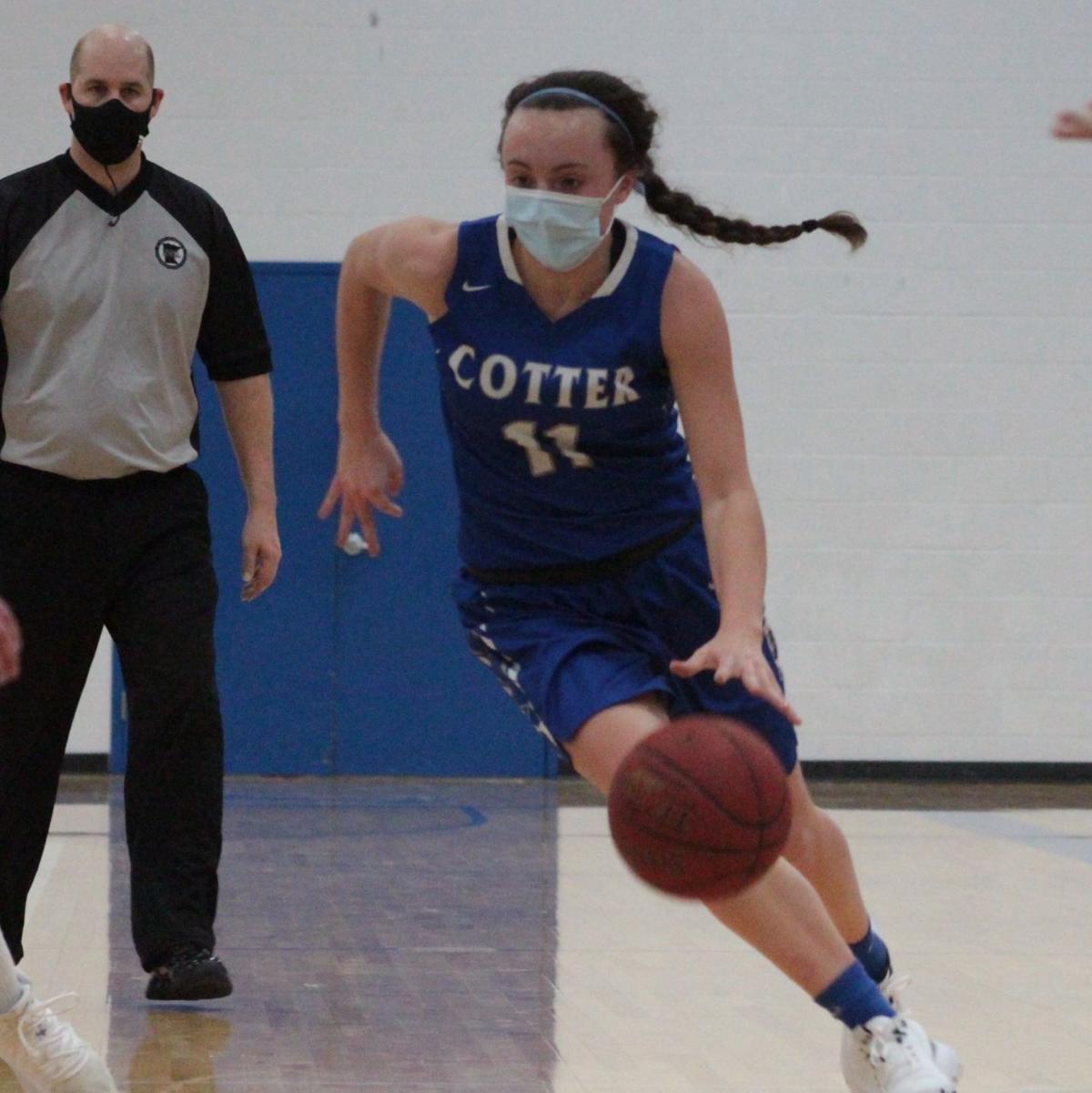 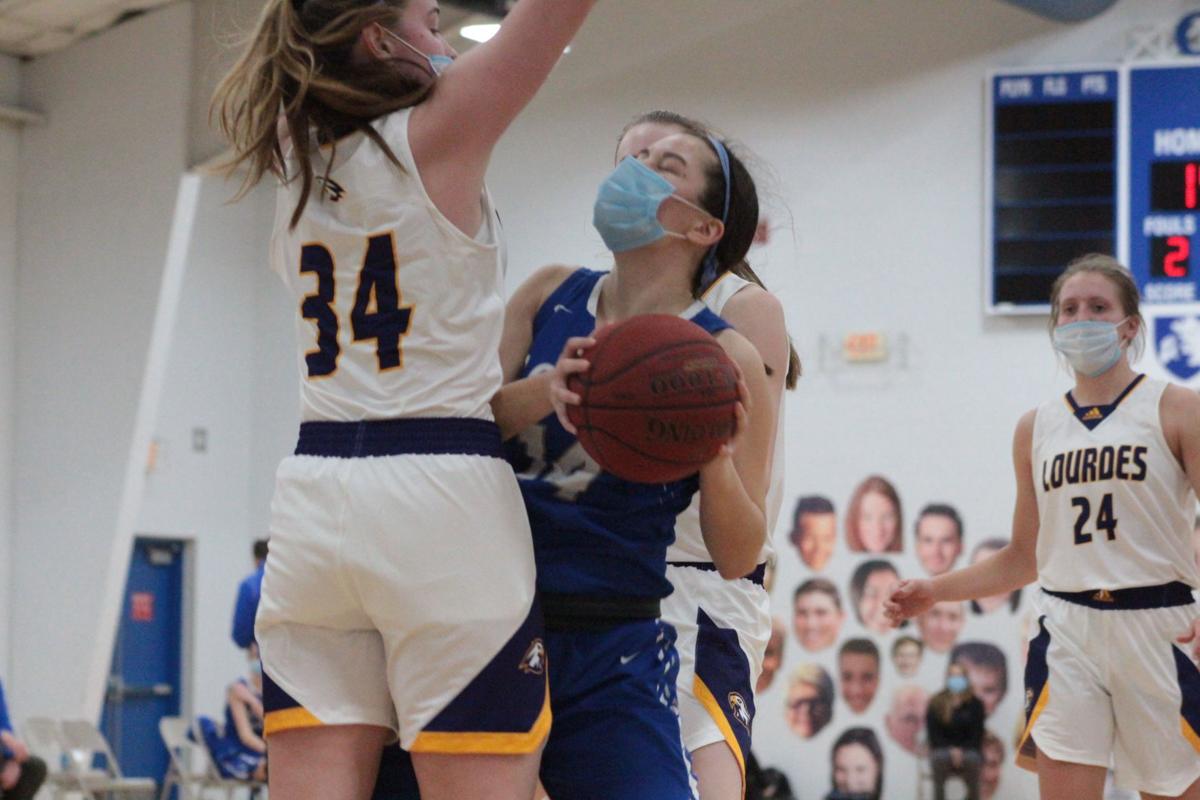 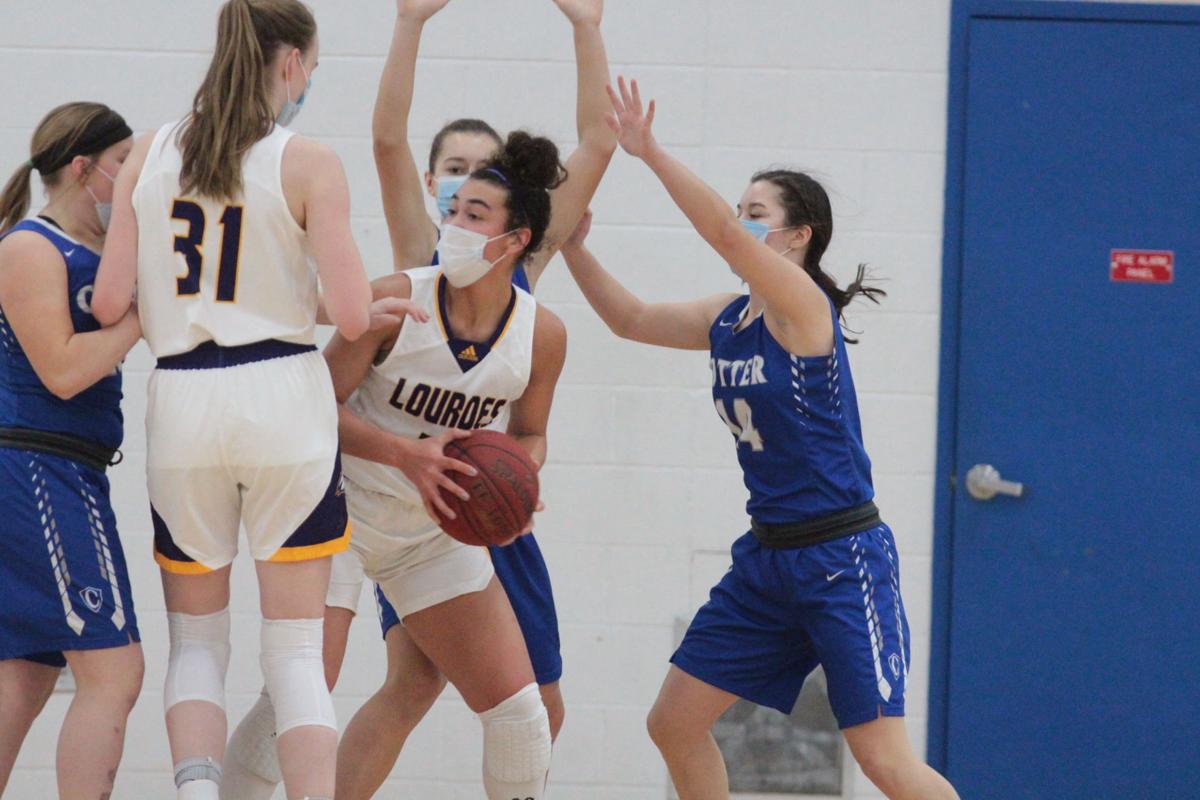 For years, the Cotter girls basketball team has hung their hat on their ability to play defense.

It looks like this year's team will carry on that tradition and then some.

And even though the Ramblers dropped their opener 55-48 to Rochester Lourdes Saturday at a spectator-less John Nett Recreation Center, they showed plenty of grit and fight, nearly knocking off their section rival despite only having eight available players due to injuries and illness. That included not having all-conference performer Sofia Sandcork.

Any coach will tell you that there is no such thing as moral victories, but there was a lot on Saturday for coach Pat Bowlin to proud of.

"I feel great about (the game)," Bowlin said. "Truthfully, when we fell behind 13 I was like, 'oh boy, can we compete with these guys?' We kind of steadied the ship and obviously made a good run in the second half.

"... But the truth of the matter is we did not have one 5-on-5 scrimmage this week because we only had eight kids in practice the whole week and because of COVID you can't bring kids up from JV. We did what we could but it was far from ideal. But I tell you what, it looked like we were practicing 5-on-5 the way we played."

Lourdes — which was coming off a 60-18 defeat of Kenyon-Wanamingo on Friday — scored 26 of the game's first 39 points. But the Ramblers refused to go down quietly.

Fueled by their bench — a group that was a question mark coming in — the Ramblers finished the half on a 9-3 run to make it 29-22 at the intermission. The bench — led by Ellie Glodowski's eight points — combined for 13 of the Ramblers 22 first half points.

"We were really worried about our bench coming in," Bowlin said. "The shocking thing is at halftime, they were one of the reasons we were still within striking range."

All-conference juniors Megan Morgan and Olivia Gardner combined for just two points in the first half. At halftime, Bowlin challenged his veterans to be more aggressive, instead of settling for contested jumpers like they did in the first half.

They took their coach's word to heart, making a conscience effort to attack the paint in the second half. It worked, as the two combined for 20 in the second half with Morgan finishing with a team-high 14 points, while Gardner pitched in eight.

"We kind of lost our way there for a little bit," Bowlin said. "But I really feel like Olivia and Megan really came alive in the second half. That's what we needed. We just need those two attacking the basket."

But it looked like Lourdes was about to once again run away with it when they brought the lead back up to 10 at 46-36 after the Ramblers had cut it to 38-35. But the Ramblers responded with an 8-0 run capped off by a bucket by Ellie Macal, who finished with 11 points, 10 rebounds and seems prime to have a great season this year.

"I really thought Ellie played a good game all the way throughout," Bowlin said. "She's really ready for a great year. She's worked so hard on her shot and she's a good shooter right now too. And a great thing too is she made a lot of great decisions today."

It felt the Ramblers had the momentum, but the Eagles just simply found a way. They knocked down a 3 with 72 seconds left that made it 53-46.

The Ramblers will look to rebound 7:15 p.m. Tuesday when they host Lewiston-Altura.

"We were obviously a little short-handed today," Bowlin said. "But I couldn't be more proud of these eight kids. They played fantastic today."

Elsewhere, the Winona/Cotter gymnastics team celebrated their seniors in style with a dominating performance against Red Wing on Saturday's Senior Day.

MABEL, Minn. — The Rushford-Peterson High School boys basketball team was able to bounce back from a tough loss against Caledonia on Tuesday w…

The Winona Senior High boys basketball team celebrated their eight seniors in style on Friday, as they handled Red Wing 63-42 on Senior Night …