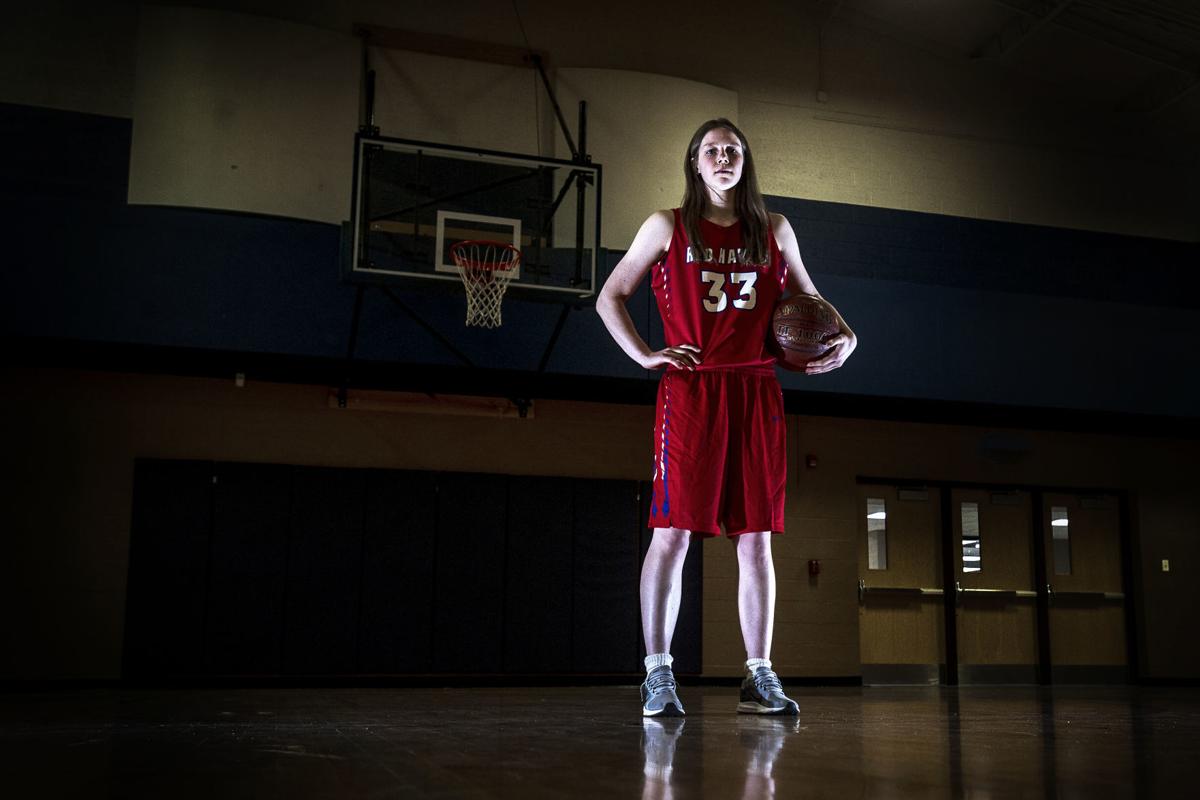 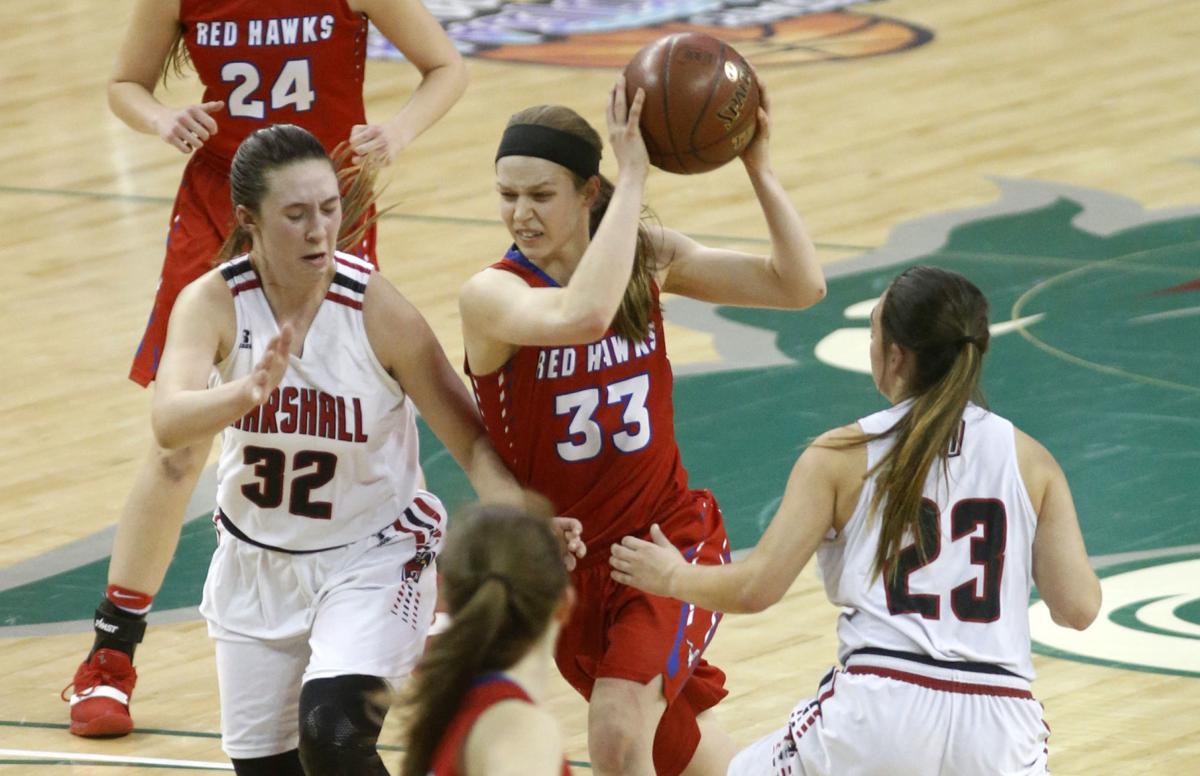 G-E-T senior Lexi Wagner looks for space on the way to the basket during the Red Hawks WIAA Division 3 state semifinal at the Resch Center in Green Bay. 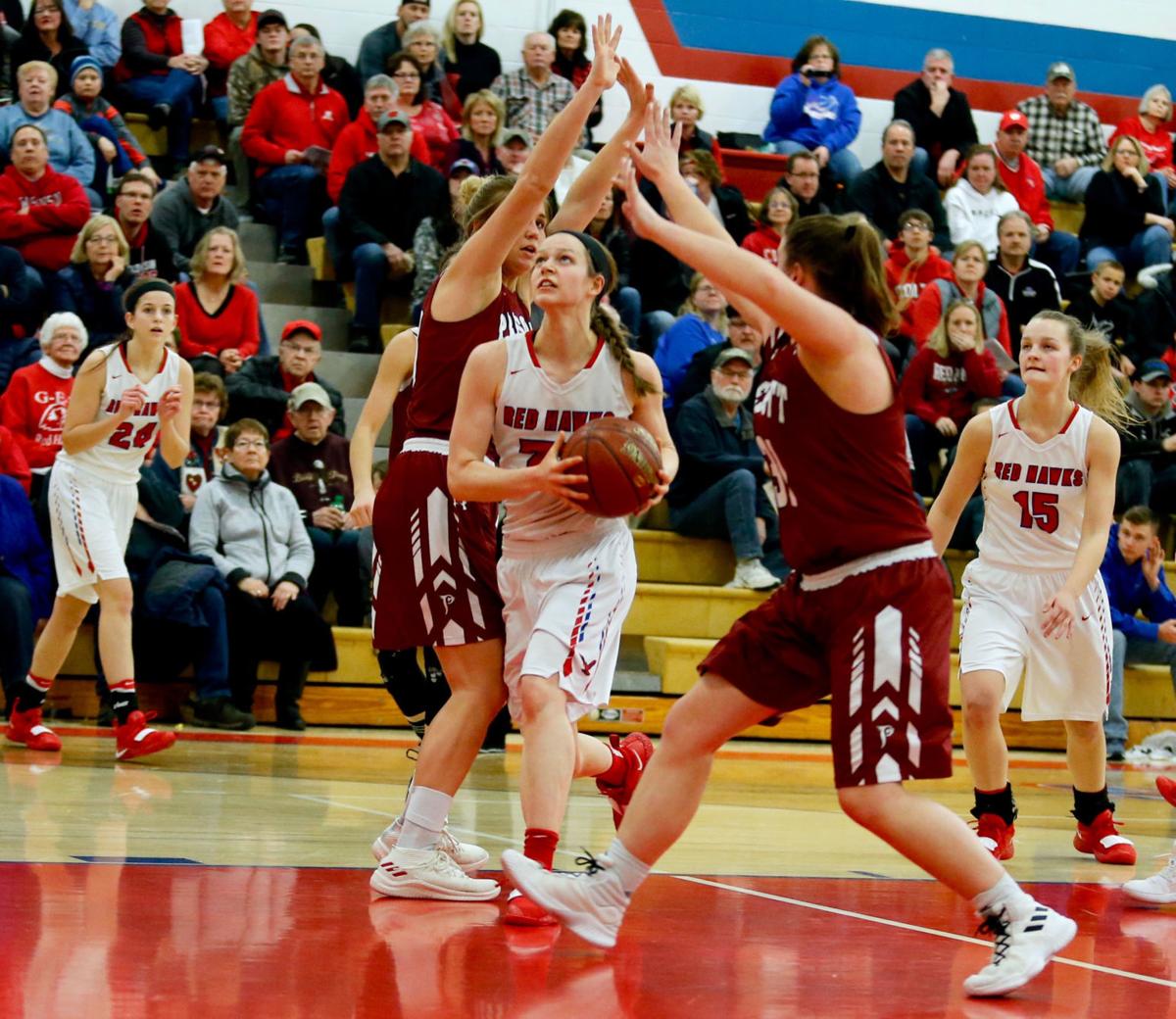 Gale-Ettrick-Trempealeau's Lexi Wagner (33) splits the defenders for a layup against Prescott.

This was Lexi Wagner’s last chance.

The senior guard had only one more to match what her brothers Tim and Nick had done and take Gale-Ettrick-Trempealeau to the WIAA State Basketball Tournament.

Wagner and the Red Hawks tore through everybody in their path on the way to a 24-3 record including a 19-game winning streak during the regular season and a berth in the Division 3 State semifinal at the Resch Center in Green Bay, Wis.

“That was something I had thought about since I was a freshman — since I was a fifth-grader and I watched Tim do it and when I was freshman and Nick did it,” Wagner said. “I remember the day Nick’s team won the section finals and I knew he was going to make it and lead his team. And I knew I had to do it one day. I had three years to do it. I just knew it was going to happen. After junior year, I knew it had to be this year. And we made it.”

Wagner was the driving force behind arguably the best four-year streak in G-E-T girls basketball history. In those four years, the Red Hawks went a combined 83-19 with trips to the sectional finals, regional finals, sectional semifinals, and state semifinals.

This season, she averaged 21.3 points per game while shooting 49.6 percent from the field and 40.8 percent from 3-point range. Along the way, Wagner set the school’s all-time career scoring record, breaking a mark that used to belong to her brother Nick — he scored 1,815 and she finished with 1,894. And for the second-consecutive year, Lexi Wagner is the Winona Daily News Girls Basketball Player of the Year.

“I don’t think that people understand how much Lexi looks up to Tim and Nick and wants to — I don’t want to say beat them — but how she continues to strive to stay as competitive as they were,” G-E-T coach Louis Hurd said. “I don’t want to call it a chip on her shoulder, but there is that bit about wanting to do better. I think they have kind of created that within their family. It’s good to have that competition and want to strive to be all that she can be.”

Wagner has come a long way from when she was so nervous before a sectional semifinal game against West Salem that she couldn’t find any of her gear even though it was all right there in her bag right in front of her.

“I was freaking out like, ‘I can’t find my shorts, where are they?’ and then my teammate was right next to me and would say, ‘Oh, they’re right here Lexi,’” she said. “‘Oh good. Where’s my ankle brace, I can’t find it?’ ‘It’s right here, Lexi.’ I was just really nervous. That was probably the most fun game in my career.”

She says she still gets just as nervous before games as she was that day four years ago, but she has gotten better at hiding it. And she was definitely prepared for whatever the game throws at her.

“We’ve asked her to be a scoring threat for us and to her credit she delivers pretty much day-in and day-out,” Hurd said. “She’s in the gym every morning shooting, she’s prepping herself, she wants to take those big shots and she wants to be in those big moments. And she’s had plenty of experience doing so.”

Wagner is proud that she and her teammates were able to take the Red Hawks to their first girls basketball state tournament. But she thinks it would have been better for the program to have had a history of deep postseason runs. She just wants G-E-T to be winners.

“You wish other people would have had the success before and had this fun of a year,”she said. “But hopefully we start something new and make people want to get there themselves just like my brothers and my dad when he was coaching. Hopefully they can continue the success that we started.”

The community was definitely watching. And maybe a new generation of Red Hawks girls will be inspired to work as hard as this group.

“I still get congratulations, I still get notes and letters from people and I’m sure that our girls have gotten the same,” Hurd said. “Our community support was probably the number one thing that I’ll remember from our run. So many people were happy and emotional about what we were able to accomplish. They were so proud of the girls. I think that is what our team, our staff is going to remember. Just how many people got behind us and believed in what we were doing.”

On her visit to Youngstown State, Wagner was looking out over the football field, looking at the city of Youngstown, Ohio and the Penguins assistant women’s basketball coach said to her “You know the reason you should come play here?” and she asked him why. “So we can beat Green Bay and Milwaukee and show them that we can get people from Wisconsin too.”

That sealed it for Wagner. She wants to help YSU beat the Wisconsin schools in the Horizon League with players from Wisconsin.

“They have (sophomore guard) Chelsea (Olson from Westby), they have Taylor Pettit (from Schofield) and a couple girls from my class from Wisconsin,” she said. “So it’s just going to be fun to beat Wisconsin teams with Wisconsin players. I decided that would be a lot of fun.”

Wagner is excited to play at the next level, with players with high basketball IQs. She wants to learn more about the game and play at a faster pace. Above everything else, she wants to learn.

She might have an idea of what she’s going to face at the next level with a pair of brothers with college basketball experience. Tim just finished his first year as an assistant coach at Bemidji State and Nick played for Indian Hills last season.

“They always tell me I need to get stronger, I need to get quicker,” she said. “When I work out with Nick or with Tim when he played, they would just give me small pieces of advice about becoming a better player.”

FOUR YEARS: G-E-T had a combined record of 83-19 in Wagner's four years on the varsity squad.

Watch for the Winona Daily News Boys Basketball Player of the Year in Sunday's paper or visit www.winonadailynews.com.

G-E-T senior Lexi Wagner looks for space on the way to the basket during the Red Hawks WIAA Division 3 state semifinal at the Resch Center in Green Bay.

Gale-Ettrick-Trempealeau's Lexi Wagner (33) splits the defenders for a layup against Prescott.