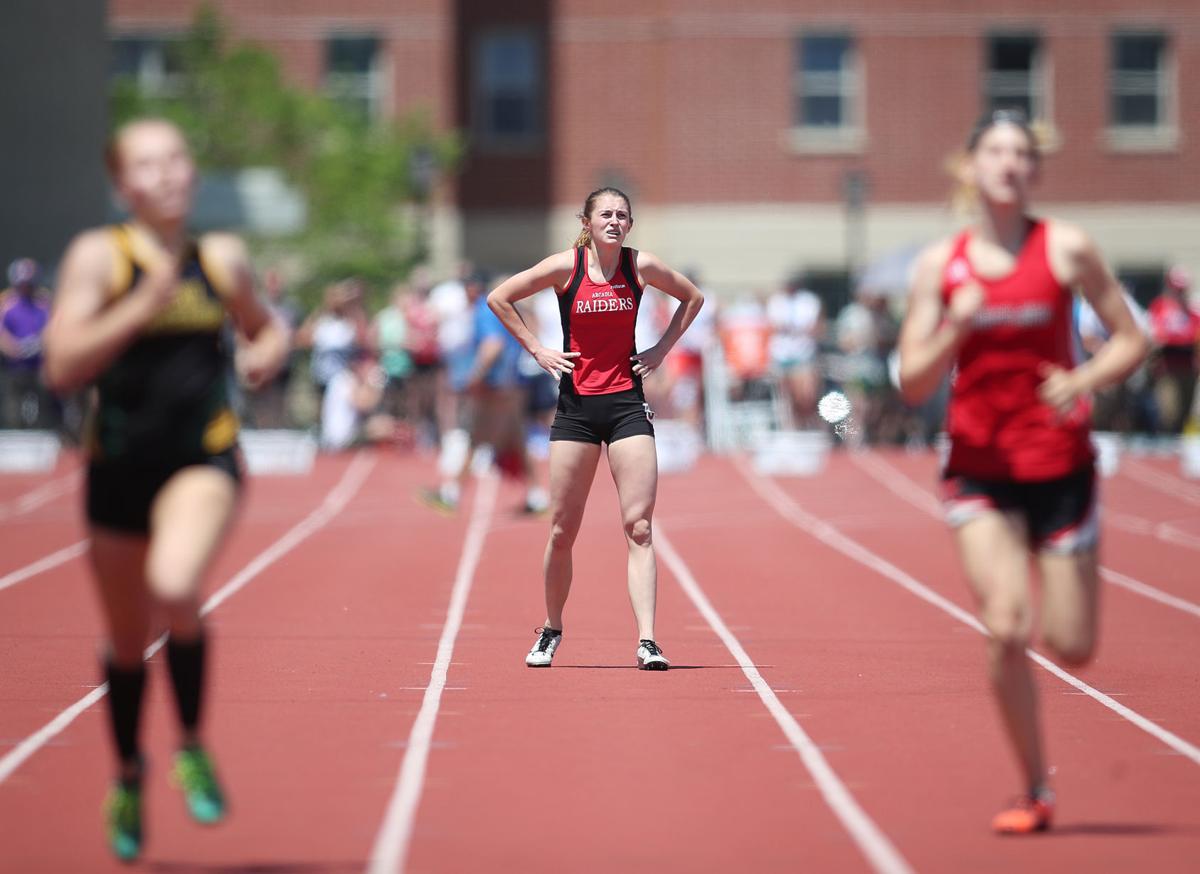 Arcadia’s Abbey Zastrow stops running after a injuring her hamstring in the girls WIAA Division 2 400-meter dash on Saturday at the WIAA state track and field meet at UW-La Crosse. Zastrow had to walk to the finish line. 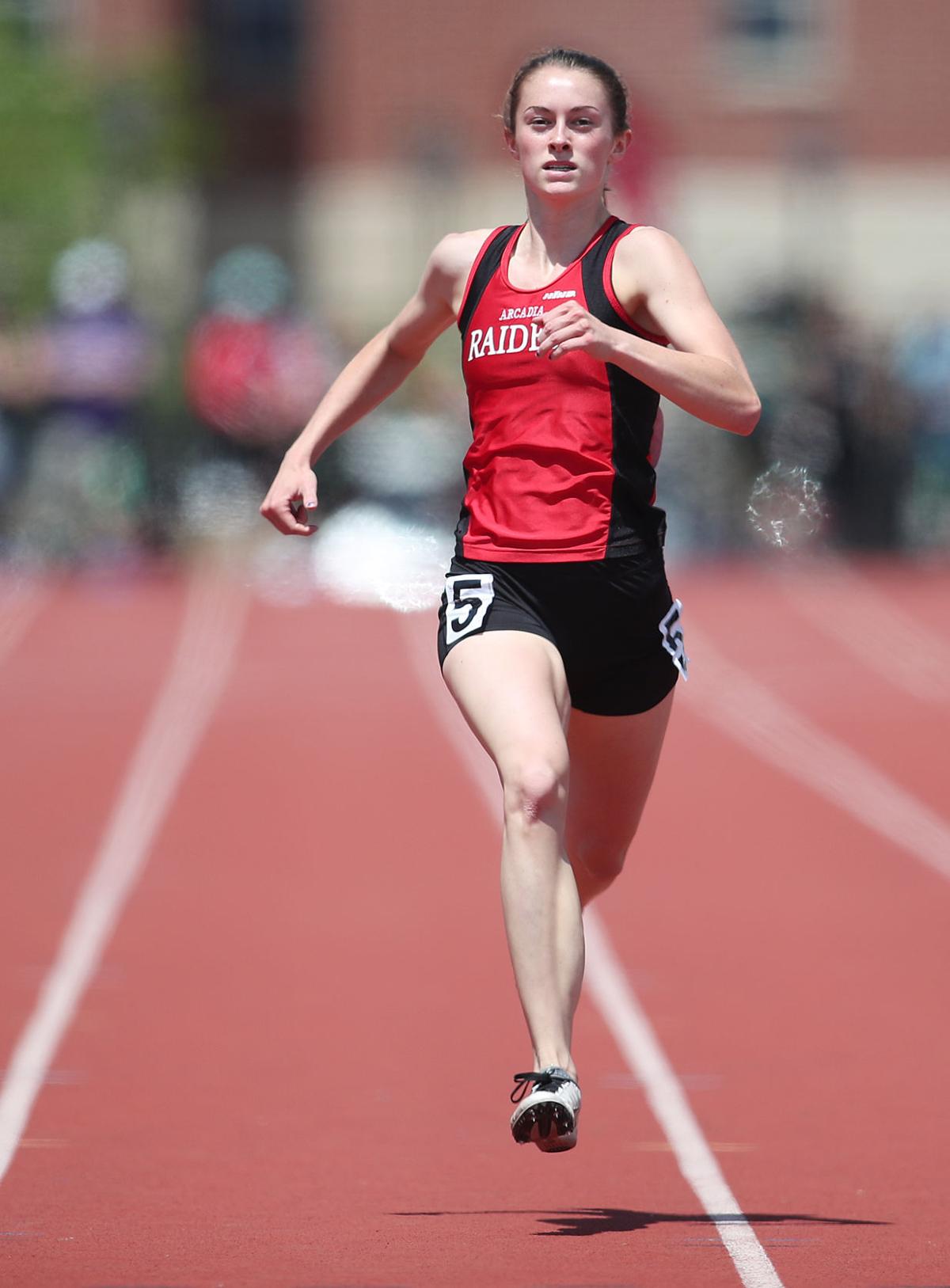 Arcadia's Abbey Zastrow competes in the Division 2 200 meter dash on Friday during the WIAA state track and field meet. She injured her hamstring before Saturday's finals, but competed anyway.

History will remember Abbey Zastrow’s last two races in an Arcadia High School uniform as 10th-place finishes. The record books will say the senior completed the 400-meter dash in 1 minute, 26.02 seconds and the 200-meter dash in 31.41 seconds Saturday at the WIAA Division 2 girls state track and field meet at UW-La Crosse.

Those are the facts. There’s no changing the facts. But they don’t come close to telling the story of what really happened on a hot Saturday afternoon in front of nearly 8,000 people in the greatest spectacle in Wisconsin high school sports.

What the 1:26.02 doesn’t tell you is the sheer look of devastation on Zastrow’s face when, with 50 meters to go, she had to stop and walk to the finish, her dream of setting a state meet record dying the minute her hamstring prevented her from running one more step.

“It really sucks,” Zastrow said. “All season my legs were fine. I almost ran the state record at sectionals. Coming into (Saturday’s 400) I was excited. My coach said that he could tell something is wrong with about 150 meters left. My right leg just pulled up, and ...”

Zastrow paused before finishing her thought.

“You train all season for one race and it’s just thrown out the window.”

What the 31.41 doesn’t convey is the defiance with which it was run. It was suggested by some to Zastrow, who was helped to the trainer’s room under the stands at Roger Harring Stadium after the 400, that she should scratch from the 200, to be held a couple hours later. She went inside Mitchell Hall and jogged around, trying to loosen the muscle.

She didn’t start the 200 in the blocks. She wore regular shoes, leaving her spikes in the bag. She was going to take it easy.

But she was still going to run.

“It was my last high school race,” Zastrow said. “I qualified. It’s something to be proud of. I wanted to run it out.”

It was perhaps the most inspiring 10th-place finish in WIAA state track and field meet history.

“I’m so proud of the way she finished,” Arcadia coach Miles Helgeson said. “She didn’t have anything to prove to anybody.”

It was Zastrow’s goal to break that record, a goal that seemed well within reach at the beginning of this season. She dropped out of the 100 and long jump at sectionals despite winning regional titles in both to make sure she saved every drop of energy possible for the 400. She kept the 200 — she finished third in the event last year and had the second-best state qualfiying time — but would have dropped it, too, if it would have helped her get the 400 record.

“It’s frustrating,” Helgeson said. “The kid’s put in so much time. She’s worked so hard. She’s never had any injury issues. It just wasn’t her day.”

But even if the meet went as planned, even if her hamstring never tightened, even if she broke the 32-year-old record, the 56.08, 55.84, 54.60, whatever that state record time would have been, it wouldn’t have told Zastrow’s story.

There would be nothing about the winter workouts on the hills behind the high school. It wouldn’t mention the ice baths after hard workouts, the track-specific weightlifting sessions after basketball practice, the fact she switched from volleyball to cross country to better prepare for the track and field season.

“I don’t think people see what she does year round,” Helgeson said. “She’s in the weight room all the time. She’s icing. She’s stretching. She’s always asking what she can do, how we can help her get better, any little thing. She’s looking for any advantage.”

It won’t mention anything about her character. When Zastrow was laying face down on a table beneath the stadium with a trainer massaging her hamstring, the first thing she said to Helgeson was “How did Engel do?”

That would be Abbey Engel of Cochrane-Fountain City, one of Zastrow’s closest friends and a regular training partner. She ran in the race before Zastrow injured her hamstring.

“That’s the type of kid she is,” Helgeson said. “She’s incredible.”

Zastrow said she’s lucky she will be able to run again. She’s headed to the University of Mary, a NCAA Division II school, on an athletic scholarship. She should slide right into her favorite event when the indoor season begins in December.

“It’s going to push me in college,” Zastrow said. “This is something you don’t want to end on. This will push me to strive and hit my goals so I don’t feel this devastation again.”

What’s in a number? As it turns out, more than you can ever know.

“Right now, it burns a little bit,” Zastrow said. “I’m sure it’s going to burn for a while. My mom keeps telling me I’ve done a lot of things that not many people can say they’ve done. It’s something that, down the road, I’ll be happy with the things I’ve done and that I finished it out.”

“I’m so proud of the way she finished. She didn’t have anything to prove to anybody.” Miles Helgeson, Arcadia coach

Arcadia’s Abbey Zastrow stops running after a injuring her hamstring in the girls WIAA Division 2 400-meter dash on Saturday at the WIAA state track and field meet at UW-La Crosse. Zastrow had to walk to the finish line.

Arcadia's Abbey Zastrow competes in the Division 2 200 meter dash on Friday during the WIAA state track and field meet. She injured her hamstring before Saturday's finals, but competed anyway. 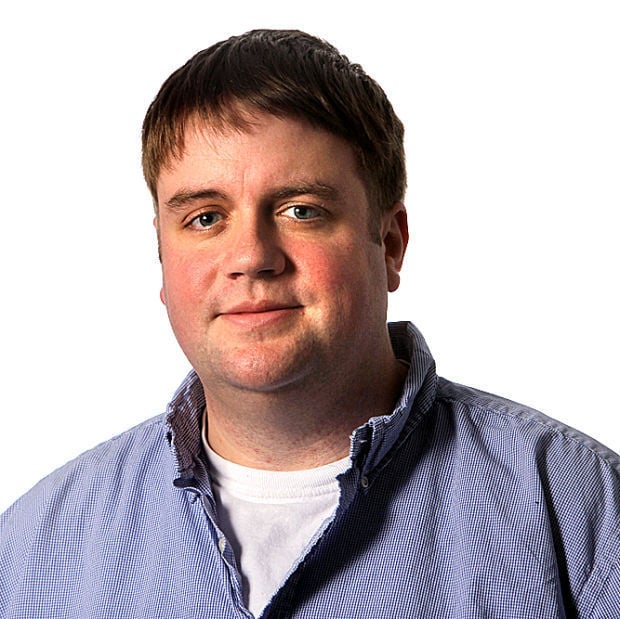