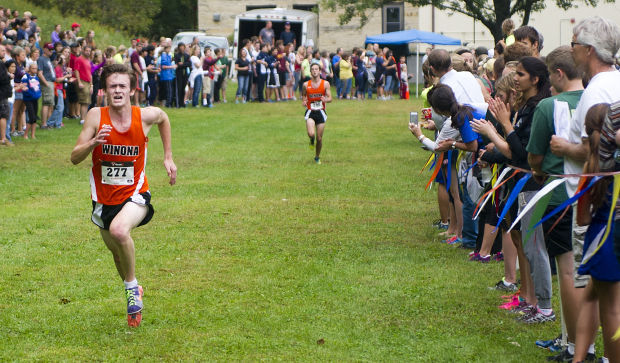 Winona's Hunter Bailey approaches the finish line of the boys race during the Jim Flim Invitational on Saturday at Saint Mary's. Bailey, who won the meet the past two years, finished fourth. 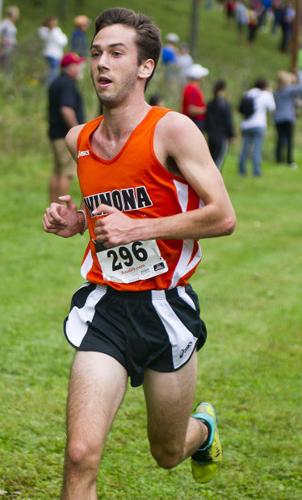 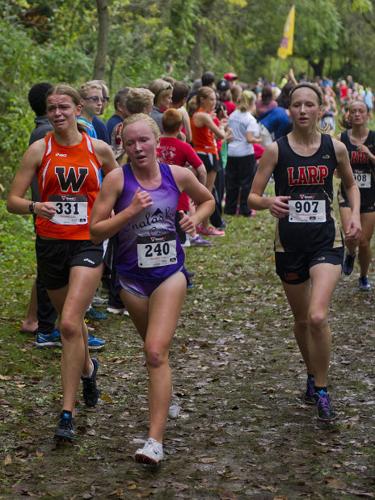 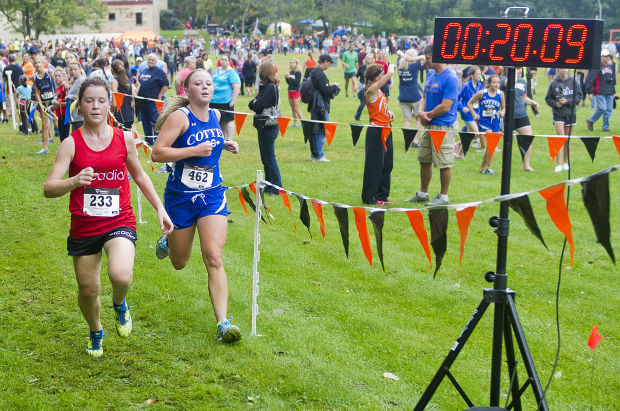 Running together in the Jim Flim Cross Country Invitational for the last time, Hunter Bailey and Braydon Johnson turned in top-5 finishes.

The Winona Senior High School teammates — friends and training partners since seventh grade — placed fourth and fifth to lead the Winhawks to a third-place finish at the 16-team meet Saturday morning at Saint Mary’s University.

“Some people get the impression that cross country is an individual sport, and there definitely is an individual aspect to it,” WSHS coach Jed Reisetter said, “but really the team bonds in cross country happen on those tough miles and those long runs and those intense workouts in practice when you’re right there with somebody who understands what you’re feeling and vice versa.”

Bailey and Johnson have been through all that.

That may have been the case the past few years as Bailey established himself as one of the top runners in southeastern Minnesota, winning the Big Nine Conference meet last year and taking a top-10 ranking into the state meet.

But this year, it’s been the other way around. Bailey, who won the past two Jim Flim boys titles, has been working his way back from a spring surgery that put a bar into his chest to increase his chest cavity size. As Bailey dealt with complications from the surgery, he couldn’t train and came into the season a little out of shape for his standards.

But Johnson has been there, pushing him every step of the way, serving as that motivation that Bailey did before.

“He helps push me so much,” Bailey said. “He’s a great friend, and it’s really fun to have him out there because we work so well together. It’s a little different than it has been, but I really enjoy it. It’s a lot of fun.”

Bailey, who was fourth in 17:07.7, collapsed after he crossed the finish line, holding his side. He tore scar tissue — effects of the surgery — at a meet hosted by Rochester Mayo last week, but said Saturday’s pain wasn’t quite as severe, although it was limiting.

“There wasn’t much of a click this time,” Bailey said. “Close to the 2-mile mark, it slowly started getting worse and worse. With a mile to go, it was really aching, really painful.

Bailey is no stranger to injury. Last year, he came close to blacking out after several races which eventually led to the bar being put into his chest. Johnson said seeing how much his teammate gives is motivation.

“Just to see how hard he’s working, I just want to match that intensity,” he said. “It really helps me.”

Cotter’s top finisher was Henry Killen, who ran a 18:27.3. The Ramblers placed ninth.

In the 4,000-meter girls race, Winona’s Caitlin Domeyer gutted through an ankle injury to finish 14th overall in 17:06.8, leading a young Winhawks team to a fourth-place finish.

“We’re getting even more optimistic about the girls,” said Reisetter, who was thankful for the efforts of countless volunteers to pull off the 18th annual Jim Flim Invitational. “Some of the young ones are figuring out. They have some great older girls leading them throughout the way.”

Rochester John Marshall’s Emma Christensen repeated as the girls champion, finishing in 15:23.6. Dover-Eyota put three runners in the top 10 and four in the top 11 to grab the team title.

View photos of the Jim Flim Invitational held in Winona.

US Soccer reaches equal pay agreement for men and women

US Soccer reaches equal pay agreement for men and women

Winona's Hunter Bailey approaches the finish line of the boys race during the Jim Flim Invitational on Saturday at Saint Mary's. Bailey, who won the meet the past two years, finished fourth.