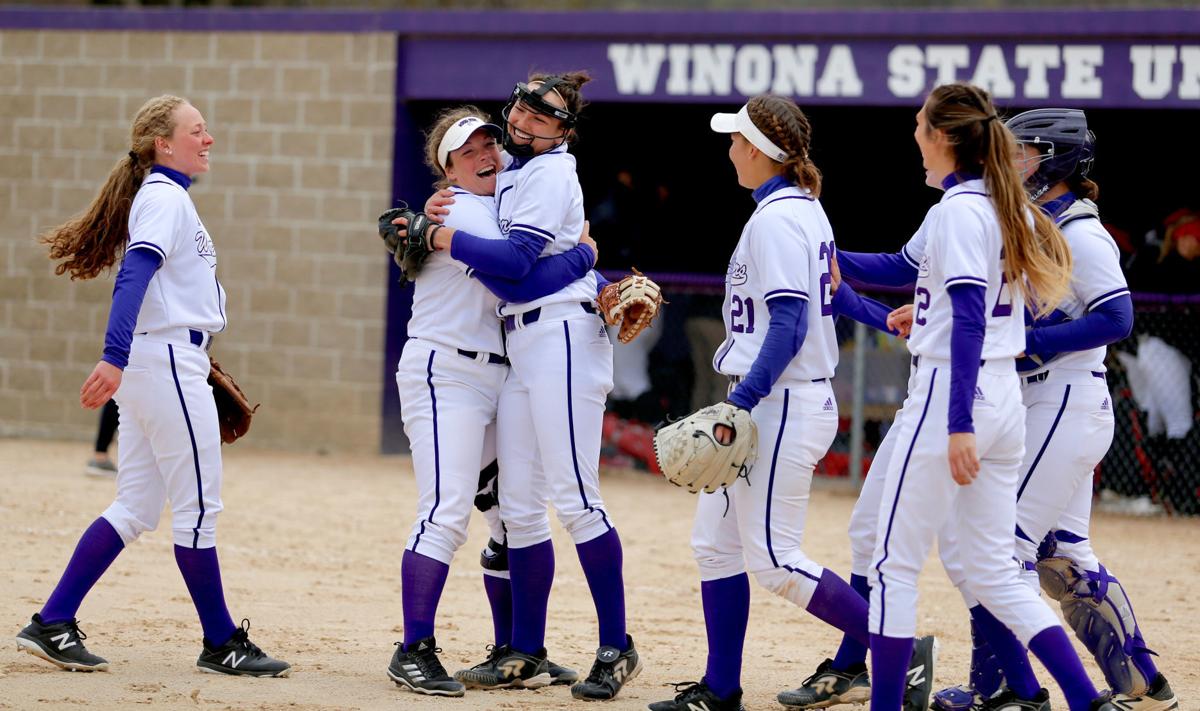 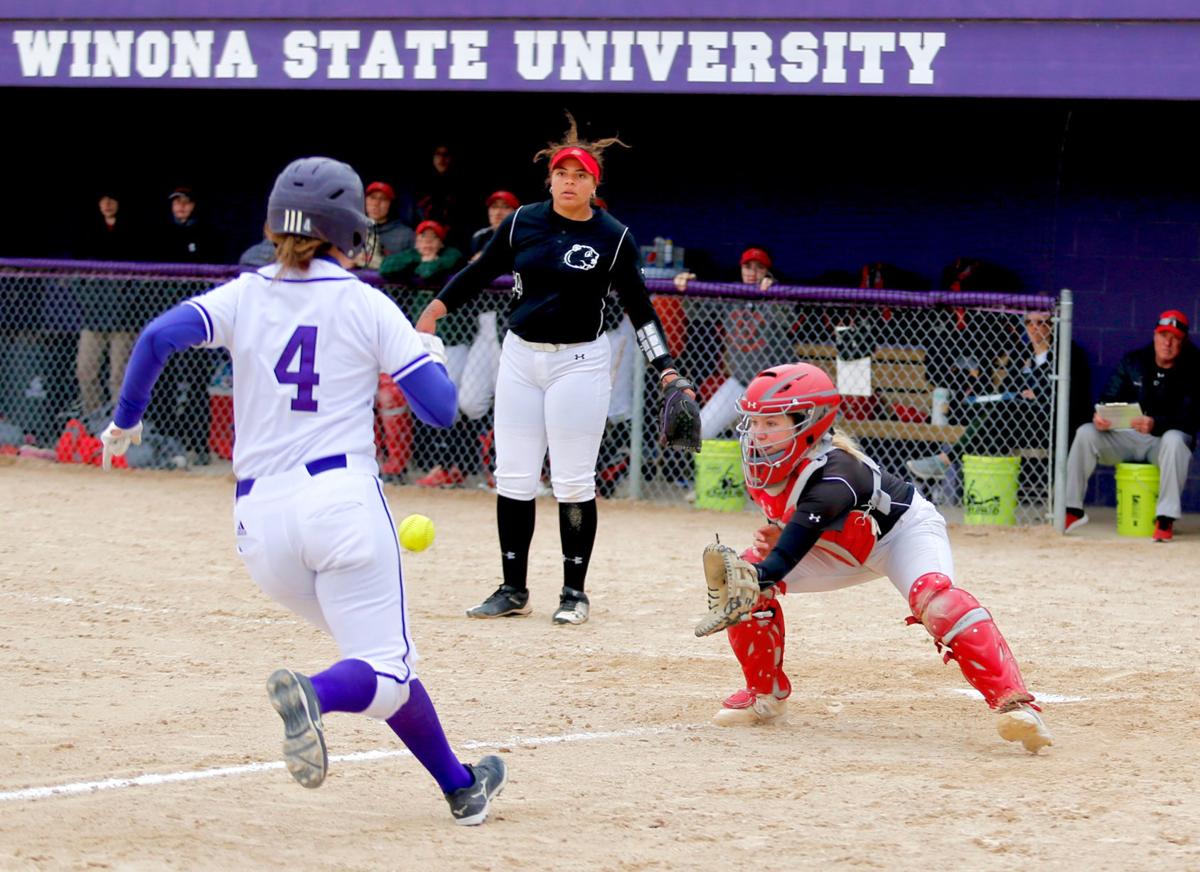 Winona State University's Rylee Stout scores a run on a close play at the plate during Sunday's game against Minot State. 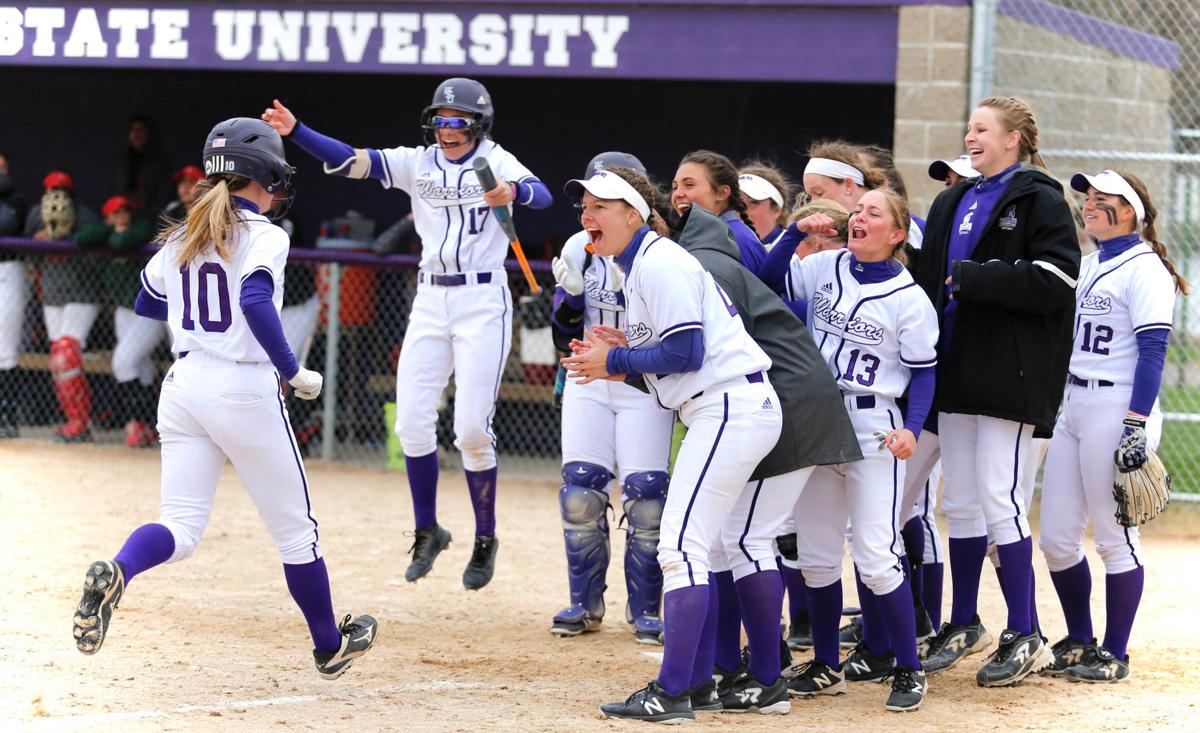 Winona State Women's Softball team celebrates both a home run and a perfect 30-0 NSIC regular season record with a sweep of Minot State on Sunday.

Winona State University's Rylee Stout scores a run on a close play at the plate during Sunday's game against Minot State.

Winona State Women's Softball team celebrates both a home run and a perfect 30-0 NSIC regular season record with a sweep of Minot State on Sunday.

Going undefeated in any conference is tough.

But, going undefeated in the NSIC, specifically in softball, was thought to be impossible.

That is until now.

The Winona State softball team proved that it was more than possible when it capped off a 30-0 NSIC record with a doubleheader sweep against Minot State outscoring the Beavers by a combined score of 20-1 on Sunday. They parlayed their undefeated conference mark into a No. 1 seed in the NSIC Tournament which begins Thursday at RYFSA Complex in Rochester, Minn. After a first-round bye, the Warriors will play the lowest remaining seed in the second round of the tournament at 2 p.m. Thursday. The tournament wraps up Saturday.

When you factor in the grueling travel schedule that calls for eight-to 10-hour bus rides, all the doubleheaders, and the unpredictable midwest spring, one can see why the perfect NSIC season was considered impossible.

Coach Greg Jones is still trying to figure out how it happened.

“I can’t, I really can’t (wrap my head around it),” Jones said. “It’s one of those things all year I wouldn’t let anybody talk about it around me, because I just kept saying, ‘it just doesn’t happen in this league.’ This league is too good — there are too many good teams — too much weather; too many things that could happen. You just can’t go 30-0 in this league. To say that we did it. I really can’t get my head wrapped around it.”

So how did the Warriors do it?

Winona State received a big boost when Liz Pautz made the decision to transfer from Division I University of Wisconsin-Green Bay to the Warriors. Add her to Jordyn Kleman and the Warriors suddenly had two aces when most teams were lucky to have one.

Pautz has been lights out this season, as she is currently second in all of Division II with a 0.74 ERA. She has allowed just 13 earned runs while striking out 185 in 122 ⅓ innings pitched.

Kleman, meanwhile, has been her usual self. She is fourth in the country with 24 wins and sports a 1.59 ERA. She threw two no-hitters this season to give her seven for her career. The Warriors are seemingly unhittable at times and are the reason why they rank fourth in all of Division II with a 1.39 team ERA.

“The fact that Liz has gone through the season with a sub-one ERA and the fact that Jordyn has been the pitcher of the week in the league five times, those are just impressive performances, mentally and physically for them to continue to keep their edge,” Jones said. “They were able to get out of jams at times where I thought, ‘ok they are going to falter here.’ I think that is just a testament to their mental game as well as the defense behind them.”

Offensively, Jones admitted he his much more comfortable with the Warriors bats than he was last year. He felt the overall depth of this year’s lineup is the difference maker.

“The best part of our offense compared to other years is the depth and the length of our offense,” Jones said. “The ability to get production out of anybody one through nine. We have had different heroes on different days. We have been able to start two-out rallies anywhere in the lineup and have been able to hit the ball out of the ballpark putting up instant offense at times.”

All nine of the Warriors regular starting lineup have an on-base percentage of .338 or higher with seven of the nine hitting well above .300. And as a team they are seventh in the country hitting .349 collectively.

The senior shortstop has been on a tear lately hitting 16-of-23 with six home runs, four doubles, 13 RBI, and 18 runs scored in her last eight games. It brought Van Zyl’s average up to an eye-popping .484 including a .511 average during conference play. She’s on pace to do better than her .473 batting average last season.

“We were just talking about in the dugout that she has really turned it on as of late,” Jones said. “She’s had a great year. She was hitting .400 the entire season, but it was a quiet .400. But now suddenly the power is there, the clutch performance is there. Numerically I couldn’t believe last year when it was happening. I was hoping this year to guard against a ghost she couldn’t catch, because you can’t hit .470 two years in a row. Well she’s found a way to do it.”