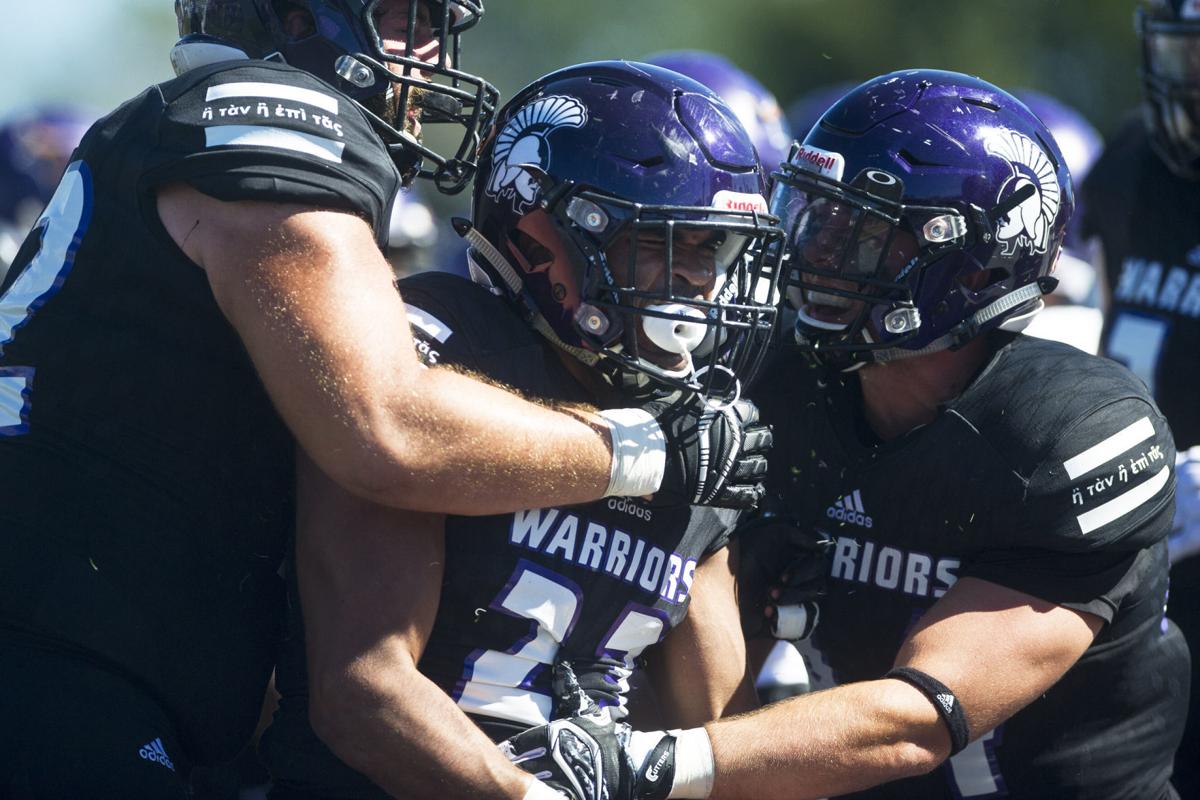 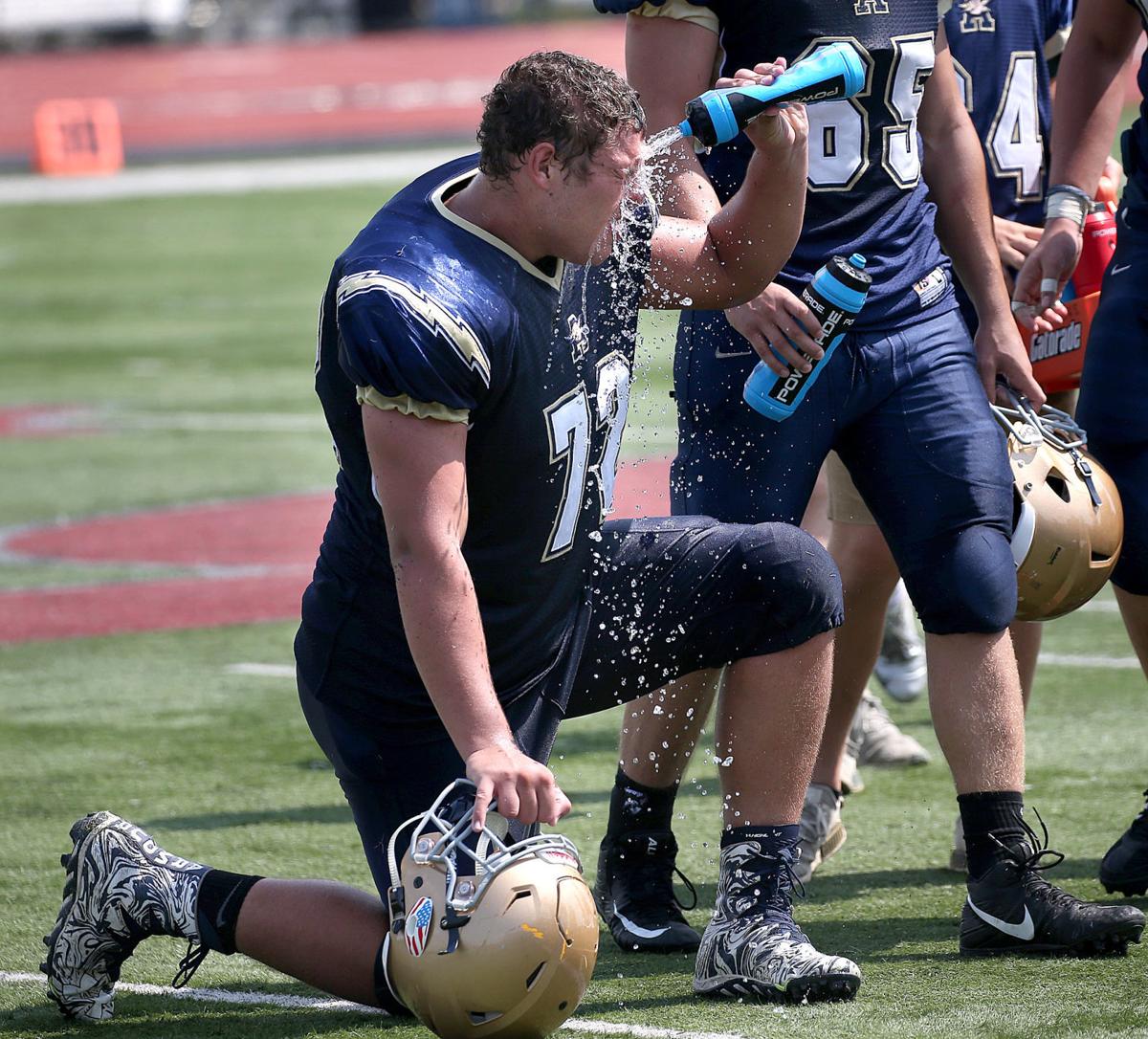 Aquinas’ Bryce Lee cools off with some water during his senior season at UW-La Crosse. 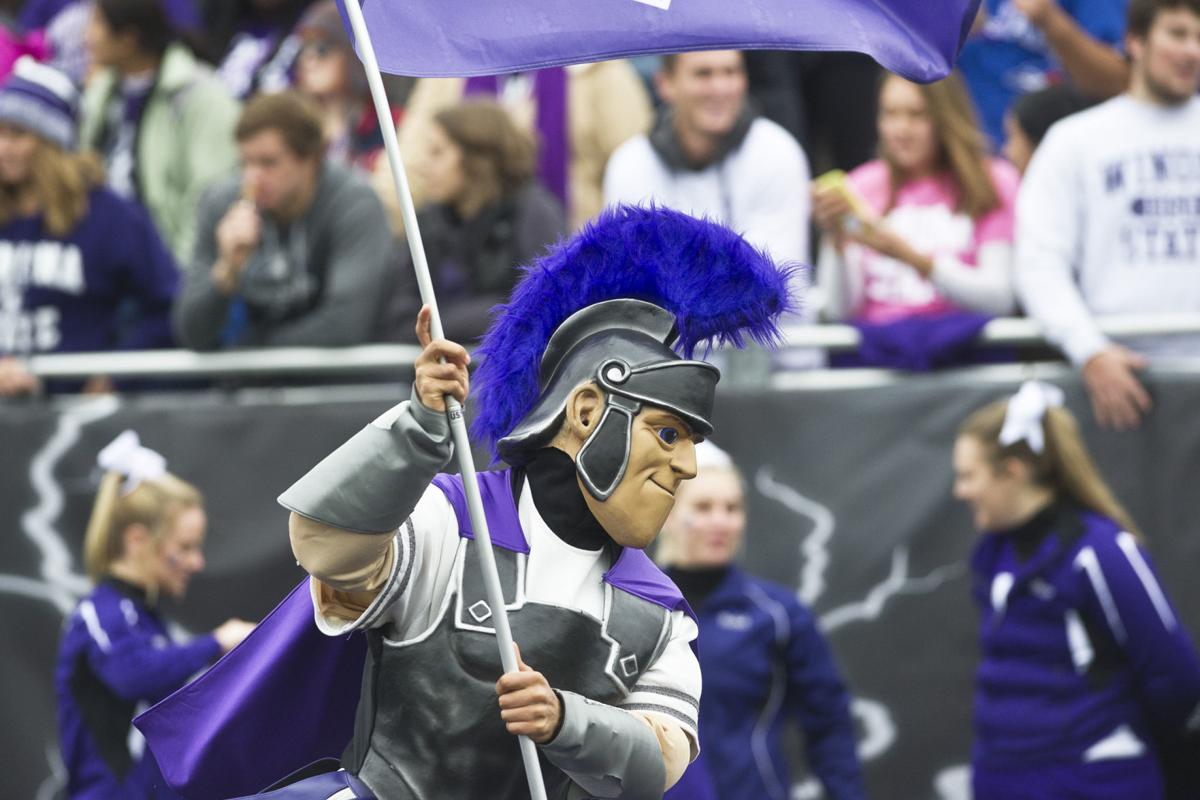 Wazoo, the Winona State mascot, waves a flag during the Warriors' homecoming game against the University of Mary. 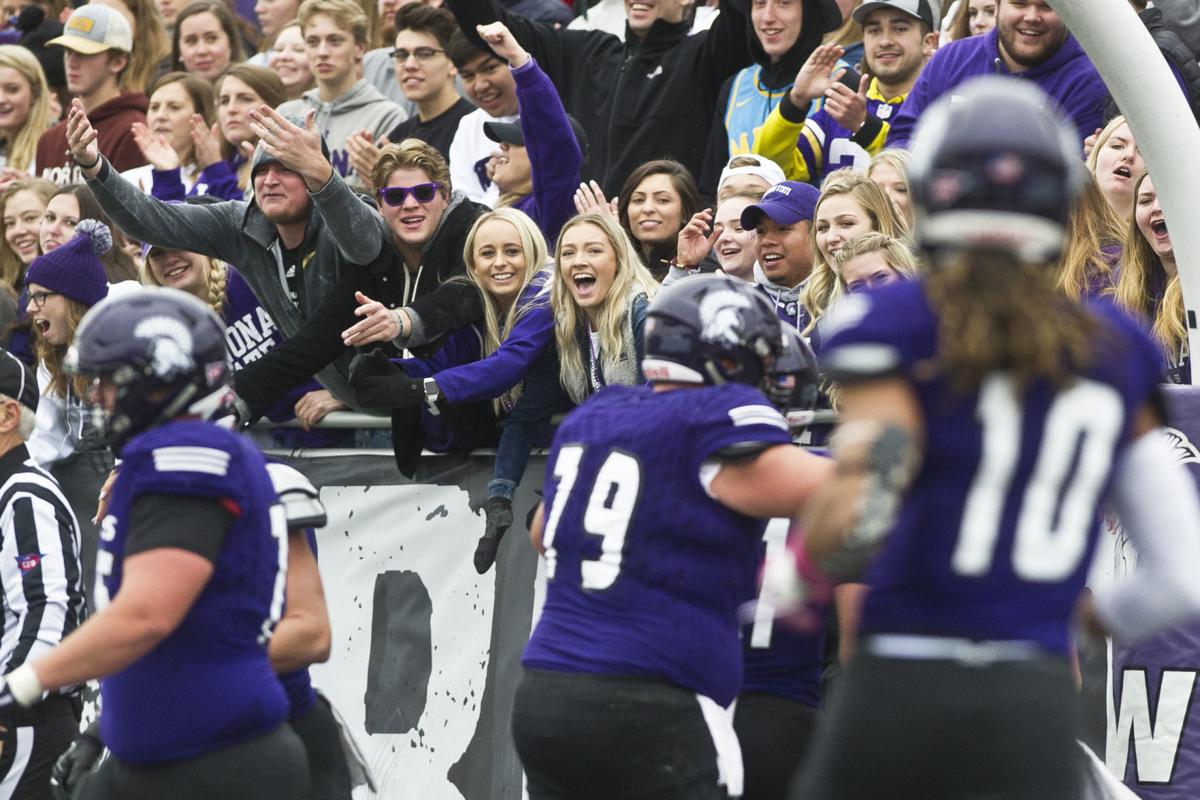 The Winona State student section cheers after a Warrior touchdown against the University of Mary at Altra Federal Credit Union Stadium in Winona.

Aquinas’ Bryce Lee cools off with some water during his senior season at UW-La Crosse.

Wazoo, the Winona State mascot, waves a flag during the Warriors' homecoming game against the University of Mary.

The Winona State student section cheers after a Warrior touchdown against the University of Mary at Altra Federal Credit Union Stadium in Winona.

The state of Wisconsin was good to the Winona State University football team on National Signing Day this year, as 10 of the 16 players to sign National Letters of Intent to play for the Warriors on Wednesday hail from the Badger State.

The Warriors came away with major help in the trenches with seven players along the offensive line, including Division I transfer Zack Taylor from Western Michigan.

The class includes four offensive linemen — all listed in excess of 300 pounds, two defensive linemen, and one player listed as either offense or defense.

The remaining nine members of the class include three linebackers, three wide receivers, a quarterback, a safety and a tight end. Sawyer Maly, a receiver out of Waunakee, Wis., was the recipient of the Al Toon Award given to the best senior receiver in Wisconsin.

Here’s an introduction to each member of the class:

Ethan Trumpy: The 6-foot-6, 330-pound offensive lineman from Pekin High School in Pekin, Ill. was an IHSA Class 7A all-state honorable mention and was a unanimous first-team all-Mid Illini Conference selection. Lived with his family in the United Arab Emirates before moving back to the United State in 2016.

Declan Kyler: A 6-3, 310-pounder from Skyline High School in Mesa, Ariz., Kyler is listed as a two-star recruit by 247sports. He had offers from many NSIC schools and a preferred walk-on offer from New Mexico.

Ben Johnson: A finalist for the Joe Thomas Award presented to the best senior offensive lineman in Wisconsin, the 6-4, 305-pounder out of Sun Prairie High School in Sun Prairie, Wis. was named to the WFCA all-state first team and was the 2018 Big 8 Conference offensive lineman of the year.

Alec Morris: The 6-5, 300 pound offensive lineman from La Crosse Logan High School was named to the All-Mississippi Valley Conference first team. He allowed only two sacks in his senior season and paved the way for an offense that gained 1,502 rushing yards.

Zack Taylor: A transfer from Western Michigan, the 6-2 290-pound defensive lineman from New Berlin Catholic Memorial High School appeared in one game at WMU. He was the No. 9 prospect in Wisonsin in the class of 2016. He was a first-team all-state selection as a senior.

Bryce Lee: Listed as an OL/DL, the 6-4 270-pound lineman out of Aquinas High School in La Crosse. had 40 tackles with four sacks and two forced fumbles on his way to being named a member of the La Crosse Tribune All-Area Team.

Luke Preston: After transitioning from defensive tackle to linebacker for his senior season, the 5-10 210-pounder out of Maine South High School in Park Ridge, Ill. made 81 tackles, 14 tackles for loss and eight sacks with an interception and two forced fumbles. He was an all-conference selection as a DT as a junior and as a LB as a senior.

Bronson Schofield: The 6-0 200-pound linebacker racked up 113 tackles as a senior including 29 in a single game plus nine tackles for loss on his way to being named the 2017 Heart O’North Conference Defensive Player of the Year.

Sawyer Maly: The winner of the Al Toon Award given to the best senior receiver in Wis., the 6-1 185-pounder from Waunakee High School in Waunakee, Wis. racked up 1,169 yards and 14 touchdowns as a senior. He was a first-team all-state selection and a member of the Wis. Division II State Championship team. He was the fastest player at the 2018 WFCA combine, clocking a 4.40 40-yard dash. Was the high school teammate of fellow Warriors commit Austin Keller.

Josh Giese: The 6-3 190-pound receiver from Hortonville, Wis. caught 48 passes for 702 yards and seven touchdowns as a senior. He caught 28 passes for 661 yards and eight touchdowns with an average of 23.6 yards per catch as a junior.

Malik Brown: A two-way player for La Crosse Logan High School, the 6-1 180-pounder caught 23 passes for 348 yards and a touchdown on offense and had 33 tackles and a fumble recovery on defense as a senior.

Adam Watts can be reached at adam.watts@lee.net or on Twitter @adamhwatts.

10: The class includes 10 players from Wisconsin.

5: Five members of the class were first-team all-state selections.

No surveys. Faster-loading pages. Join for $3!