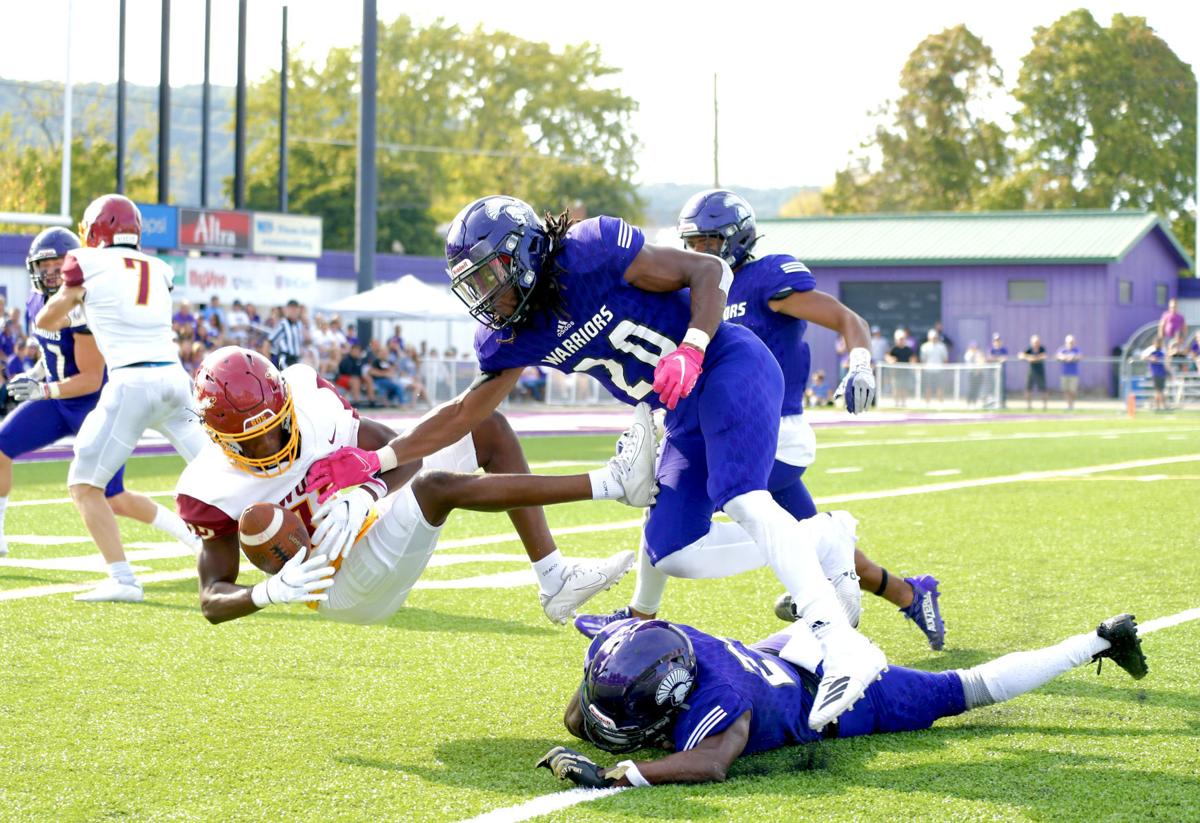 Cam Gavin goes for the tackle during the Winona State football team's NSIC game against Northern State at Altra Federal Credit Union Stadium on Saturday. Gavin made 12 tackles, but the Warriors lost 52-49. 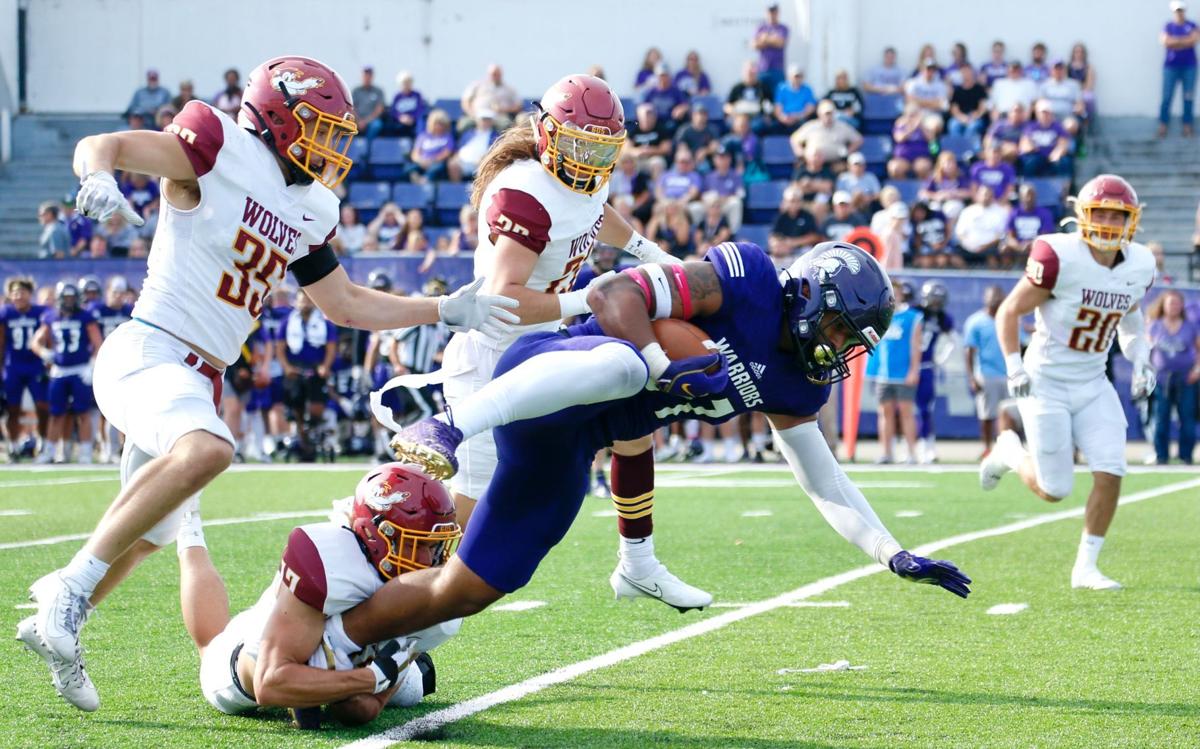 Jaylen Schleicher is tackled after making a catch for the Winona State football team in Saturday's game against Northern State. Schleicher had four catches for 62 yards.

WINONA — The Winona State University football team (3-3) played well in the second half, but could not overcome a poor first-half performance in losing its homecoming game 52-49 against Northern State (4-2) on Saturday.

Neither team could get much going offensively early on, with a 3-yard QB keeper by Northern State senior Hunter Trautman at the 2-minute, 20-second mark serving as the only score in the first quarter.

The Wolves’ passing game picked up in the second quarter, though, scoring through the air on all four of its drives in the period.

After moving down the field in chunks, running back Vance Barnes caught a 12-yard touchdown on a wheel route from Trautman at 10:47 for a 14-0 NSU lead.

Winona State had its best play of the half on the ensuing kickoff when senior Jake Balliu broke free for a 97-yard touchdown to cut the deficit to 14-7.

Northern State sandwiched a WSU punt with a pair of passing scores, first a 26-yard catch by junior Dewaylon Ingram at 7:15, then a 2-yard catch on an end zone fade by senior Dakota Larson for a 28-7 lead with 2:03 remaining until halftime.

The Warriors’ offense was rejuvenated by entering their two-minute drill, moving 56 yards in three plays and 62 seconds with senior Owen Burke throwing the 50th touchdown of his career on a 28-yard pass to freshman Jason Michael Young to make it a 28-14 game with 1:01 left in the second quarter.

Not only was the touchdown a milestone moment for Burke, the drive also allowed Burke to surpass Jason Mitchell for fifth all-time in passing yards in WSU history.

Burke completed 22 of 38 passes for 334 yards, five touchdowns and three interceptions, but he was also sacked five times and fumbled a snap. Tyler Knutson caught two touchdown passes, and Ethan Wittenburg had a team-high 72 receiving yards.

NSU had a similarly efficient hurry-up drive, hitting the end zone with 3 seconds on the clock on a 9-yard pass from Trautman to Larsen to extend the lead back to three scores at 35-14.

It was a rough first half all around for the Warriors, with only 90 yards of offense and a mere 8 yards rushing. Meanwhile, NSU had 197 yards through the air, passing at will against the WSU secondary.

Both teams scored a pair of touchdowns in the third quarter, with both squads also recording their longest offensive plays of the game in the period.

The Warriors started the half strong, with senior running back Dominik London zig-zagging his way through the Wolves defense for a 44-yard rushing score that more than quintupled Winona State’s first-half rushing yard total and brought the score to 35-21 at 12:33.

After both teams traded punts, Ingram slipped past the Warriors defensive backs for a wide open 72-yard receiving touchdown to bring the deficit back to three scores, 42-21, at 10:34.

A 39-yard passing strike from Burke to Wittenburg, and a five-yard rushing score by NSU sophomore running back Brett Brenton set up a 49-28 score heading into the final quarter.

Winona State stayed hot early in the fourth quarter, scoring on its first two possessions and forcing a three-and-out in between. Junior receiver Daryl Williams caught a 41-yard touchdown at 14:50 and Knutson caught a 17-yard score at 13:14 to bring the deficit to 49-42, the first time the Warriors were within one score since early in the second quarter.

After Knutson's score, four different Winona State receivers had caught a touchdown in the game, and seven players caught at least one pass in the contest.

With so many options, if Burke has a bit of time to scan the field, someone is going to end up making a big catch.

"You can see the kind of skill level we have, but we just have to be able to protect the quarterback better and get more chances," head coach Tom Sawyer said.

After allowing 35 points in the first half, the WSU defense allowed just 17 in the second half while forcing a trio of three-and-outs, which gave the Warriors offense the breathing room it needed to try to spark a comeback.

"We always have confidence in each other," Burke said. "They gave us a chance to get some points on the board."

Burke threw an interception on the Warriors’ next drive and Northern State burned the clock down below two minutes, though WSU blocked their 44-yard field goal attempt to take over at the 39-yard line with 1:51 remaining.

Just 25 seconds later, Knutson was celebrating in the end zone with his second touchdown reception of the game, cutting the score to 52-49 with 1:26 left.

As the Warriors get tuned up for next Saturday's 1 p.m. home game against Southwest Minnesota State University, Sawyer says his team needs to clean up its penalties after getting flagged 12 times for 123 yards against the Wolves, including a handful that came in crucial situations on third or fourth down, or in the red zone.

"We can’t afford to have those penalties to give them more opportunities," Sawyer said.

IN PHOTOS: Wolves able to get by Warriors

The Winona State University Warrior football team found themselves down 35-14 at halftime of Saturday's Homecoming football game, but came bac…

Cam Gavin goes for the tackle during the Winona State football team's NSIC game against Northern State at Altra Federal Credit Union Stadium on Saturday. Gavin made 12 tackles, but the Warriors lost 52-49.

Jaylen Schleicher is tackled after making a catch for the Winona State football team in Saturday's game against Northern State. Schleicher had four catches for 62 yards.