“’Your approach scares a lot of recruits away,’” recalled Froendt, a high school coach in Nebraska for nearly 30 years. “The expectations are high both culturally and academically. If kids can’t live up to that, then they’re not going to be drawn to that.”

But Froendt said that was what attracted Dickerson to Minnesota, so he committed to the Gophers in April. With Dickerson as the U’s top-rated recruit in the 2021 class, the Gophers’ recruiting ranks in top three in the Big Ten and top 10 in the nation, according to 247sports.com’s composite rankings.

The Gophers have four recruits who have received four-star rankings, the most the U has had in one class since recruiting services started in the early-2000s. Besides Dickerson, a top-100 player in the country, Minnesota has four-star players in Antioch, Illinois, quarterback Athan Kaliakmanis, Desert Edge, Arizona, cornerback Steven Ortiz and Naperville, Illinois, athlete Sam Jackson.

“From all sides those guys are legitimate blue-chip prospects,” said 247sports’ Midwest recruiting analyst Allen Trieu, who pointed out the schools Minnesota beat.

Dickerson had home-state Nebraska, Oregon and Boston College in his final four, with LSU and Ohio State previously in the mix.

Notre Dame was a top contender for Jackson, but the Fighting Irish wanted him to play defense. Minnesota is expected to give him a shot at quarterback and possibly other spots on offense.

Washington was the previous favorite for Ortiz, while Penn State had been a strong contender after a visit to Happy Valley last fall.

While those three prospects committed in April, Kaliakmanis committed to the U in March 2019 over Iowa, Tennessee and others.

“You have to talk about the importance of Athan Kalikmanis being first,” Trieu said. “I think that has helped a ton to have your quarterback and a name guy, a highly ranked guy as the foundation of the class. I know that other kids and even high school coaches have preached the value of saying, ‘If you want to win at the next level, look at who the quarterback commit is in your class.’ A lot of kids have started to assess that. I think Athan’s presence has really been a driver in the class.”

The Gophers’ historic 11-2 season last fall, highlighted by big wins over Penn State and Auburn, has boosted the U’s recruiting, as well.

“We’ve had consistency of growth in every area of our program, and now we have the proof to back it up,” Fleck said.

Added Trieu: “They have even more ammunition to go out there and recruit with. I think that is definitely paying off right now with what they have got right now in ‘21.”

The Gophers have never had a top-25 recruiting class, with last year’s class coming in 38th in the nation and ninth in the Big Ten. But with four players given four-star rankings, the U’s current bunch has a better toehold to keep a higher spot come the first signing period in December.

“Things move around so much between now and at the end of the cycle,” he said. “That said, I do think that last year’s class, while very good, it did not have the top-end talent that this class has so far. ... I think the top end of this class has a good chance to carry this class right up until signing day.”

The U’s current collection will need to add offensive linemen, with only 6-foot-7, 245-pound Annandale tackle Logan Purcell committed so far. Last year the Gophers capitalized on seeing O-linemen at camps, something they likely won’t be able to do now as the coronavirus pandemic continues to sideline sports.

The Gophers received nine commitments in April, an impressive haul considering the NCAA put a moratorium on in-person recruiting on and off campus because of COVID-19.

“Whatever comes, we will adapt,” Fleck said of the U’s recruiting strategy last week. “We cannot let the result fade because of the circumstance. We actually have to be better. Our recruiting staff has done a great job of putting together virtual tours.”

Trieu said Minnesota was “ahead of the game” on virtual visits for recruits to see the campus, stadium and practice facility without having to leave their homes.

“You see other schools molding themselves after that,” Trieu said. “I do think there are some copycats. ... (Minnesota’s) video department has done a great job. They are not just slapping together some videos. I think that at the end of this class, we are going to say, ‘Coach Fleck and some assistants are great recruiters.’ And I think their social media staff and their video staff are the unsung heroes.”

Fleck repeatedly has said players commit more to a particular coach and a culture than a school, its facilities or other factors.

“One great thing about Coach Fleck is he is very self-aware, so he knows that his style is going to suit certain types of players personality wise better than others,” Trieu said. “He will not compromise on that just to recruit a guy. He is who he is, and if you vibe with that, then, ‘C’mon and be a Gopher.’ If you don’t think it’s a good fit from your recruitment, then it probably wouldn’t have worked out for you as a player at Minnesota anyway.”

Dickerson is lockdown cover corner at 5-foot-10 and 165 pounds. Since his freshman year in high school, he has given up just one one passing touchdown while also displaying playmaking ability as a running back and wide receiver.

“Conferences didn’t matter; traditions didn’t matter; geography didn’t matter,” Froendt said. “It was about, A, relationship with coaches. And B, who could develop him to possibly get to the next level as an athlete and as a man.”

On Dickerson’s recruitment, Froendt said Fleck and the Cornhuskers’ Scott Frost were the only head coaches continually involved in the courtship. Gophers safeties coach Joe Harasymiak was one of the first assistants in the nation to visit Dickerson in Omaha; Iowa State was the first to offer a scholarship.

“The Minnesota coaching staff did an amazing job, basically out-recruiting people,” Froendt said. “They formed great relationships. They were genuine. They were relentless.”

Every week is about the same for Max Meyer these days: Monday through Friday, the Gophers’ pitching star and soon-to-be first-round draft pick…

Tens of billions of dollars on the line as pro and college sports look to return, with or without fans

At some point, the conversations turn to money.

Ritter was Minnesota's ace in the circle in the early 2000s and has been Minnesota's pitching coach since 2008.

John Clay: The NCAA is finally acting on the FBI college basketball investigation

Never mind those stay-at-home orders, the NCAA has been making news. Basketball news. Infractions committee news. The Indianapolis enforcers are finally following up on the FBI's college basketball corruption scandal in 2017. Notice of allegations have been issued. Some responses have been made. More of both are sure to come. So, updates: - Louisville: U of L received its notice of allegations ...

More and more, it looks like the ramp-up to what officials hope is a full college football season will begin in mid-July. Yahoo Sports reported last week that the NCAA Division I football oversight committee was leaning toward a six-week preseason camp, about two weeks longer than the normal beginning to the season. NCAA approval could come the middle of this month, according to Yahoo. The ... 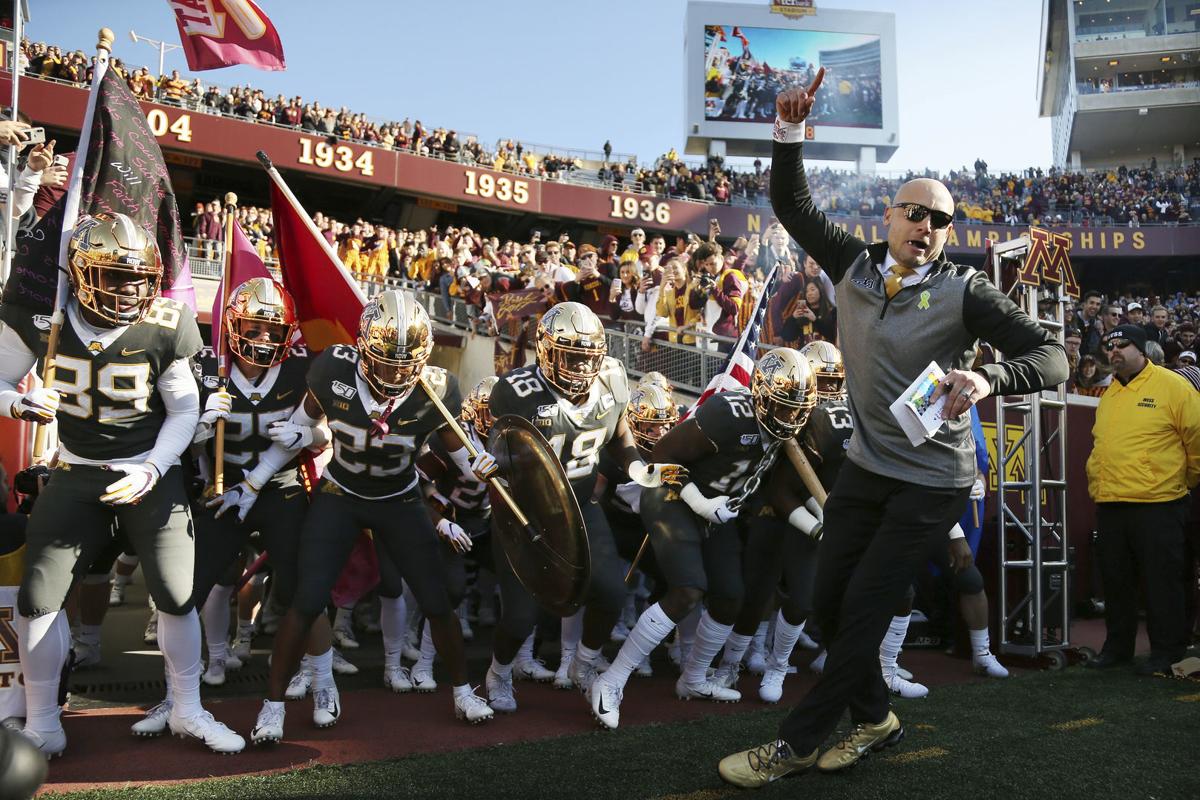 In this Oct. 26 photo, Minnesota head coach P.J. Fleck leads him team on the field prior to a game against Maryland in Minneapolis.