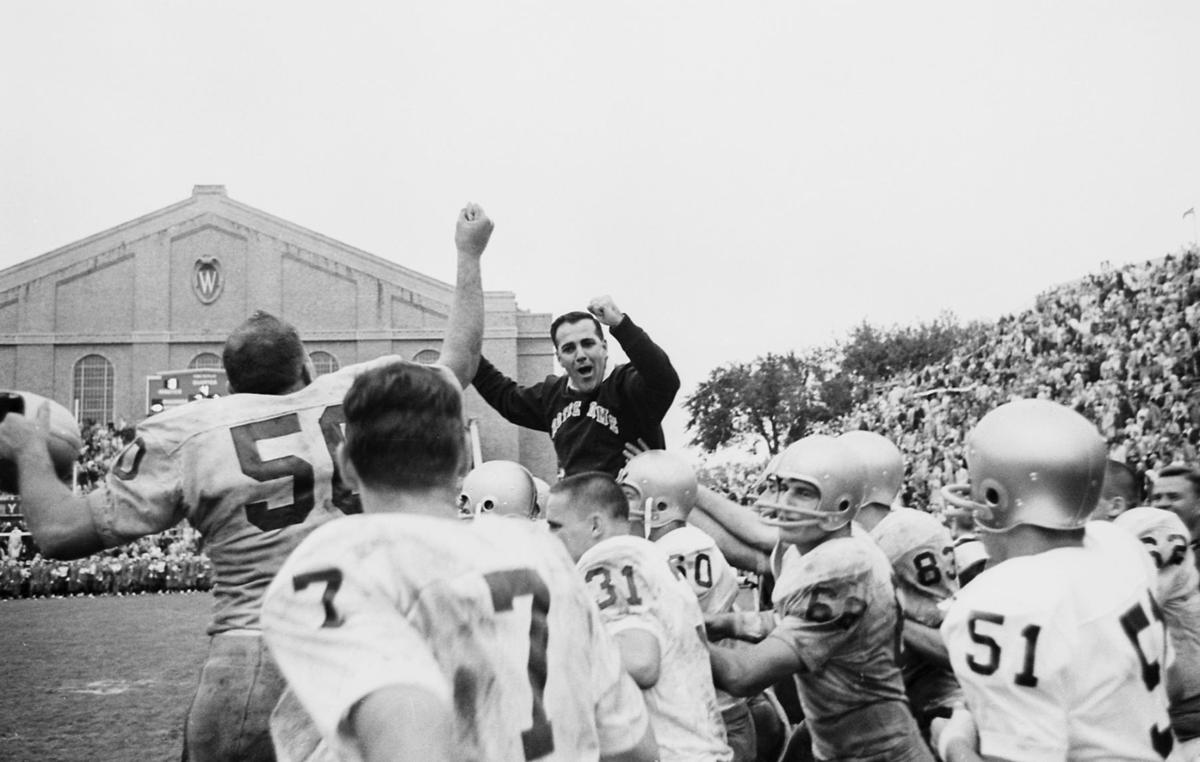 In this Sept. 26, 1964, file photo, Notre Dame coach Ara Parseghian celebrates his first victory with the school as he is carried on the shoulders of his players after their 31-7 victory over Wisconsin in Madison, Wis. Parseghian died Wednesday at his home in Granger, Ind. he was 94. 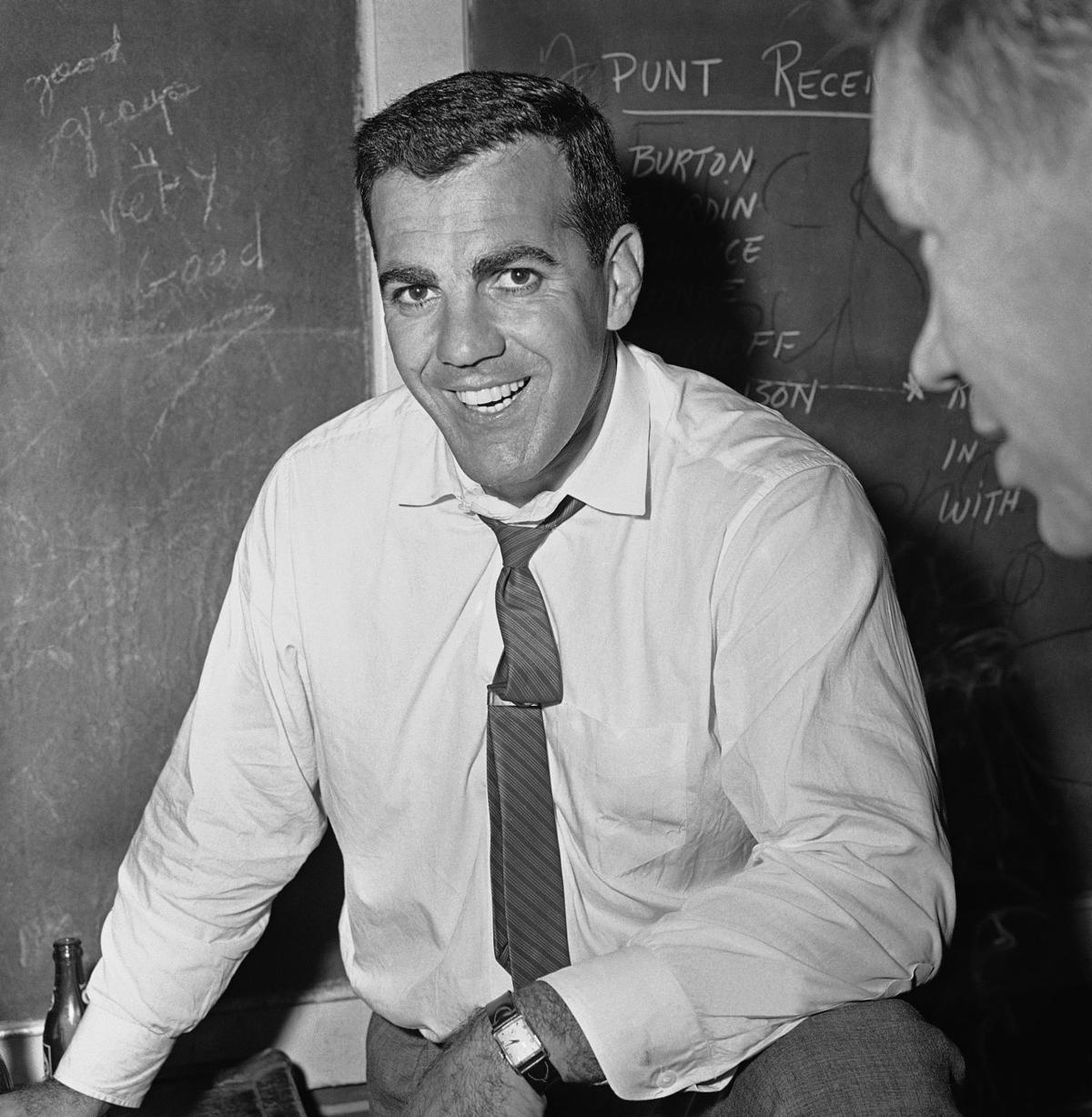 In this Oct. 3, 1959, file photo, Northwestern coach Ara Parseghian is shown in a locker room in Iowa City. Parseghian took over a foundering Notre Dame football program and restored it to glory with two national championships in 11 seasons.

Ara Parseghian reached the pinnacle of his profession at Notre Dame and endured the most painful personal losses as a father and grandfather.

He walked away from coaching at the age of 51 after winning two national championships, but never really left Notre Dame. He built a legacy through philanthropy that he hoped would be far more meaningful than any of his many victories.

Parseghian died Wednesday at his home in Granger, Indiana, where he lived with Katie Parseghian, his wife of 68 years. He was 94.

Parseghian had recently returned home after spending more than a week in a nursing care facility in South Bend, Indiana. He was treated for an infection in his surgically repaired hip, and was still receiving round-the-clock care at home.

“Among his many accomplishments, we will remember him above all as a teacher, leader and mentor who brought out the very best in his players, on and off the field,” Notre Dame President Rev. John Jenkins said in statement. “He continued to demonstrate that leadership by raising millions of research dollars seeking a cure for the terrible disease that took the lives of three of his grandchildren. Whenever we asked for Ara’s help at Notre Dame, he was there.”

Parseghian took over at Notre Dame in 1964 when the Fighting Irish were down. They hadn’t had a winning season in five years and had gone 2-7 in 1963. He quickly restored the Golden Dome’s luster and led the Irish to national titles in 1966 and 1973. He abruptly retired after the 1974 season, saying he was worn out and ready for a change. Despite offers from other colleges and NFL teams he never returned to coaching.

“When you find any successful coach there’s always a portion of the players who didn’t like him. From the top All-American to the guy who never got to see the field, everybody loved Ara,” former Notre Dame quarterback Terry Hanratty said. “That’s a really great human being.”

Former Northwestern captain and center Jay Robertson recalled Parseghian’s attention to detail, and how he would get down on his hands and knees to coach the quarterbacks on how to properly take a snap.

“That great desire that he had to win and to do everything perfect did not include anything that would embarrass himself or the team or the university,” Robertson said. “I don’t remember ever him preaching to us about anything. He just lived it and we followed it.”

Parseghian didn’t just revive Notre Dame football. He made Fighting Irish fans believe in the program again. He began his tenure in South Bend with an impromptu pep rally that drew 2,000 students to the steps of a residence hall and eventually persuaded Notre Dame to end its longstanding policy against playing in bowl games.

Parseghian was so beloved by students that when the weather turned bad, chants of “Ara, stop the rain!” or “Ara, stop the snow” cascaded down from the grandstands.

“As a student, I enjoyed the thrill of being on campus for Ara’s last three years as head coach, including the 1973 championship, and saw firsthand the profound impact that he had on my classmates who played for him,” Notre Dame athletic director Jack Swarbrick said in a statement. “When I returned many years later as athletics director, Ara was unfailingly generous with his time, and his counsel proved to be invaluable.”

After stepping down, Parseghian went into television and spent more than a decade calling games on ABC and CBS.

In 1994, his family was hit with devastating news. Three of his son Mike’s children were found to have Niemann-Pick disease type C. Parseghian helped create the Ara Parseghian Medical Foundation in response.

“When I first started out, I wanted a silver bullet,” Parseghian told the South Bend Tribune in 2016. “I wanted that cure that could help the children immediately. But research doesn’t work that way. You’ve got to go step by step by step.”

He already had been active in the National Multiple Sclerosis Society after his daughter, Karan, was diagnosed decades earlier.

The Parseghians lost three grandchildren between the ages of 9-16 to Niemann-Pick disease from 1997-2005. The foundation has raised more than $45 million for research on the disease.

“As you move through life, it’s not going to be a bright sunshiny day every day. You’re going to have disappointments. But how you handle those disappointments is the important thing for you and everybody that’s around you. That’s what I found from being not only a player, but also a coach,” Parseghian said in 2012, when he was honored by the National College Football Awards Association.

He received an honorary doctorate from Notre Dame in 1997. In 1980, he was inducted into the College Football Hall of Fame. In 2007, Notre Dame unveiled a statue of Parseghian outside Notre Dame Stadium.

On the field, a tie was probably his most famous game.

In a matchup dubbed the Game of the Century, No. 1 Notre Dame tied No. 2 Michigan State 10-10 in 1966 and went on to win the national title. Decades later Parseghian would still bristle over suggestions he was too conservative at the end of the game. He would joke with his players that the result made them famous forever.

“Ara always said I tied the game just to keep you guys name in the paper all these years,” Hanratty said. “Think about it, had somebody won, five years later nobody would have remembered it.”

Parseghian, who was born in Akron, Ohio, and served in the Navy, went 36-35-1 at Northwestern, including 4-0 against Notre Dame, and 39-6-1 in five seasons at Miami of Ohio. At Miami, Parseghian played under the innovative Sid Gillman. With the Cleveland Browns in 1948-49, he played for Paul Brown until an injury ended his playing career. His first coaching job was as an assistant to Woody Hayes at Miami.

Later in life, Parseghian spent his winters in Florida and the rest of the year in the South Bend area, watching the Irish closely. Notre Dame coach Brian Kelly called Parseghian a mentor and a friend.

“I’ll forever cherish the hand-written letters of encouragement, wisdom and advice that he’s sent throughout my tenure at Notre Dame,” Kelly said in a statement. “I’ll always keep them close to me.”

Parseghian often tailgated before games outside Notre Dame Stadium, and then went home to watch the game on TV. He was worried that people at the stadium might misinterpret his reactions. And he wanted to watch the game without being interrupted.

For John Tschida, Saint Mary's was an opportunity he couldn't pass up

John Tschida has had his pick of career opportunities.

The COVID-19 pandemic interrupted several promising sports campaigns in 2020. So many championship dreams cut short. So many farewell seasons …

A familiar face will be back in the dugout for the Saint Mary’s softball team.

Platteville, Wis. — University of Wisconsin-Platteville track and field senior Alex Walechka found himself in an odd position when the NCAA sh…

Lexy Ramler isn’t quite ready to be done with her collegiate career just yet.

College basketball players are transferring at a record rate. What does it mean for the sport?

It began as an idea, a hopeful notion that might one day become something more.

Patrick Baldwin Jr., one of the nation’s top recruits, announced Wednesday that he will stay in his home state and play for his father at Milwaukee.

Winona State football coach Tom Sawyer has announced he will retire from coaching at the conclusion of the 2021 fall football season.

In this Sept. 26, 1964, file photo, Notre Dame coach Ara Parseghian celebrates his first victory with the school as he is carried on the shoulders of his players after their 31-7 victory over Wisconsin in Madison, Wis. Parseghian died Wednesday at his home in Granger, Ind. he was 94.

In this Oct. 3, 1959, file photo, Northwestern coach Ara Parseghian is shown in a locker room in Iowa City. Parseghian took over a foundering Notre Dame football program and restored it to glory with two national championships in 11 seasons.