Gophers athletic director Mark Coyle can’t talk about the effect of COVID-19 on his department’s financial health in concrete terms because he can’t see the finish line. He just knows things will be painful.

Best-case scenario is a $14 million projected loss in revenue in 2020-21. The “moderate” scenario calculates a loss of $30 million if sports return in the fall without fans, or if there is a shortened season.

Rhonda McFarland, chief financial officer of Gophers athletics, didn’t sugarcoat that scenario Friday when addressing the Board of Regents.

“There are only a handful of athletic departments that could manage a $30 million loss,” McFarland said.

Minnesota isn’t one of them.

They, like just about every other FBS school, desperately need a fall football season with fans in the stands. The “or else” part is a path ADs would rather not explore.

Asked Friday if his senior staff has had much discussion on whether the department can continue to support 25 sports considering revenue losses, Coyle didn’t say yes or no. He emphasized the success of his broad-based program but left the door open to any possibility.

“There’s no doubt that everything is on the table,” Coyle said.

No AD wants to cut sports. That draconian measure already has started elsewhere with Cincinnati dropping men’s soccer and Old Dominion eliminating wrestling because of the pandemic. They won’t be alone, especially if the football season gets disrupted.

This crisis seems to shift by the day, so predicting with any certainty how things will look by June even is nearly impossible. And with 130 FBS schools spread over 10 conferences, plus independents, we’ll see schools opening for business on different timelines. We can talk ourselves in circles going over every possible football scenario.

What’s clear though is that mounting revenue loss will force athletic departments to make the decisions they fear the most. Do they maintain their same number of sports but reduce spending by squeezing budgets across the board? Or do they make the tough choice of eliminating some nonrevenue sports?

For now, Coyle’s plan is to cut costs by enacting pay reductions and budget trims of 10% to 15% per sport, among other measures. And every program should make sacrifices. But this gets tricky for Coyle because football is a cash cow that supports other sports. The Gophers can’t afford to weaken that operation, considering all the momentum P.J. Fleck has generated with an 11-win season, recruiting successes and the program’s growth potential as a revenue source.

How football goes, so go Coyle’s budget and budget decisions.

In all college sports, scheduling and travel will change. The Gophers spend $2.6 million more now on team travel annually compared to 2012. Some of that is unavoidable. Traveling is generally more expensive, the Big Ten’s footprint expanded with the addition of Rutgers and Maryland and the move to Big Ten hockey brought added costs.

However, the days of sending the softball team to Hawaii for nonconference games might be over, for now at least.

This season, the softball team — with travel expenses of $450,000 — made road trips to Florida (twice), Texas, Alabama, California and Hawaii. The program reported operating revenue of $177,000 in the 2019 fiscal year.

Scheduling more regional opponents in nonconference is a logical step. Teams also could bus instead of fly when possible. Or schedule fewer games.

The NCAA requires a minimum number of games each team must play to count as a sponsored sport. For instance, the minimum for baseball and softball is 27. Soccer is 11.

The Gophers softball team had played 25 nonconference games before the season was shut down. They had 54 regular-season games scheduled, counting Big Ten season. Trimming the schedule to lower expenses is a reasonable compromise.

Coaches will argue that playing a full, competitive schedule helps recruiting and in building a successful program. No one would deny that under normal circumstances. Schools are not operating under normal parameters.

This financial punch will be substantial. Don’t think the U should cut sports? Then you should root for the Gophers to rewrite today’s rules about how their 25 teams operate.

Every week is about the same for Max Meyer these days: Monday through Friday, the Gophers’ pitching star and soon-to-be first-round draft pick…

Why Gophers football has a top-10 recruiting class

Tens of billions of dollars on the line as pro and college sports look to return, with or without fans

At some point, the conversations turn to money.

Ritter was Minnesota's ace in the circle in the early 2000s and has been Minnesota's pitching coach since 2008.

John Clay: The NCAA is finally acting on the FBI college basketball investigation

Never mind those stay-at-home orders, the NCAA has been making news. Basketball news. Infractions committee news. The Indianapolis enforcers are finally following up on the FBI's college basketball corruption scandal in 2017. Notice of allegations have been issued. Some responses have been made. More of both are sure to come. So, updates: - Louisville: U of L received its notice of allegations ...

More and more, it looks like the ramp-up to what officials hope is a full college football season will begin in mid-July. Yahoo Sports reported last week that the NCAA Division I football oversight committee was leaning toward a six-week preseason camp, about two weeks longer than the normal beginning to the season. NCAA approval could come the middle of this month, according to Yahoo. The ... 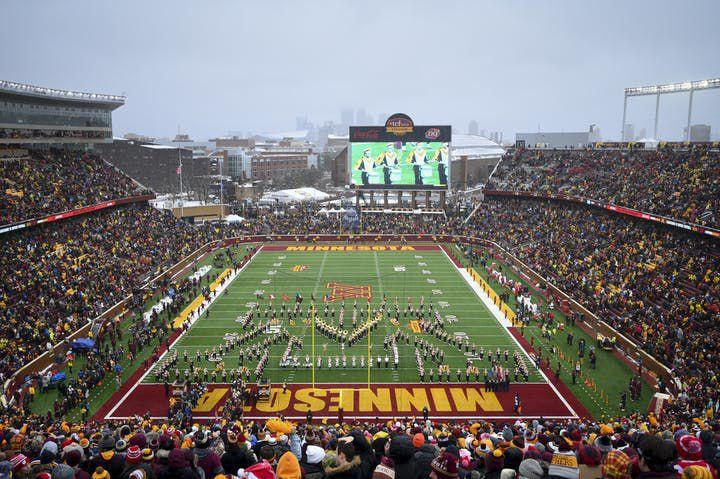 TCF Bank Stadium during a game against Wisconsin last season. The COVID-19 pandemic will affect college athletic budgets across the country.