MINNEAPOLIS — Wisconsin linebacker Chris Orr stood on the field at Camp Randall Stadium on Saturday — the spot where Minnesota beat the Badgers 37-15 last November — and attached a possessive to a coveted item.

“We need as many of y’all up there in Minnesota, and we’re going to get our Axe back,” Orr said into a mic after a 45-24 win over Purdue on Senior Day in Madison.

The 10th-ranked Gophers (10-1, 7-1 Big Ten) will face the 12th-ranked Badgers (9-2, 6-2) for the rights to not just their 6-foot wooden rivalry trophy but also the Big Ten West Division crown and a spot in the conference championship game Dec. 7 in Indianapolis.

That was before the Gophers put together this historic season in 2019 and after they added some of their own fodder in preseason. At the Big Ten kickoff luncheon in July, Gophers coach P.J. Fleck said the Wisconsin rivalry was “healthy” again.

Although that statement seems pretty innocuous, Baidasz showed some indigestion to that fact minutes after eating a catered meal with the rest of the conference in a Chicago hotel ballroom.

“We’re not going to focus on Minnesota because we lost the Axe,” Baidasz said unprovoked to start his afternoon media session.

But now Wisconsin’s complete focus is on Minnesota and vice versa.

Fleck has tried hit pause to reflect on how special this season has been for Minnesota. He did it in Evanston, Ill., after Minnesota’s 38-22 win over Northwestern on Saturday and again on WCCO-AM on Sunday.

“Who could have asked for something better?” he asked on the radio. “That’s what is so fun about this. You got one of the biggest rivalries in college football on Saturday, (ESPN’s) ‘College GameDay’ coming to the Twin City area, you have two ranked opponents and you are playing for the Big Ten West Championship to go to Indy and possibly the Rose Bowl” or maybe a College Football Playoff berth.

The matchup on the field is enticing, with the Badgers’ and Gophers’ scoring offenses and defenses all within the top 30 in the nation. The Gophers are four-point home underdogs, according to Sunday’s early betting lines, and have lost seven straight at home to Wisconsin since playing in the Metrodome in 2003.

But for the beginning of this week, Orr’s words have been most most enthralling. After his on-field comments, he didn’t back down in postgame interviews when asked about the prospect of the Gophers using his words for motivation this week.

Uncertainty builds for fall sports in MIAC, NSIC during pandemic

As NCAA Division I football leaders continue pushing to open on schedule this fall, returning to play isn’t a given for Division II and III teams.

Teams will only play NSIC opponents.

Who gets to watch? U football builds contingency plans for ticket holders

The Gophers still hope football attendance reaches 100% capacity at TCF Bank Stadium this fall, but with the COVID-19 pandemic, “the reality o… 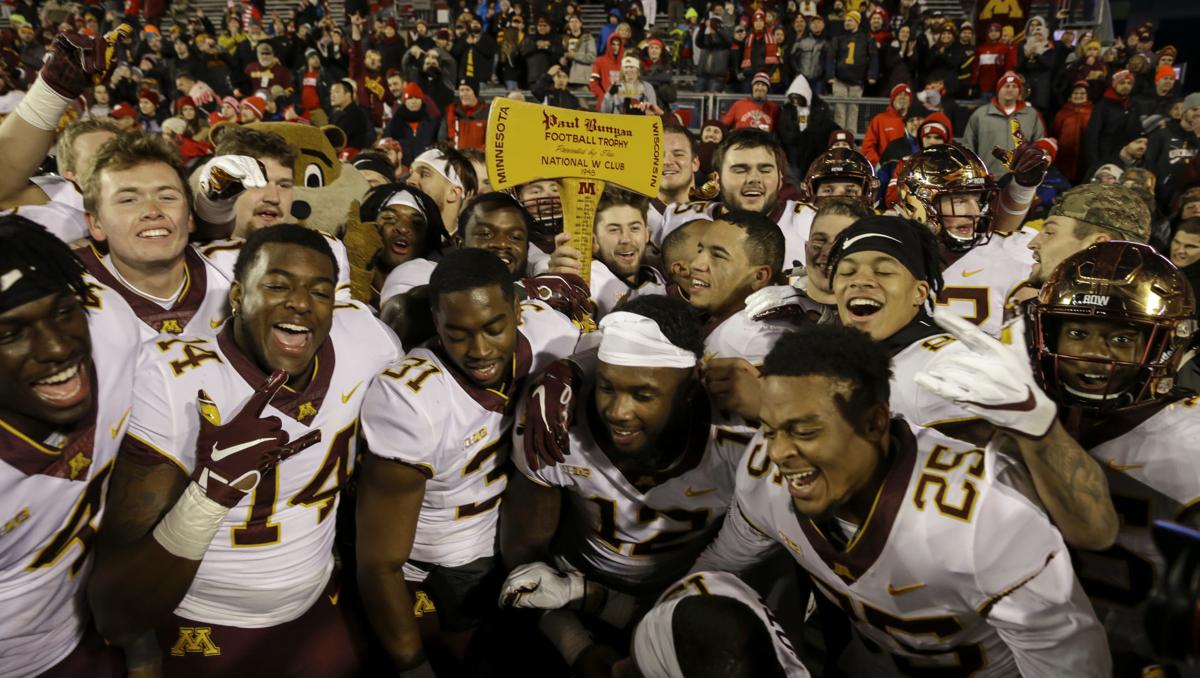 Minnesota players celebrate with the Paul Bunyan Axe trophy in 2018.