Pieces of the past

Lost Winona: Sites then and now

Lost Winona: Sites then and now

THROWBACK THURSDAY: What's that rolling down the Mississippi?

THROWBACK THURSDAY: What's that rolling down the Mississippi?

THROWBACK THURSDAY: The Gorilla Man and Sheriff King
The ‘boat that don’t float’ had a checkered history
0 comments
Share this
{{featured_button_text}}
1 of 4 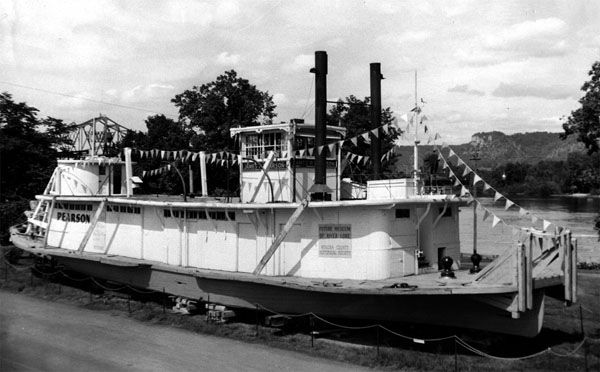 The Pearson in Levee Park decorated for Steamboat Days in 1957, would later get gingerbread and become the Wilkie. (Photo courtesy of the Winona County Historical Society) 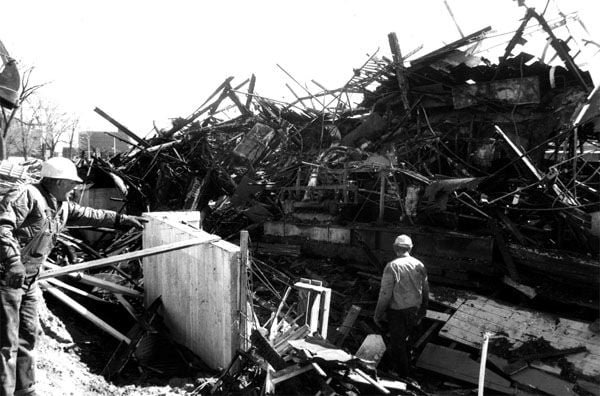 Wreckage of the Wilkie after the fire in 1981. (Photo courtesy of the Winona County Historical Society) 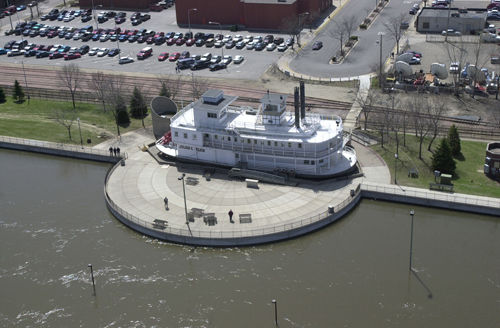 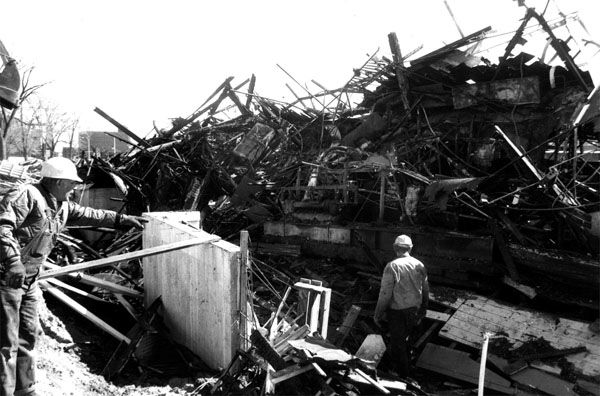 By Erin Christenson & Mark Somemerhauser For the Winona Daily News

Although wags may brand the replica Julius C. Wilkie as Winona’s “Boat that don’t float”, its predecessor had a reputation for being one of the busiest steamboats on the upper Mississippi River.

The boat-shaped building that stands on its concrete foundation at the foot of Main Street is the third incarnation of a boat that began as a working river tug — the James P. Pearson.

Reconstruction lasted from the fall of 1936 to the spring of 1938, and by the start of the 1938 shipping season, the boat, rechristened the James P. Pearson II, was ready to begin operations, running six days a week, eight months a year, on the 289-mile stretch between Moline to Dozier Slough.

As the years went by, that began to change, and by the mid-’50s the James P. Pearson II was practically a relic.

Diesel engines were more economical than the old coal-burning steamers, and it became apparent that it was only a matter of time before the boat would be scrapped.

The president of the Winona County Historical Society, Dr. Lewis Younger, learned the Pearson might be available.

Aware of the boat’s significance as the only woodenhulled steamboat still in existence, he orchestrated the acquisition of the Pearson by the society.

In 1956, the boat moved upriver to Winona and was hauled ashore to be put on permanent display.

The Wilkie Bros. Foundation of Des Plaines, Ill., funded complete refurbishment, including the addition of a second-level cabin row with a pilothouse on the very top.

The remodeled workboat, now done up in gingerbread and foofraw, was renamed the Julius C. Wilkie in honor of its benefactor.

The boat was operated as a steamboat museum, not only displaying the workings of a real riverboat but also housing a collection of riverboat memorabilia.

Rising flood waters threatened to float the Wilkie off its foundations.

It remained in place only after holes were cut in the hull, allowing it to flood.

On March 12, 1981, the Wilkie succumbed to the fate of one in three steamboats ever built.

An uncontrollable fire leveled it the middle of the night.

Arson was widely suspected and almost everyone seemed to be a suspect at one point or another: hitchhikers, workmen, even a Winona State students whose uncle — later accused of having “psychological issues”— sent a postcard to the police claiming he knew his nephew did it.

Investigators later pinpointed the rear hull as the origin and followed the fire’s path without finding any evidence to support the arson theory, and the case was closed.

Winonans, undeterred, vowed not to be without a Wilkie for long. Less than seven months after the fire, supporters raised more than $200,000 to build a new boat - an outpouring of support that benefactor Leighton Wilkie dubbed "a miracle." Leighton Wilkie, whose family funded the restoration of the original Wilkie, donated $200,000 toward the new boat.

The still-uncompleted structure opened March 4, 1983 to much fanfare. But despite sunny revenue projections, the boat lost money two of its first three years in operation - all while being managed by three different groups in its first four years.

The third managerial group, Marlene Kohner and Carole Nelson, appeared to have the Wilkie on sound financial footing by 1988, when they predicted 10,000 visitors would tour the boat.

The Wilkie's early demise was foreshadowed later that year, when Mayor Earl Laufenburger acknowledged the boat's roof had leaked "from Day One." A Wilkie board member acknowledged the boat's wood already was rotting - a situation he called "embarrassing." Then, in 1991, a 12-year-old Winona boy suffered minor injuries after falling from the Wilkie's second-story deck. The boy had been leaning on a rotting piece of railing that collapsed.

The Wilkie's never-say-die supporters held telethons, auctions and other events to raise money for repairs. Things seemed to be looking up in 1991, when the city loaned $63,000 to the Wilkie Board of Directors to repair the boat.

Then, in 1995, Winona businessman Paul Sweazey became chairman of the Wilkie board. Sweazey's secretive style alienated other board members and local leaders. By 2001, the Wilkie hosted just 1,700 visitors.

The city deemed the structure unsafe in June 2006 and closed it to the public. The Wilkie's lease for its site in Levee Park expired in November 2006, triggering 18 months of debate over what to do with some of Winona's choicest real estate.

The city council originally gave Wilkie supporters a year to raise the nearly $500,000 needed to repair and reopen the boat. But the council cut that effort short in summer 2007, and after months of waffling, finally voted to raze the boat in early 2008.

On July 9 the boat-shaped building on the levee was reduced to kindling and hauled away.

Just before the demolition, one of the Wilkie's most ardent supporters, Roxy Kohner, said the site was her personal place of reflection and solace.

"You can sit there, and it transports you back to a simpler time," Kohner said. "You could be riding up the river without a care in the world."

This story was originally published in 2001, as part of our History and Heritage sesquicentennial section.

The Pearson in Levee Park decorated for Steamboat Days in 1957, would later get gingerbread and become the Wilkie. (Photo courtesy of the Winona County Historical Society)

Wreckage of the Wilkie after the fire in 1981. (Photo courtesy of the Winona County Historical Society)