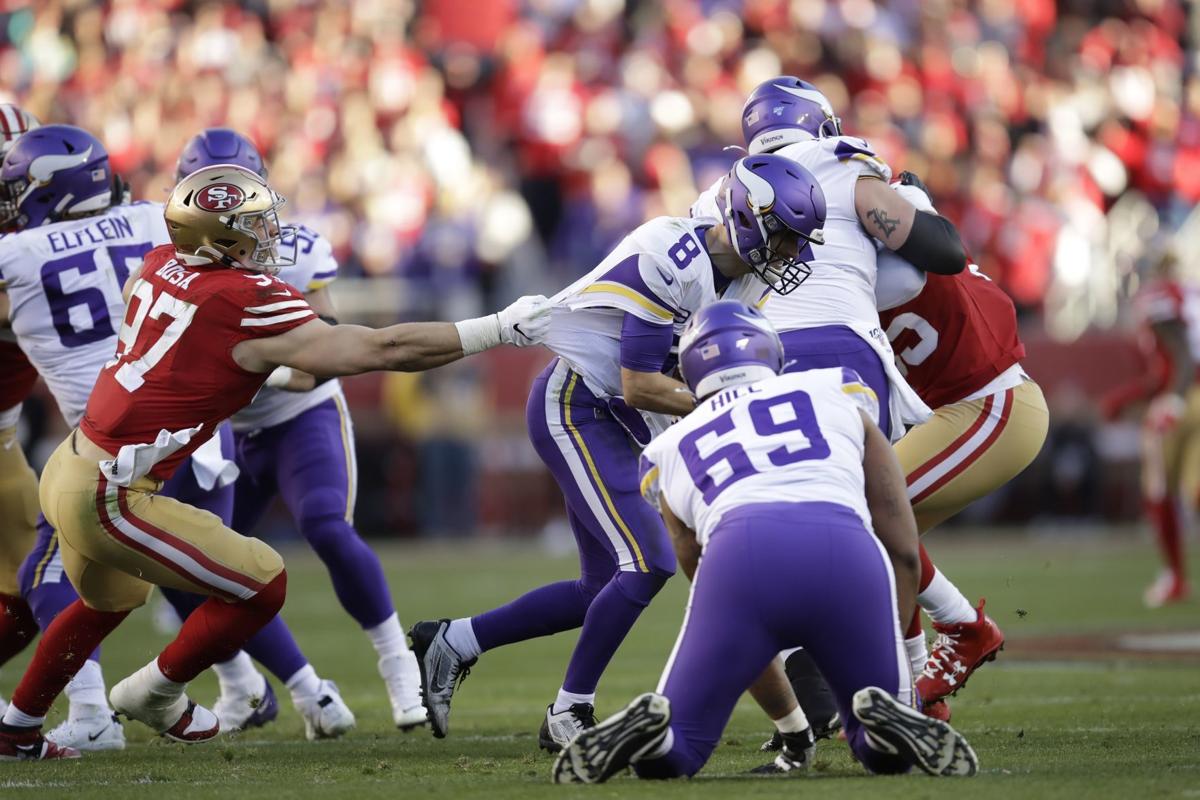 San Francisco 49ers defensive end Nick Bosa (97) grabs the jersey of Minnesota Vikings quarterback Kirk Cousins (8) during the second half of Saturday's game. Cousins was pressured on 17 of his 35 dropbacks.

San Francisco 49ers defensive end Nick Bosa (97) grabs the jersey of Minnesota Vikings quarterback Kirk Cousins (8) during the second half of Saturday's game. Cousins was pressured on 17 of his 35 dropbacks.

SANTA CLARA, Calif. — Vikings defensive end Everson Griffen was only a couple questions into his postgame media session in the visiting locker room at Levi’s Stadium on Saturday when he was asked about his emotions after the team’s 27-10 playoff loss to the 49ers.

“It’s tough. We never want it to end this way, and we’ve just gotta — I don’t know. I’m done, man,” the 10-year veteran said before ending the interview.

For the 10 teams that make the playoffs and fail to reach the Super Bowl, the ends of seasons always have a sharp abruptness to them. One day, they’re preparing for a playoff game that could bring them a step closer to their ultimate goal; the next, players are cleaning out their lockers and making travel arrangement they hoped not to need yet. But even by those standards, the Vikings’ loss on Saturday felt like it could represent a page being turned.

A defense that has prided itself on continuity could be headed for significant changes, with Griffen, defensive tackle Linval Joseph and cornerback Xavier Rhodes all set to be at least 30 by the start of next season and playing on contracts that carry cap numbers of at least $12.9 million next season. A team that’s tight on cap space also has to make decisions on 31-year-old left tackle Riley Reiff and 30-year-old tight end Kyle Rudolph, while determining the efficacy of contract extensions for quarterback Kirk Cousins, running back Dalvin Cook and safety Anthony Harris (who will be an unrestricted free agent after finishing tied for the league lead with six interceptions).

Changes to their coaching staff had already begun by 9 a.m. on Sunday, less than eight hours after the Vikings touched down at Minneapolis-St. Paul International Airport wit the Cleveland Browns having hired offensive coordinator Kevin Stefanski as their next head coach, a year after making him a finalist for the job they gave to Freddie Kitchens.

The Vikings will be looking for their fifth offensive coordinator in as many years; they could give play-calling duties to assistant head coach Gary Kubiak or quarterbacks coach Klint Kubiak, though Stefanski’s relationship with both men could force the Vikings to block one or both if they get offers to join him in Cleveland. One NFL source named assistants who have worked with Stefanski for six years, like defensive coordinator George Edwards, wide receivers coach Drew Petzing or defensive backs coach Jerry Gray, as possible options to follow him.

And while co-owner Mark Wilf issued a statement before the Vikings’ first playoff game that ownership hopes to keep coach Mike Zimmer and general manager Rick Spielman in place for years to come, there’s business to be done with both men, who each have deals that expire after the 2020 season.

Beyond the shifting personnel, the Vikings have to ask themselves a fundamental question: Assuming they’re committed to their current approach, do they have the personnel to carry it out effectively?

The continuity they’ve enjoyed on defense — with players able to make rapid-fire adjustments or effectively hold blitz disguises until the final second — could be disrupted if the Vikings opt to move on from several longtime starters. New players might bring a fresh dose of athletic ability, but could also have growing pains as they get used to the scheme.

If that’s the case, can the Vikings count on their ability to win games with a stout defense? And can an organization that made no secret of its desire to run the ball behind heavy personnel groups win in the playoffs without another set of upgrades to its offensive line?

Losses to Chicago, Kansas City and Green Bay this season were marked by the Vikings getting whipped up front, and the lopsided nature of Saturday’s loss owed plenty to the 49ers’ physicality on both lines of scrimmage. In the locker room after the game, player after player summed up the defeat in the same succinct terms: “We just got beat.”

The Vikings appear to have a keeper in right tackle Brian O’Neill, and they’ll hope for more out of first-round pick Garrett Bradbury in the center’s second season. But Pat Elflein gave up six sacks (according to Pro Football Focus) in his first year at left guard, and the Vikings’ interior line struggled to win against the better defensive fronts it faced in a season that ended with the team rushing for just 21 yards on Saturday.

According to ESPN’s Pass Block Win Rate metric, the Vikings had the 26th-best line in the league this season, holding blocks for more than 2.5 seconds on passing plays just 37 % of the time. As much consternation as there was about Cousins’ lack of downfield attempts against the 49ers, the quarterback was under pressure on 17 of his 35 dropbacks on Saturday (despite the 49ers bringing extra pressure just six times). It’s tough to expect him to frequently work downfield when he’s under such consistent pressure — and it’s simply not reasonable to expect Cousins, at age 31, to suddenly find the mobility and verve to consistently make plays when things are breaking down.

The Vikings had enough talent and discipline to make the playoffs for the third time in five years this year, and they could have plenty of it next year, as well. Within a relatively stable structure (not to mention a top-loaded payroll), though, can they transform themselves into a group capable of winning multiple playoff games for the first time since 1987?

That’s the question that figures to animate much of an eventful offseason for the Vikings. And after Saturday’s loss in San Francisco, it appeared to be the toughest one to answer of them all.

“That’s great to talk about it or say, ‘We just need to do this better or that better,’ but now we have to go do it,” wide receiver Adam Thielen said. “We’re to the point now where we know we can be contenders. But we have to go prove it every single week.”