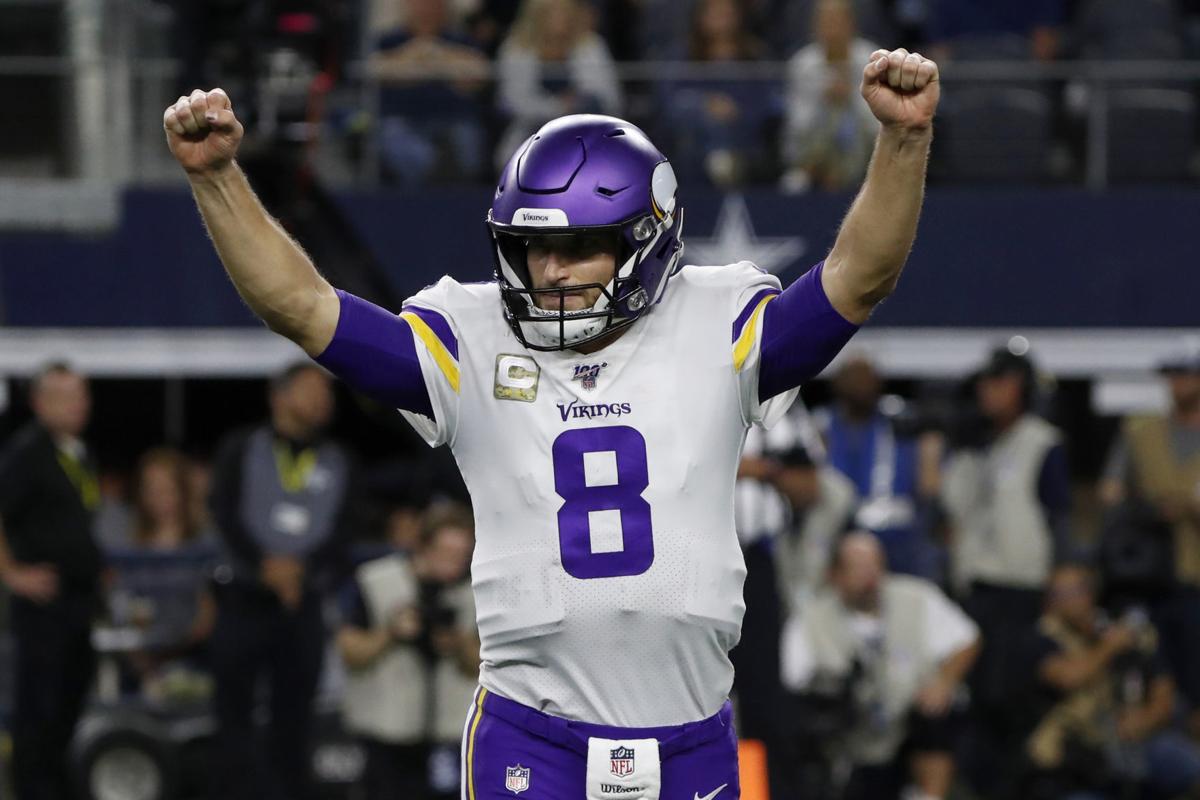 Minnesota Vikings' Kirk Cousins celebrates in the second half during the Vikings 28-24 victory over Dallas. After Green Bay's loss to San Francisco, the Vikings and Seahawks matchup will have plenty of playoff implications.

Minnesota Vikings' Kirk Cousins celebrates in the second half during the Vikings 28-24 victory over Dallas. After Green Bay's loss to San Francisco, the Vikings and Seahawks matchup will have plenty of playoff implications.

EAGAN, Minn. — The Vikings woke up Monday morning still scattered across the country, a day before players return from their bye week and begin preparation for next Monday’s game in Seattle. Their chances to win the division are now in their control, by virtue of what happened on Sunday night in the Bay Area.

The Packers’ 37-8 loss to the 49ers — their second in three weeks on the West Coast — dropped them to 8-3 and put them in a tie with the Vikings for the NFC North lead. The Vikings, who play host to Green Bay in a Monday night matchup on Dec. 23, only need to beat the Packers for the fourth straight year at U.S. Bank Stadium and match them the rest of the way to win the division title.

It’s the Vikings’ upcoming task, however, that might have the most to say about their division title chances.

Their assignment against the Seahawks is no easy task for a number of reasons. They’ll face a 9-2 team that’s beaten them five straight times (and hasn’t allowed them to score more than nine points since 2013). They’ll play on the West Coast at night (historically a daunting proposition), and face Seahawks quarterback Russell Wilson, a MVP candidate who’s tormented the Vikings like few others.

Unless they’re able to win at CenturyLink Field for the first time since 2006, the Vikings could again find themselves in the position of needing help from an underwhelming set of Packers opponents if they want to win the division.

Green Bay’s next two games are on the road against the 2-9 Giants and at home against the 2-9 Redskins. The Packers play the Bears at home on Dec. 15, and finish the season against the Lions in Detroit after playing the Vikings on Dec. 23. They also still hold an advantage in the NFC North because of their division record; they’ve beaten all three teams in the North, while the Vikings are 1-2 in the division so far (including a Week 2 loss in Green Bay).

That means if the Vikings lose to Seattle, they’d need to win their last four (including a home victory against the Packers), and hope Green Bay drops another game to fall to 11-5. If the Vikings were to lose more than one of their last five and still end up with the same record as the Packers, the only way they can claim a division title is with Green Bay losing a second division game (to either the Bears or Lions), which would then give Minnesota the NFC North crown based on their record against common opponents (the Vikings’ Week 6 win over the Eagles, who beat the Packers at Lambeau Field in Week 4, would be huge here).

The Vikings also need to be somewhat concerned with the Rams, who have the potential to affect the NFC playoff race if they get hot down the stretch. Los Angeles played host to Baltimore on Monday night, but has two more games against the Cardinals and gets Seattle at home in Week 14. They’d likely need to finish with a better record than the Vikings to keep them out of the playoffs, since they’ve lost one more NFC game than the Vikings have, but the defending conference champions could be a factor in the final five weeks if they beat the Ravens at home on Monday night.

The Vikings have a home game against the Lions on Dec. 8, and they’re likely crossing their fingers the NFL moves their Dec. 15 game against the 4-7 Chargers out of the Sunday night spot, so they can avoid playing two nighttime West Coast games in three weeks. They get the Bears in Week 17 at home, and could be playing a team with little to fight for (though the Bears have beaten the Vikings in their last three meetings).

If they’re able to win in Seattle, though, they’d deliver a resounding message about their ability to beat any team, anywhere, and keep themselves in position to deliver a haymaker to the Packers at U.S. Bank Stadium in Week 16.

What should be a riveting December for the Vikings gets off to an intriguing start next Monday night.