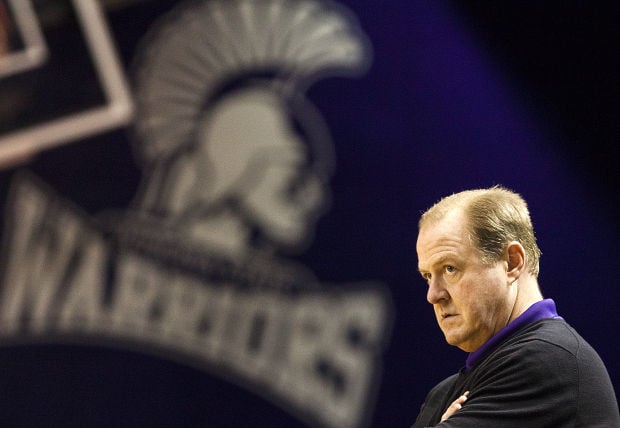 Winona State coach Mike Leaf looks on during a game against Minnesota State-Mankato earlier this season. The Warriors, who missed an opportunity to win an NSIC regular-season title, begin conference tournament play at 7 p.m. Wednesday. 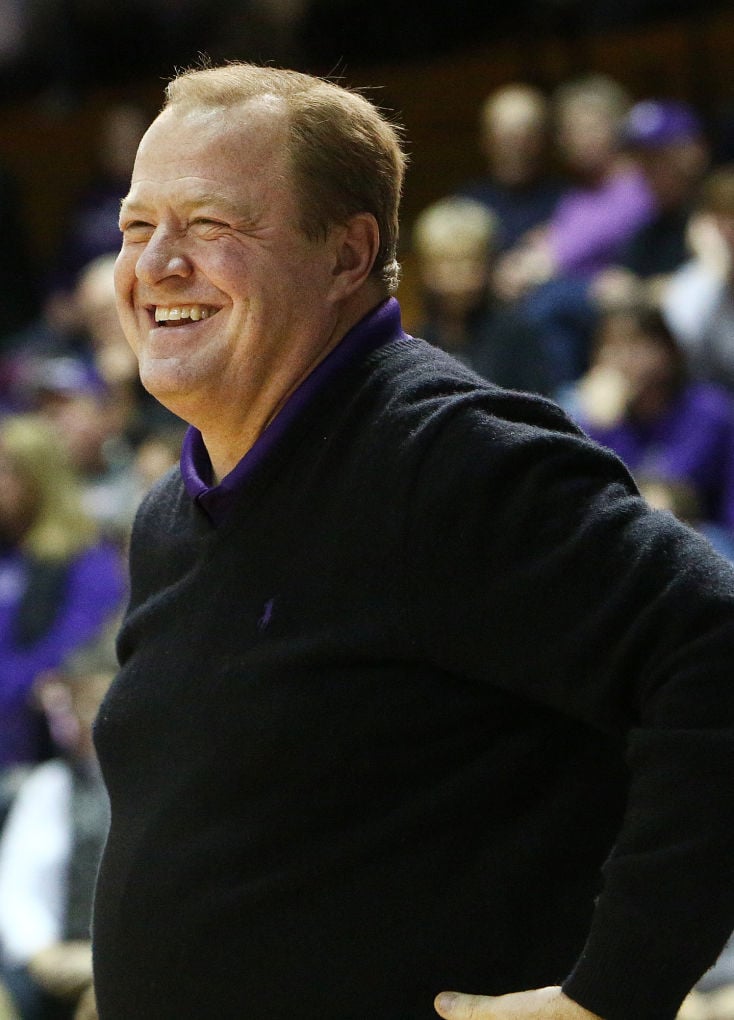 Winona State University head coach Mike Leaf has a laugh with an official Monday, Nov. 3, 2014, during an exhibition game against UW-Eau Claire at McCown Gymnasium in Winona. 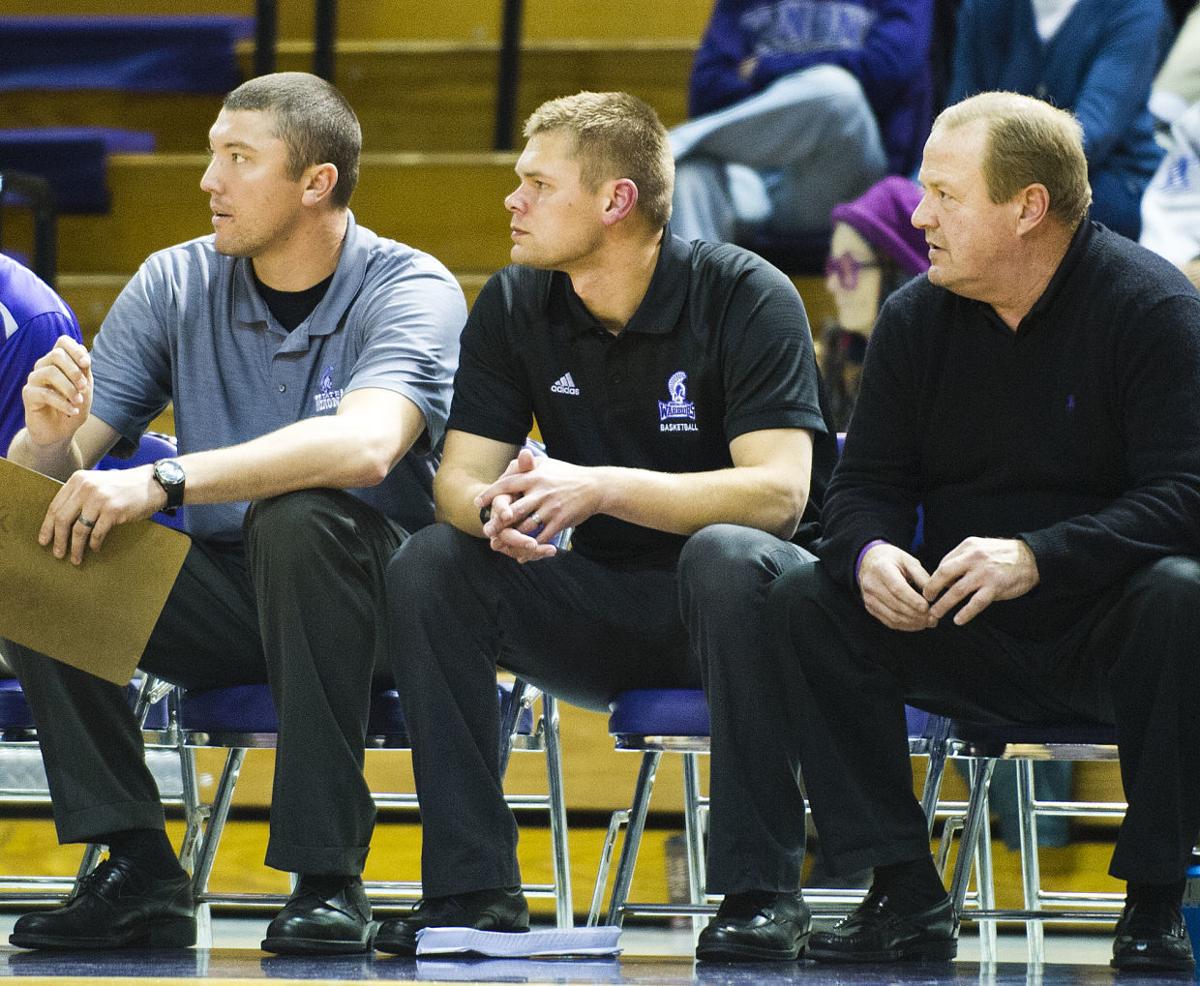 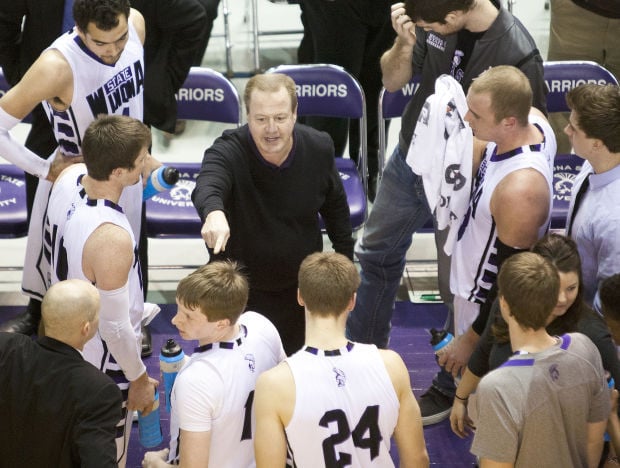 Mike Leaf says it’s time for someone else to run the show.

“I have shed a lot of tears over the last week,” Leaf said in a phone interview. “If you’re leaving something you love, at least you know you loved it, but it still makes it difficult. At the same time, things change, and it’s time for someone else to step in.

“I’ll never forget, one of my older brothers said if you’re not going to give someone your full heart and 110 percent, you shouldn’t do it at all.”

Leaf, 54, spent nearly three decades with the team, first as an assistant coach and then as the head coach for the past 17 years. He took the Warriors to a pair of Division II national championships in 2006 and 2008, and set a Division II record with 57 straight wins between January 2006 and March 2007. In his 17 seasons, the team had a winning record for 16 of them.

His resignation takes effect June 30, WSU said in a statement Friday. Assistant coach Zach Malvik, a former player under Leaf, will take over management of the team until a national search can be conducted.

Leaf said he hopes Malvik, 31, will be named the permanent coach.

“Twenty-eight years of my life have been at Winona State,” Leaf said. “It’s time for someone to step in there and take it to another level.”

Leaf also guided the team to the national Elite Eight finals in both 2007 and 2013, barely missing out on a third championship in 2007 in a wild game against Barton College. Leaf established a consistent winning culture with the team, leading the Warriors to 10 NCAA Tournament postseason appearances.

But it was being around the players that meant the most to him.

“I just love Winona State,” he said. “Our players are the greatest guys ever. They are great citizens. They graduated.

He plans to be one of the Warriors’ biggest fans going forward.

“I’m not going to interfere,” he said. “If they want my help, I’ll offer it. But I’m going to get season tickets and be in the stands. I’m looking forward to it.”

Malvik was on the road recruiting but returned to Winona as the news broke today. The Holmen (Wis.) High School graduate was the starting point guard on the 2006 national championship team and the 2007 team that lost in the championship game. He played professionally for three seasons in Australia and spent a year as an assistant at Saint Mary’s University before joining his old coach at WSU.

“I don’t know if you can put into words all that he’s meant to us who have played for him,” Malvik said. “What he did for the school, the records he was a part of. He had a huge impact on a lot of people. He took the program to a place it had never been.”

Malvik said his status as interim head coach was day-to-day. He will return next season as an assistant coach even if an outside hire is made.

Winona State athletic director Eric Schoh was at the Warrior Club golf outing and not available for immediate comment.

Leaf informed the players via email earlier this week, and Malvik followed up with phone calls and text messages. Not everyone on the team is in town.

“We were all surprised at first,” said returning guard Josh Mongan, who missed most of last season with a knee injury. “Especially after the season when we were getting into postseason work and he was still here, being the same old coach Leaf he always was.

“We were surprised, but at the same time, we were going to back him in the decision that he made.”

Both Malvik and Mongan said nobody still on the roster is planning on transferring and the three incoming recruits are still committed to the program. WSU went 14-13 overall last season and 11-11 in the NSIC. Everyone on the team is returning except for redshirt freshman Tim Wagner, a Gale-Ettrick-Trempealeau product who decided to transfer to a junior college in Nebraska.

Leaf was named Winona State's head coach in June 1998, after being an assistant coach for 11 years.

Leaf played for Cotter High School from 1976-79, where he was the starting point guard in his junior and senior seasons. At Cotter, he played for John Nett, who at one time was the winningest high school coach in Minnesota. Cotter went to state during Leaf's sophomore year, but during his junior and senior years, the Ramblers lost to Randy Breuer and Lake City in the district finals.

He went back to Winona State for his master's degree in 1987, and while there he was an assistant coach under Jerry Nauman for five years. Nauman left in 1992, and legendary coach Les Wothke took his place.

Leaf stayed on as an assistant until 1998, when Wothke left and Leaf was named the new head coach.

From the sideline to the stands: WSU's Leaf steps down after nearly three decades

He was the local boy who took the local university to the national stage.

Mike Leaf won 382 basketball games, two national championships and nearly a third. Numbers that most folks will forever use to define Leaf’s l…

They weren't wearing buckle-shoes and knickers. They weren't in search of religious freedom.

Winona State coach Mike Leaf looks on during a game against Minnesota State-Mankato earlier this season. The Warriors, who missed an opportunity to win an NSIC regular-season title, begin conference tournament play at 7 p.m. Wednesday.

Winona State University head coach Mike Leaf has a laugh with an official Monday, Nov. 3, 2014, during an exhibition game against UW-Eau Claire at McCown Gymnasium in Winona.