Ted Hazelton, a Winona mayoral candidate, has shared public social media posts that differ from his claims of wanting equality during a League of Women Voters forum last week.

Hazelton said during the public forum in response to possible racism in the Winona community, “People really need to take a deep look at themselves before they criticize others. I believe in equity. I feel that Winonans should feel safe, appreciated and valued, no matter what their background is, where they come from. And this needs to stop.”

He said that he has seen and heard about examples of racism in Winona and that he would like to continue to listen to Winonans about their experiences.

The candidate, though, is an active public social media user, making his views on politics clear on his Facebook page.

One post, dating back to December 5, included him sharing his views about it being “time to boycott the Hallmark Channel,” after the channel’s CEO expressed a willingness to include LGBTQ couples in its holiday movies.

Additionally, Hazelton expressed on March 11 that “public schools are going to hell” after a Minnesota middle school decided to hang a LGBTQ flag in their cafeteria, while not allowing a flag that represents a “traditional family.”

On January 21, Hazelton posted on Facebook his desire for Winona County officials to say no to allowing refugees to settle in the county. With that, he shared an article titled “Minneapolis: Somali Gangs Are Claiming Territory and Killing to Defend It” by conservative outlet The Washington Standard.

The publication’s article, posted on Oct. 26, started with, “We’ve brought you several stories of the Muslim colonization of America from Florida to Maine to Michigan and Minnesota. Many of those settling into Islamic communities in America have anything in mind but assimilation. The latest evidence of this comes from Minneapolis, Minnesota, where Somali gangs are now claiming territory and a young Somali has now gunned down another young man.”

As for people who identify as Democrats, Hazelton posted publicly on his Facebook June 13 that Democrats “talk without a brain.”

About the current coronavirus pandemic, Hazelton posted on his Facebook page March 16 that, “This whole coronavirus thing is getting out of control. Everyone is overreacting.”

He shared an image March 6 claiming that what makes the pandemic “scary” is media outlets.

About climate change, Hazelton shared an article headlined “Dozens of Failed Climate Predictions Stretch 80 Years Back” on Dec. 9, captioning the post that the climate change “hoax” goes back multiple decades.

Hazelton told the Winona Daily News, in response to a request for comment, that the posts are from at least four years ago, even though they are dated as posted in 2019 and 2020.

He said that whenever someone comments, shares or interacts with the posts in any way, then the date on a Facebook post changes.

The Facebook software does not, in fact, change the time stamp on posts when they are interacted with by people.

Hazelton went on to say that he does not use Facebook very often because he does not have internet access at home. He said he is unable to use it unless with his son because the public library is closed due to COVID-19.

Hazelton has posted on Facebook eight times during July.

Hazelton said in a voicemail later Monday, “The one thing I would say is if people are upset or offended or felt that that was inappropriate, well then I would offer a public apology.

“As I mentioned before, I am not racist. I am not any of these things that people throw out there these days as a label. I believe that people should be treated with respect,” he said.

He said that a key point of his campaign platform is “to work to create an atmosphere where citizens feel safe, valued and respected.”

Hazelton said he has posted his platform goals on his Facebook.

Winona mayoral candidate Jovy Rockey is getting out in front of a gross misdemeanor theft conviction she was handed back in 2010.

Police calls for Thursday, Aug. 13: Winona woman referred after police find her in possession of methamphetamine near Garvin Heights

Another set of storage units will be making their way to Winona and are expected to be completed sometime mid-fall, developer and Winona Littl…

All Winona Area Public School students will return to school Sept. 8 in a hybrid format, the district’s board decided Wednesday.

Police calls for Tuesday, Aug. 11: Winona woman arrested on drug warrant, later discovered to be in possession of methamphetamine

Vickie Speltz, the food-service director for the Lewiston-Altura School District, has been named the 2020-21 secretary/treasurer for the Minne…

Greg Olson, incumbent county commissioner for Winona County District Four, will go up against F. Craig Zeches for the board position during th…

Temporary day shelter to open in Winona for those in need

A temporary day shelter in Winona will receive support from the CARES Act, according to a decision approved Tuesday by the Winona County board. 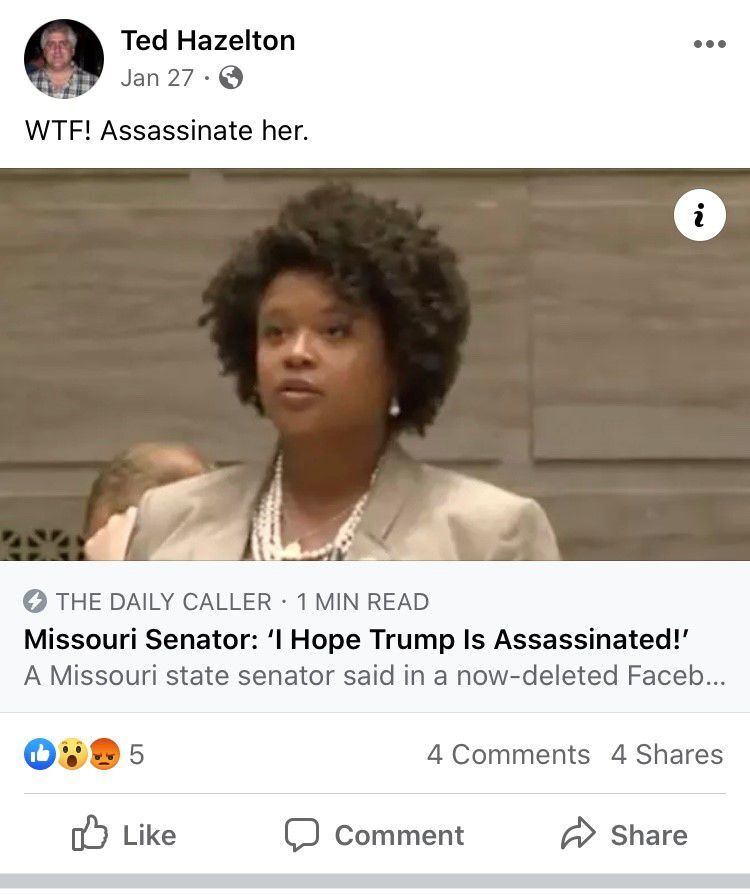 Pictured is a post from Ted Hazelton on January 27 calling for the assassination of a senator. 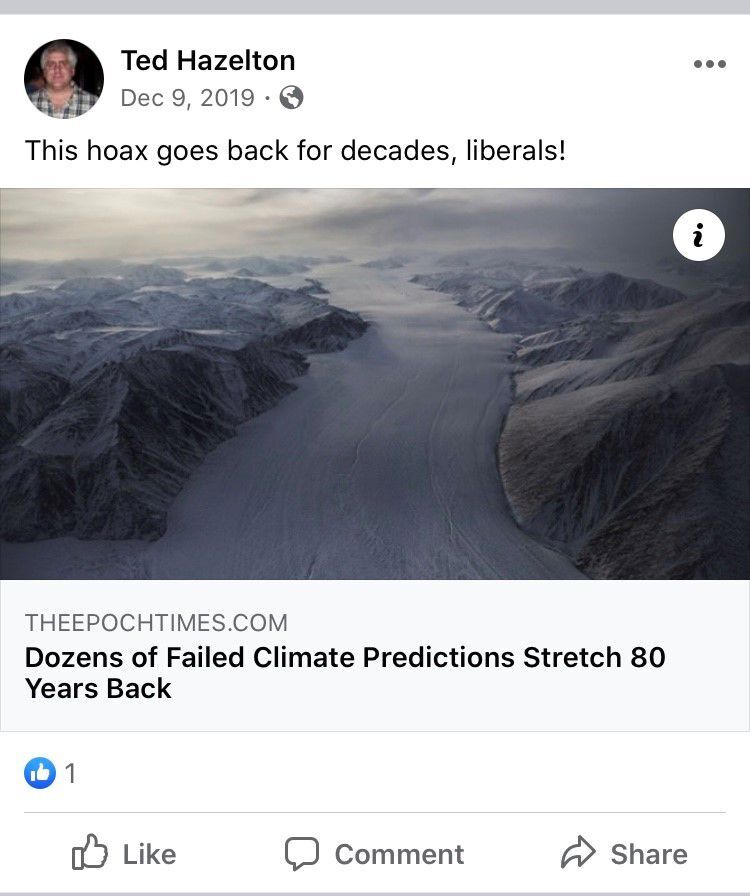 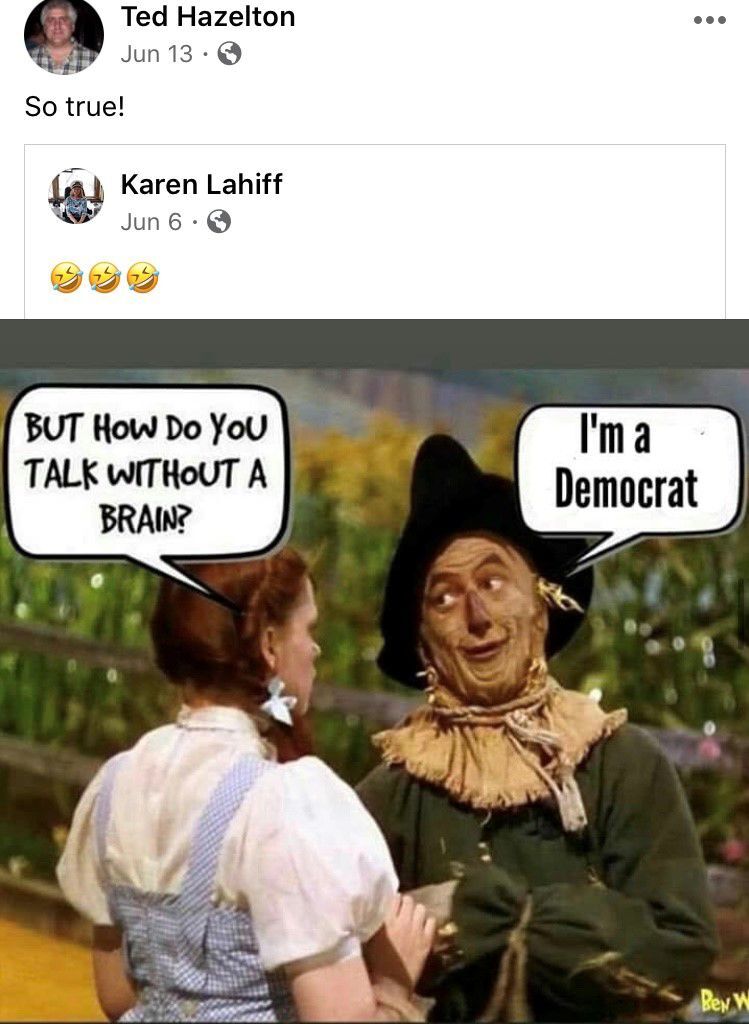 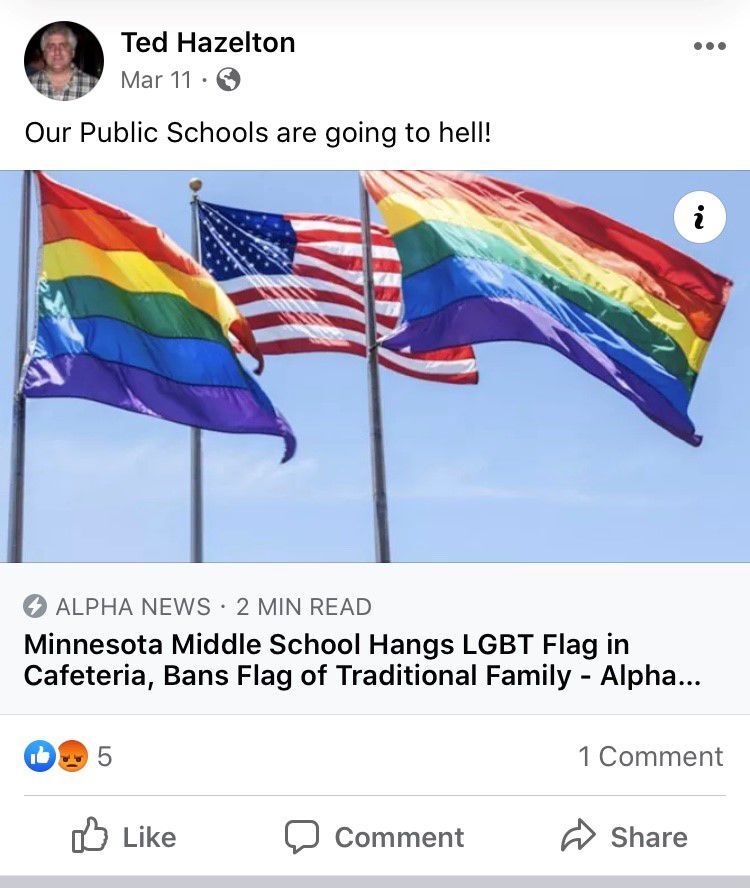 Pictured is a Facebook post of Ted Hazelton about a LGBT flag being hung in a Minnesota school. 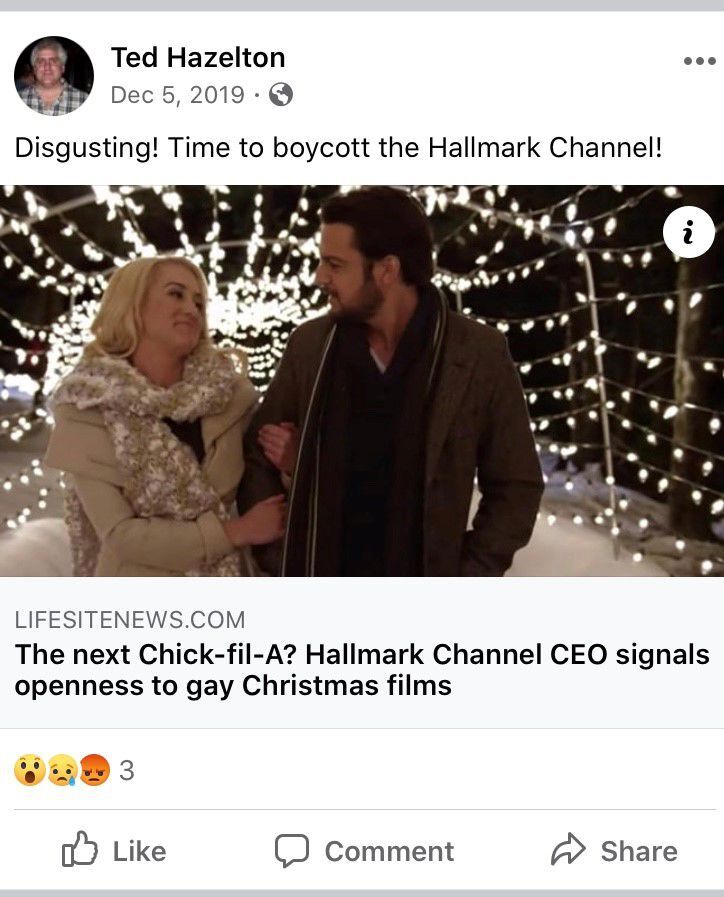 Pictured is a Facebook post by Ted Hazelton claiming that the Hallmark Channel should be boycotted for being open to including LGBTQ couples in its movies. 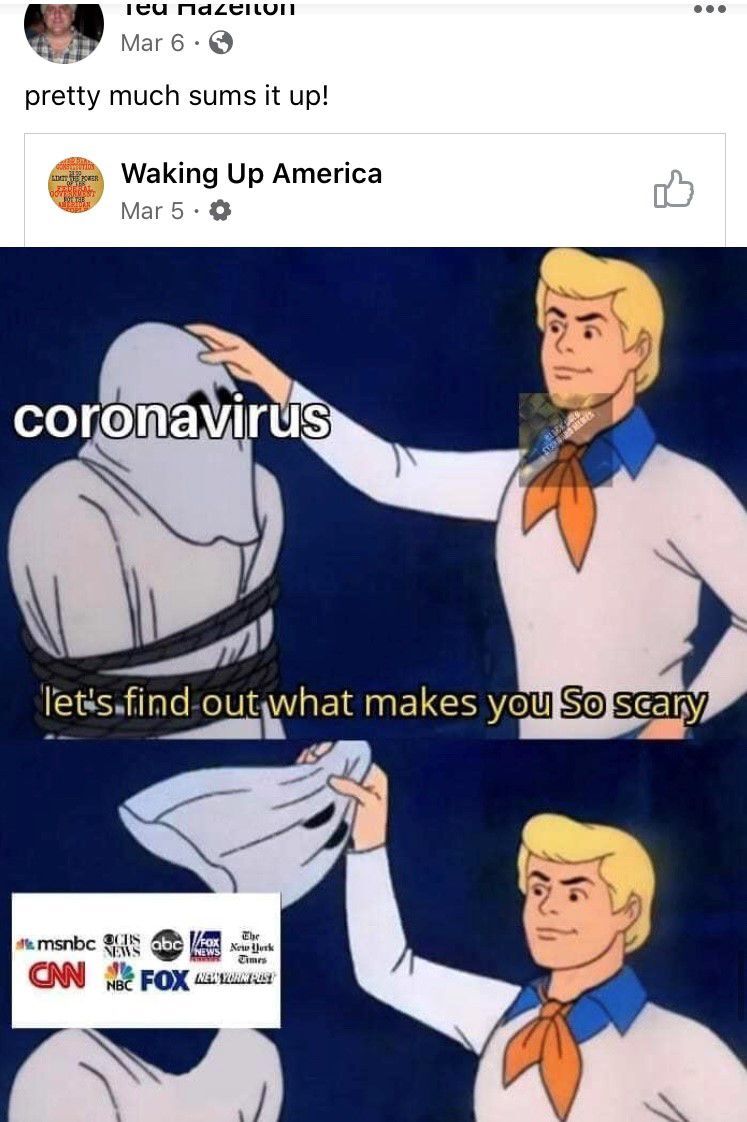 Pictured is a post Ted Hazelton shared on Facebook about the coronavirus only being scary because of media outlets. 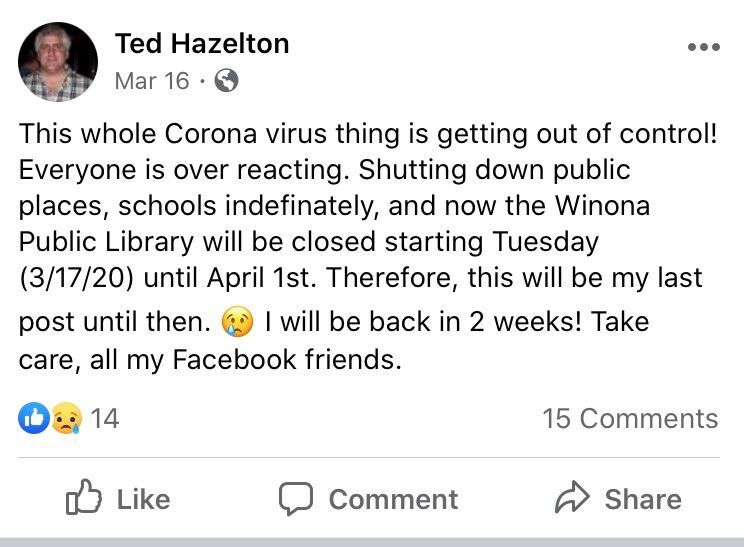 Pictured is a post by Ted Hazelton claiming the city of Winona has overreacted about the COVID-19 pandemic. 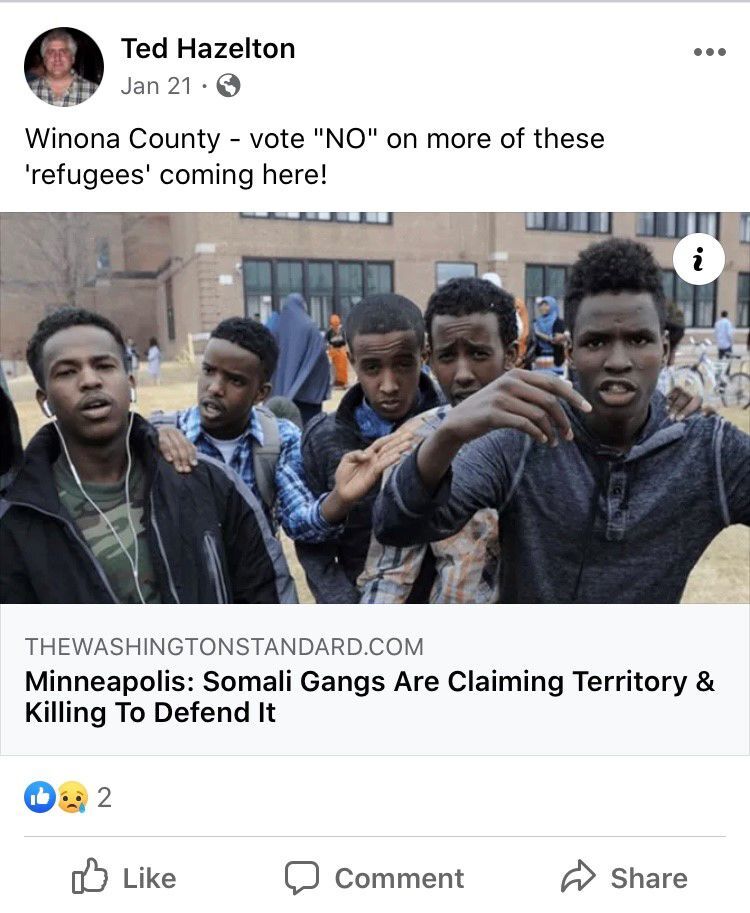 Pictured is a Facebook post by Ted Hazelton claiming that he did not want Winona County officials to agree to allowing refugees to settle in the county. 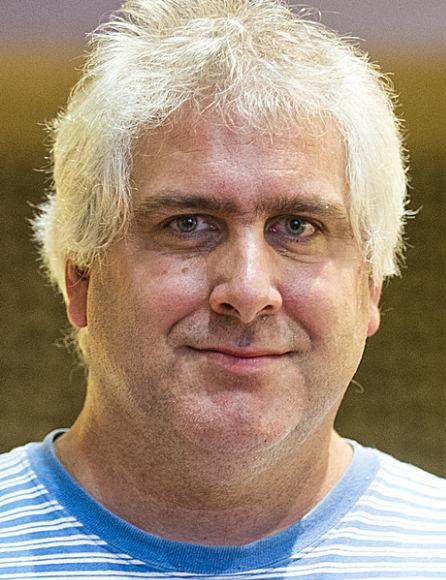