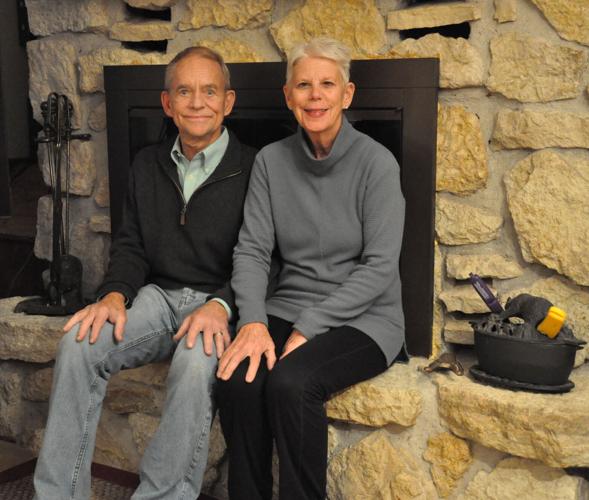 David and Terry Lee in front of the fireplace at their home in Onalaska. 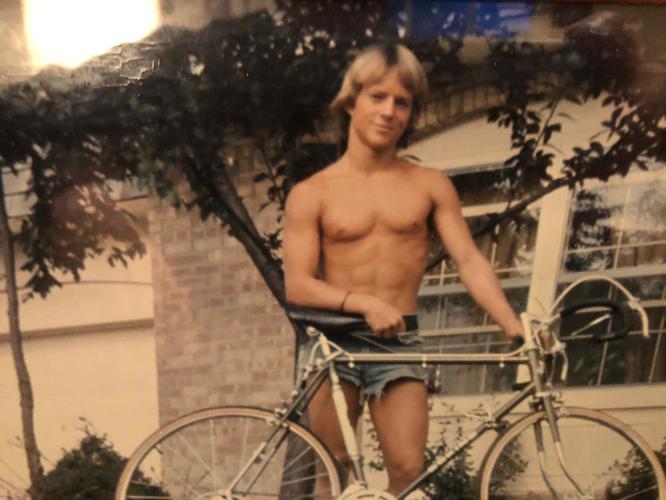 David Lee as a young man.

David Lee and his wife, Terry, will host 30 to 35 people, including six grandchildren, at their Onalaska home on Thanksgiving Day.

It’s an occasion they don’t take for granted.

Twenty years ago, David was the recipient of a heart transplant. On Dec. 4, he and his family will celebrate 20 years with a new heart during an open house from 4 to 7 p.m. at the Freight House in La Crosse.

The transplant story began 25 years ago. David was an active youth, competed on the diving teams at West Bend East High School and UW-Eau Claire and maintained a physically robust lifestyle into his early 40s. His life suddenly changed in 1997, when he was playing in a “sandbox football game” at his church and fell face-first into the sand.

“My kids thought I was just fooling around,” he said. “Then a friend of mine said, ‘You should check this out.’”

He went to the hospital for testing and was fitted with a pacemaker the same day. He said the next two or three years were “fine,” but then his heart began to deteriorate. Finally in 2002, he was placed on a transplant list at age 47.

Fortunately for David, the wait for a suitable heart was just six weeks, and the transplant conducted by Mayo in Rochester, Minnesota, was a success. He remained in the hospital for the next three months (normal for transplant patients), followed by 60 days in a “gift of life” house until he was able to return home.

He said the first two years after the transplant were a challenge as his doctors worked to get his medicine right. After that, the next 16 years were uneventful from a medical standpoint. Prior to his heart problem, he kept in shape by bicycling, water and snow skiing, walking, playing tennis and golf and doing 300 sit-ups and 150 pushups per day, a lifestyle he carried into his recovery. He kept his new heart strong with an exercise regiment that included weightlifting, sit-ups and 2½ miles per day on the treadmill.

He remained in good health until three years ago, when he was diagnosed with prostate cancer. The cancer disappeared after doctors removed his prostate, but the cancer has recently returned.

Then came even more shocking news: He was diagnosed with a rare case of adult-onset muscular dystrophy.

“About a year ago, I found myself getting weaker and weaker,” he said. “Terry and I went to about 30 different doctors trying to find out why I was getting weaker, and none of them could explain it.”

The incurable disease, typically diagnosed in children, weakens the muscles (but not the mind) over a gradual period of time. It has compromised his mobility and ability to exercise.

It also unlocked the mystery to why David’s original heart failed in the first place.

“For 20 years, they told us it was caused by a virus,” Terry said. She said it wasn’t until genetic testing came back last summer that they learned that muscular dystrophy was the cause.

David knows the disease will gradually leave him weaker and weaker.

“The fact that I got it as an adult is pretty rare,” he said. “They don’t have much information on what happens with adults. They can’t tell me if I’m going to be in a wheelchair in six months or a year or five years. I’ll eventually end up there, but there’s no schedule on how this is going to affect me, because everybody is different.”

Still, David acknowledges he has already beaten the odds. While 96% of heart transplant patients survive the first year, only 19% make it to 20 years.

He’s grateful for those two decades. During that time, he built a successful dairy consulting business and got the chance to watch is family grow and prosper. The couple’s two daughters, Amanda and Katie, live in Wisconsin, and David and Terry get to see their grandchildren often.

“If they come to the door and I’m the first one there, the first words out of their mouths after ‘Hi, Nonny,’ is, ‘Where’s Papa?’” Terry said. “Papa is an excellent player. He loves to think up games for them. He is always teaching them things ... they love their Papa.”

Amanda is a professional author with 11 books to her credit. Her husband, Matt Zieba, is a middle school health teacher and assistant baseball coach at UW-La Crosse. They live in the La Crosse area with their two children, Kameron and Riley.

Katie lives with her husband, Ryan Kindschy, in Marshfield, where she is a physician assistant in reconstructive surgery at Marshfield Clinic. They have four children — twins Everett and Alayna, and Theo and Eva. Ryan is in the process of taking over David’s consulting business.

Thanks to his immediate family, and a large family contingent on Terry’s side, the home is often full of people.

“We are kind of like the Kool-Aid house here,” David said. “When we host things like a family reunion, there can be up to 50 to 60 people here. We’re centrally located.”

David does everything he can to remain active. He’s an accomplished woodworker, and much of his work can be seen in the home’s furniture and fixtures.

“I live within my limits, but I don’t sit on the couch,” he said. “In the evening, I put on my tool belt and go around and fix something or build something.”

David anticipates his three siblings — Gary and Kathy from Arizona and Anita from Eden Prairie, Minnesota — will travel to Wisconsin for the open house. David plans to speak during the event and will have particularly warm words for his wife.

“This isn’t what (Terry) signed up for,” David said. “She has been a phenomenal caregiver. Her name is Terry, but it should be Rock of Gibraltar Lee.”

Terry said her husband’s outlook on life goes a long way toward sustaining them.

“I always say that God knew what he was doing when he made him the patient and me the caregiver,” she said. “He’s a wonderful patient and appreciative of what anybody does for him.”

IN PHOTOS & VIDEOS: A look back on October in the Coulee Region

Halloween to the Max

Riding before the rain

Autumn on the farm

A Winona man walked out of Fleet Farm with $1,400 worth of unpaid-for product before being stopped by a Fleet Farm asset protection staff memb…

The Winona community is being asked to step up to help a resident who is always more than happy to help others.

A Hastings, Minnesota, woman was arrested Nov. 23 in Jackson County after she allegedly drove drunk with four children in her vehicle.

With 46 years of history, Hei and Low Tap has become a staple in the Winona community throughout its existence.

The nonprofit Recreation Alliance of Winona, in its presentation to city council this week, said there’s so much potential here to attract visitors.

Here we sort of go again with new COVID-19 viral versions circulating. The omicron family is breeding a soup, a swarm or a slew of mutated sub…

Across every indicator, American Indians and Alaska Natives face massive disparities in health care. According to the National Congress of Ame…

At 12:28 a.m. Wednesday, the Winona Police Department arrested Jesse James Robertson, 35, of Winona for violating an order for protection and …

France plans to ration power in case of shortages

The world's most expensive cities to live in 2022

The world's most expensive cities to live in 2022

David and Terry Lee in front of the fireplace at their home in Onalaska.

David Lee as a young man.