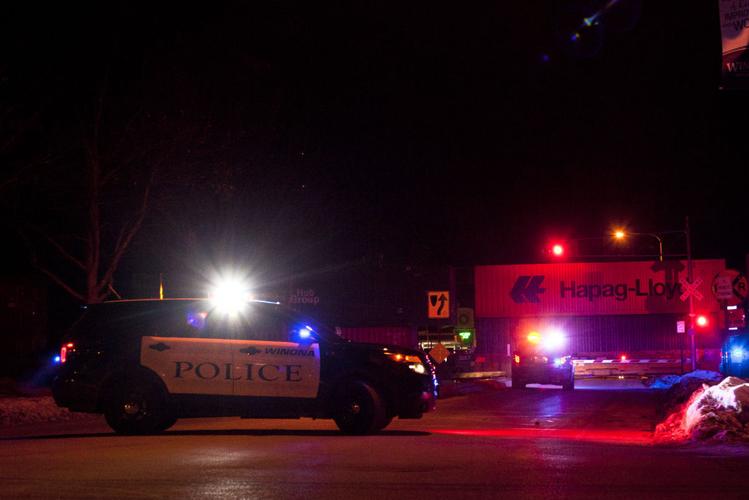 Winona Police Department cars are seen at the railway crossing on Huff Street after a pedestrian was hit by a train on Sunday. No more information was immediately available. 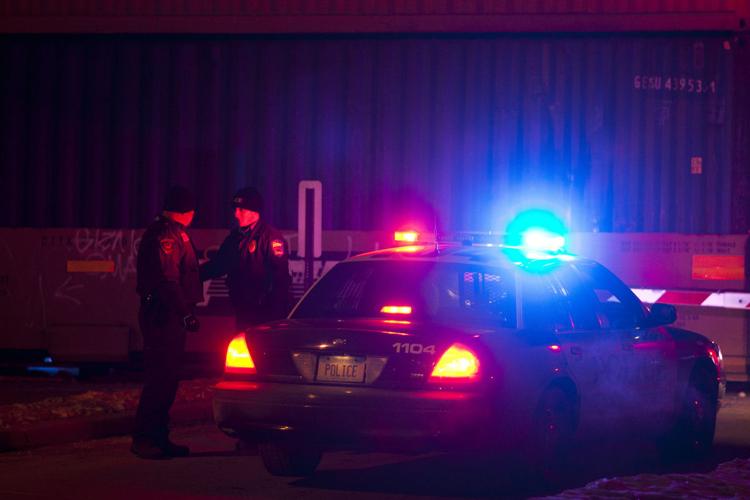 Winona police officers are seen at the railway crossing on Huff Street after a pedestrian was hit by a train on Sunday The accident is still under investigation. 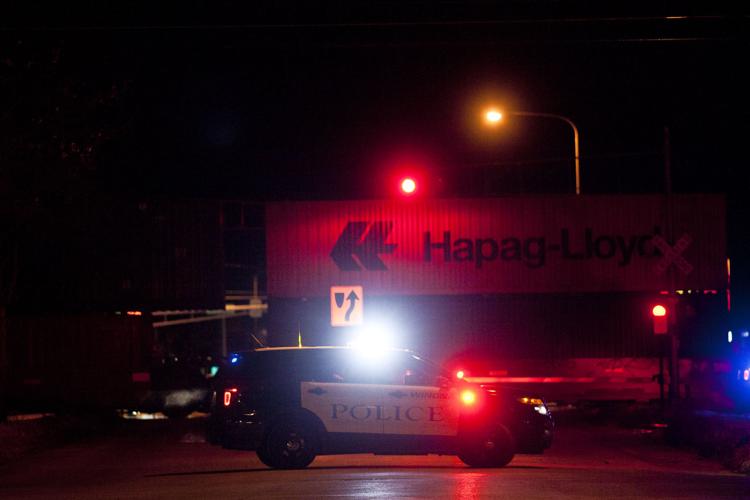 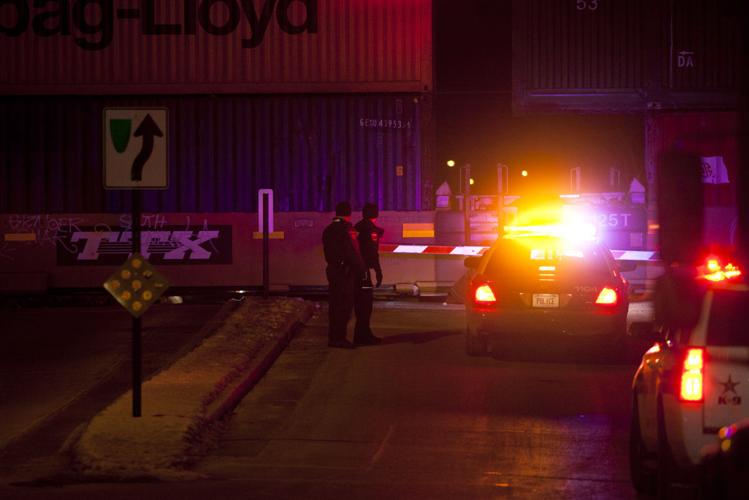 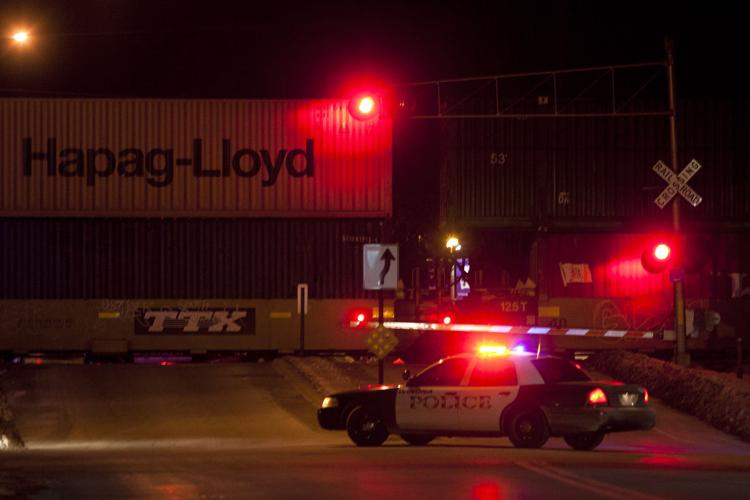 Winona police officers are seen at the railway crossing on Huff Street after a pedestrian was hit by a train on Sunday.

Derek Bute was always ready to help, whether it was a friend, a fellow classmate, or a troubled kid.

The Winona State University student was an energetic U.S. Army veteran who served abroad, had interests ranging widely from biology to working out, and led by example. He was good-looking — no doubt about that, friends said — and a unique, spirited character.

Dozens of friends gathered Sunday at one of Bute's favorite restaurants to remember the 25-year-old senior who was killed early Sunday when he was struck by a train at the Huff Street intersection near campus.

The details weren't still fully clear Sunday, but Bute appeared to have fallen on the tracks at the Huff Street crossing at approximately 1:24 a.m., according to police reports and the university. He was transported via ambulance to Winona Health shortly afterward, where he was pronounced dead.

Andy Cummings, a spokesperson for Canadian Pacific, said the eastbound train, which was stopped on the tracks across several city intersections for about two hours, was bound for Chicago from Vancouver, British Columbia.

"Based on the preliminary investigation, it appears the train crew sounded the horn, but unfortunately contact was made. It can take a train a mile or more to come to a complete stop," Cummings said.

He said Canadian Pacific police are working with Winona police in the investigation, and their thoughts are with Bute's family.

Bute was an exercise science major from Alden, Minn. near Albert Lea, and a combat medic in the U.S. Army.

Friends, coworkers, and classmates gathered to remember him and talk about the tragedy Sunday afternoon at Mango’s in Winona.

By 2:30 p.m., more than 30 friends crowded into a back room, where they sat quietly at first, mariachi music playing from the restaurant speakers, an NFL game flickering silently on the wall TV.

“I don’t think anyone knows what to say yet,” said Sadie Halverson, a classmate of Bute’s in the exercise science program.

One woman, one of Bute’s roommates, brought a box of tissues and set it on the table next to the chips and salsa. The group talked about receiving an email from the university and seeing Bute’s name. His roommates recalled being awakened by a police officer delivering the bad news.

“It’s not the news I wanted to wake up to,” said Zach Prough, Bute’s roommate and friend, who arranged the gathering.

Prough opened a Mango’s menu. “This was one of Bute’s favorite places,” he said, pointing to the Burrito Deluxe, which Bute ordered almost every time he went there. Bute had his own sombrero just for Mango’s, and had recently celebrated his 25th birthday at the restaurant.

Prough met Bute at Warehouse Liquor, where they both worked at the time. He called Bute’s interests “eccentric” — Bute loved studying for his chemistry and biology classes, working out, eating Mexican food, serving as a medic, and looking good doing it.

“He was definitely a character of his own,” Prough said with a grin. “He was always very excited, and a lot of energy. He was just a very positive spirit.”

Halverson, who was taking a class with Bute when the spring semester began a week ago, said Bute raised his hand often and knew the material well, and wouldn’t hesitate to assist his classmates with homework.

“He was always willing to help,” she said. “He seemed really motivated in school and stuff, and still made time for his friends, too.”

“He made me read one of his biochem labs and I thought it was in Chinese,” said Ian Olsen, another of Bute’s roommates, with a laugh.

Bute got a kick out of helping people, Prough said, whether as a medic, with exercise science or in his job. Bute worked at Legacies LLC, a human services agency in Winona, as a direct support professional for troubled youth.

“He definitely liked working with the kids,” Prough said.

Bute, a sergeant in the U.S. Army, was deployed to Kuwait in 2012. He was a natural leader in the Army, said specialist Jacob Burke, who served under Bute for the past year.

“He was the kind of guy people looked up to,” Burke said. “He led by example, and he lived up to every standard.”

Burke said Bute had won at least two Army achievement medals and was recognized for heroism during a training exercise this summer.

“He was about to go places in the Army,” Burke said. “I don’t know who’s going to be our next first line leader.”

For nearly two hours, Bute’s friends talked, wept and swapped stories, some of them hilarious. Like the time Bute spilled coffee on his roommate’s papers and tried to blame the cat. Or the times he’d show up at a local bar in a suit and tie, just for fun.

Roommate Olsen, who arrived at the gathering wearing Bute’s sombrero, said the whole morning he half-expected Bute to walk through the door of their house and say gotcha.

“Like a dirty trick. That’s all I wanted,” he said quietly.

Finally Prough stood up to give a toast, inviting the group over to his house.

“Everyone can pay their respects — check out how messy his room was,” he said.

“I’m sure he would have loved the turnout tonight. He’d be looking damn good in that sombrero.”

Construction began in spring 2015 on pedestrian tunnels under the rail line near WSU's campus, a project the university had pursued for several years. The construction is expected to be completed later this year.

The tunnels project, designed to provide safe railroad crossings for both students and the broader community, will create two pedestrian underpasses, one at Winona Street near the new residence halls and one at Johnson Street near the entrance to Maxwell Field.

The project is a joint venture among WSU, Canadian Pacific and Minnesota Department of Transportation. The project has been under development since 2008 and was in discussion for years before then.

The 63-year-old man had attempted to walk across the tracks when a stopped train began moving again, striking and killing him.

COLLECTION: The Daily News' top-read stories of 2016 (So far, that is)

From locals on the Price is Right to breaking news, take a look at what you chose, through your clicks and eyes, as the top Daily News stories…

All in, all the time: Friends, family to remember WSU student with military-style fundraiser

When Derek Bute did something he was all in, whether he was studying, serving as an Army medic, working out or mentoring a troubled kid.

A La Crosse man was struck and killed by a Canadian Pacific Railroad train early Sunday morning in Winona.

Winona Police Department cars are seen at the railway crossing on Huff Street after a pedestrian was hit by a train on Sunday. No more information was immediately available.

Winona police officers are seen at the railway crossing on Huff Street after a pedestrian was hit by a train on Sunday The accident is still under investigation.

Winona police officers are seen at the railway crossing on Huff Street after a pedestrian was hit by a train on Sunday. 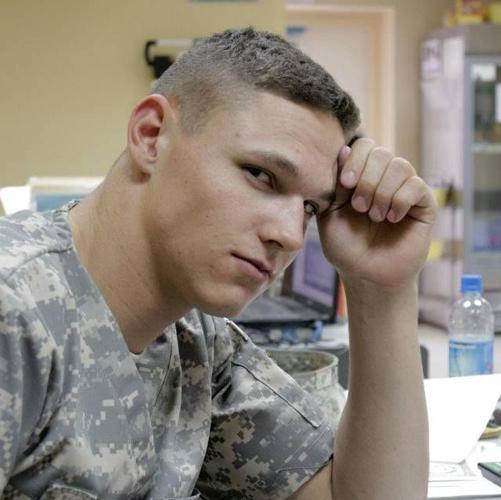