The League Park on the old Fairgrounds (Now Westfield golf course) in 1909. The park was built for Winona's first professional team, the Pirates. 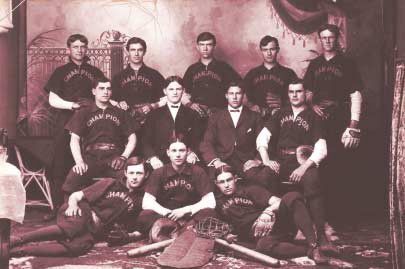 Local and semi-pro ball clubs flourished in the early years of the last century. The Champion baseball team played its schedule in Winona's Athletic Park in the West End of town. Most of the team was made up of men from both St. Casmir and St. Stanislaus parishes. Left to right (front row) Jack Knopik, W. T. "Rose" Joswick, Henry .f Peterson; (second row) Ike Yahnke and Rudy Bohn; and (top row) John Wrycza, "7 Cisewski," and Pearl Cierzan.

This story originally appeared on May 10, 1911, in the Winona Republican-Herald, a predecessor of the Winona Daily News.

Fandom was in complete control of the city from early morn till late in the afternoon today. The day broke with all the grandeur that could be desired and fans were astir soon after sunrise.

For three months baseball bugs have been looking forward to this day of all days and when the tickets for the opening game were placed on sale there was a grand rush and all seats in the grandstand were sold twenty-four hours before the game was scheduled to start.

Sports from the surrounding country came into the city during the forenoon and it was apparent at the time of going to press this noon that there would be an attendance at the game greater than any other since league ball was started in this city. It was estimated by several that over 3,000 would pass within the gates before the game was over.

Business Suspended AfternoonStores and factories throughout the city were generally closed during all of the afternoon or at least after two-thirty. The public schools were also closed at three to allow any that desired to go to attend and there were a great many students that took advantage of the opportunity as well as teachers.

Winona and Eau Claire have always been well in the lead of the other teams in the league and the race between the two teams for the opening game was a spirited one. Odds favored the local team as it was generally conceded they had been holding back in their pre-season playing in order not to let any outsider know what they were capable of doing.

The visiting team, known as the Commissioners, arrived in the city at noon today from Eau Claire and were in the pink of condition and felt sure they were going to snatch the first game from the Pirates, but “Joe” said this was impossible as he had given all his men some mysterious medicine What insured success.

Winona Wins Opening Game 6—7Showing the never die spirit and fighting like trojans before a crowd roughly estimated at three thousand yelling, cheering, howling fans, the Winona Pirates demonstrated their ability to win even though twice in the roar this afternoon when they met Eau Claire on the home grounds in the opening game of the season.

Eau Claire took the lead in the early part of the game on account of hitting McNeill freely, but were overtaken by the Pirates who pushed over four runs in the third, but McNeil was again touched up lively and the Commissioners got four more runs in the fourth, but the Pirates again came back strong and made three runs in the fifth and were never in danger after that.

McNelll was ditched in the fourth inning and Dauss took his place and through his masterly pitching and his nice base hit, the victory can be largely attributed.

League Pres. Predicts Great ThingsPresident of the Minnesota-Wisconsin “Minny” League, Frank E. Force, had this to say about the upcoming baseball season:

“Opening with the games of today the Minnesota-Wisconsin League starts upon its third season and if early indications can be taken as meaning anything at all the year will be the best that the young organization has yet known.

“This will be due not to any particular change in the league personnel, but to the fact that baseball is becoming more and more popular in the various cities of the league and to increased facilities for advertising this popularity to the baseball enthusiasts around the circuit. Not only are the home papers of the respective cities making preparations to cover the games in a more thorough manner than ever before, but the publications of the larger cities outside of the league are evincing an interest that is resulting in columns on Minny league baseball dope where previously little recognition could be obtained. I have found the morning and evening papers of the Twin Cities particularly friendly and while the publication of news by these papers does not increase the attendance greatly from Twin City fans, still it must help in the long run to an immeasurable degree. In baseball as in everything else the right kind of advertising is the thing that produces a winner and before the year is over we hope to have every baseball man in the northwest interested in and conversant with affairs of the Minny league.

Regarding Salary Limit“Two things may be mentioned at this time as of leading importance to the success of the league. The first is the salary limit, and the second is the matter of umpires.

“In years past the clubs of the league have had a salary rule, yet in spite of the earnest and continuous efforts of the league executive, at one time and another various clubs have violated it.

“Just the moment one club violates this rule o£ paying one or more player too much money, this club breeds dissatisfaction in its own ranks and inspires a spirit of carelessness regarding the rule in the other seven members of the circuit.

“Baseball players know pretty well what is going on as far as the salary proposition is concerned and the moment a few of the regulars learn that some new comer is getting bigger money they become disgruntled and are the very ones to carry the news to the players of some other club, who in turn take the matter to their manager. Thus the salary lid is off in a rush and before they know it all the clubs are deeply in debt with, a payroll hundreds of dollars over the limit.

“I have asked of the club owners their co-operation in aiding me to enforce this rule and I am determined that it shall be enforced, and if the men who run the clubs will not give the right information regarding their salary lists, then other steps will be taken to punish the offenders.

Good Umpires Provided“The umpiring proposition is a hard one in any league. Umpires are but mortal and just as a shortstop is likely to make an error at a very important moment in the play, so is the umpire bound to miss close ones at times when they count even against the home club. The men I have selected to umpire are men who understand baseball, are honest and conscientious and will, I trust, give satisfaction. They have been instructed to give the decisions as they see them, not to play any favorite, and to retrain absolutely from showing an inclination, whatever to favor a home club. I do not think for a moment that these officials will not make mistakes, but I do believe they will work hard to get every decision right, and they will be in absolute charge of every ball game, when once it has started

“They have been instructed, too, to keep the games clean and free from rowdyism, for I believe that spectators do not go to ball games to see crowds of ball players in continual discussion either among themselves or with the umpire.

Fans Should Co-operate“I hope indeed that the fans of every city will co-operate with the men behind their respective clubs to make the season a marked success. We have eight of the finest cities, the north west can show; baseball is the greatest sport of all the world, and there is no reason why this league should not succeed in proportion as do some of its older and more firmly entrenched neighbors. Harmony, co-operation and goodwill will do far more than jealousy and strife.

“Baseball should be a sporting spectacle, not a fight. If the home club cannot win, there is just one. other that must, and that is the opposing team.

“The season which opened today promises to be the most successful in the history of the organization and it’s up to the loyal fans of Winona to see that proper support is given the team in the way of attendance, which not only encourages the team but puts the club on a self-supporting basis.

“We are in hopes that the year of 1911 will be so successful that the Minny League will again be one of the big little leagues on the baseball horizon in the season of 1912.”

A judge said the case against the 42-year-old man has a "horrendous set of facts."

The League Park on the old Fairgrounds (Now Westfield golf course) in 1909. The park was built for Winona's first professional team, the Pirates.

Local and semi-pro ball clubs flourished in the early years of the last century. The Champion baseball team played its schedule in Winona's Athletic Park in the West End of town. Most of the team was made up of men from both St. Casmir and St. Stanislaus parishes. Left to right (front row) Jack Knopik, W. T. "Rose" Joswick, Henry .f Peterson; (second row) Ike Yahnke and Rudy Bohn; and (top row) John Wrycza, "7 Cisewski," and Pearl Cierzan.