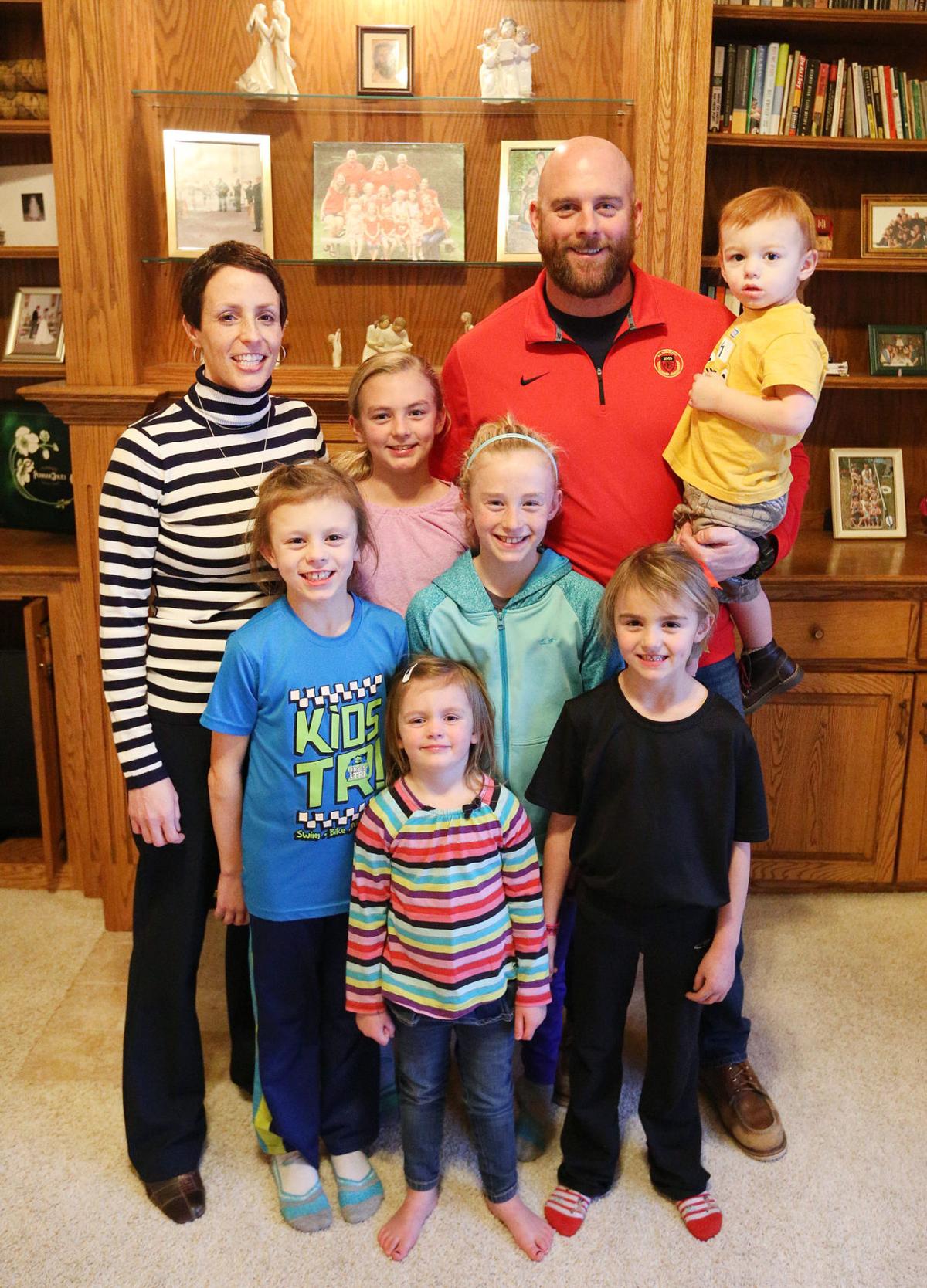 Dr. Laurel Quinn and her husband, Jason, stand with their kids (back) Grace, 11, Lincoln, 2, (middle) Hope, 8, Faith, 9, (front) Ireland, 3, and Reagan 6, at their home in Winona. Quinn, an ophthalmologist at Winona Health, is back at work after battling leukemia for two years. 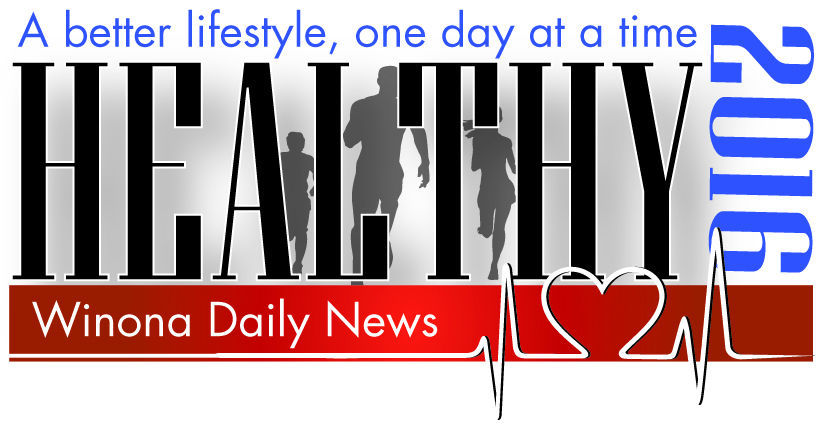 Laurel Quinn is accustomed to being in a hospital.

She’s been an ophthalmologist specializing in cataract surgery at Winona Health since 2006.

But when she was diagnosed with leukemia two years ago, she quickly got acquainted with the other side of health care. Instead of being the doctor, she was the patient. Instead of having everything in her capable hands, she had no control.

After two years of chemotherapy, a stem cell transplant, and lots of other hurdles, Quinn has a good chance of beating the disease. She returned to work full time at Winona Health in January and said the process left her thankful to be alive and healthy again.

“I feel great — there are so many scenarios where it could have been so much worse,” she said on a recent afternoon.

“I feel like I have a lot of energy now, just by comparison. I can’t believe that I was so sick.”

A vivacious woman with a quick smile, Quinn was eight months pregnant with her sixth child when she started feeling fatigued. She blamed the symptoms on the pregnancy, but when she had a bad sore throat she couldn’t shake, she decided to check in with Winona Health midwife Suzanne Cooley.

Quinn remembers the day in vivid detail. It was a Monday morning, Dec. 9, 2013. She had just finished conducting four cataract surgeries, but felt extremely tired, so she stopped in at the lab to have her hemoglobin checked.

A typical level of hemoglobin is 12, but Quinn’s that day came back at 6, a level at which doctors can order a blood transfusion.

Ever the optimist, Quinn finished her day of work and went home, guessing she just needed to eat a steak or something, and hoping she wouldn’t need a transfusion.

But at 5:30 p.m. she got a call at her home from Winona Health, saying she needed to come in. She arrived at 6 p.m. and met with Cooley, along with several other providers, who had news: they thought she had leukemia.

They told her the baby should be fine, but she needed to give birth as soon as possible so she could start chemotherapy. Oh, and there was a bed waiting for her at Mayo Clinic in Rochester.

A few hurried phone calls later, scrambling to get relatives to watch their five daughters, Quinn and her husband Jason were on their way to Rochester. Quinn had her suspicions that the whole thing was a mistake, but was admitted and told to rest, so doctors could induce labor in the morning.

“He was ready to get out of there, I think,” she said. The couple’s first boy was tiny but perfectly healthy, and spent a week in intensive care but was soon returned to his mother’s hospital room.

“He was fine from the get-go,” Quinn said.

His mother, however, was not. A bone marrow biopsy confirmed that she had acute myeloid leukemia, and she started chemotherapy the next day.

She was in the hospital for a month at first, missing the holidays with her family, watching her hair fall out, and wondering how to tell the kids their mom had leukemia.

Jason said the kids, all younger than 10 at the time, had recently lost their grandfather to cancer, so it wasn’t an easy thing to bring up.

“It’s a different type of cancer,” he said. “We just kind of talked to them that way.”

Quinn said she was scared and worried during that first month, and it was strange not to care for her infant son like she normally would. Lincoln did sleep in her hospital room with her and Jason, and was so quiet and mellow the staff could hardly believe there was a baby there.

“He was like this bright light of happiness,” Quinn said, smiling as she remembered. Other patients would stop by and coo over him, along with staff. “He was kind of a little bright spot for a lot of people.”

Quinn went through chemotherapy that spring and recovered for six months, but relapsed and needed a stem cell transplant during what became a two-year ordeal.

Nausea, boredom, and loneliness aside, Quinn said the hardest part was when, skinny, bald and dehydrated, she couldn’t even eat.

“So much of it is out of your control, and you should be able to control eating and drinking, but my gut was completely wrecked,” she recalled.

As a doctor, Quinn said she gained a deeper understanding for what people are going through when they are scared and sick.

But despite a few dark days, Quinn said the experience was full of small blessings, and she held onto a sense of hope.

“I had a pretty good idea that there would be an end in sight,” she said.

Jason said a positive frame of mind helped him, too, as he cared for the kids. He’s a full-time dad, and said the family’s daily routine — always a controlled chaos — kept right on through Quinn’s illness.

“Life doesn’t stop — you still have to function as a family,” he said. “You just gotta try and stay positive. It’s kind of your choice that you have.”

Both of them said they were grateful for help from their family, church, friends, and coworkers. Quinn stayed with her sister in Rochester during the transplant process, and Jason’s identical twin brother came to stay with the kids several times.

Today, Quinn feels great and has a 75 percent chance of being completely cured, though it will take years to say that for sure.

She gets her blood checked monthly, and enjoys simple things like walking quickly across a room and doing her job, which she loves.

“It’s going beautifully,” she said. “I feel like a million dollars.”

Quinn said she feels incredibly lucky the way things worked out, with insurance, care at Winona Health in between Mayo appointments, and good communication between the two hospitals.

“We have this place that can figure this stuff out in our community,” she said of Winona Health. “We were just super lucky and blessed to be here.”

As for 2-year-old Lincoln, who toddles around the family’s home, ever in pursuit of his five older sisters, he doesn’t yet know the unusual story of his birth. But, Quinn said, he definitely will.

The week's top 10 (or so) in review: WAPS board votes on facilities future; $65K ring missing; winter sports playoffs ahead;

Dr. Laurel Quinn and her husband, Jason, stand with their kids (back) Grace, 11, Lincoln, 2, (middle) Hope, 8, Faith, 9, (front) Ireland, 3, and Reagan 6, at their home in Winona. Quinn, an ophthalmologist at Winona Health, is back at work after battling leukemia for two years.