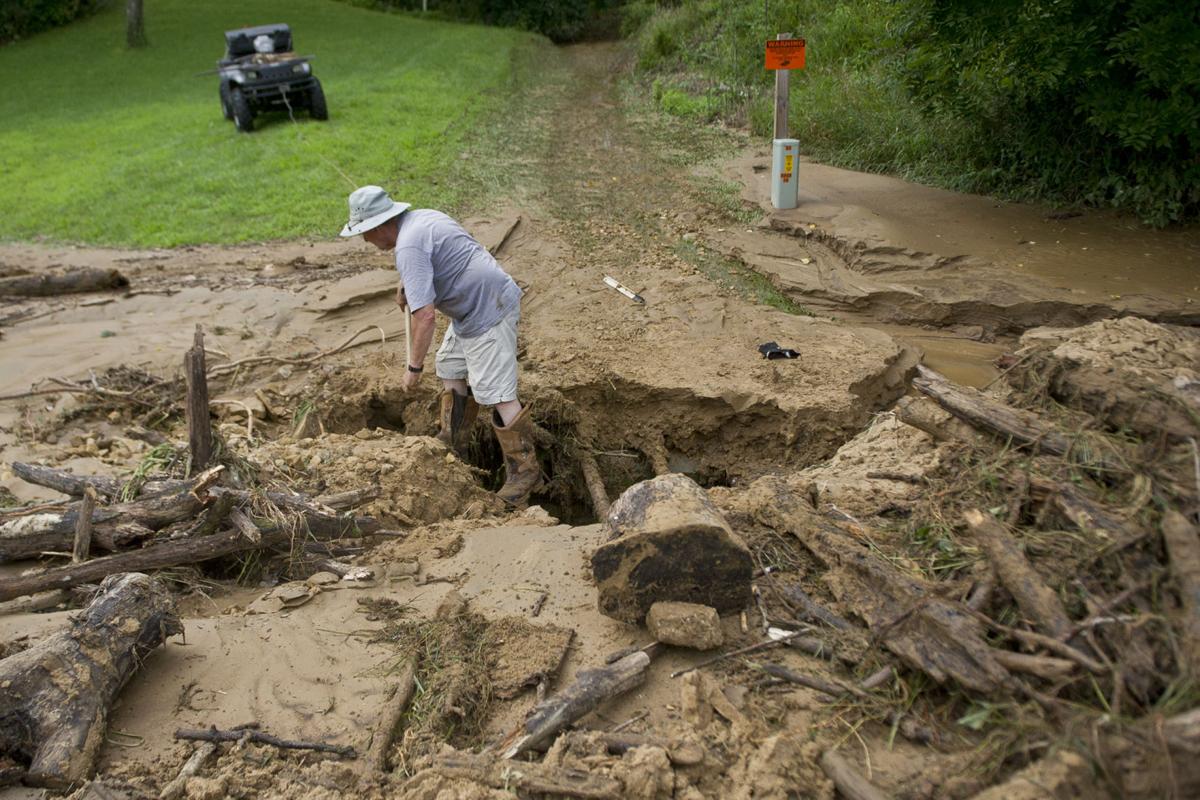 Jerry Knabe picks up sticks and rocks from his flood damaged yard near Tell, Wis., on Thursday morning after heavy rains flooded parts of western Wisconsin. 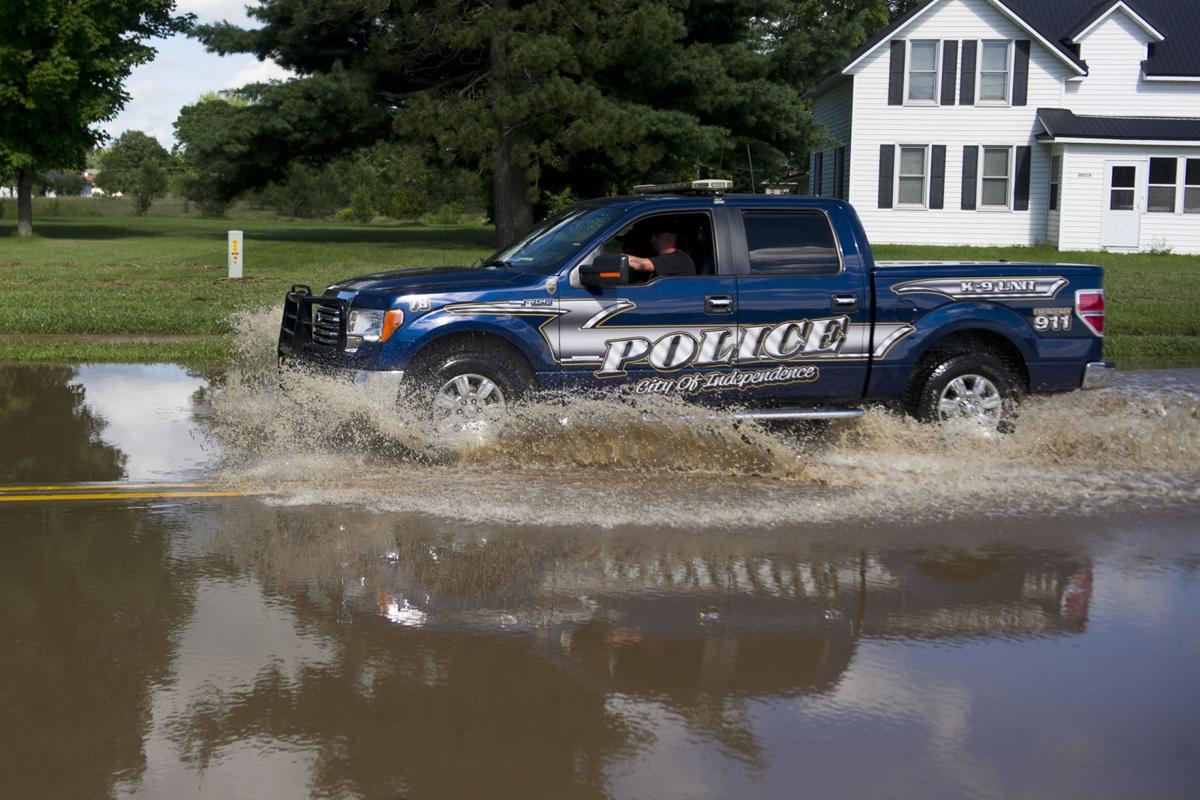 An Independence police vehicle drives through the flooded streets of the town on Thursday afternoon after Bugle Lake flooded parts of the town. 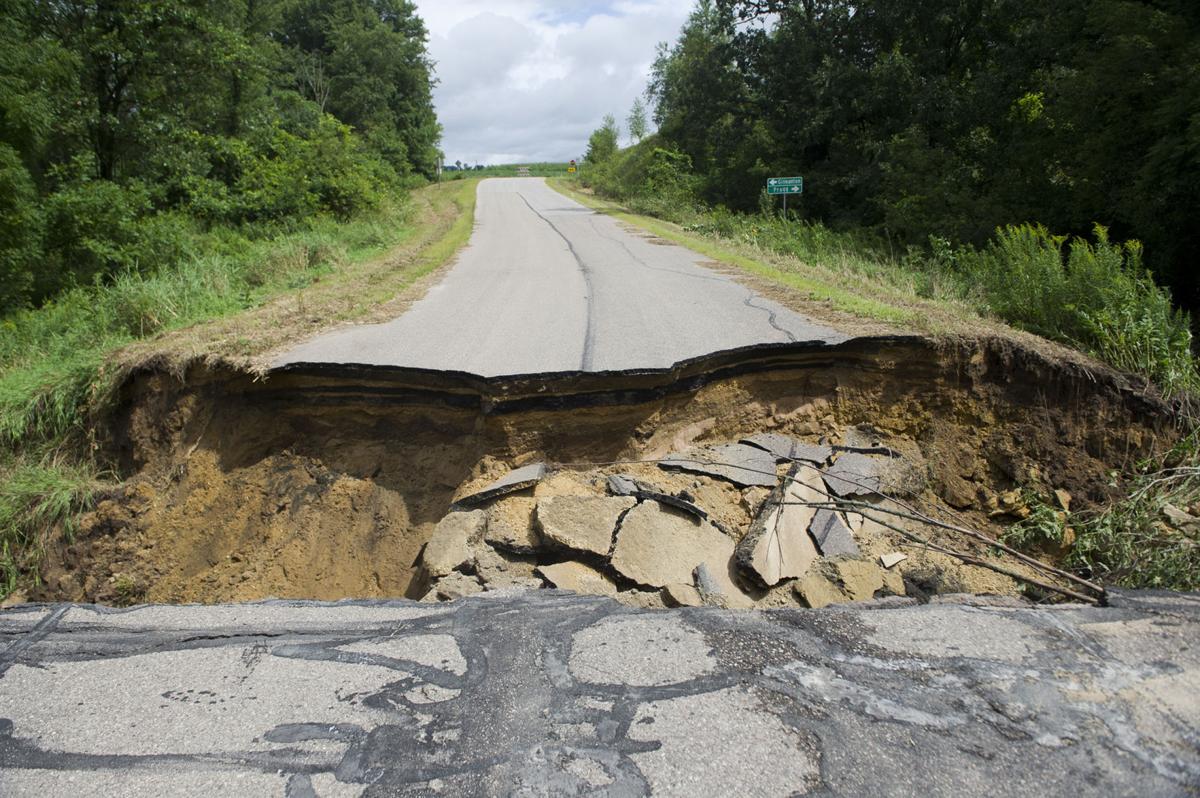 A bridge collapsed on County Road NN near Gilmanton, Wis. on Thursday morning, one of the many damages caused by flash floods in western Wisconsin. 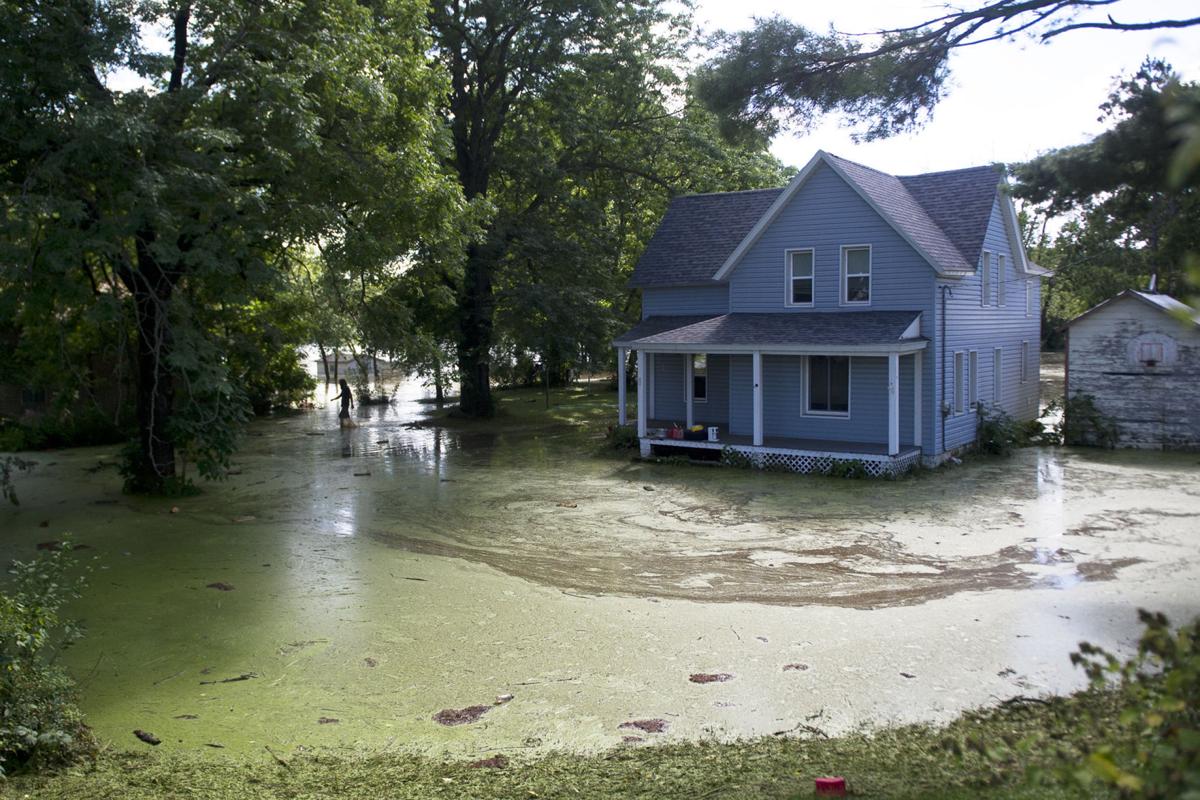 The home of Jason and Mark Parrish is seen surrounded by flood waters in Independence, Wis., on Aug. 11. Heavy rains caused Bugle Lake to flood parts of the town, prompting some residents to leave. 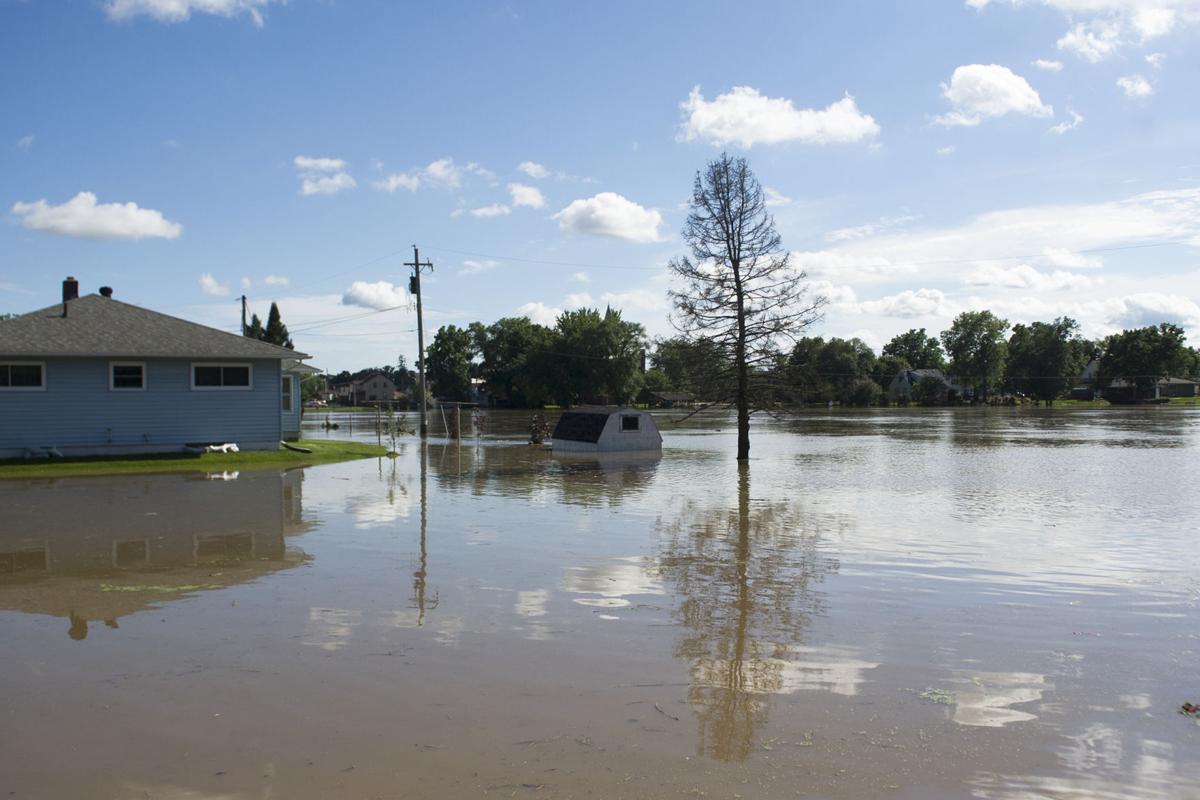 The rain arrived suddenly overnight, and lingered much too long.

But while the storm that tore through western Wisconsin and parts of southeast Minnesota damaged houses, roads, bridges, and every other structure it seemed at times to seek for reasons only nature defines, it spared both life and limb.

The storm came and went; the sufferers lived on.

Buffalo and Trempealeau counties suffered through the worst flash flood in years Wednesday night and into the predawn hours Thursday, with heavy rains washing out roads and inundating areas of some small towns, including Gilmanton and Independence. Amid the chaos came stories of residents reaching needed hands to others while slogging through muck and mud in early attempts to save, clean and rebuild.

Buffalo County appeared to have suffered the brunt of the initial damage to roads, with several remaining closed Thursday. Trempealeau County seemed to have been spared a few roads, though both counties suffered significant damage to homes and structures. No formal estimates of damage were available Thursday, with Buffalo County officials estimating anywhere from $500,000 to $1 million or more in infrastructure alone, and officials in both counties urging residents to report all damage, large and small, in order to qualify for federal aid.

Both counties were placed under a state of emergency Thursday, with several primary and secondary roads closed, some with whole sections washed away. Gov. Scott Walker’s office said Thursday afternoon that it is closely monitoring flood developments across western Wisconsin.

Watching the banks of Bugle Lake swelling, emergency officials Thursday afternoon announced a voluntary evacuation in the town of Independence in Trempealeau County, with the zone along Hwy. 93 ranging from Cedar Street to Whitehall Road/Hwy. 121.

Much of Independence was already underwater, with the lake brushing against the backs of houses, and the intersection of Osseo Road and Elm Street impassable with shin-high water. The rush had knocked over garbage cans and flower pots on its way into basements, its way up staircases.

Three brothers — Jason, Mark and Kevin Parrish — were left with hours of cleaning to do.

Jason and Mark had moved into a house on the lake a few weeks ago, and had watched Wednesday night as the storm rolled in.

“People who have been here for decades say it’s never flooded like this,” said Mark, his other brother nodding.

“We were told it wasn’t in the floodplain,” Kevin said.

It was lucky, they agree, there was no major damage. The water stopped after reaching the top step of their basement, and initial surveying by the Parrish brothers showed they only lost some dishes, some books and some old photos.

Their yard Thursday was still covered by two feet of water, filled with algae and floating firewood. Even that was not so bad, Mark said, because it was receding.

Kevin figured the yard would be nice — and hopefully dry — by morning.

“You try to have fun with something like this, because you know it could have been worse,” Mark said.

When they were done cleaning, he said, “we plan to meet at the bowling alley and buy a few drinks.”

In Buffalo County, the Red Cross was assisting at least six displaced families from the Gilmanton and Mondovi areas, where the forks and fingers of Elk Creek that reach Independence first brought floodwaters farther north that rose above basement level and forced residents out of their homes.

Gilmanton, with a population just above 400, was particularly affected. Waters rushed through several homes, which led to neighbors rescuing neighbors as some were cut off from dry land. Treig Pronschinske, the Mondovi mayor who spent his Tuesday night watching primary election returns that won him a chance at a state Assembly seat, spent his Wednesday night and Thursday morning in his capacity as a volunteer firefighter, working with others to rescue area residents. Cream, an unincorporated town in Buffalo County, also suffered significant damages.

State Sen. Kathleen Vinehout of Alma and other officials on Thursday urged all Buffalo and Trempealeau county residents to fully report all flood damage, because the final tallies will determine whether the county will be eligible for state and federal aid.

The Buffalo County Emergency Management service advised any residents with property damage to dial 211 and report, as well as avoid calling 911 unless they’re calling with a true emergency. Residents dealing with flooding are asked to visit the Wisconsin Department of Health’s website for flooding resources, or consult the department’s Flood Toolkit guide, which is also attached to all flood stories on the Daily News’ website.

At Suncrest Gardens in Buffalo County, the popular rural pizza farm, owner Heather Secrist said the farm suffered some damages, including passing debris flowing into pasture fences. No animals were harmed, with only buildings or fields affected, she said.

She said the farm remains open for business, but asked patrons to stay safe and exercise extreme caution if traveling.

That sense of caution pervaded the words from officials across Buffalo and Trempealeau counties. While some roads re-opened Thursday, others remained closed in parts or in entirety due to washouts, bridge collapses, cave-ins and other damages.

Southeast Minnesota and western Wisconsin has hilly topography and porous geology particularly susceptible to flood damage, and officials warned drivers traveling on even seemingly safe and undamaged roads to move slowly and with caution, given that it wasn’t yet known Thursday what underlying destruction remained.

Assessing the aftermath, hoping against more

Nearly 8 inches of rain fell in parts of Wabasha County, with parts of Buffalo County reporting between 5 and 7 inches. In Trempealeau County, the Arcadia area saw about 5.5 inches of rainfall.

There was no flooding or damage reported in Winona County, where the storms brought a band of rain but not nearly as heavy as what was reported in the north and east, said Winona County’s emergency management director, Mike Peterson. About 1.3 inches of rain fell in the city of Winona, with areas in the northern part of the county closer to Whitewater State Park seeing about 3 inches of rain.

More storms were expected Thursday night into Friday morning, though revised forecasts throughout the evening offered increasingly optimistic outlooks, with initial reports of heavy rain revised to an estimate of 1 to 3 inches falling across the region.

Todd Shea, Warning and Coordination Meteorologist with the National Weather Service in La Crosse, said with all the uncertainty s to the extent and severity of the storms, residents should exercise caution.

He urged all residents to pay attention to weather reports, stay on high ground if at all possible, and to take any additional flash flood warnings seriously — warnings being the most serious threat the Service broadcasts, meaning not only that conditions are favorable but that chances are, at worst, good.

More flash flooding is predicted, as is the potential for strong and damaging winds.

And area rivers are expected to continue to rise.

Here are Thursday's final rainfall totals, as reported by the National Weather Service Thursday morning. Note that totals vary by city depending on recorded location; what's listed below was the highest recorded number.

Buffalo County is advising all residents with private wells submerged by recent flood waters to not drink the water until the well is tested.

Roads are opening across Buffalo and Trempealeau counties, though note that damage still exists and in some cases there are lane restrictions and brief detours; drivers are urged to use extreme caution. Before traveling, click here to consult this interactive map of closures and changes.

Buffalo County to use CapX funds for flood repair

Walker declares state of emergency in western Wisconsin after flooding

Wisconsin Gov. Scott Walker declared a state of emergency Monday for Buffalo, Trempealeau and Eau Claire counties in response to the heavy rai…

Buffalo County: Bridge on Hwy. Z, washed out by flooding, may take years to replace

A bridge on Buffalo County’s Hwy. Z that was heavily damaged by flash flooding in August will be costly to replace.

Jerry Knabe picks up sticks and rocks from his flood damaged yard near Tell, Wis., on Thursday morning after heavy rains flooded parts of western Wisconsin.

An Independence police vehicle drives through the flooded streets of the town on Thursday afternoon after Bugle Lake flooded parts of the town.

A bridge collapsed on County Road NN near Gilmanton, Wis. on Thursday morning, one of the many damages caused by flash floods in western Wisconsin.

The home of Jason and Mark Parrish is seen surrounded by flood waters in Independence, Wis., on Aug. 11. Heavy rains caused Bugle Lake to flood parts of the town, prompting some residents to leave.