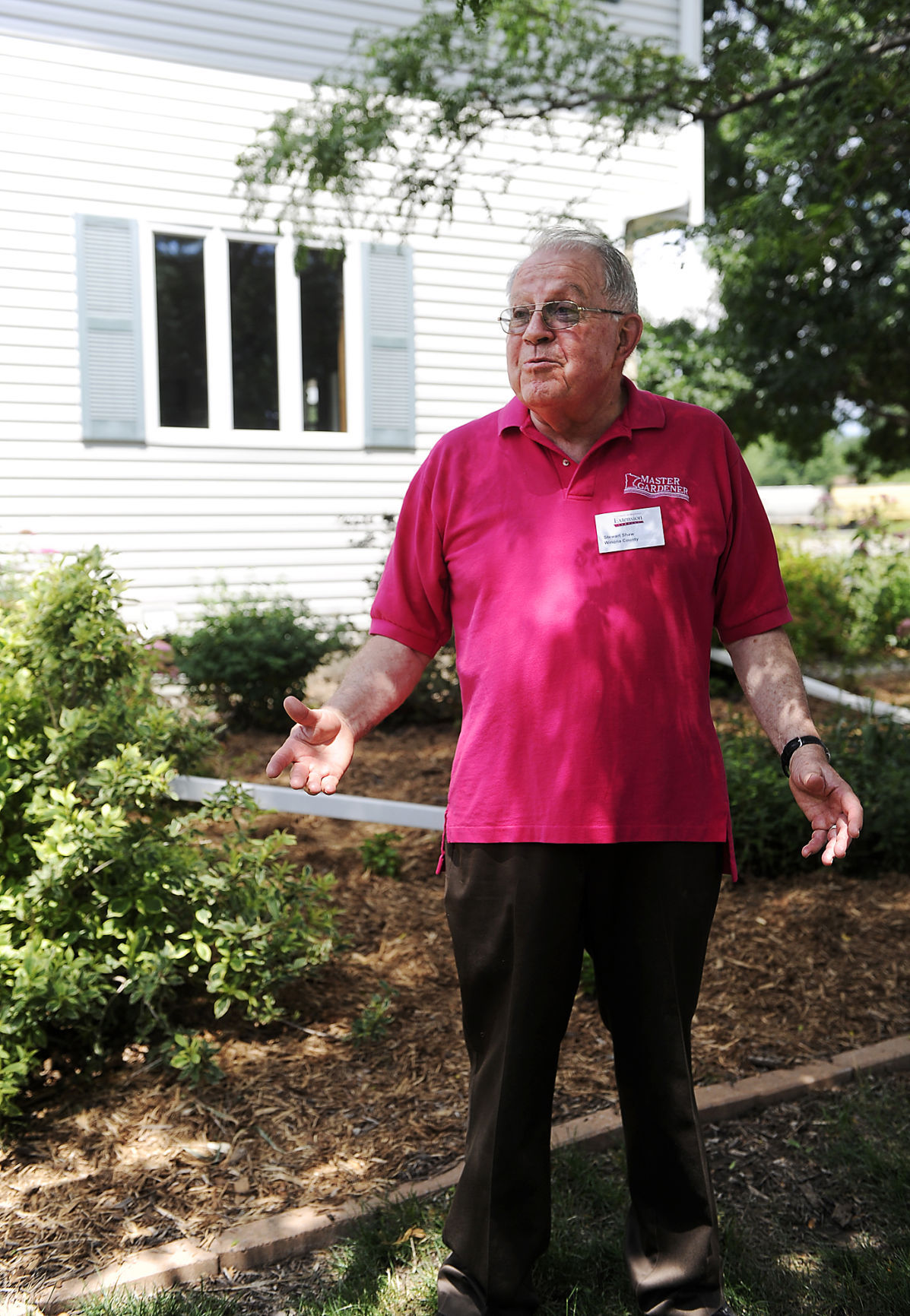 Master gardener Stewart Shaw talks about plants during a garden tour of a Home and Community Options house in 2012. Shaw, who died last month at 80, was a champion of several community causes in the Winona area. 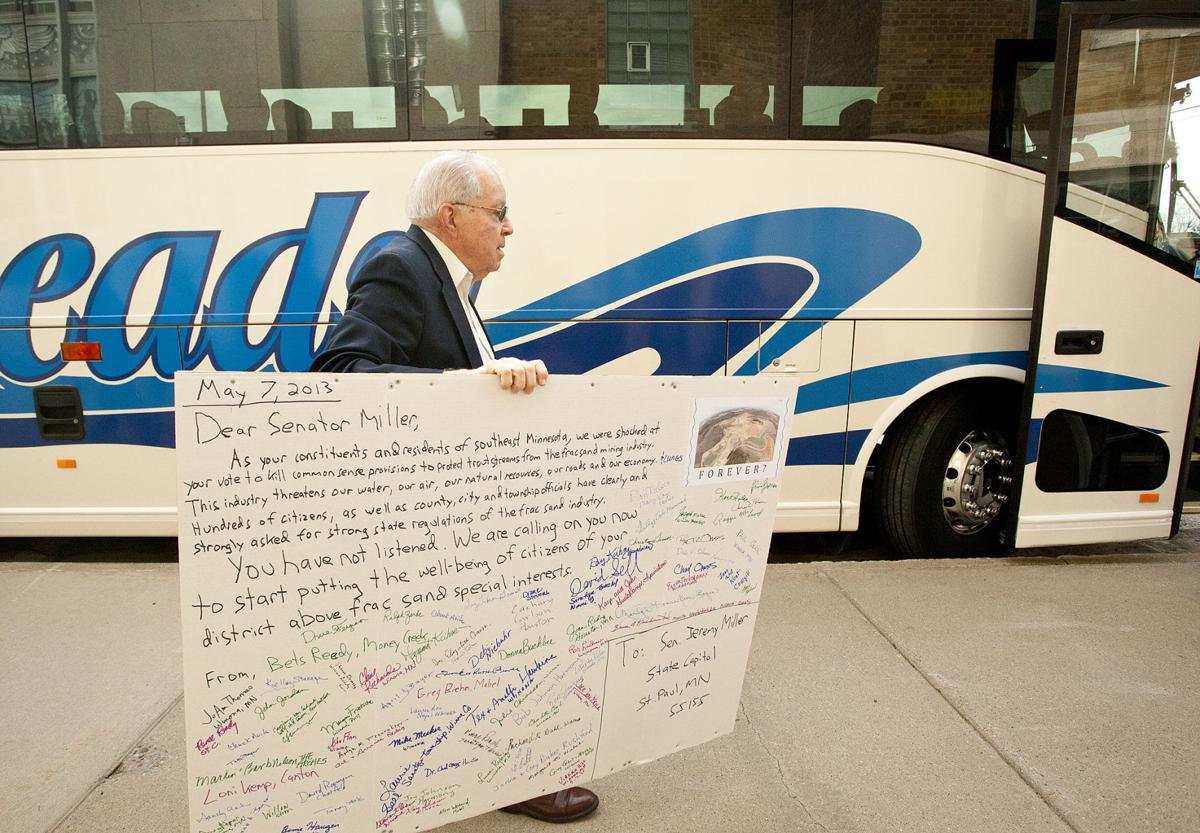 Shaw carried an oversized postcard in May 2013 on his way with a group to the state Capitol to discuss frac sand issues. “When he believed in something, he thought about it, got involved, and worked with everybody to make changes in the community,” said his wife, Kay. “You could count on him, and you knew his approach was careful and thought-out.” 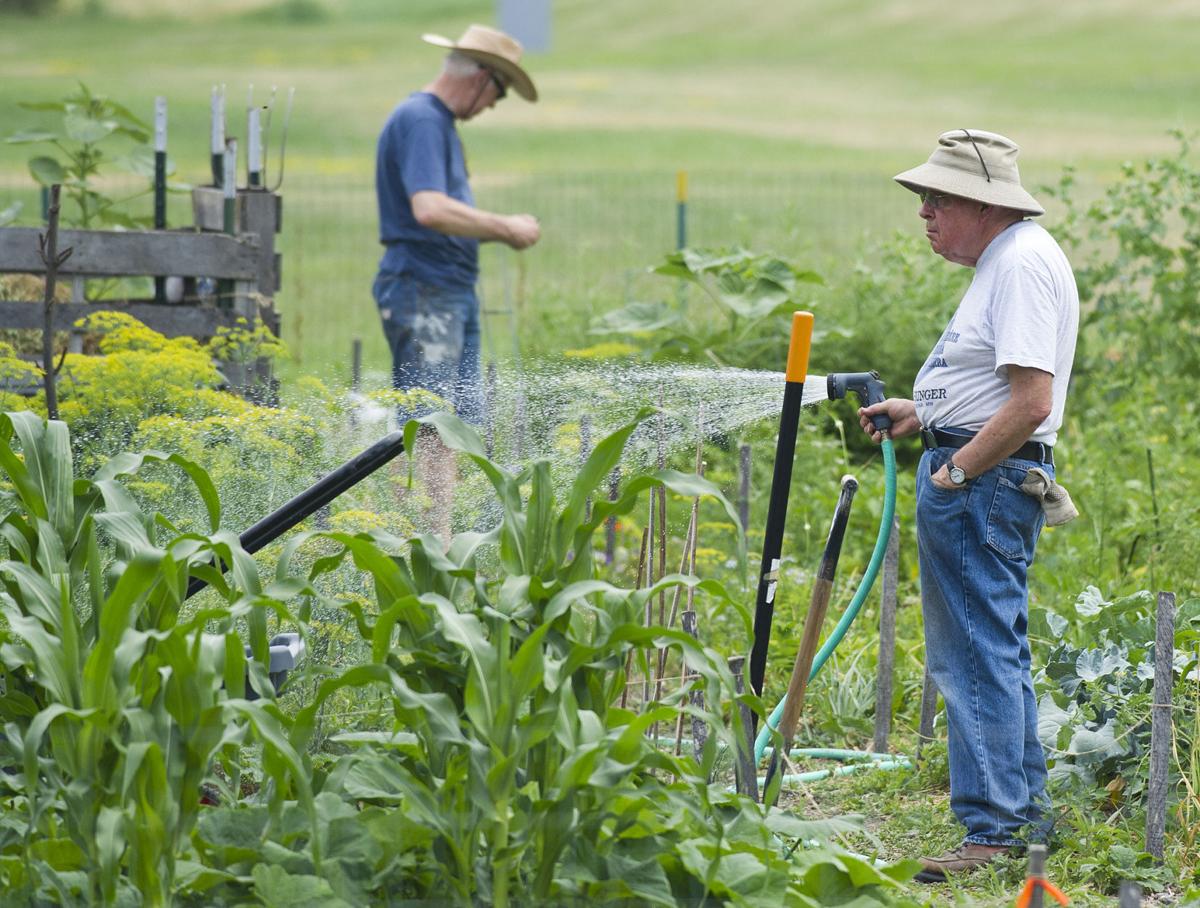 Stewart Shaw only lived in Winona for the past 25 years of his life, but considering how well-known he was, and the list of his contributions he made to the community, you’d think he’d been here twice that time.

He was on the board of directors for Home and Community Options, serving as board president for several years. He sung for terminally ill patients with the Wellspring Singers, and comforted the sick as a pastoral care volunteer at Winona Health.

He shared his knowledge as a Master Gardener, spoke out against frac sand mining in the city of Winona, advocated for primary prevention of domestic violence, served communion at Wesley United Methodist Church, and was involved in several other groups and organizations.

Stewart, who passed away late last month at age 80, never slowed his community involvement. In fact, after he retired 13 years ago, he voluntarily filled his schedule with meetings and could often be seen toting a briefcase as he quietly went about his new work.

Although Stewart certainly had more time for volunteerism in his retirement, his passion for making the world a better place stretched back to before he lived in Winona.

“He’s always been concerned about social issues and so forth,” Kay said.

Stewart was born in Oelwein, Iowa, and attended Coe College in Cedar Rapids, Iowa. After he graduated, he received a Fulbright scholarship to study in England, then returned to the U.S. and earned a Ph.D in philosophy from Columbia University in New York.

Stewart taught at Hamline University in St. Paul for many years before becoming registrar there. In 1990, Stewart became registrar at Winona State until his retirement in 2002.

Stewart and Kay met in a summer program for university students in the Twin Cities in 1955, and at first they dated other people without a second thought.

“I was a year older and an inch taller,” Kay said with a smile.

But the group of friends kept in touch, and Stewart and Kay went on a few dates over the next four years while both were pursuing graduate degrees. They got married in 1961 in Minneapolis and had two sons and one daughter.

Kay said the birth of their son David in 1968 was a major impetus for Stewart’s humanitarian work.

David was born with Down syndrome, at a time when public opinion of people with developmental disabilities was just beginning to shift. Before that time, it was common for adults with disabilities to be sent to live in institutions, where they often lived unhappy lives.

But putting David in an institution was never even a thought for the Shaws, who immediately got involved in what’s now called The Arc Minnesota, an advocacy organization dedicated to improving educational, employment, and living opportunities for people with disabilities in their own communities.

Stewart jumped in, eventually serving as president of the Arc and advocating on a state level to move individuals with disabilities out of institutions and back into the community. His work was recognized in 2013 when he was honored as a Hero of the Arc.

When the Shaws moved to Winona, David followed a year later and lived in a group home with Home and Community Options, or HCO.

He said he remembers meeting the Shaws when David first moved to Winona.

“They impressed me by their awareness and capacity of really advocating to build David’s life into such a good quality of life,” Theede said.

David, who was exceptionally good at reading from a young age, also loved the Wizard of Oz, and when his high school in St. Paul put on the show, he was cast as a munchkin and voted the most enthusiastic cast member.

After David’s death at age 28, Stewart played an important role in getting HCO’s annual musical off the ground, seeking out sponsorships and volunteers, and pitching in whenever he could.

Kay said while Stewart might not have mentioned it outright, his son’s love of musicals fueled his work.

“It was really David’s presence and awareness of what was going on that spurred him to be involved,” Kay recalled.

“He touched a lot of people who came into the organization as cast members and volunteers,” Theede said.

Theede said while his love for David clearly spurred Stewart’s work, Stewart didn’t stop after his son died. He went on to serve as board president for HCO and served for many years in other capacities as well. His commitment sustained itself, and proved universal — he wanted to improve the quality of life for everyone.

That passion extended beyond folks with disabilities. Stewart was also an active member of Beyond Tough Guise and the Winona County Primary Prevention Project, both aimed at preventing sexual and domestic violence before it occurs by reaching out to men and boys.

Joe Morse, also a founding member of Beyond Tough Guise, said Stewart was not only interested in the cause but dedicated to it as well.

Using his philosophy background, and serving as board secretary, Stewart helped the group hone in on their key points and shared the message publicly, including in his role as a community columnist for the Daily News.

“It is high time we put a stop to this national disgrace,” he wrote of domestic violence in 2012, arguing that while there are resources for women and courts for abusers after incidents, there also needs to be a concentrated effort to alter accepted norms of male behavior that are negative toward women.

Morse also worked with Stewart in the group Citizens Against Silica Mining, which the Shaws joined because they live just down the road from a sand processing facility.

No matter what the cause, Stewart lived out his convictions.

“He understood in order to have a really strong community, we needed people to participate,” Morse said. “He was a real ally in the effort to make Winona a better community.”

Stewart and Kay also offered their home as a meeting place for county commissioner Marie Kovecsi’s campaign in 2014, and Kovecsi said she was impressed with how dependable Stewart was.

“When he believed in something, he thought about it, got involved and worked with everybody to make changes in the community,” she said. “You could count on him, and you knew his approach was careful and thought-out.”

Kovecsi said at Stewart’s memorial service, attendees celebrated not just what he accomplished — which was a lot — but also his humble approach, with a sense of humor sprinkled in.

“It’s not just what he did — it’s more appreciation for what he was, and how he did it.”

Not to mention that Stewart was tireless.

“He was doing all this when he was in his 70s — that’s the other thing. He kept charging forward,” Morse said.

In their spare time, Stewart and Kay enjoyed traveling in the U.S. and elsewhere, and they were both avid birdwatchers. They had just returned from a three-week road trip to the western U.S. before Stewart passed away.

Kay said the two were also planning to sort their things and move to a smaller home, but Stewart had a hard time getting around to that.

“He just had so many interests,” Kay said. “We talked about sorting things, but he never really got around to much of that, and who wouldn’t rather do things than sort?”

Stewart's commitment sustained itself, and proved universal — he wanted to improve the quality of life for everyone.

“Stewart understood in order to have a really strong community, we needed people to participate. He was a real ally in the effort to make Winona a better community.”

The week's top 10 (or so) in review: WSHS football is 3-0, remembering Stewart Shaw, Rushford wildlife artist, and more

We are all saddened by the sudden death of the vivacious Judee Brone, and appreciate the contributions she made to the communities of Fountain…

Master gardener Stewart Shaw talks about plants during a garden tour of a Home and Community Options house in 2012. Shaw, who died last month at 80, was a champion of several community causes in the Winona area.

Shaw carried an oversized postcard in May 2013 on his way with a group to the state Capitol to discuss frac sand issues. “When he believed in something, he thought about it, got involved, and worked with everybody to make changes in the community,” said his wife, Kay. “You could count on him, and you knew his approach was careful and thought-out.”