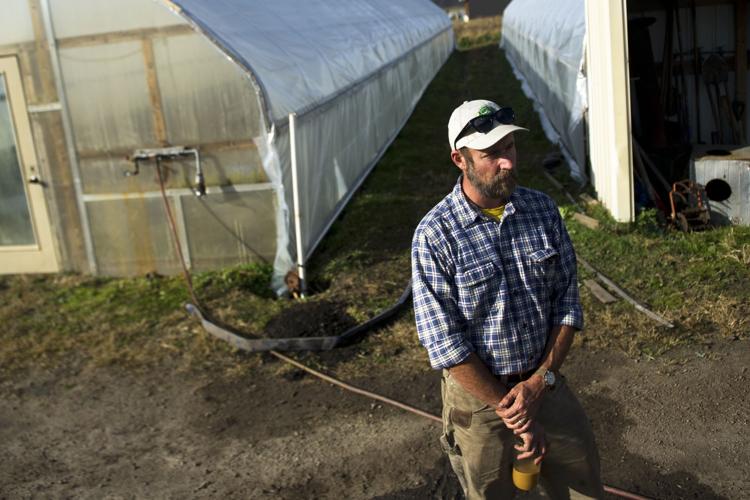 Featherstone Farm owner Jack Hedin discusses the future of the Rushford farm on Monday, after a disastrous growing season has the farm in risk of shutting down. The farm is seeking $150,000 in donations to continue operating. 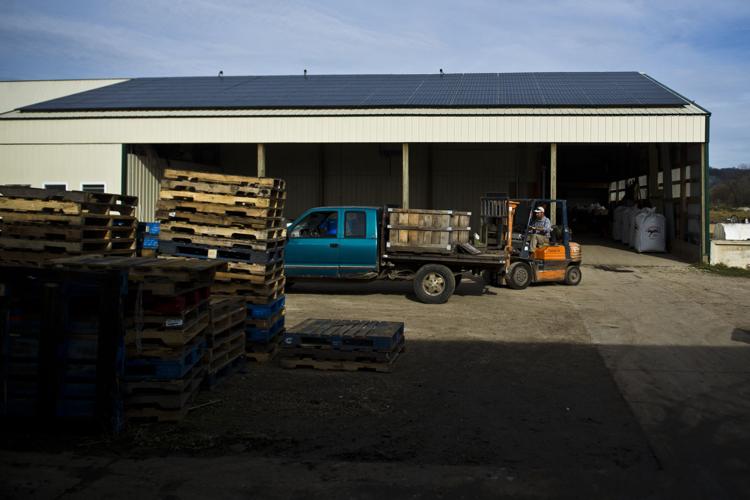 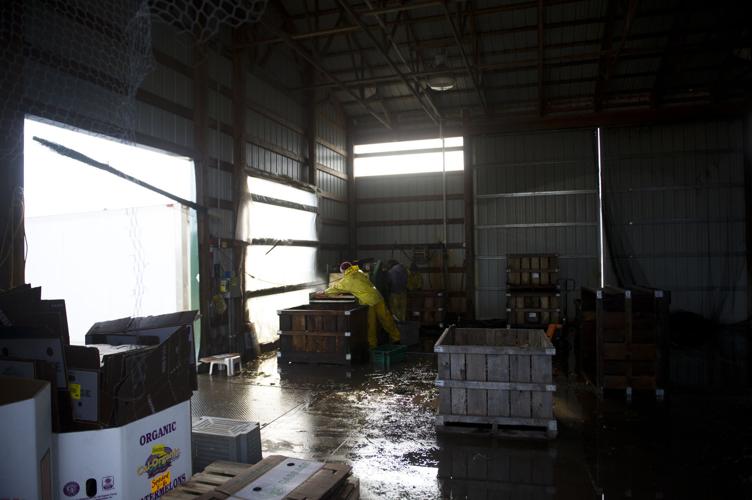 Featherstone Farm employees wash off carrots on Nov. 7. The farm reported great growth in carrots but bad growth in their more profitable vegetables such as cabbage. 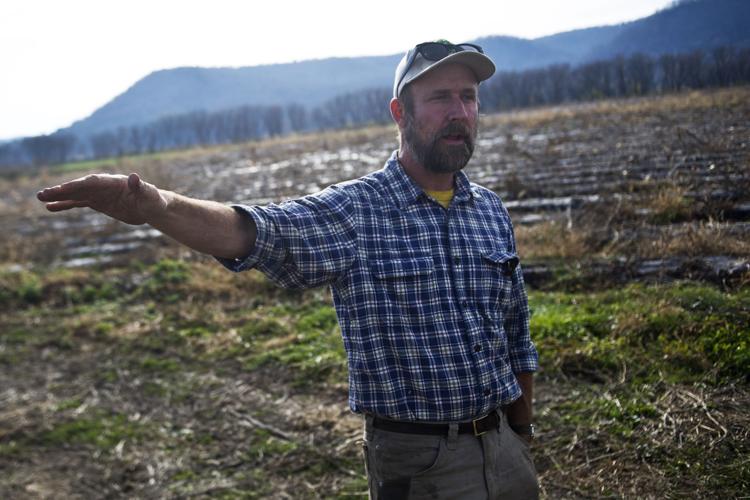 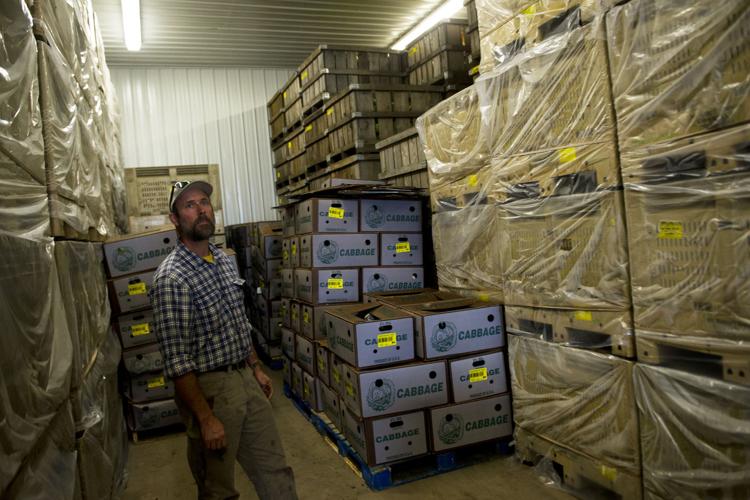 RUSHFORD — Most years, you can grow just about anything here.

At Featherstone Farm, the soil is black and rich and five feet thick, as if a giant knife had spread it across the countryside.

They grow all kinds of fruits and vegetables in this little valley — cabbage and carrots, squash and strawberries — and then load them onto trucks bound for small towns and big cities.

But in this place where a seed can hardly fail to sprout, this year’s harvest has brought only meager returns. Steady rain in the summer never allowed the fields to dry out, leading to the rise of bacteria and the spread of disease that killed dozens of acres of crops at Featherstone.

It was a worst-case scenario, workers say, that has left them to wonder if the farm might collapse.

“An auction sale in March is a real possibility,” said owner Jack Hedin, who founded the certified organic farm in 1997. “This was our worst year ever. It was a catastrophe. It looked like a nuclear wasteland, some of these fields.”

“The community has always supported us,” he said — and so he’s appealing to the community one more time in the hope of raising $150,000 by Thanksgiving to help save the farm.

Donations can be made on the farm’s website or GoFundMe, the latter of which had raised $9,000 days in the first three days of the campaign.

“This is my life’s work,” Hedin said. “We’re going to give this every chance to succeed.”

A way of life threatened

Featherstone supplies fruits and vegetables to natural food stores, wholesalers and locals who pay to receive boxes of produce on their doorsteps.

The farm relies on a diverse assortment of crops to limit the damage in down years, but that strategy could do nothing to prevent a year so bad. Featherstone lost $360,000 in potential sales and became cluttered with stacks of empty crates.

“That’s the thing,” Jennifer Breitlow, an equipment operator, said the other day while spraying the dirt off a new batch of carrots. “You can do just about everything right, but it can still go wrong.”

If Featherstone is forced to shut down, 50 workers will lose their seasonal or full-time jobs — workers in hats and hot fields, workers in rain suits and muddy warehouses.

They stake their futures every year to the weather, knowing the farm and their jobs might be washed away. But there’s a satisfaction in the work, they say, a pride in planting and nurturing and harvesting something that people can’t live without.

“We love what we do,” said Nathan Manfull, who coordinates harvests at the farm. “We would like to keep doing it.”

But as the prospect of losing the farm becomes increasingly real, some of its workers are beginning to consider their options.

Dan Fillius, field production coordinator, left a secure job at Michigan State University two years ago so he could work at Featherstone and be closer to his wife’s family.

If he loses his job at the farm, he said, his family will probably have to move again.

“I understood there would be a risk leaving my old job,” he said, “but this blindsided us.”

“If things don’t work out, I’m sure we’ll all dissolve into different things because we need the money,” Breitlow said. “But we’ve been through a lot together. We’ve seen children born, and we’ve seen death.”

In 2007, when the farm was located in Wiscoy Township, severe flooding wiped out almost everything. The waters did nearly $500,000 in damage and for the first time put the future of the farm in doubt.

With a state loan and money from loyal customers, mostly in the form of pre-payments for produce they would receive years later, Hedin chose to move the farm to its current location in Rushford — just to be safe, he said.

During this second recovery attempt, Featherstone will again receive help from the state and, most likely, from various large donors. Hedin, though, is requesting again that people who receive produce from Featherstone pay now for future shipments.

“This would be the loss of a family farm at a time when family farms are disappearing,” said Steve Nagel, a longtime customer who is volunteering with the fundraising campaign. “This is a way we can help a local farm, a family farm.”

The staff here say they are thankful for the work, because it is keeping their minds busy in the meantime.

Abby Benson, who manages the greenhouses, said one year sort of bleeds into the next when you’re working on a farm.

Featherstone ships produce well into the winter, while workers are already ordering seeds for next year.

In April, they begin planting those seeds in the greenhouses.

And in May, they begin moving those plants out of the houses and into the earth.

“We love what we do. We would like to keep doing it.” Nathan Manfull, harvest coordinator

To save the farm

Donations can be made on the farm’s website or GoFundMe, the latter of which had raised $9,000 days in the first three days of the campaign.

“We love what we do. We would like to keep doing it.”

The top stories of Nov. 7-13: Wrapping up elections; a Winona farm struggles to survive; and more, in your weekly edition of the Daily News' t…

After a rough year, Featherstone Farm will be back in the spring

The story of the Pikovsky family, whose daughter was deported to Aushwitz, traced through letters

NFTs and Web3 take over Miami during Art Week

NFTs and Web3 take over Miami during Art Week

Featherstone Farm owner Jack Hedin discusses the future of the Rushford farm on Monday, after a disastrous growing season has the farm in risk of shutting down. The farm is seeking $150,000 in donations to continue operating.

Featherstone Farm employees wash off carrots on Nov. 7. The farm reported great growth in carrots but bad growth in their more profitable vegetables such as cabbage.