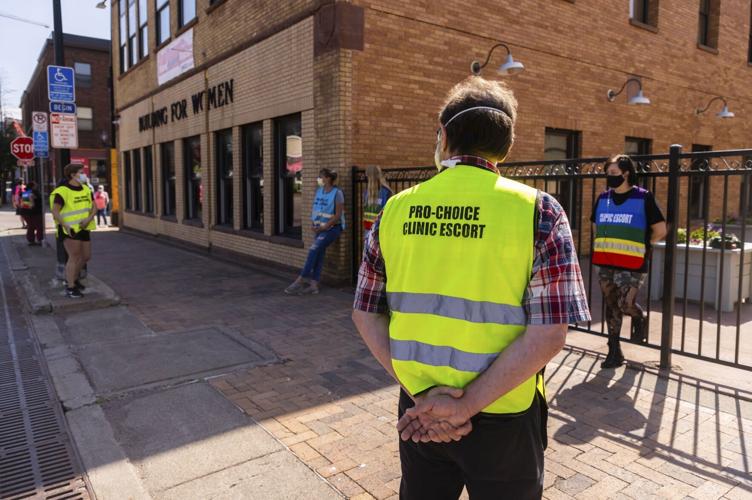 A clinic escort outside WE Health Clinic in Duluth, Minn., awaits the arrival of patients, Thursday, July 7. The clinic escorts protect patients from protesters as they approach and enter the clinic. 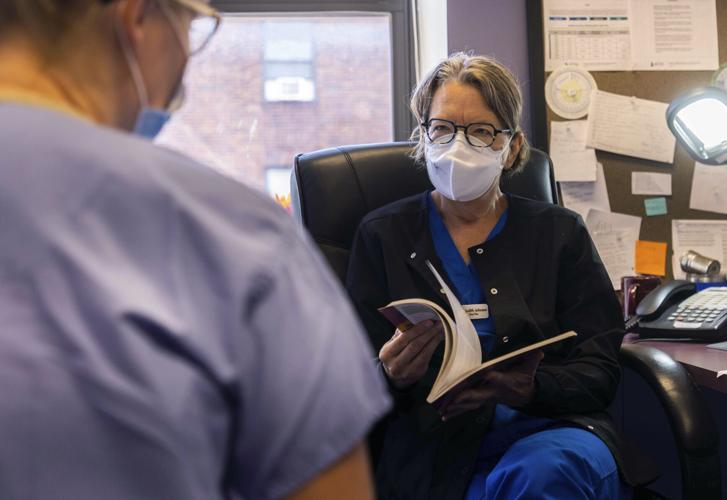 WE Health Clinic obstetrician Dr. Judith Johnson, right, talks with third-year University of Minnesota medical student Rachel Richards, Thursday, July 7, at WE Health Clinic in Duluth, Minn. Richards was on her first rotation and remarked how excited and in love she was with the work she was doing. On this day, Johnson and Richards were talking about abortions between appointments.

DULUTH, Minn. — On the top floor of a modest two-story brick building near the shore of Lake Superior, the executive director of northern Minnesota’s only abortion clinic flits from room to room, checking in patients, fielding phone calls from people seeking appointments and handling billing questions from those struggling to pay.

In the waiting room at WE Health Clinic in Duluth, patients from Wisconsin and Texas sit among Minnesotans — the leading edge of an expected uptick in out-of-state patients following the Supreme Court’s removal of the federal right to abortion.

“It’s just been really busy,” Laurie Casey, the executive director, said. “We’re trying to be as flexible as we can, especially with people coming out of state. A lot of our patients — even if they’re from Minnesota — travel one to three hours each way to get here. So we try to be as accommodating as we can.”

Even before Roe v. Wade was reversed, WE Health Clinic was the nearest abortion provider for some people in northern Wisconsin, northern Minnesota and Michigan’s Upper Peninsula.

Today, the clinic’s employees are acutely aware of their state’s status as an island for legal abortion in the Upper Midwest. Abortion is now illegal or treated as such in Wisconsin and South Dakota. North Dakota is expected to follow suit in late July and Iowa’s Republican governor is asking the state courts to severely limit the procedure.

The clinic has raised its cap on patients from 16 to 20 on the one day a week when abortions are typically performed. Its staff try to schedule abortions on other days when necessary, and may set aside an additional half- or full day each week for abortion services.

“We haven’t overcome our capacity to serve patients yet. And we are working on efficiencies so that we’re ready if we do end up with a flood of patients,” said Dr. Judith Johnson, one of three doctors providing abortions at the clinic.

Johnson said the increased pressure began months before the Supreme Court decision, with inquiries from people in Texas and Oklahoma as those states introduced highly restrictive abortion bans.

The extra patient load at WE Health Clinic includes people who have struggled to get speedy appointments at some Minneapolis-area clinics, where five of the state’s seven abortion clinics are located, following the Supreme Court’s decision. The seventh clinic is in Rochester.

“The number of patients we serve has gone up, and the places they come from have gotten further away,” Johnson said.

And the clinic isn’t able to help everyone who calls.

Cassidy Thompson, a patient educator and coordinator of the clinic’s volunteer patient escort program, recounted a call from a woman in Oklahoma who was “crying to me on the phone, saying, ‘Can’t you help me? No other clinics can take me right now.’” That patient was hoping for a telehealth consultation that would allow her to stay in Oklahoma and still obtain a medication abortion from the clinic.

However, state law requires patients to have a Minnesota mailing address and to be physically in Minnesota when speaking with a doctor.

The “entire purpose of (my) career is to provide abortion care. And to tell someone we legitimately cannot help them with anything, and they are stuck with a forced pregnancy … is just a complete takeaway of power,” Thompson said. “If that would have been a Minnesota resident, we would’ve been able to give them an abortion, no problem.”

Most of the Minnesota patients at the clinic qualify for low-income assistance to help with the cost of an abortion, but it doesn’t cover the full cost of the procedure. Casey estimated that the clinic lost more than $60,000 last year by serving medical assistance patients, a deficit the clinic had to make up through fundraising and grants.

“A lot of doctors’ offices put caps on how many medical assistance patients they might see, but we don’t do that because we really want to provide for people that need it the most,” said Paulina Briggs, the lab supervisor and a patient educator at the clinic.

But out-of-state patients don’t qualify for Minnesota’s medical assistance program. Nor does the clinic help out-of-state patients with travel costs; it doesn’t have the resources, Casey said. All this contributes to financial strain for people traveling across state lines for abortion care.

“It’s just really sad to think about those people,” Briggs said. “Where they live is going to determine the kind of care that they’re going to get. And the people that are most in need of services are going to have the hardest time accessing it.”

Briggs said phones “have been crazy” with calls from people — including nurses, physician assistants and an attorney — wanting to volunteer, help or donate to the clinic, which also offers a range of non-abortion services such as birth control, and breast and cervical cancer screenings.

“The major challenge right now is just financial stability, making sure we have the financial resources to keep our clinic up and running,” Casey said. “It’s just really sad that when I started here in 1981, we didn’t have that many restrictive laws. And now we’ve just gone backwards.”

A 21-year-old Winona man faces robbery and drug charges after an Aug. 7 incident in Winona.

After closing four years ago, the Rollingstone Community School is opening its doors to elementary students once again, thanks to the efforts …

In a race that will result in November with two Winona Area Public School at-large members elected, current board members Nancy Denzer and Kar…

ONALASKA — A Florida developer plans to acquire, remodel and add on to the former Shopko department store at 9366 State Road 16 in Onalaska — …

An arrest warrant has been issued for a 42-year-old man accused of sexually assaulting a young child.

It is likely that you have recently known of folks who have been infected with COVID. The omicron variant BA.5 has become the dominant one in …

This wearable human-machine interface could be the future of devices

‘Return to the Inferno’: Wildfires rage in southwest France

‘Return to the Inferno’: Wildfires rage in southwest France

Massive models of planets light up at Czech planetarium

Massive models of planets light up at Czech planetarium

A clinic escort outside WE Health Clinic in Duluth, Minn., awaits the arrival of patients, Thursday, July 7. The clinic escorts protect patients from protesters as they approach and enter the clinic.

WE Health Clinic obstetrician Dr. Judith Johnson, right, talks with third-year University of Minnesota medical student Rachel Richards, Thursday, July 7, at WE Health Clinic in Duluth, Minn. Richards was on her first rotation and remarked how excited and in love she was with the work she was doing. On this day, Johnson and Richards were talking about abortions between appointments.