Become a Member
Read Today's E-edition
Share This
Love poems for bears, mountains, everyone
0 comments
Share this
1 of 2 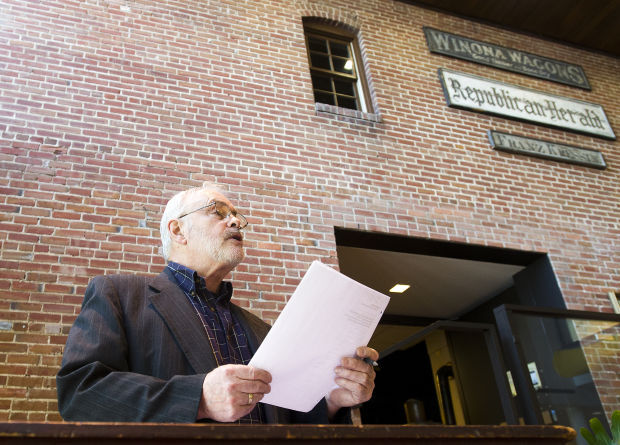 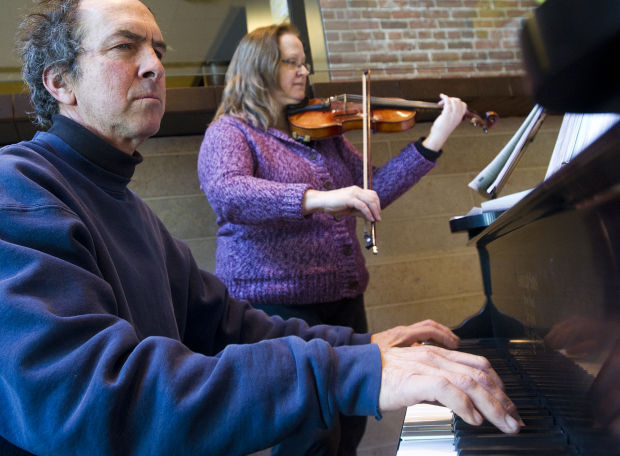 Mark McGuire, left, on the piano and Betsy Neil on the violin practice for the upcoming Heartsongs with Ken McCullough event Tuesday, Feb. 11, 2014, at the Winona County History Center in Winona.

Soft piano music echoed in the lobby of the Winona County History Center. A bowl of candy hearts with cutsie messages sat at the reception counter. At the other end of the room, Ken McCullough, former poet laureate of Winona, stood at the podium and whistled along, looking wistfully out the window at the afternoon sun.

McCullough was rehearsing for his Thursday performance of love poems, “Heartsongs,” just in time for Valentine’s Day. Betsy Neil, a teacher and musician, will accompany the works on fiddle. Mark McGuire, a farmer in Pleasant Valley, was on the history center’s 1884 Steinway piano.

Over the course of his life, McCullough has experienced many Valentine’s Days.

He found them “generally disappointing.”

“In my own life, part of what I always enjoyed was flying too close to the flame,” he said.

As part his artist initiative grant from the Minnesota Arts Board, McCullough had to present a capstone event drawing from 45 years of his career as a published poet. The deadline: March 14.

Valentine’s Day, he said, jumped out at him from the page.

“Almost all poems are about love in one way or another,” he said. McCullough’s poems focus on love in a different vein.

At the podium, McCullough shuffled his papers and began a recitation of “The Red and Black,” a poem about three of his great loves: winter, the Upper Midwest and bears. In fact, very few of his poems are all that “romantic” in the candy-heart sense of the word.

“If you were to look at them, you would say, ‘these don’t remind me of Shakespeare’s sonnets,’” he said.

Most of them, he said, began not with a feeling, but a place.

One poem in particular focuses on McCullough’s time among the mountains and the people of Montana.

“The poem incorporates my love of Montana—particularly the mountains,” he said, “and the bars at that time in my life were places of worship.”

Other poems were about McCullough’s sons, his neighbors or his complicated relationship with his father. A few were about lovers — former lovers, lovers who passed away.

Finding the right music to pair with McCullough’s eclectic swath of love poems proved to be a challenge that all three performers attacked together.

“At first we wanted to use familiar music, all love music,” Neil said. “That didn’t work.”

The familiar melodies were too distracting. The atmosphere wasn’t quite right. It just didn’t “fit.”

Instead, the three chose a rainbow of musical pieces from everything form Vivaldi to Charlie Chapman to Lou Reed. For every poem, for every kind of love, a different song was chosen.

Valentine’s Day has since become more significant to McCullough. He married playwright Lynn Nankivil 10 years ago at age 60.

On Valentine’s Day, Neil will be having dinner with her husband of 36 years. McGuire plans to spend some time on the farm, milking cows. McCullough and his wife will be flying to North Carolina to celebrate his mothers’ 97th birthday — which is another kind of love.

The event is free and open to the public

Is this the world's first fully robotic AI café in the world?

Is this the world's first fully robotic AI café in the world?

Mark McGuire, left, on the piano and Betsy Neil on the violin practice for the upcoming Heartsongs with Ken McCullough event Tuesday, Feb. 11, 2014, at the Winona County History Center in Winona.