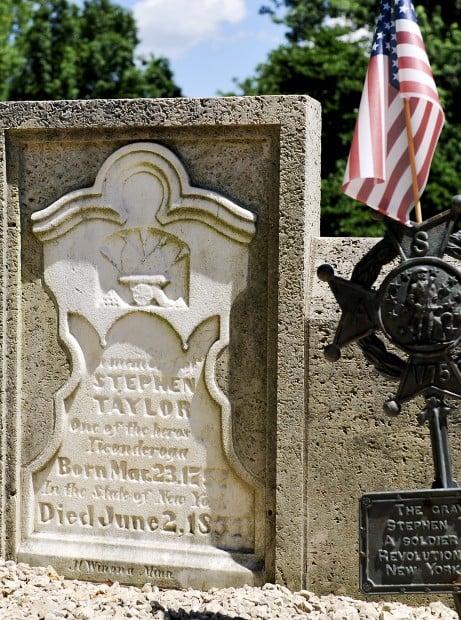 When Taylor died in 1857, he was originally buried in an unmarked grave in a country cemetery, then in Woodlawn. In 1880, the cemetery�s caretaker paid to have this gravestone built. (David Ranzenberger/Winona Daily News) 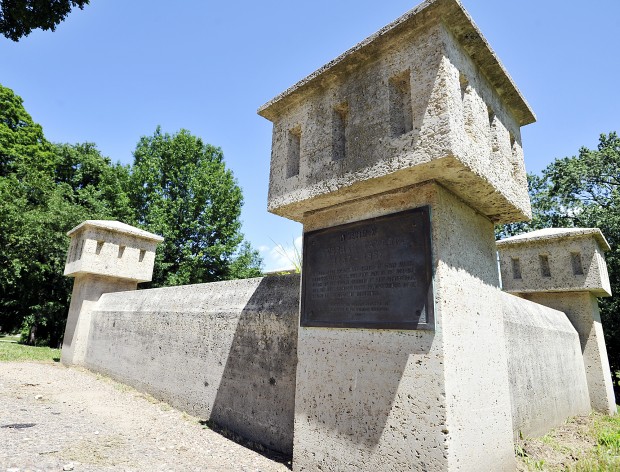 The grave of Stephen Taylor, the only known Revolutionary War soldier buried in Winona, is in Woodlawn Cemetery. His gravesite is designed to resemble Fort Ticonderoga, where he may--or may not--have fought alongside Ethan Allen during the famous 1775 raid of the fort. (David Ranzenberger/Winona Daily News)

The Revolutionary War may not have reached Winona soil, but a small piece of its history is buried in it.

The grave of Stephen Taylor, a soldier who fought under George Washington in the war and later moved to Minnesota, is in Winona’s Woodlawn Cemetery.

He is the only soldier from the war laid to rest in Minnesota.

Historical accounts dispute much of Taylor’s life. He may or may not have been a part of Ethan Allen’s famous 1775 raid on Fort Ticonderoga. It’s not clear when he was born. He may have lived to be 89. Or 100.

All accounts agree that he was a volunteer in the Massachusetts army during the war, then came to Minnesota for the final years of his life.

In a 1972 article published in the Daughters of the American Revolution magazine, Minnesota historian Estella Frank wrote that “Taylor enlisted at the age of 15 and died at the age of 100. He served under Captain Ethan Allen at Fort Ticonderoga.”

Frank admits in the article that there is no official record of his service with the unit, but that Taylor would have been one of 50 or so soldiers unaccounted for in the record.

James A. Sheehan at Winona State College investigated Taylor’s life and wrote a detailed biography of Taylor in 1964 for his master’s thesis. He was unable to link Taylor to the attack on Fort Ticonderoga, and his research raised doubts that Taylor was old enough to have fought with the New York militia or at Ticonderoga.

Both Sheehan and Frank, however, were able to confirm Taylor served in the First Massachusetts Regiment in 1781. The regiment of regular infantry served under Gen. Washington during the war, and Taylor was an acquaintance of the general.

Taylor served honorably for three years and was discharged at West Point in 1783. He returned to his home in Massachusetts and sometime after 1790 moved to New York.

In 1818, he applied for a soldier’s pension in New York. The pension, which was approved for $8 a month, listed Taylor’s age as 52.

That meant Taylor would have been 9 during the time of the raid on Fort Ticonderoga, and 91 when he died in 1857 — contradicting Frank’s findings and the grave markers that say he was born in 1757.

Taylor moved around the state of New York many times until 1854, when he made the longest move of his life — to Money Creek in the Minnesota Territory.

Sheehan claims that Taylor made the long journey so late in life because of strong ties to his son, Edward, an adventuresome spirit, and the desire to acquire new land.

A year after his arrival in Minnesota, Taylor claimed and was granted 160 acres of “bounty land” — acreage the government gave to men who served their country during the war.

Taylor never lived on the land. Two years later, in 1857, he died on his son’s farm after a short illness.

Taylor was originally interred at Prairie Cemetery, 20 miles southwest of Winona. He was moved to Woodlawn in 1865 and buried in an unmarked grave.

In a letter published in the Winona Daily Republican in March 1879, the writer noted that Civil War soldiers buried in the cemetery were given grave stones while Taylor’s plot remained bare.

“There is one — and I believe only one — soldier of the Revolutionary War buried in this county —  Stephen Taylor — who was in the service of the Government for seven years. Will not the Government or somebody else place a stone at his grave?” the letter reads.

Capt. Mathew Marvin, a Civil War veteran and the superintendent of Woodlawn, took heed. He furnished a gravestone for Taylor at his own expense, and it was dedicated on Memorial Day in 1880, where Mayor Abner Hodgins read the inscription on the stone:

In the early 1900s, the newly formed Wenonah Chapter of the Daughters of the American Revolution assumed maintenance of Taylor’s grave. They bought a perpetual-care contract from the cemetery, and each year decorate the grave with flowers.

In 1933, with the help of donations from local businessmen, the organization created a new gravesite for Taylor, featuring a stone model of Fort Ticonderoga, along with the original grave stone and bronze plaque that reads:

“A courageous soldier, member of Ethan Allen’s immortal band of ’83 who took part in the surprise attack on the British garrison at Ticonderoga and the only Revolutionary War soldier known to be buried in the State of Minnesota.”

A former Winona State University football player has gained national fame for a reason other than sports: a quest for love.

When spouses’ strengths even out their counterparts’ weaknesses, no dream is impossible as a team. At least, that seems to be the case for Min…

The following person has been charged with a felony in La Crosse County Circuit Court:

A rural Chippewa Falls man has been arrested for his eighth drunken-driving offense, less than two months since he was charged with his sevent…

Here’s a guide to this weekend’s area events:

One person was injured after a single-vehicle crash on Interstate 90 in Winona County.

More than one visitor now allowed at Winona Health facilities

Visitor rules have changed at Winona Health now that COVID-19 concerns are lowering within Winona County.

When Taylor died in 1857, he was originally buried in an unmarked grave in a country cemetery, then in Woodlawn. In 1880, the cemetery�s caretaker paid to have this gravestone built. (David Ranzenberger/Winona Daily News)

The grave of Stephen Taylor, the only known Revolutionary War soldier buried in Winona, is in Woodlawn Cemetery. His gravesite is designed to resemble Fort Ticonderoga, where he may--or may not--have fought alongside Ethan Allen during the famous 1775 raid of the fort. (David Ranzenberger/Winona Daily News)