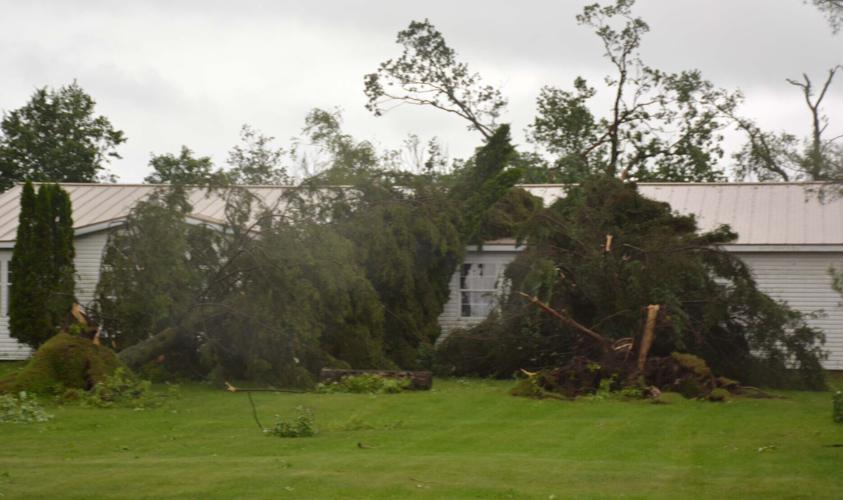 Two trees were blown against a house on Hwy. PP in the Town of Byron. 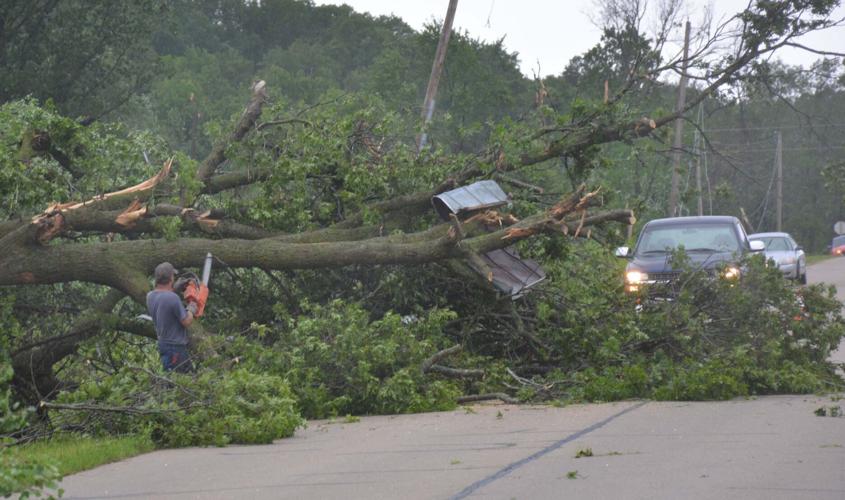 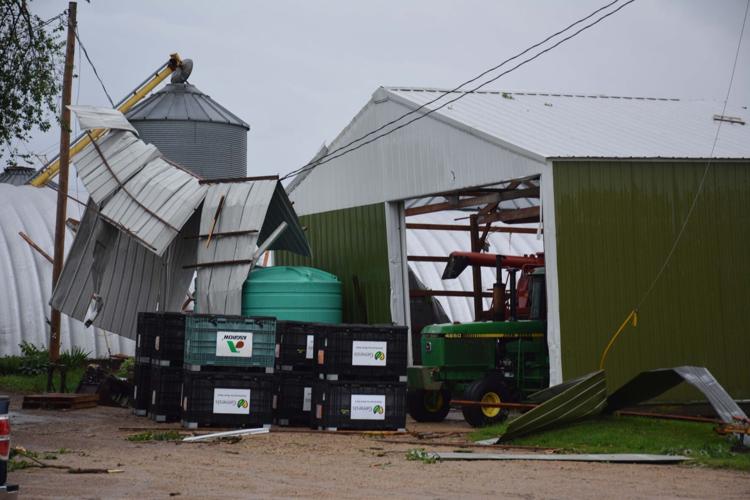 A shed sustained damage in the town of Oakdale. 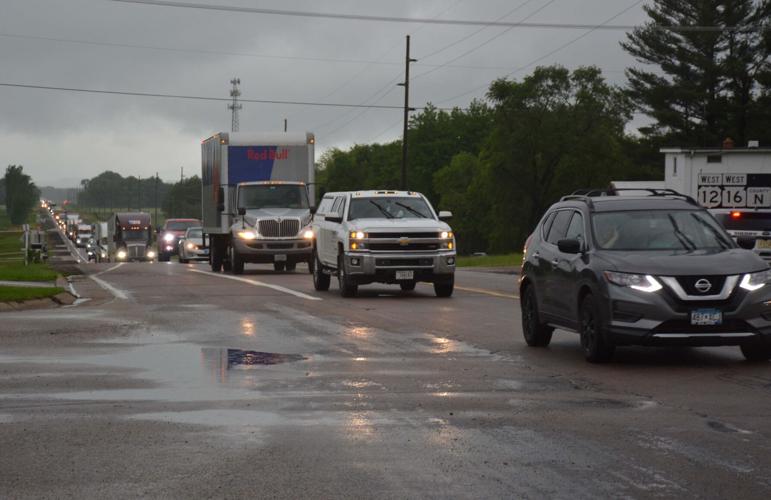 A storm-related crash on Interstate 90 sent a long line of traffic through Oakdale. 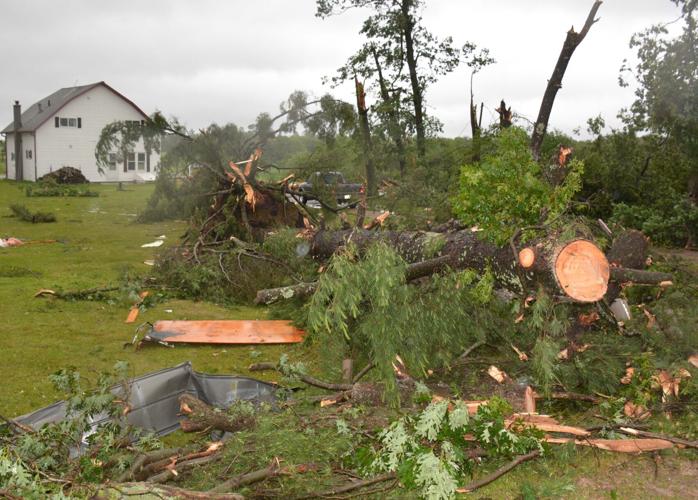 A property on Hwy. PP near Hwy. 21 sustained significant damage. 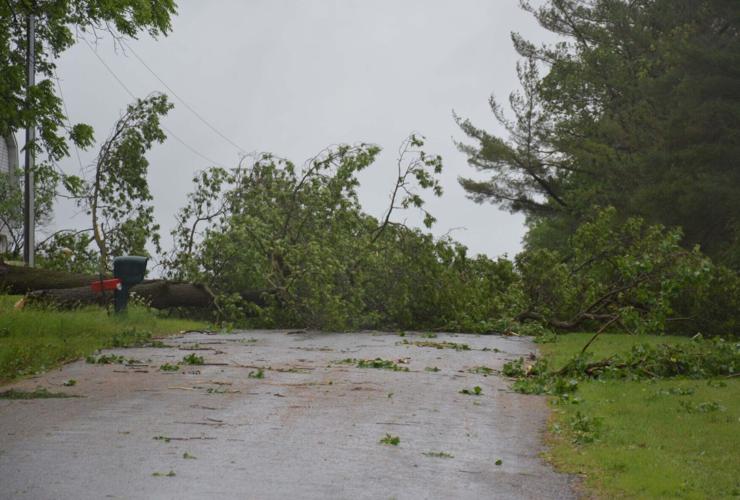 A downed tree creates a roadblock on Franklin Road in the town of Byron. 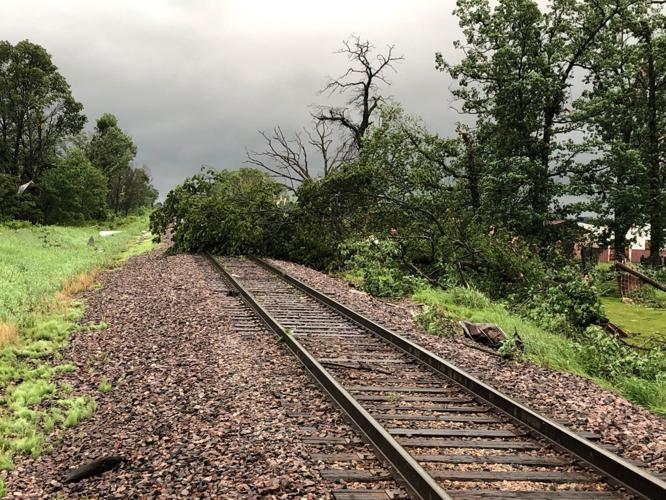 A tree blocks a railroad track that runs parallel with Hwy. 21 in the town of Byron.

Among a system of powerful storms that swept across Wisconsin on Wednesday, at least two confirmed tornadoes touched down in Monroe County, leaving behind substantial damage.

The two tornadoes hit within about 30 miles of each other and less than an hour apart. The National Weather Service confirmed that an EF-2 tornado hit near Tomah shortly after 4 p.m., and an EF-1 tornado hit near Mauston at about 4:45 p.m.

Crews were also evaluating damage in Vernon County near La Farge and Hillsboro to determine whether a tornado hit, but nothing was confirmed as of Thursday afternoon.

No injuries or deaths have been reported from the storms, officials said.

According to the Monroe County Sheriff's Office, the tornado that hit Tomah appears to have traveled northeast from Hwy. 131 and Hwy. A for about 15 miles before leaving Monroe County north of Shennington.

The tornado took down multiple trees, power lines and barns, and damaged several homes. The county reported widespread power outages. Multiple semis were blown over onto their sides, causing Interstate 90-94 to be shut down for more than three hours. Traffic was detoured on Hwy. 12-16 through the Village of Oakdale.

The tornado was described as "large and extremely dangerous" by the NWS, and it was "rain-wrapped," making it difficult to see. Debris was seen lofted on the radar.

According to preliminary local storm reports, the area was also hit with hail up to an inch in diameter and winds capable of ripping bark off of trees and shingles off of roofs, though NWS said the storm didn't produce much hail.

Almost simultaneously, a tornado watch was also issued for northeastern Vernon County near La Farge and Hillsboro until 4:45 p.m., and for the Mauston area until 5 p.m.

Damage was reported at the Mile Bluff Medical Center in Mauston, which resorted to using backup power due to the storm, according to officials. NWS crews were on the ground in Mauston Thursday morning evaluating the storm.

The Mauston tornado reached wind speeds up to 90 miles-per-hour and was up to 150 yards wide.

Law enforcement is asking people to avoid traveling in the storm-damaged areas as many roads remain impassible and crews are working to get them back open.

The severe weather moved out of western Wisconsin by about 6:45 p.m., moving into the eastern part of the state, where damage was also done.

As of Thursday morning, about 38,000 We Energies customers lost service from Bonduel south to Milwaukee.

In Outagamie County, executive Tom Nelson said some rural roads were impassable, urging commuters to take extra time while traveling and to "be safe."

Crews with the Green Bay Metro Fire Department responded to about 150 calls for service in their area, including calls for downed power lines, damaged poles, gas leaks and damage to homes.

About an inch to and inch-and-a-half of rain fell across Vernon, Monroe, La Crosse and Jackson counties on Wednesday, adding to what was already a wet week.

As of Thursday morning, the La Crosse River had reached 7.45 feet, hovering at a minor flood stage. The Lemonweir River in New Lisbon was reported at 7.7 feet, which is in the "action" flood stage.

The Kickapoo River in Vernon County was on the rise but hadn't yet reached flood stage.

This story was updated at 2:30 p.m. Thursday morning to include the confirmation of a second tornado and the ratings. Any storm photos, videos or reports can be sent to news@lacrossetribune.com.

Two trees were blown against a house on Hwy. PP in the Town of Byron.

A shed sustained damage in the town of Oakdale.

A storm-related crash on Interstate 90 sent a long line of traffic through Oakdale.

A property on Hwy. PP near Hwy. 21 sustained significant damage.

A downed tree creates a roadblock on Franklin Road in the town of Byron.

A tree blocks a railroad track that runs parallel with Hwy. 21 in the town of Byron.