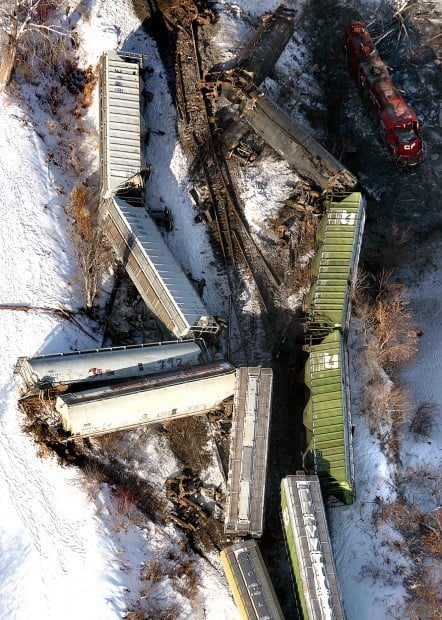 Two Canadian-Pacific trains lie in ruin after they collided Wednesday morning near the Interstate 90 exit north of Lock and Dam No. 7 in Dresbach. Nobody was seriously injured in the early morning train wreck that sent a locomotive into the Mississippi River. The cause of the collision is under investigation. 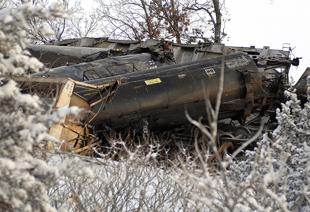 A tanker leaked liquid fertilizer after two trains collided in December 2008 near the Interstate 90 exit north of Lock and Dam No. 7 in Dresbach.

Investigators have ruled human error as the cause of the December freight train collision near Dresbach, Minn., that derailed 26 cars, sent a locomotive into the Mississippi River and caused more than $1.5 million in damage, according to a Federal Railroad Administration report.

A Canadian Pacific train of two locomotive engines and 15 loaded freight cars failed to comply with an automatic block or interlocking signal telling it to stop at 4:48 a.m. Dec. 17, the accident/incident report states. It slammed into a larger Canadian Pacific train of three locomotives and 100 cars at nearly 47 mph. Drug and alcohol tests for each train's conductor and engineer came back negative, the report states.

Canadian Pacific declined to comment on the report. Spokesman Mike LoVecchio said the company was complying with a federal investigation into the crash and reserved comment until a full report is released.

FRA officials did not return a call for comment Monday. The agency's Web site says the accident investigation report is pending.

The recently released incident report gives a fuller account of the events leading up to the crash. The larger train was positioned on a siding - a stretch of tracks flanking the main line that allow one train to pass another - when it received a clear signal. The train started merging onto the main line and was traveling west at about 20 mph when the smaller train struck it.

The impact sent one of the smaller train's locomotives into the Mississippi River and left tracks strewn with the wreckage of mangled railroad cars. It also ruptured a 1,000 gallon propane tank used to heat a switchbox and prompted the evacuation of the nearby veterans home. The crash caused more than $940,000 in damage to the trains and nearly $600,000 in damage to that portion of the tracks, the report states.

The conductor and engineer in the locomotive that plunged into the river had minor injuries and were taken to a local hospital, where they were released later that day. The 21-year-old conductor suffered a contusion on his lower back that kept him from working the next 36 days, according to a railroad injury and illness summary related to the crash.

Both crews had been working for less than the 12-hour federal limit at the time of the collision. The smaller train's crew had been on duty for 9 hours, 48 minutes, while the larger train's engineer and conductor had worked for 10 hours, 33 minutes.

The cause ruling falls in line with national trends. Human errors were the leading cause of train crashes in 2008, with 36 percent of incidents, according to information on the FRA Web site.

Two more cases of COVID-19 identified in Winona County; total now up to 4

Two more people have tested positive for COVID-19 in Winona County, raising the total to four since the first cases were announced Wednesday, …

Two people have been diagnosed with COVID-19 in Winona County, the first cases for the county as the disease continues to spread throughout th…

Winona Health is taking yet another step to help fight the battle against the quickly spreading COVID-19. Now, the organization offers a free …

Two Canadian-Pacific trains lie in ruin after they collided Wednesday morning near the Interstate 90 exit north of Lock and Dam No. 7 in Dresbach. Nobody was seriously injured in the early morning train wreck that sent a locomotive into the Mississippi River. The cause of the collision is under investigation.

A tanker leaked liquid fertilizer after two trains collided in December 2008 near the Interstate 90 exit north of Lock and Dam No. 7 in Dresbach.
© Copyright 2020 Winona Daily News, 279 E. Third St., Suite 370 Winona, MN | Terms of Use | Privacy Policy
Powered by BLOX Content Management System from TownNews.com.
You don't have any notifications.