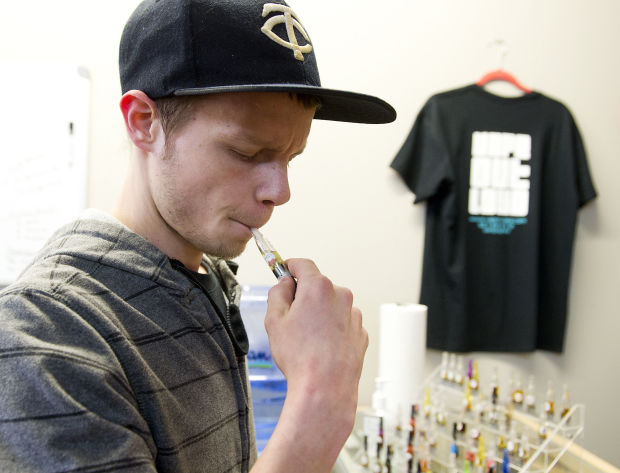 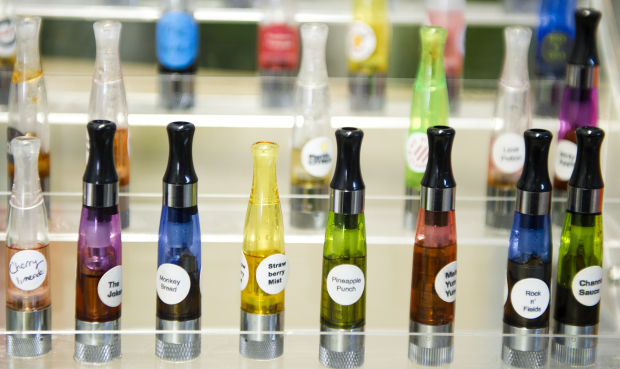 A variety of flavors is one of the draws to using e-cigarettes instead of traditional tobacco products, though there's no substantial research that shows they are less harmful than traditional cigarettes. The Minnesota Legislature is debating how to regulate the substance.

Things are heating up in Minnesota over e-cigarettes.

Recent proposals at the state Legislature have proposed lump them together with tobacco in the eyes of the Clean Indoor Air Act, meaning users couldn't smoke in public indoor spaces. Other proposals would restrict them from state-owned buildings and schools. Nearly all would ban sales to anyone younger than 18.

That’s something that David Delsing, owner of Vapor Vibes in downtown Winona, already does.

“We ask for IDs for everyone who looks 30 or younger,” he said.

Delsing, whose business has been open in Winona a little less than a year, limits his clientele based on both his tobacco license and his own personal policy. The liquid nicotine solution, or “e-juice,” comes in a variety of tasty flavors from strawberry to almond, but Delsing would never want the option to sell to younger consumers.

“Because it’s nicotine,” he said.

E-cigarettes have mainly been marketed as a safer alternative to traditional cigarettes. But when it comes to e-cigarettes, a lot remains—in a word—nebulous.

They contain nicotine, but not other chemicals and carcinogens contained in cigarettes. Research hasn’t determined whether they're safer than tobacco products, and both states and the federal government are taking hard looks at how to regulate them.

To Delsing, strictly regulating e-cigarettes before the results are back from the research lab would be premature.

“It seems like it makes little sense to ban them without scientific proof,” he said.

Delsing used to smoke tobacco products himself, but quit a little more than a year ago with the help of e-cigarettes.

“There are a lot of people who this has helped to quit smoking,” he said.

Joe Wind, a cook at pair of Winona restaurants, said he hasn’t had a tobacco cigarette in a month-and-a-half—not since he started smoking e-cigarettes.

Smoking e-cigarettes also means that he can still smoke with his friends, many of whom still use tobacco cigarettes.

As far as Wind's concerned, the new legislation won’t change his habits much.

“We still don’t smoke inside,” he said. “There’s currently no legislation against smoking inside, but we just decide not to.”

Pending scientific studies aside, Wind sees smoking outside as just a common courtesy, no matter what happens in the legislature.

“I don’t think it’s going to stop people from using e-cigs,” he said.

It certainly won’t stop Delsing from selling them.

“I’m going to keep doing what I’m doing,” he said.

E-cigs not a big issue at WSHS

Winona Senior High School assistant principal Dave Anderson said Tuesday that e-cigarettes have not been an issue at the school, saying he could only recall two or three incidents involving students using them in the building or on school grounds.

Even before the proposed legislation was on the table, Anderson said, school administrators had already planned to update the wording in the school handbook to expressly address e-cigarettes. The new policy will treat e-cigarettes just like it currently treats traditional cigarettes, he said.

The current policy bans the use or possession of tobacco or tobacco-related devices in school, on school grounds, in school-owned vehicles, and at any school events or activities.

Biden: 'Prepared to negotiate,' on infrastructure

Biden: 'Prepared to negotiate,' on infrastructure

The new Winona Family YMCA facility has been open for close to four months now, and business is possibly the best it’s ever been.

A variety of flavors is one of the draws to using e-cigarettes instead of traditional tobacco products, though there's no substantial research that shows they are less harmful than traditional cigarettes. The Minnesota Legislature is debating how to regulate the substance.